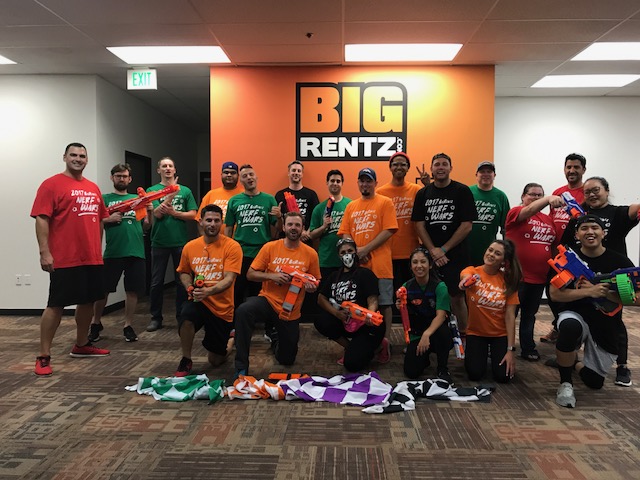 A few of the participants from the 2017 BigRentz Nerf War. Black Team reigned victorious in this year’s competition.

BigRentz team members took part in the equipment rental company’s third annual Nerf War on Wednesday night. As with all BigRentz tournaments, the Nerf battle was extremely competitive and had participants preparing for weeks. Competitors brought a multitude of Nerf guns, thousands of darts, and countless other tools for the tournament.

There were four teams that competed in the Nerf War, denoted by different colors. Black Team was headed by CTO Liam Stannard, Green Team was under the command of CEO Scott Cannon, Orange Team was led by Board Chairman Dallas Imbimbo, and Red Team was co-captained by VP Finance Neta Etemad and VP Sales Brian Weaver.

The rules were simple: capture the other team’s flags, protect your own flag, and don’t get shot. The first team to be able to obtain all flags would be named the winner. 2017’s game contained a new “respawn” feature. Respawn allowed shot players to get back in the game after a five-minute time-out period. This new concept seriously upped the ante of the tournament and definitely increased the competitiveness of the players. 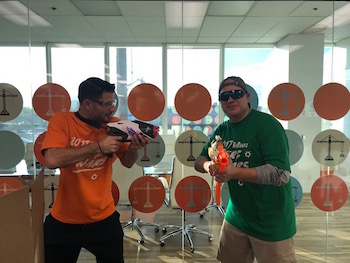 Team Captains Dallas Imbimbo (left) Scott Cannon (right) get into the competitive spirit before the start of the game.

This year’s Nerf War was fast-paced and exciting. Each team developed a strategy to steal their opponents’ flags, set up barricades, and designated defensive and offensive players. It seemed that Red Team would take the championship early on in the game. Orange Team did start to gain on them and was encroaching on their flags’ location. However, in an upset at the very end of the game, Black Team came back and was able to obtain all flags.

While Black Team earned bragging rights (which they’ll undoubtedly use for months), Nerf Wars are always a great opportunity for the BigRentz team to bond and build even better connections with their colleagues. While it’s still a year away, BigRentz staff is already anticipating next year’s game.