Crane Shots: How to Add Instant Drama to Any Image 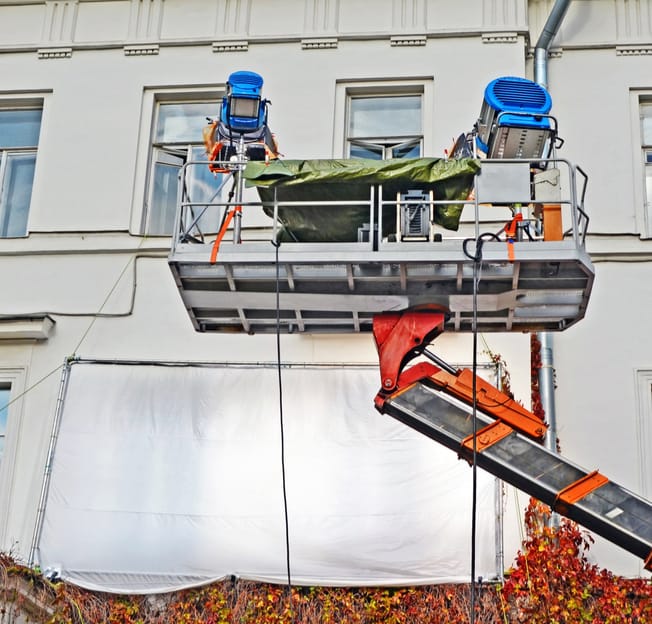 Crane shots, also called aerial shots or jib shots, are some of the most recognizable camera angles in Hollywood. A crane shot is achieved with a camera mounted on a platform, connected to a mechanical arm, and controlled by a camera operator. It can lift the platform up, bring it back down, or move it laterally.
Many filmmakers use articulating boom lifts, telescoping boom lifts, or scissor lifts instead of cranes. A boom lift or a scissor lift allows people to film up to 180 feet above the ground without the noise of a helicopter. Some people use jibs with only the camera on the end, and the camera operator stays on the ground. You can also operate some cranes and boom lifts by remote control.
Crane shots are often wide and dramatic, and they can make any movie or TV show look grand and impressive. They’re often used to show landscapes or large crowds at concerts. Movies can end with a crane shot that moves up and away from the actors and actresses. Some filmmakers use boom lifts to make moving the camera from scene to scene easier.

The History of Crane Shots

Filmmakers came up with crane shots before the invention of the crane. In 1916, D.W. Griffith built a two-story, mobile, counter-balanced elevator tower for “Intolerance.” The camera could go up and down the wooden tower and film from a variety of camera angles. In the 1930s, Busby Berkeley used crane shots in his musicals to give viewers an aerial view of the elaborate choreography and its many geometric shapes and patterns.
One of the most famous crane shots is from “Touch of Evil,” a 1958 movie by Orson Welles. Viewers see a man put something in the trunk of a car, and then the crane’s camera follows a couple as they drive the same car to a theater. The suspense builds until the car explodes and people realize that the mysterious man placed a bomb in the vehicle.
For a more modern example of a crane shot, watch the first episode of “The Walking Dead.” When Rick rides his horse into Atlanta, the camera zooms out to show a devastated, deserted city, emphasizing the magnitude of the zombie apocalypse.

Scissor lifts are narrower than many other types of lifts and cranes so that they can fit through doors and between buildings and other obstacles. They get their name because the mechanisms that raise the lift platforms look like several sets of interlocking scissors.
You can use an electric scissor lift indoors without worrying about carbon monoxide or other pollutants, and many diesel models can travel over mud, snow, steep hills, and other rough terrains. Some models can lift more than 1,000 pounds of weight. These lifts can carry a director and a cinematographer as well as a camera operator. Some models also have nonmarking tires so that they won’t damage wood, tile, or marble floors.
However, scissor lifts can’t swing from side to side for lateral shots like boom lifts. Operators can move the base only and move the lift up and down. As a result, the scissor lift has to be directly below the position from which you want to film. Scissor lifts from 19 to 50 feet high are available.

Articulating boom lifts are also called cherry pickers or knuckle lifts. They’re often used to trim trees or pick fruit. They have knuckles, places between the base and the platform that can bend to go up and over a building or another obstacle.
Articulating boom lifts can move their platforms back, forward, up, down, and to the sides without moving the base. They can run on diesel fuel, gas, or electricity, and they range from 30 to 150 feet tall. Most models have four-wheel drive and an extra jib that can extend the platform another 6 feet in any direction. They work well in crowded places or spaces without a wide path for the base, and they can lift up to 500 pounds.

A telescopic boom lift, also called a straight mast boom lift, has a single straight arm without the hinges or knuckles on an articulating boom lift. They’re the tallest types of aerial work platforms, and models from 40 to 180 feet high are available. People can operate telescopic boom lifts while they’re on the platform, unlike most other lifts that need another person at the bottom to move them up, down, or from side to side. They’re usually diesel or dual fuel, and many models are too big for indoor jobs, even in well-ventilated areas.
The boom extends like a telescope, and the base is stable. This stability makes it ideal for rough terrain or bad weather. However, you shouldn’t use any aerial work platform in high winds or lightning.

The Benefits of Renting Lift Equipment

The largest, tallest boom lifts cost more than $50,000, and you would have to pay for storage, maintenance, repairs, and insurance. If you use crane shots to film a variety of scenes, the same boom lift or scissor lift won’t work for them all. Some equipment is too large to fit inside buildings or between obstacles, and some diesel or dual-fuel models make too much noise for scenes without music or sound effects. When you rent equipment from BigRentz, you can get the equipment transported to your production site for you.
You can rent for an eight-hour day, a month, or a longer time. If you decide a boom lift or scissor lift isn’t suitable for your crane shots, you can exchange it for another one.
BigRentz can help you decide which equipment could be best for the crane shots you want to capture and help workers learn how to operate that equipment safely. All the available boom lifts and scissor lifts come with full operation and safety manuals so that beginners can learn how to use them and what safety equipment they’ll need to make sure your production goes as smoothly as possible.

Articulating vs. Telescoping Boom Lifts: What's the Difference?
How Versatile Is a Telehandler?
Smooth Roller or Padfoot Roller: Which Is Better?
How to Use a Pallet Jack: A Step-by-Step Guide
6 Different Excavator Types & Their Uses on the Construction Site
×
Enter jobsite location to see local rates:
Use Current Location
Processing...