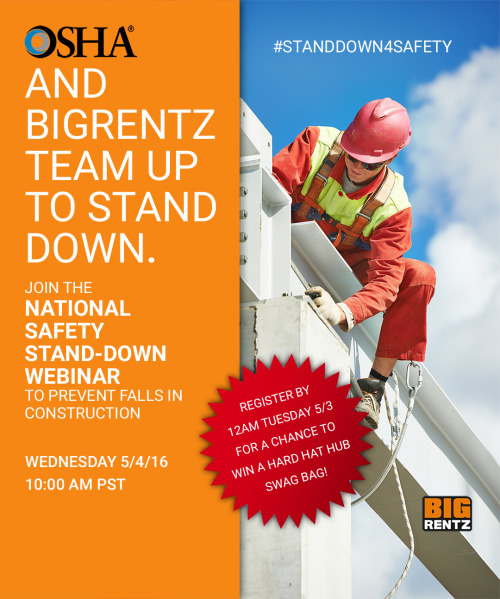 BigRentz pairs up with OSHA for Stand Down for Safety

BigRentz, the nation’s leading network of online equipment rental, is teaming up with the Occupational Safety and Health Administration (OSHA) to co-host a nationwide webinar to bring awareness to the severity of falls in the construction industry.

The free webinar will take place on Wednesday, May 4, 2016, at 10:00 a.m. PDT in participation with OSHA’s 2016 National Safety Stand-Down campaign. Herman Jett of Cal/OSHA and Mike Aguirre of BigRentz will be shedding light on the frightening statistics of injuries and deaths caused by falls, while sharing resources and tools to help fall prevention.

The National Fall Prevention Stand-Down is a Department of Labor campaign organized in an effort to raise awareness of preventing fall hazards in construction. According to the Federal OSHA, “Fatalities caused by falls from elevation continue to be a leading cause of death for construction workers, accounting for 337 of the 874 construction fatalities recorded in 2014 (BLS preliminary data).” Last year’s Stand-Down reportedly reached more than 2.5 million workers.

Dallas Imbimbo, CEO of BigRentz, says the company “is determined to help steer the industry in a direction with safety at its core.” In an effort to do so, BigRentz has partnered with companies to offer training and safety solutions to their network. “We’re actively seeking new opportunities to build a safer culture for our community of customers and partners,” Imbimbo added.

The webinar is free and open to the public. Participants will be able to download a Certificate of Participation signed by Secretary of Labor Thomas E. Perez following the Stand-Down.