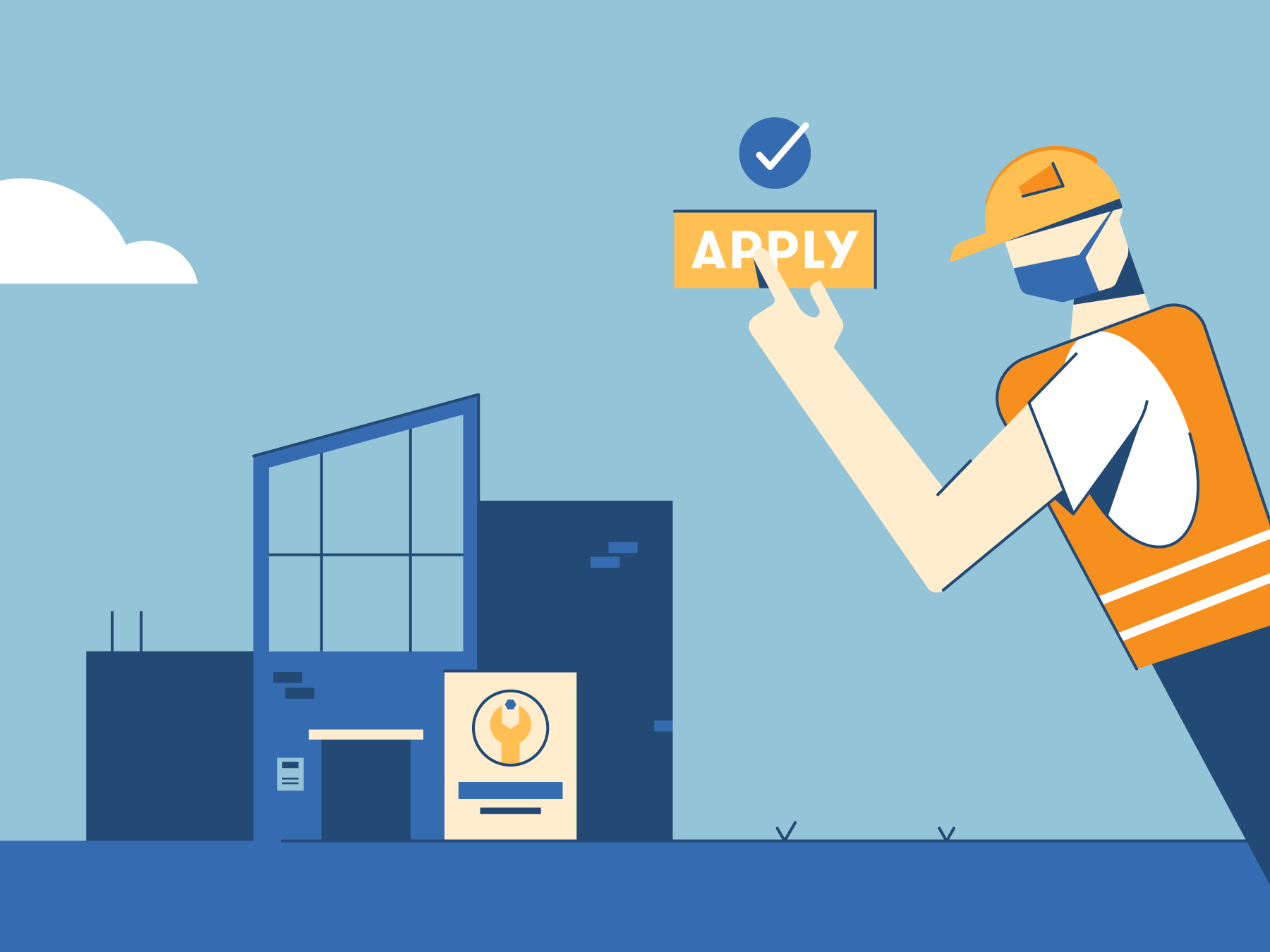 Trade school has long struggled to gain recognition as a worthy alternative to four-year college, but the pandemic is changing perceptions, with one-third of Americans now viewing trade school as a more favorable option than college.

When we surveyed Americans last year in the midst of a booming economy, many young people were skeptical of trade school as a viable option. With our current economic situation, however, a growing number of respondents now understand the benefits of trade school, including lower student debt and good chances of finding a job.

With many industries experiencing economic rebounds — construction alone added 33,000 jobs between July and August 2020 — trade school will play a vital role in building up a strong post-pandemic workforce.

Read on to learn more about all of our findings:

One-Third of People Prefer Trade School to College During Pandemic

In our survey of more than 1,500 people, 33 percent of respondents indicated that trade school is a better option than college during the pandemic, compared to only 9 percent who viewed trade school as a worse option. We were also surprised to learn that 58 percent of those surveyed found the two options about the same, suggesting a change in the perception of trade school, which has long been viewed as less desirable than college. 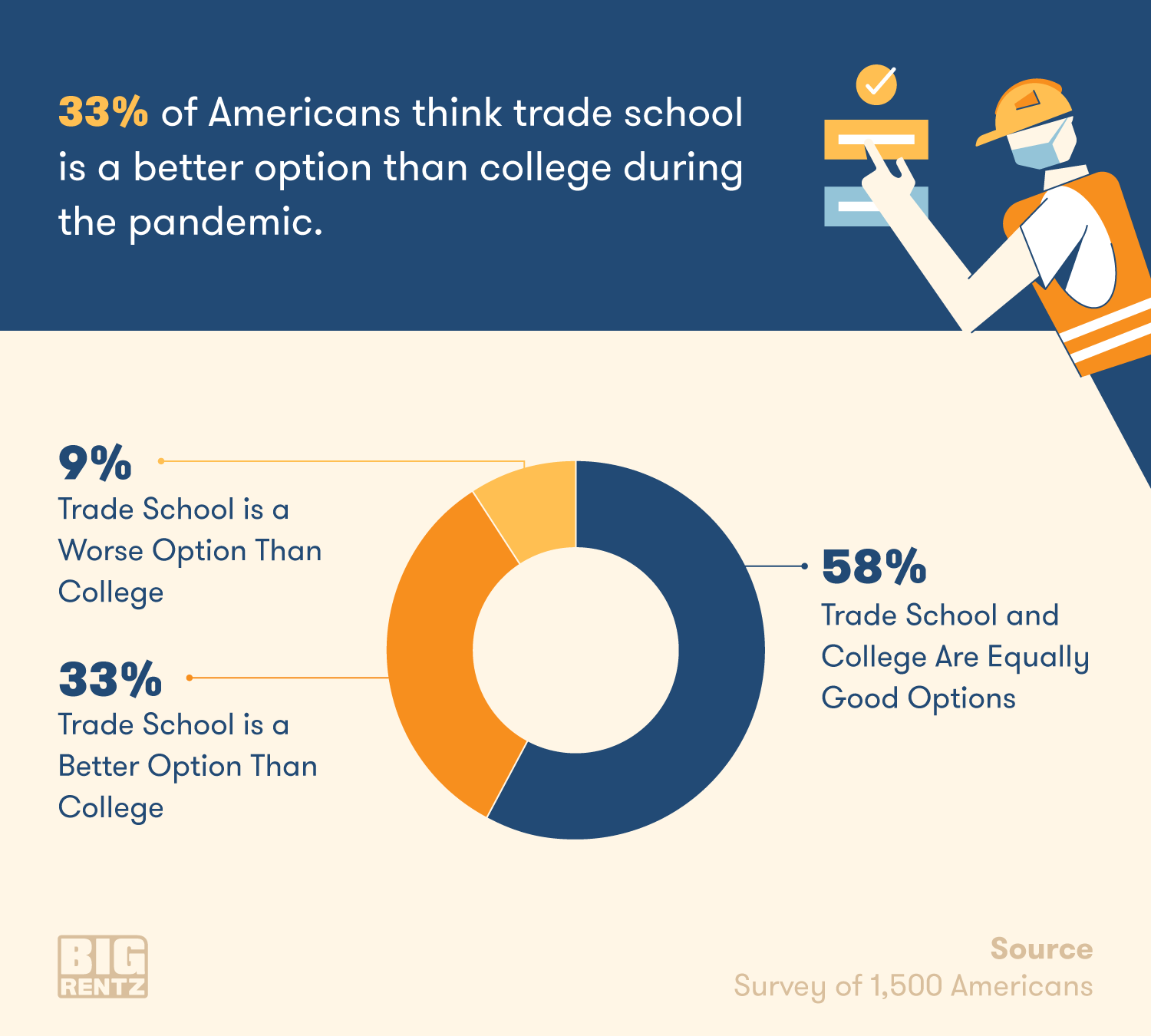 With the pandemic presenting a long-term change in our economy, changes in perception about vocational education could be significant in the coming years.

When asked about trade school and college, respondents consistently highlighted less student loan debt and better chances of finding a job as benefits of opting for a trade school education. While those benefits were also observed in a similar survey we ran last year, the number of people observing those benefits has increased. 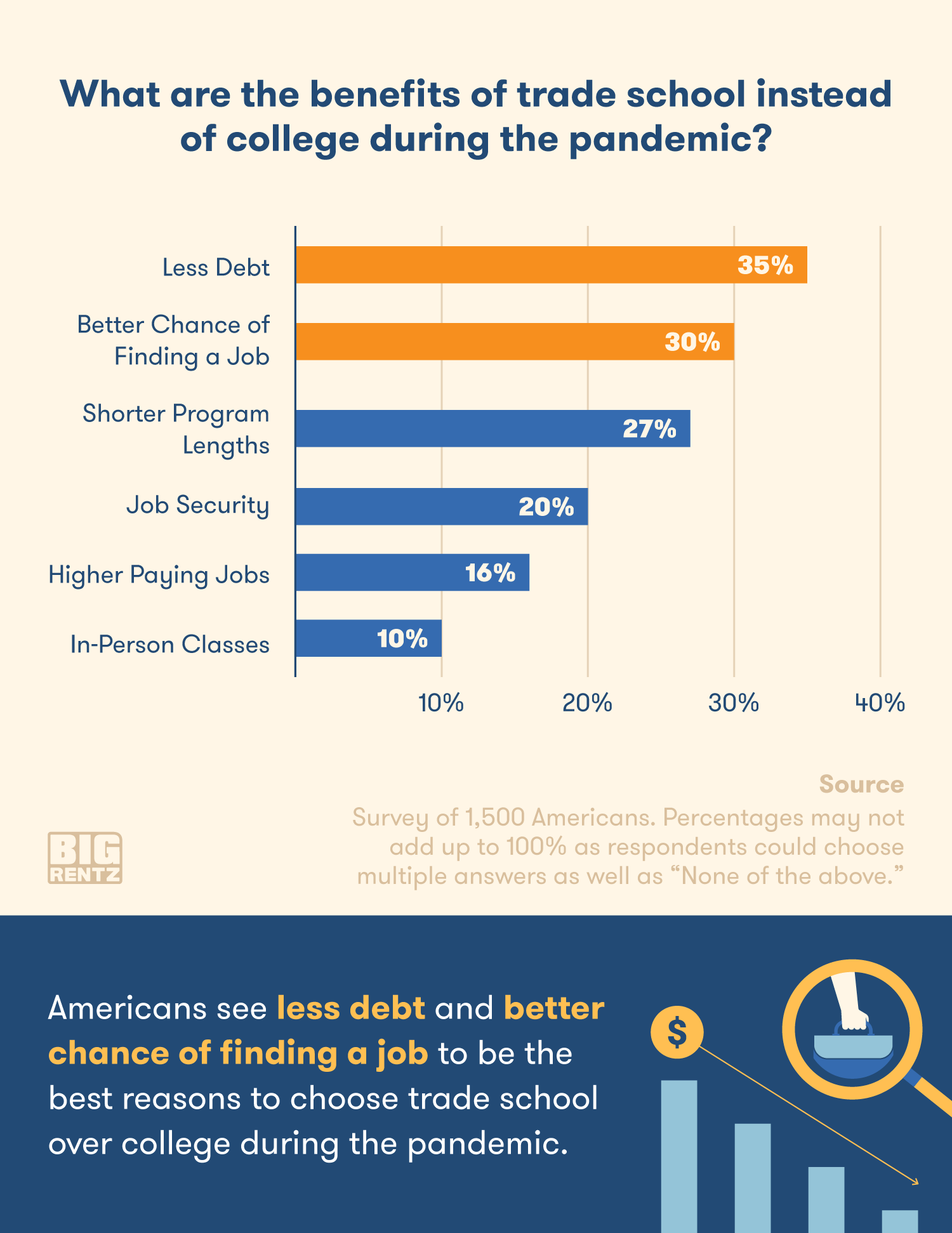 The average college degree costs $127,000< and takes four years to complete in the United States. On the other hand, a trade school certificate costs on average $33,000, and programs last anywhere from six weeks to a year. As a result, the potential to save money and start earning sooner is excellent for those opting for a trade school education.

Though people see many advantages to a trade school degree, only 16 percent of those we surveyed believed that higher paying jobs are a benefit of attending trade school. While it is true that trade school graduates earn less on average than college graduates according to the Bureau of Labor Statistics, there are nonetheless excellent, high-paying jobs available through certificate programs. 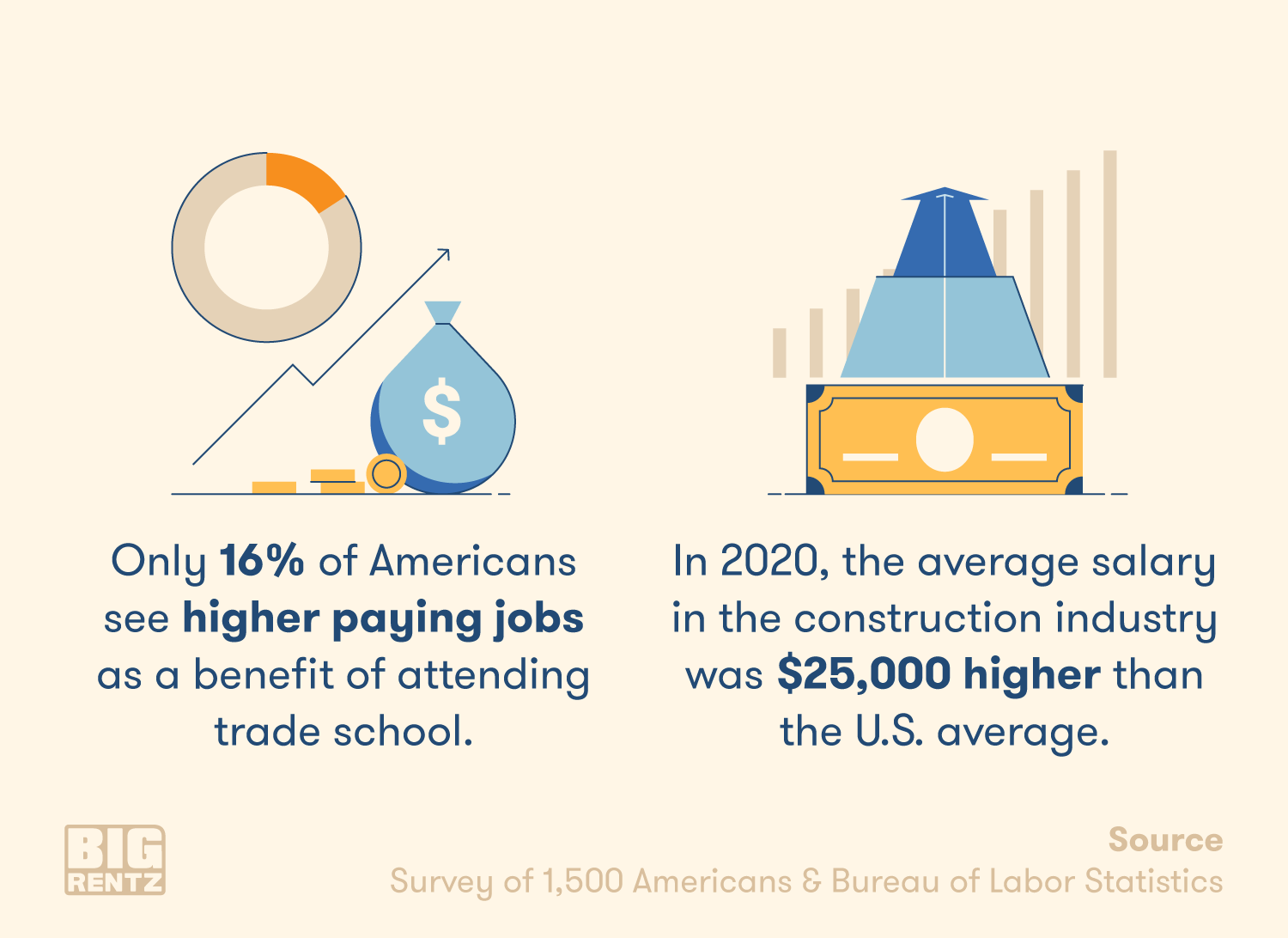 Certainly, college offers a number of great opportunities, but it is important to note that well-paying jobs aren’t limited to college graduates, and trade school offers an excellent path to jobs that earn well above the United States’ average salary.

In considering the benefits of trade school over college, only 20 percent cited job security as an advantage of a trade school education. Certainly this is understandable, as historically, unemployment has been lowest among those with the most education. 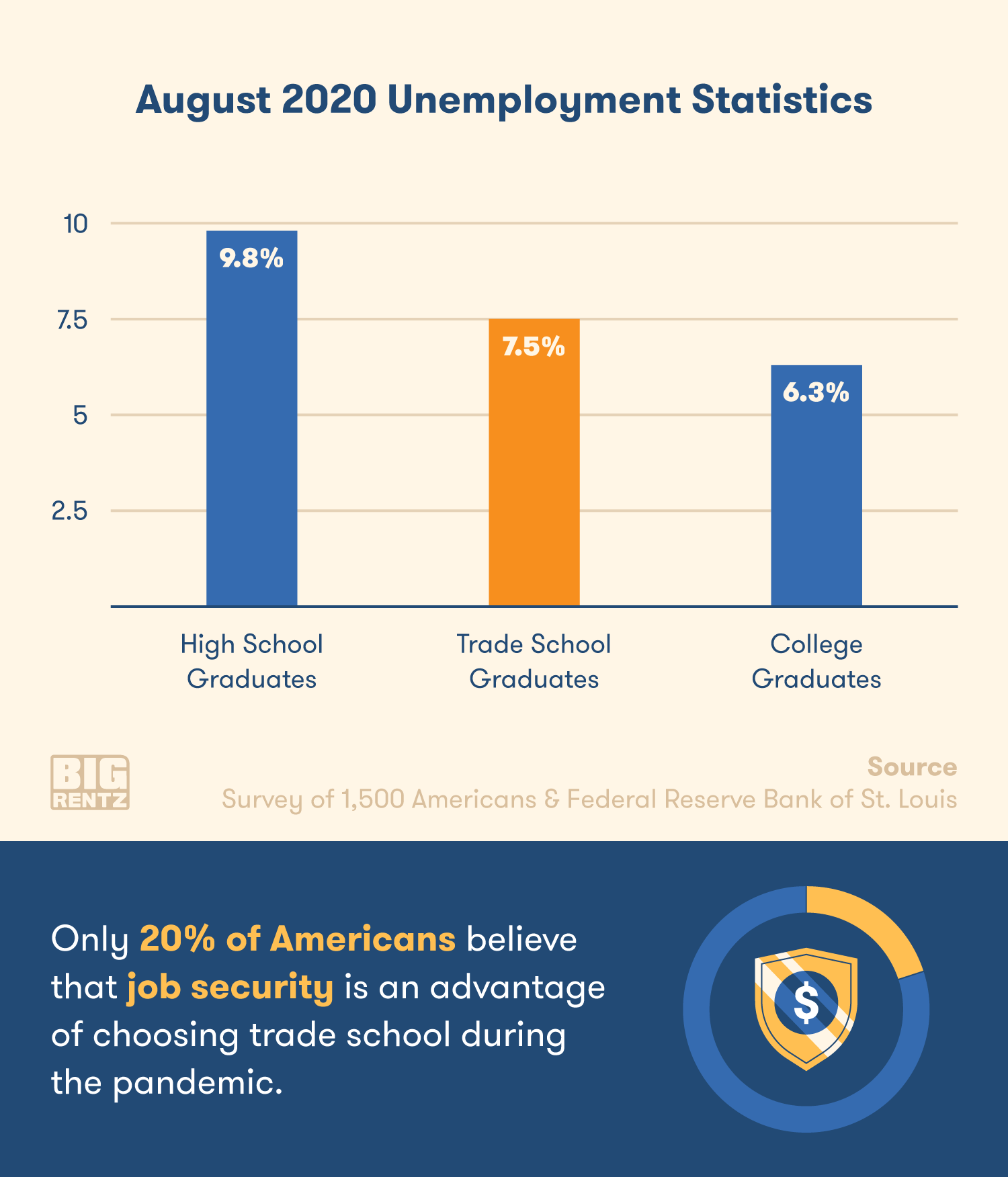 However, in the midst of the coronavirus pandemic, many jobs held by trade school graduates are considered essential, which has helped them to weather the economic storm. As a result, unemployment numbers for trade school graduates have remained roughly in line with college graduates. In August 2020, just 7.5 percent of certificate holders were unemployed during the worst recession in modern history, compared to 6.3 percent of college graduates.

Trade School in the Time of COVID

It remains to be seen how trade schools will handle in-person classes that are required to teach the skills necessary for many essential jobs. Still, trade schools will be valuable for training workers in vital sectors of the economy. For example, the demand for heavy equipment drivers, who require a trade school education, is expected to grow 5 percent in the next eight years.

The construction field, in particular, is in the midst of a huge rebound that will require a growing labor force. Between May 2020 and August 2020, unemployment in the construction field dropped from 12.7 percent to 7.6 percent, and in that same time, more than 200,000 jobs were added.

Perceptions about trade school are changing, with many now recognizing the possibility to choose an alternative path that leads to well-paying, stable jobs with less student loan debt. With a tough economic period ahead, it is excellent that young people have more options for entering the workforce successfully.

This study was conducted for BigRentz using Google Consumer Surveys. The sample consisted of no less than 1,500 completed responses per question. Post-stratification weighting has been applied to ensure an accurate and reliable representation of the total population. This survey was conducted in September 2020.

The Importance of Skilled Trades
15 Surprisingly Hackable Things in Your Daily Life
How to Recruit Skilled Workers: 13 Proven Tactics
Women in STEM Statistics to Inspire Future Leaders
7 Science-Backed Ways to Stay Safe While Working in the Cold
Best Jobs for Returning Service Members
Survey: What Do Young Americans Really Think About Trade School?
Constructing the City of the Future
What Is a Genset?
What Americans Are Building According to Google