While women make up about 47% of the total workforce, they are statistically underrepresented in science, technology, engineering and mathematics, or STEM. Despite this, some of the most notable STEM achievements came from women. For example, the Internet wouldn’t exist without the guidance of women engineers.

When comparing STEM statistics, it’s notable that construction jobs employ more women than many other engineering and technology industries. More women than ever are managing project sites and designing construction equipment. Studies show that diversity among leadership leads to stronger companies, meaning the construction industry can only benefit from hiring more women.

To acknowledge this, we’ve compiled a list of women in STEM statistics that both celebrates the successes and assesses the challenges of being a woman in a technical industry, including:

We hope these statistics teach you something new about the work that women have done to further science and technology. Jump to our infographic below for more stats, plus quotes from famous women in the world of STEM.

The History of Women in STEM

Women are responsible for significant developments in science, technology, engineering and mathematics. We gathered statistics measuring women’s representation in these fields to show the importance of hiring more women in technical occupations, including industries like manufacturing and construction.

Some of the most recognizable STEM-aligned women in history made a name for themselves in the physical sciences, fields typically dominated by white men. American physicist Sally Ride became an astronaut for NASA, and famed Polish chemist Marie Curie changed the world with her studies on radioactivity. 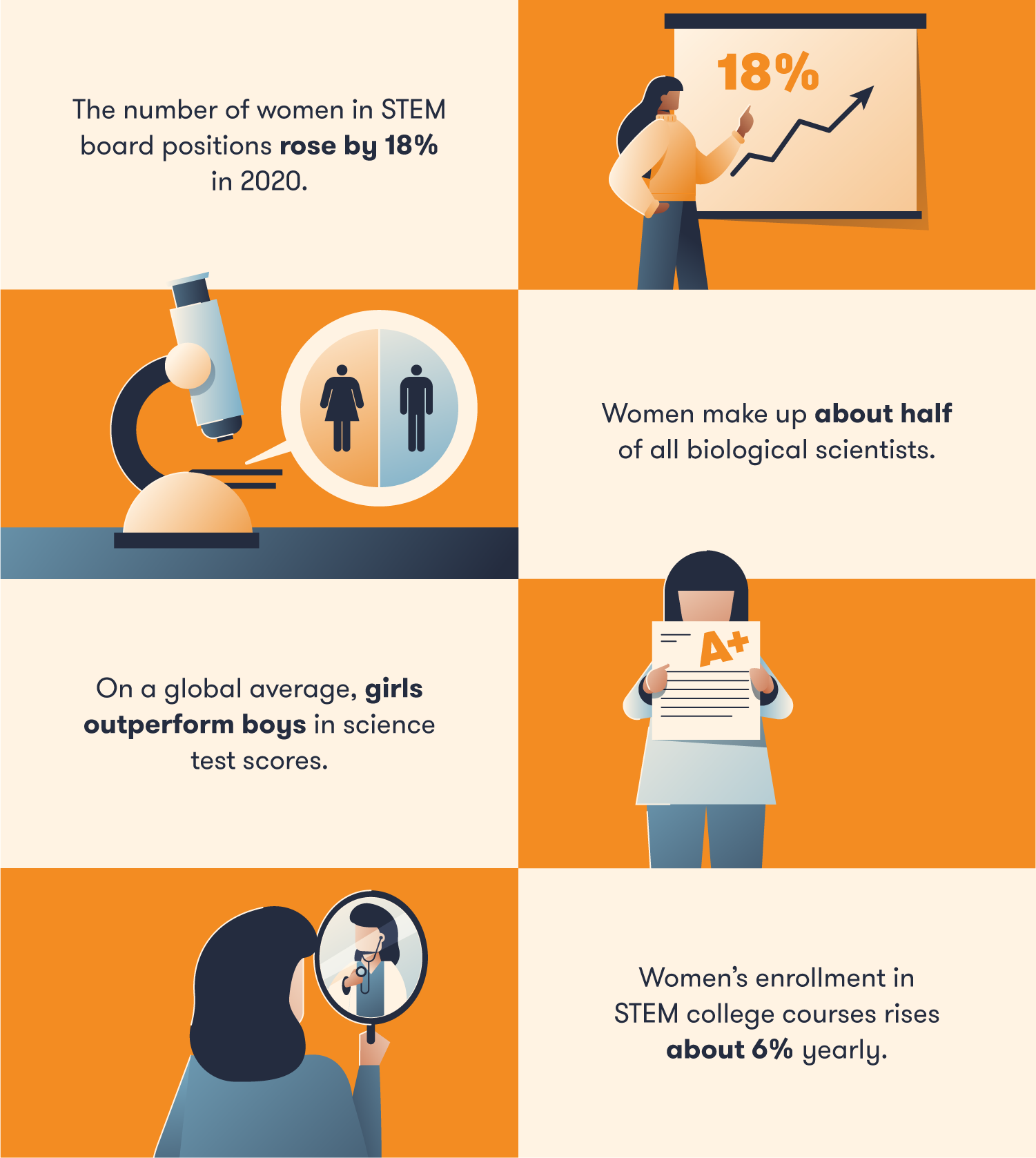 A greater proportion of women study and work in roles related to life sciences than other STEM fields. British anthropologist and primatologist Jane Goodall is possibly one of the most famous scientists of the last fifty years, opening doors for countless young girls interested in pursuing a STEM-related education.

In compiling this list, we looked at statistics on women in many STEM industries including life and physical scientists as well as engineers and mathematicians. We found that even in women-dominated scientific fields, those women had lower pay and rank than men, indicating that gender disparities in STEM is an ongoing concern. In fact, more women than ever before are deciding to pursue careers in technical fields.

How Many Women Are in STEM?

The number of women in STEM occupations increases each year. This includes women enrolled in STEM majors at universities, and women occupied in board roles and stationed in C-suite positions in STEM companies. Each country and region differs in the gender makeup of STEM studies and careers based on the availability of these opportunities to women. Here are some statistics on the number of women in STEM: 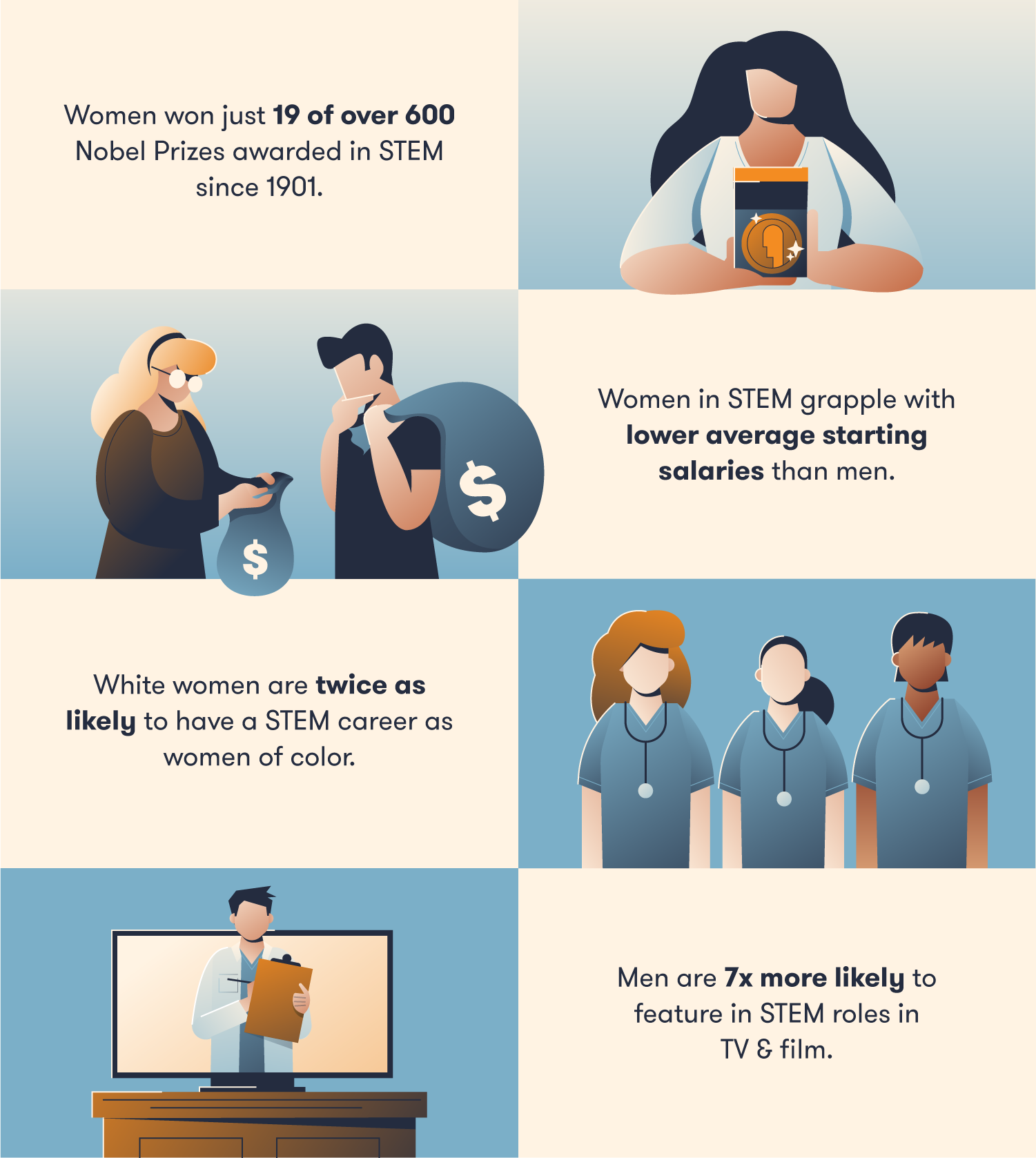 The gender gap in STEM can span even wider than the overall gap, with women traditionally shut out of more technical industries like computing and coding. Studies even attribute mainstream entertainment representation as a prime factor in the continuation of the gender gap. These statistics illustrate this great divide:

Many notable women have an important role in STEM history. The following six women are inspirational leaders that contributed great change to their chosen fields of study. Their positive examples are signs of change that the engineering and technology industries are adapting to hire more women in all career stages.

Johnson was a mathematician working for NASA for 35 years. She developed complex equations that directly enabled manned space missions. She was one of the first Black women to be a NASA scientist by profession, and her story was told in the popular film Hidden Figures.

El Kaliouby is an Egyptian-American computer engineer and current CEO of Affectiva, an artificial intelligence and analytics company. Her work has led to significant developments in voice and facial recognition. Many advancements made by el Kaliouby are significant for the construction technology field.

Frequently referred to as the “Mother of the Internet,” Perlman is a computer programmer famous for inventing what’s known as the “spanning-tree protocol.” This breakthrough developed an actual network on the Internet for the first time, allowing devices to communicate with each other.

Gianotti is an Italian experimental particle physicist and the first-ever woman Director General at CERN, the European Organization for Nuclear Research. She’s an Honorary Fellow for the Institute of Physics and helped prove the existence of the Higgs boson particle in 2012.

Jemison is an American engineer and physician and is the first Black woman to ever travel to space. She maintains a public profile to encourage girls’ participation and inclusion in the sciences. She has written books chronicling the challenges facing women of color in STEM fields.

Doctor Goodall is a notable anthropologist and chimpanzee expert. Her world-renown allowed her to form the Jane Goodall Institute, an organization devoted in part to furthering young girls’ interests in science. The Institute works with young activists to promote a more diverse world.

Opportunities Worth Pursuing for Women in STEM

Whether seeking education sponsorship, occupational mentorship, career advancement or networking, there are plenty of opportunities for women in STEM fields. This is especially true of industries like construction, where challenges like labor shortages can be solved with greater efforts to hire more women. 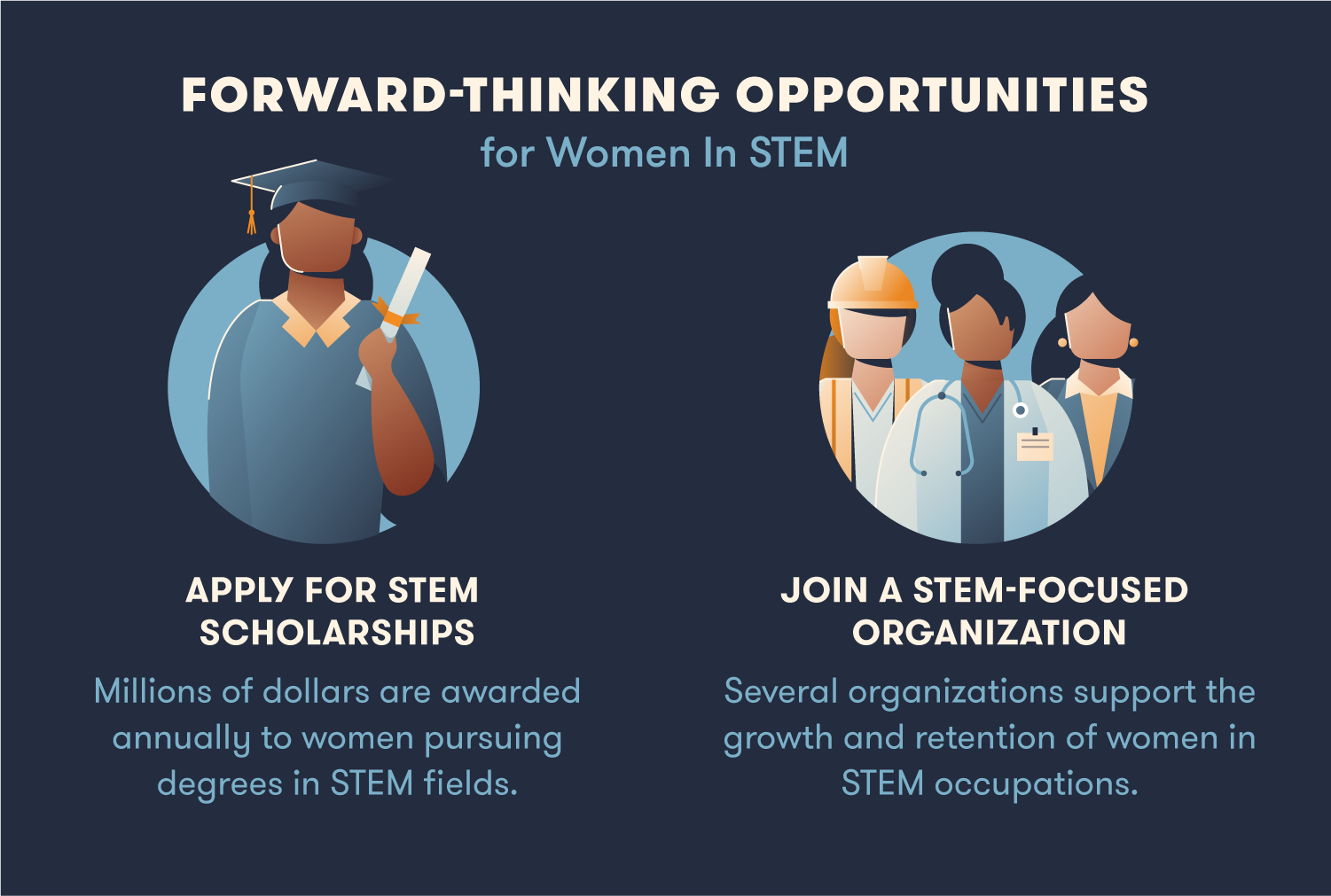 Apply for a STEM-Specific Scholarship

Each year, hundreds of thousands of scholarships are awarded to students pursuing STEM majors in undergraduate, professional and doctoral programs across the country. Among these, there are many scholarships that are available exclusively to women applicants, including the three below.

Several scholarship opportunities are offered from this advocacy organization for women in engineering majors and graduate studies. From set stipends to full-ride scholarships, the SWE provides financial support to hundreds of students each year.

This one-time scholarship awards up to $45,000 to women pursuing doctoral degrees in the sciences. Specifically, this scholarship is meant for any women who’ve interrupted their studies or careers to take care of their families.

The Science Ambassador Scholarship is a full-ride scholarship offered by the team behind the popular game Cards Against Humanity. Women pursuing STEM majors are asked to explain a STEM topic of their choice in a three-minute YouTube video.

This professional association offers scholarships to students pursuing majors that align with careers in the HVAC industry, including the Lynn G. Bellenger Scholarship that’s named after the company’s first woman president and is available exclusively to women.

Get Involved With a STEM-Focused Organization

Providing “content, communities, and conferences” are among the ways that this organization supports women who want to pursue careers in STEM. The group uses women in STEM occupations to make opportunities in the field more visible to younger women.

This organization, open to men and women, focuses on providing accessible mentors to girls starting in high school and continuing into their early careers. These mentors are role models who are meant to deter women from leaving STEM careers later in life.

The Future of STEM is for Everyone

Despite the gender gap between women and men in STEM careers, women continue to make significant contributions in every scientific field. Efforts to introduce kids to STEM careers at younger ages may lead to more interest in young girls to pursue related education. As more women consider the benefits of a STEM education, opportunities abound in fields looking to diversify further.

The labor shortage in the construction industry is driving a shakeup in the hiring field, allowing more women to work in site management roles as well as office leadership positions. Soon, women and men will have more equal representation in STEM occupations, encouraging greater collaboration and innovation.

8 Construction Certifications That Will Enhance Your Career
What Is a Construction Foreman?
Survey: What Do Young Americans Really Think About Trade School?
Dumpster Enclosure Dimensions: How Much Space Do You Need?
9 Types of Backhoe Attachments
Mini Excavator Rental Cost By City
The 10 Best Construction Jobs For Your Career
Types of Foundations in Construction Projects
The Psychological Benefits of Green Buildings
Can Americans Do Simple Household Maintenance Tasks Without Google?