There are two primary concrete block categories: hollow and solid. Both of these concrete block types are typically used during the construction of walls, but can be used for other purposes as well.

Not all solid concrete blocks are fully solid, as you’ll see, but they’re more solid than hollow blocks are. We’ll discuss the different types of concrete blocks — also known as concrete masonry units or CMU — in more detail below. 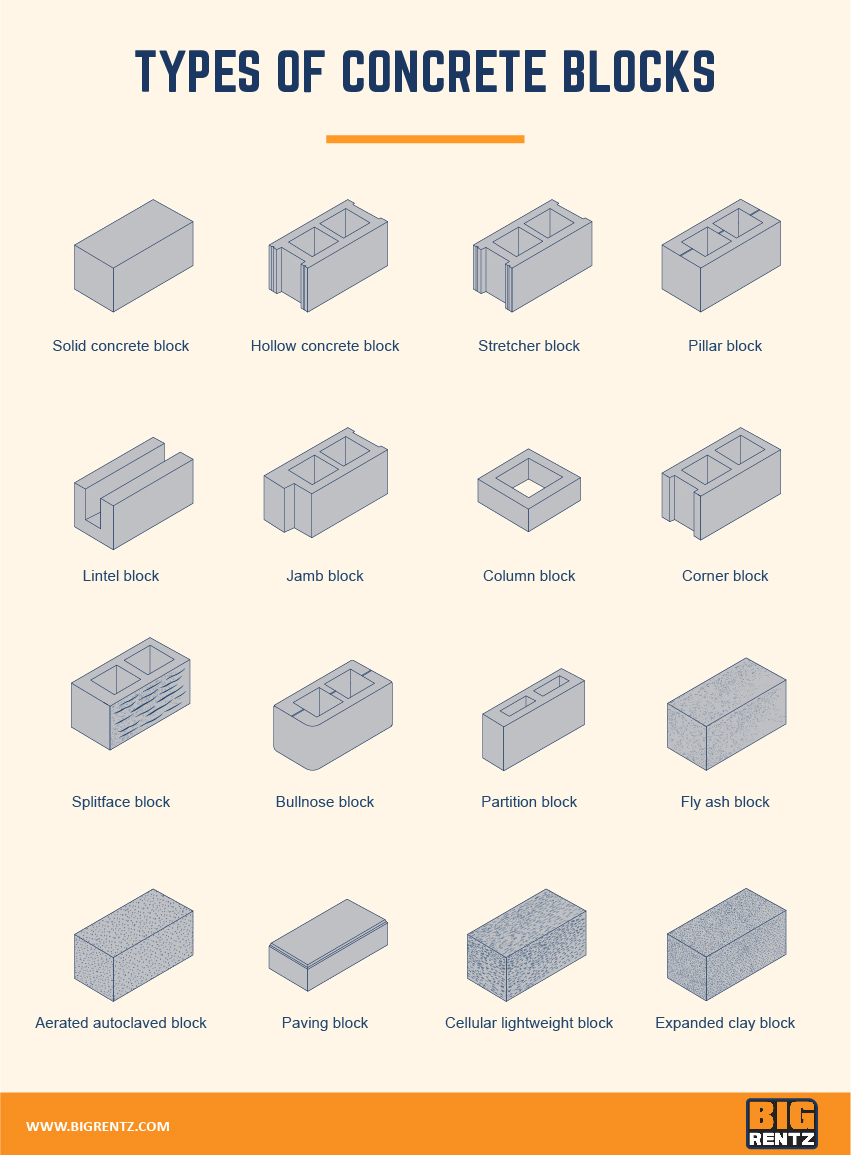 You’re probably familiar with concrete blocks from your local hardware store, where you may have heard some of them called cinder blocks. This is because cinder blocks were originally made in part from cinders that were left over when coal was burned (often at coal-fired plants). The cinders were used as a substitute for sand and gravel in concrete, with the result being lighter and less durable cinder blocks.

The terms “concrete” and “cement” are also often confused. Cement is an ingredient used to make concrete. Other materials, such as sand, gravel, and stone, constitute about three-quarters of what you find in concrete. Cement — a powder formed of clay, limestone, and other substances — is combined with water and added to the mix to create concrete.

The history of concrete actually begins with a sort of naturally occurring cement that formed because of reactions between limestone and oil shale. It was first discovered in what is now Israel and is thought to date back about 12 million years. Cement has been used to build everything from the Great Wall of China to the Roman Colosseum.

There are two main types of concrete blocks used in the construction industry: hollow and solid. Fully solid blocks are often used for projects like paving, where stability and durability are important. You wouldn’t want to try walking on pavement full of holes.

Hollow blocks, which have holes that take up more than one-quarter (and usually more than half) of their cross-sectional area, are used when building boundary fences and other large structures. The holes make them lighter and can be useful when running wiring or piping through them. You can also run rebar through the holes for greater stability. 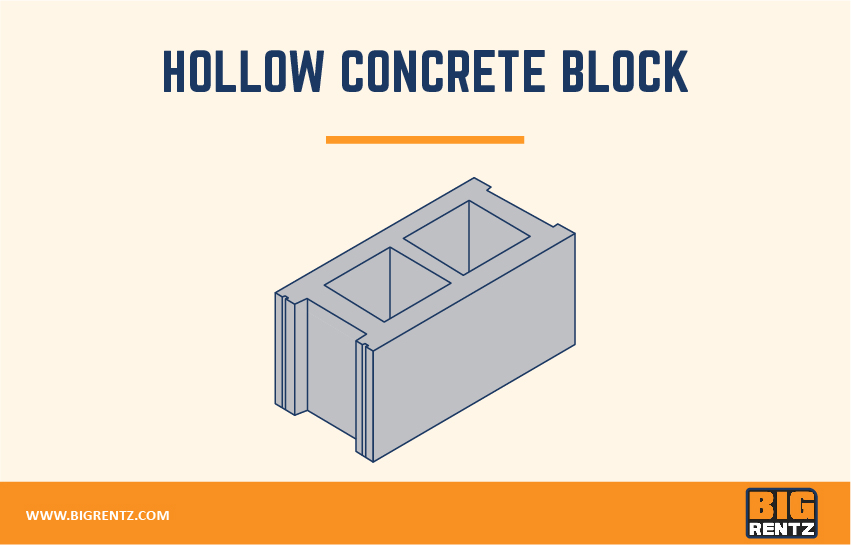 Grades A and B are used for load-bearing concrete block walls, while grade C is used for non-load-bearing walls.

Hollow blocks come in several types, which are detailed below. 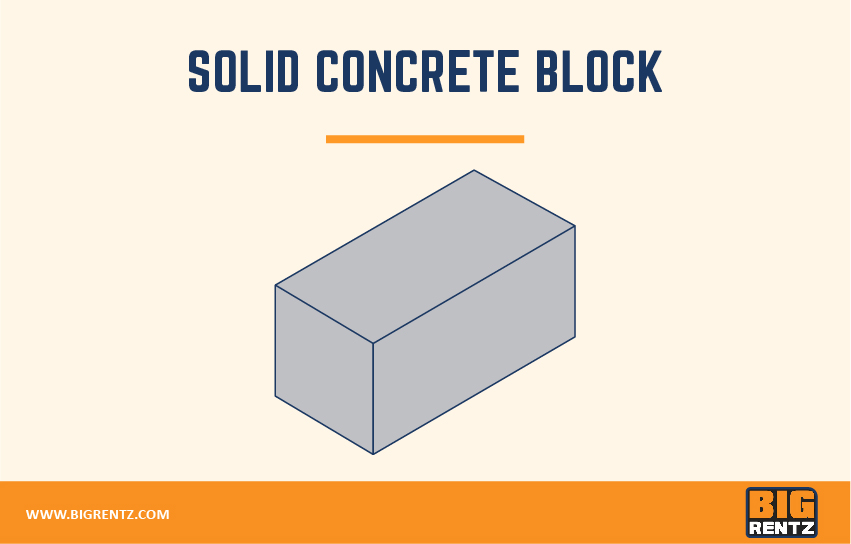 Fully solid concrete blocks look like gray bricks but are typically larger. They’re good for creating walls that provide protection against the elements, such as strong winds.

They can also be used for projects such as garden walls and planters, retaining walls, foundations, steps, and firepits.

Solid concrete blocks are usually heavier than hollow blocks, but they can be less expensive. 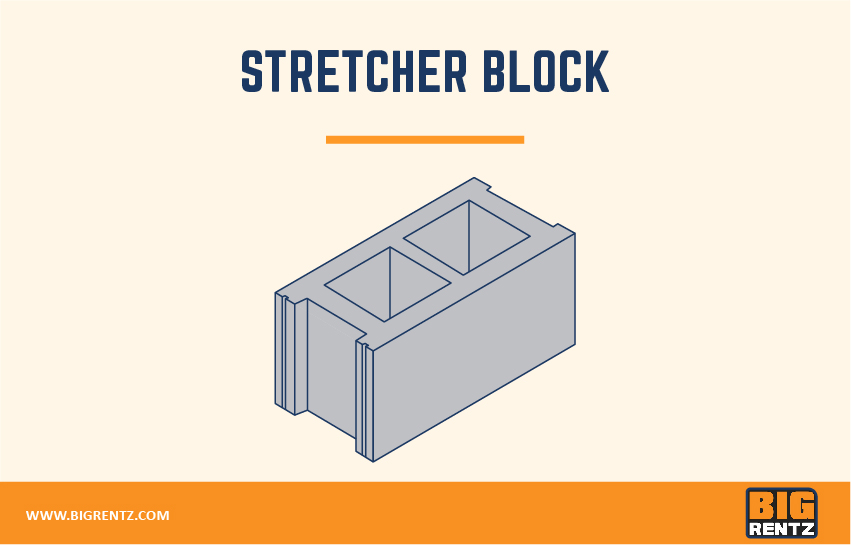 Concrete stretcher blocks are used in construction to connect the corner of masonry units. Their faces are laid parallel to the face of the wall. 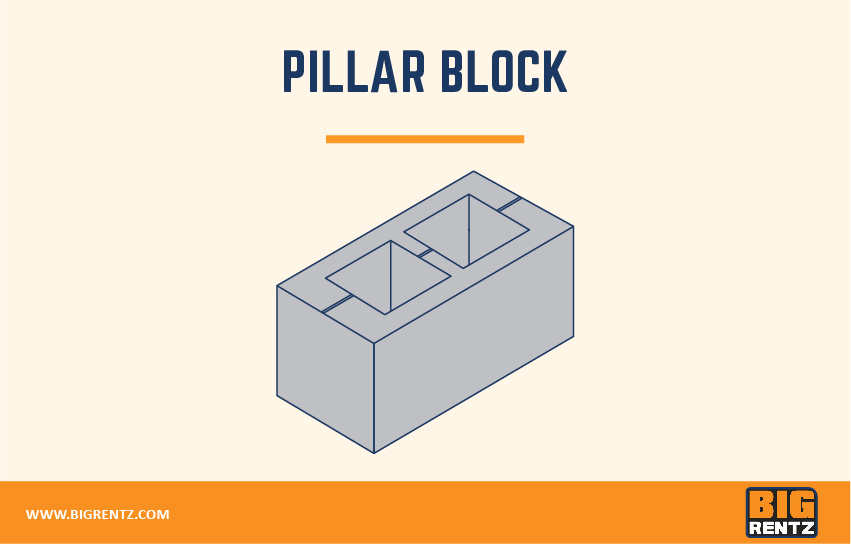 As the name implies, pillar blocks are most often used to build pillars or piers. They’re also called double corner blocks and are designed so that both ends could be left visible. Pillar blocks are the kind of blocks many people think of when they think of concrete blocks, and they are often available in large quantities at building supply stores. 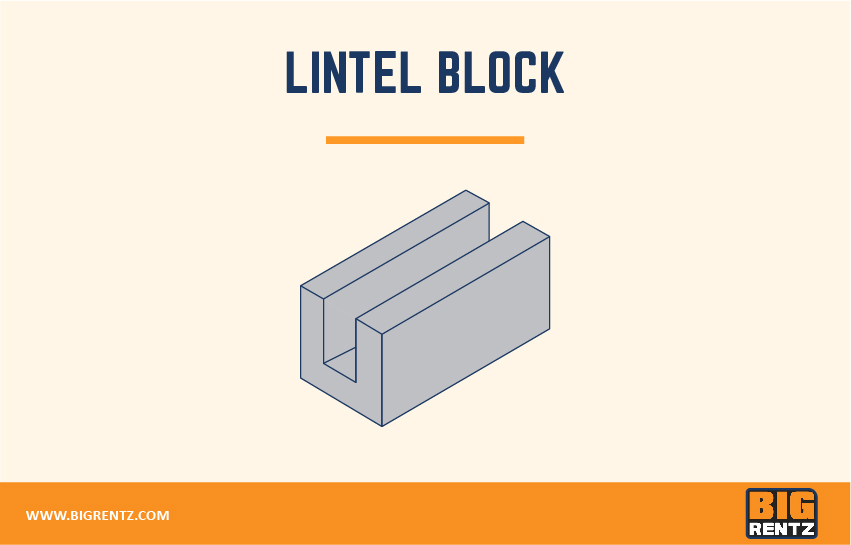 Also called channeled or beam blocks, lintel blocks are recognizable by their U shape. The deep grooves created by the U shape, which run along the length of these blocks, are filled with concrete and reinforcing bars. Used in preparation for lintel beams, they’re typically placed on the top of doors and windows to transfer the load pressing down from above.

A solid-bottom lintel block, such as the one pictured here, can be purchased in a 6-by-8-by-16-inch configuration. 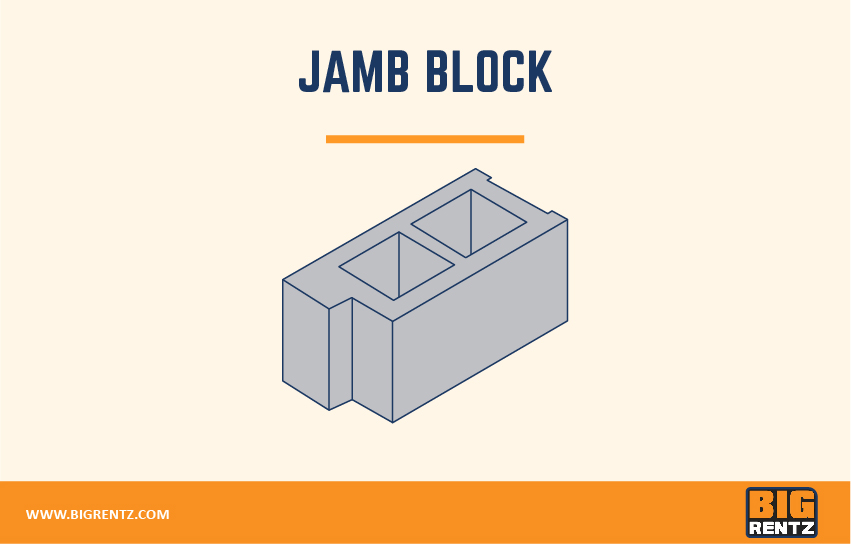 Jamb blocks are made with a shallow groove across the two holes and a deeper groove at one end. They provide space for the casing members of a window and are often used specifically in double-hung windows. 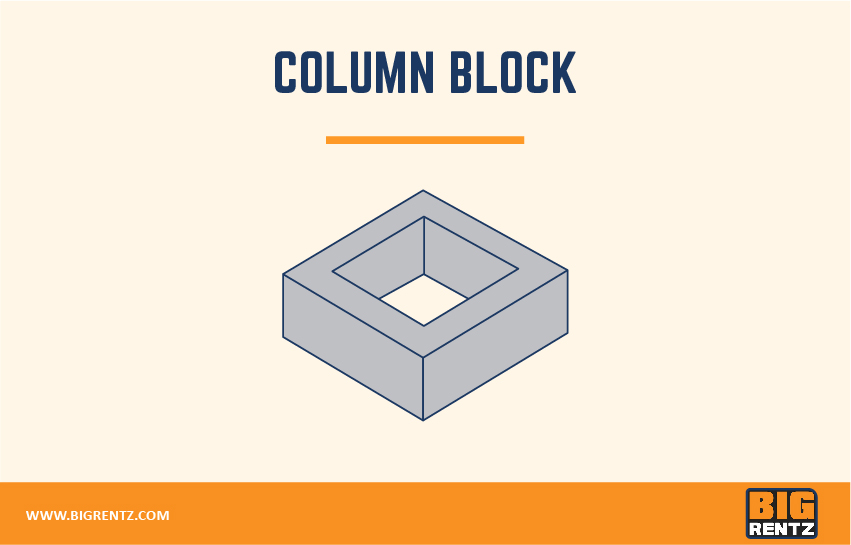 A column block is typically a square block with a single hole. These can be stacked to create columns, with reinforcement inside. 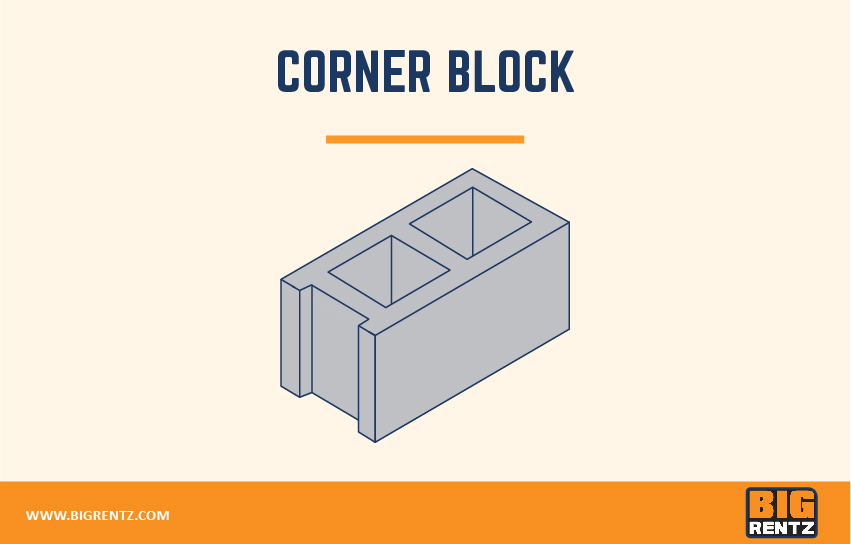 Corner blocks are placed at corners, as you might expect, or at the ends of windows and door openings. The plain side is exposed to the exterior, while the stretcher side runs parallel to the wall. 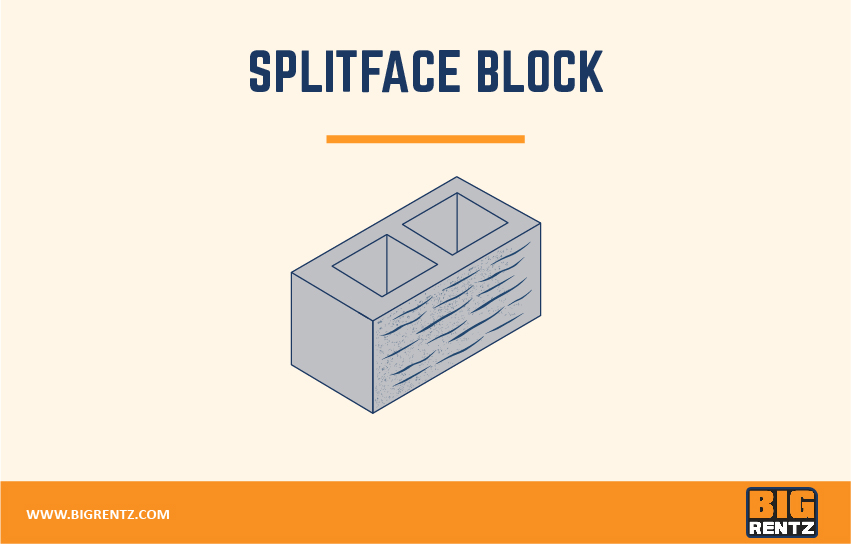 Splitface blocks look like pillar blocks, except one edge has a very rough, almost jagged texture that exposes the block’s inner aggregates. This block is very porous and therefore vulnerable to water damage, but it also has a lower risk of termite infestation and is less susceptible to fire. 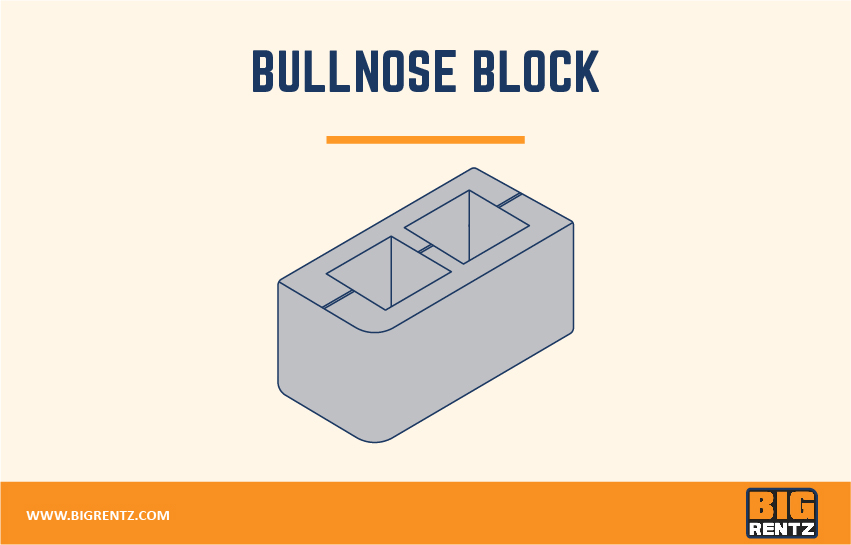 Bullnose blocks are the same as corner blocks in their use and structure, except that they have rounded edges (which is the reason for their name).

A single bullnose block, like the one shown here, might come in a 6-by-8-by-16-inch size; a block with a double bullnose at one end is available in the same size. 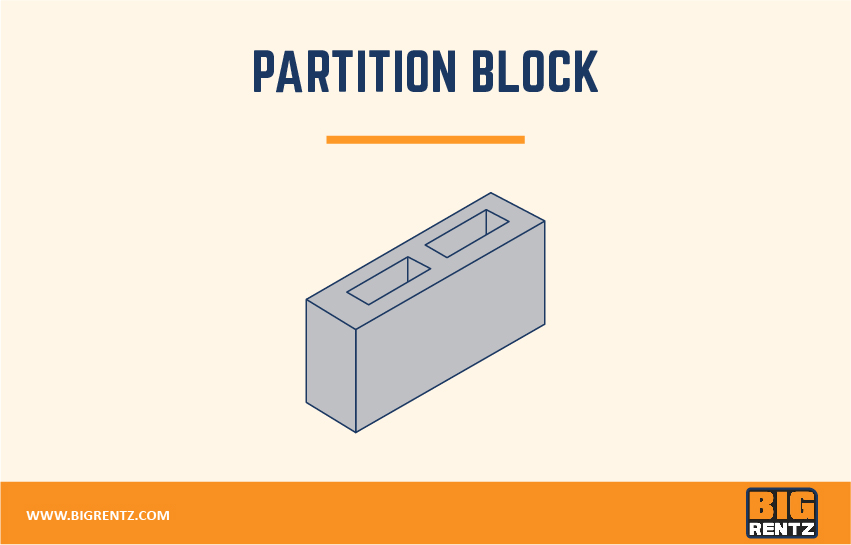 Partition blocks are similar to concrete pillar blocks except that they are taller than they are wide. These narrow blocks look almost like wide goggles if viewed straight-on.

Your choices won’t be as diverse when it comes to solid concrete blocks as they are with hollow blocks, but you’ll still have a selection to consider that can be used for various purposes. 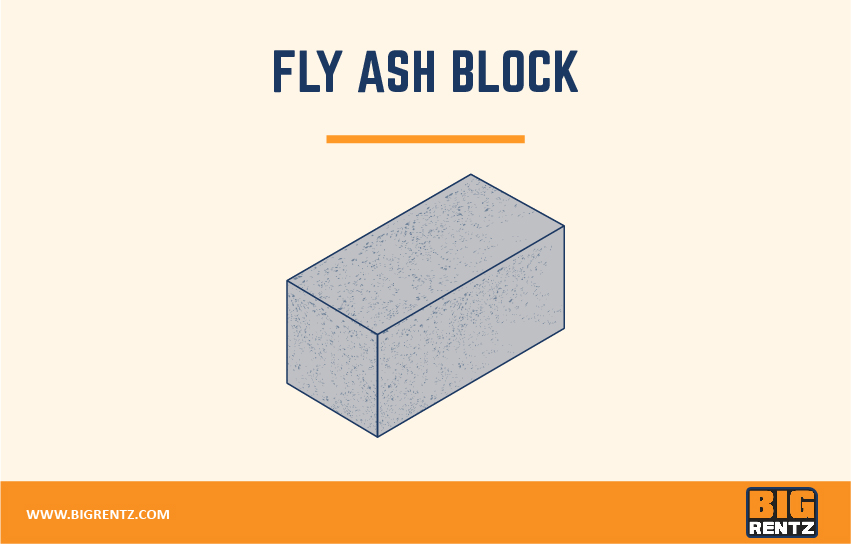 Fly ash is a fine, powdery substance that forms a material similar to Portland cement when mixed with water. (Portland cement is created by mixing limestone and clay or shale that’s been finely ground or burned.) More than half the concrete placed in the United States contains fly ash.[7] Substituting fly ash for cement concrete in road projects, which require a large amount of material, can be a money-saving step.

There are two classes of fly ash:

Using fly ash can reduce CO2 emissions, provide resistance to cold weather, and reduce cracking problems and permeability. It also can be used to create a smooth, sharply detailed surface.[7]

Fly ash, like Portland cement, is a fine powder that can act like a pigment. Particle colors can be amber, brown, gray, green, olive, red, yellow, or yellow-brown. The resulting color can vary depending on the concentration of the particles, but it’s often a shade of gray.

Fly ash bricks tend to only come in small sizes, since they become less durable the bigger they get, and are more prone to fractures and cracking at larger sizes. 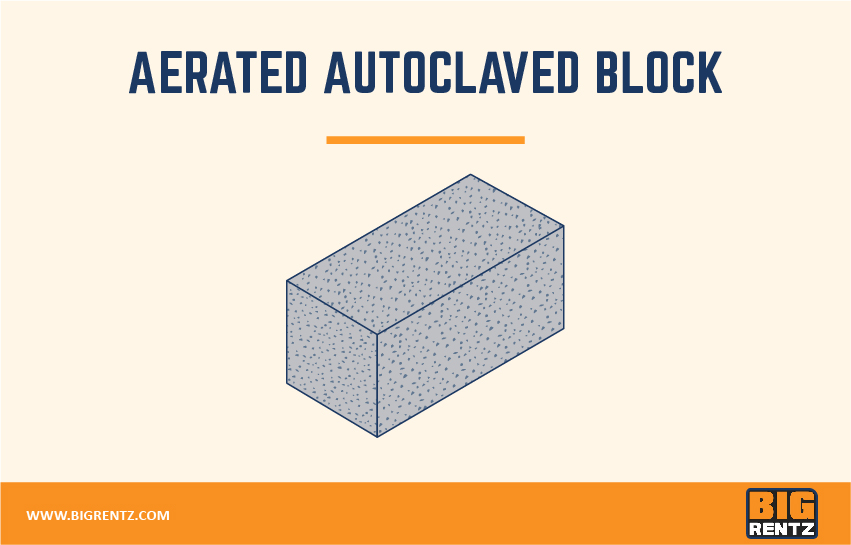 Aerated autoclaved block, known as AAC block for short, is a lightweight material that offers a high degree of sound and temperature insulation. Its fire resistance and insulating properties make it an appealing choice, though it isn’t as widely available as some other forms of concrete.

These lightweight concrete blocks are 80% air, which explains the name “aerated.” The material can be easily shaped and allows for the use of nails and screws. But it’s not as strong as some denser concrete options, so it’s not the best load-bearing concrete and often needs to be reinforced. You’ll also want to seal it with a protective finish to avoid deterioration when exposed to the elements.

These blocks are white to light gray and can be customized for use in sidewalls, partition walls, and other types of wall construction, as well as for steel pillars and infill panels. They’re available in blocks, panels, and specialty shapes such as lintel blocks and U-shaped bond beam blocks, both of which are available in different thicknesses. 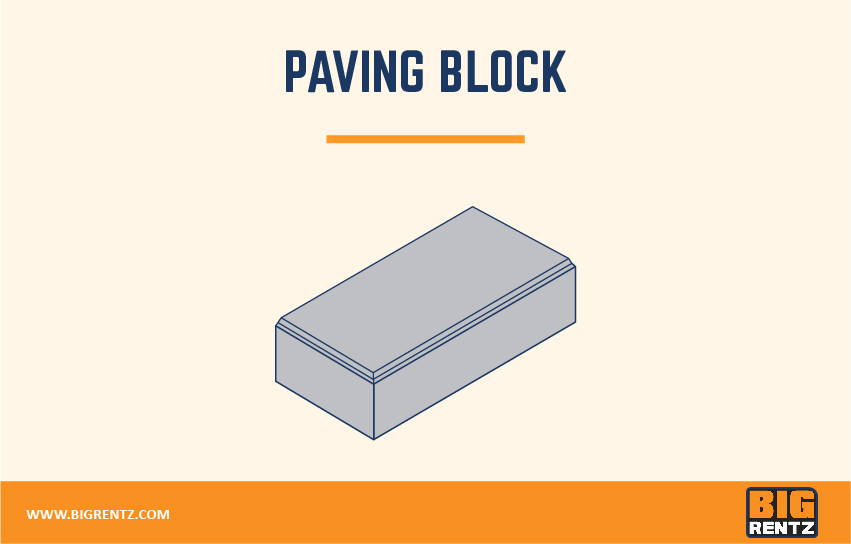 Paving blocks are square or rectangular solid blocks used for paving, on road shoulders (where they should be painted to improve visibility), and in walkways.

Although often brick-shaped, they’re available in a variety of sizes and colors, including sandstone, tan, dark brown, charcoal, and light gray. 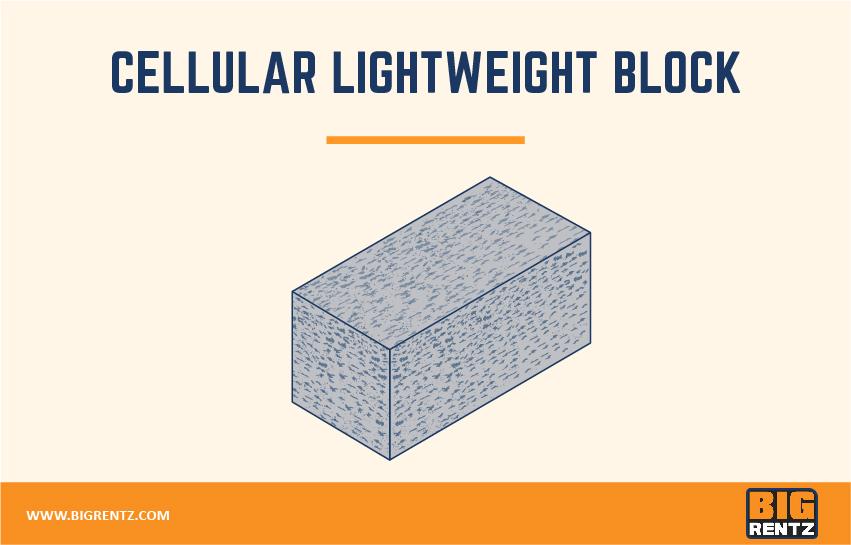 These light gray blocks are made of a material that’s been around since the 1930s. They’re customizable and can be made in various sizes, as well as used for wall panels, compound walls, and parapet walls. 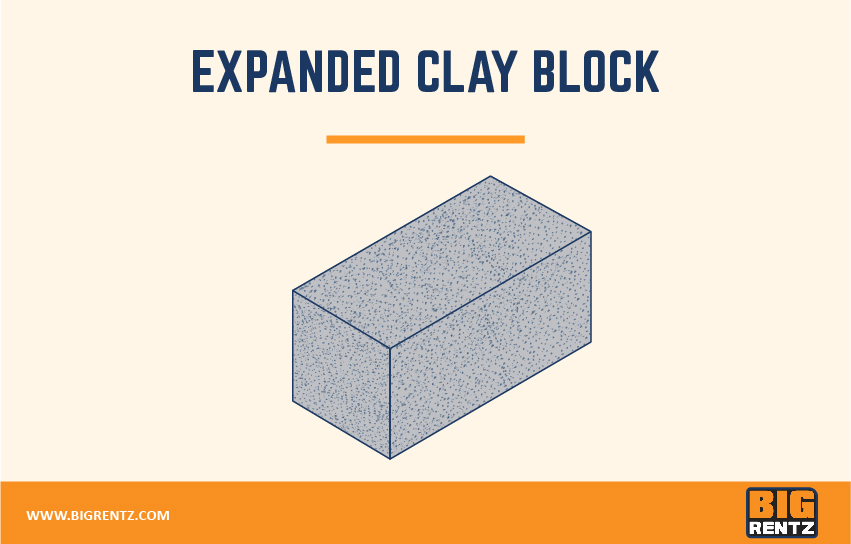 Expanded clay aggregate blocks are made up of lightweight aggregates of fly ash and cement. Waterproof and fire-resistant, their lightweight nature allows them to reduce the overall structural load by up to 50%. They also insulate well against sound and temperature.

Because this material is fired in a kiln, it can be molded into different sizes with different densities.

Concrete blocks can be useful components for different purposes in many construction projects, whether you’re laying down a roadway, building load-bearing masonry walls, or creating partition walls.

In order to choose the right product, you’ll need to take into account how you’ll be using it and the properties you want to emphasize. Different types of concrete blocks are designed to be used at different places in a structure, such as over windows or at corners. Some need more reinforcement than others, and some are better at thermal and sound insulation.

Do you want a dense aggregate or a more lightweight alternative?

Expense is another factor to take into consideration. How much do you have to spend?

Once you’ve answered these questions, you’ll be in better shape to choose the proper equipment and begin your construction project. And you’ll enjoy greater assurance that it will be safe and that you’ll get it right the first time.

What Is Grading in Construction? Types of Land Grading and How To Make a Grading Plan
The History of Concrete
Bulldozer Types, Parts and Their Uses
How Air Compressors Work: An Animated Guide
Pre-Construction Meeting Agenda, Checklist, and Questions
The Costs of Building Iconic Pop Culture Structures
How Are Subways Built
8 Construction Certifications That Will Enhance Your Career
13 Fun Construction Activities for Kids + Printables
Free Construction Estimate Templates and How They Work