Brick is a common building material, and it’s one of the oldest. Brickmaking dates back some 9,000 years, to a time when the first bricks were made in southern Turkey and around the walled city of Jericho on the west bank of the Jordan River.

Initially, mud bricks were made in warm climates where they could be dried and hardened in the sun. Egyptians added straw to clay bricks to add stability and durability by helping the clay bind together. Today, brick can be laid by hand or with the help of heavy equipment.

There are several brick types, which can be made using materials including clay; concrete; sand and lime; and fly ash and water. Fly ash bricks are lighter but strong and provide good insulation. They’re also called self-cementing bricks because of their high calcium oxide — or quicklime — concentration. Calcium oxide is a chemical derivative used in cement production.

Clay bricks, the most familiar, are baked or fired in a kiln.

Brick can be ranked according to quality, with first-class bricks being the best. Fourth-class bricks can break easily and aren’t used in building structures. They can also be classified as facing brick (smoother and designed to be attractive) or common brick, which doesn’t undergo any special surface treatment or color alteration.

Facing, or face brick, is most commonly used to make a good impression in places with high visibility, such as fireplaces and entries.

Bricks come in different sizes, and brick lengths can vary. Various types of brick can be used for construction projects including bridges, buildings, pavement (particularly common in the 19th and near the turn of the 20th century), and aqueducts.

Standard brick sizes vary from country to country, with dimensions written as depth x height x length (D x H x L). Standard brick dimensions may be expressed in either imperial units, in terms of inches, or metric units, as millimeters. Here are the specified dimensions of standard bricks in a few different countries.

While it’s important to keep in mind that sizes do vary, we’ll be focusing on U.S. brick sizes from this point forward. The sizes provided are industry standards for common bricks. 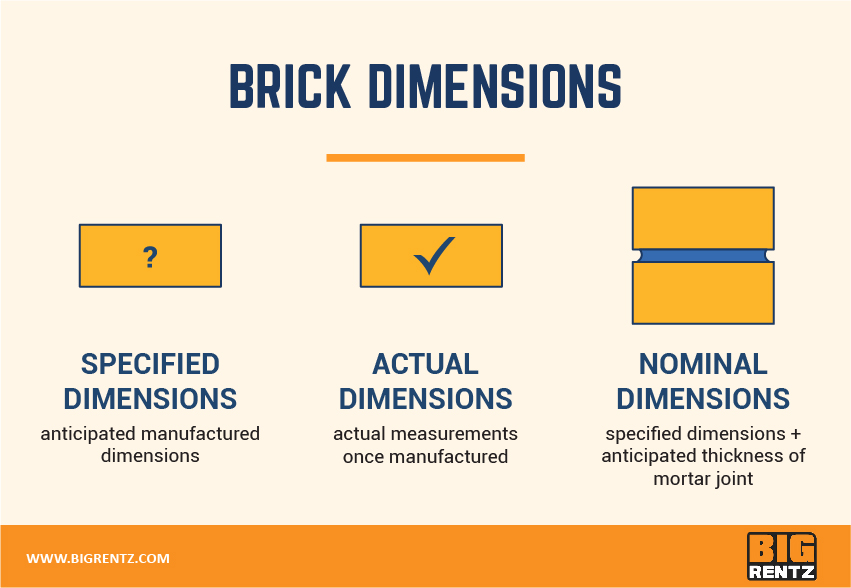 When discussing brick sizing, three kinds of dimensions may be referenced:

Modular bricks are sized so that their nominal dimensions are round numbers or will add up to round numbers when bricks are grouped. Their standard and predictable sizes make it easy for them to be slotted together in construction, or in renovations, where they can be substituted for damaged or missing bricks.

The most common mortar joint size is 3/8 of an inch, or .38 inch, as specified by the International Building Codes TMS 602, on the “Specifications for Masonry Structures.” Mortar joints that measure 1/2 inch are also common. 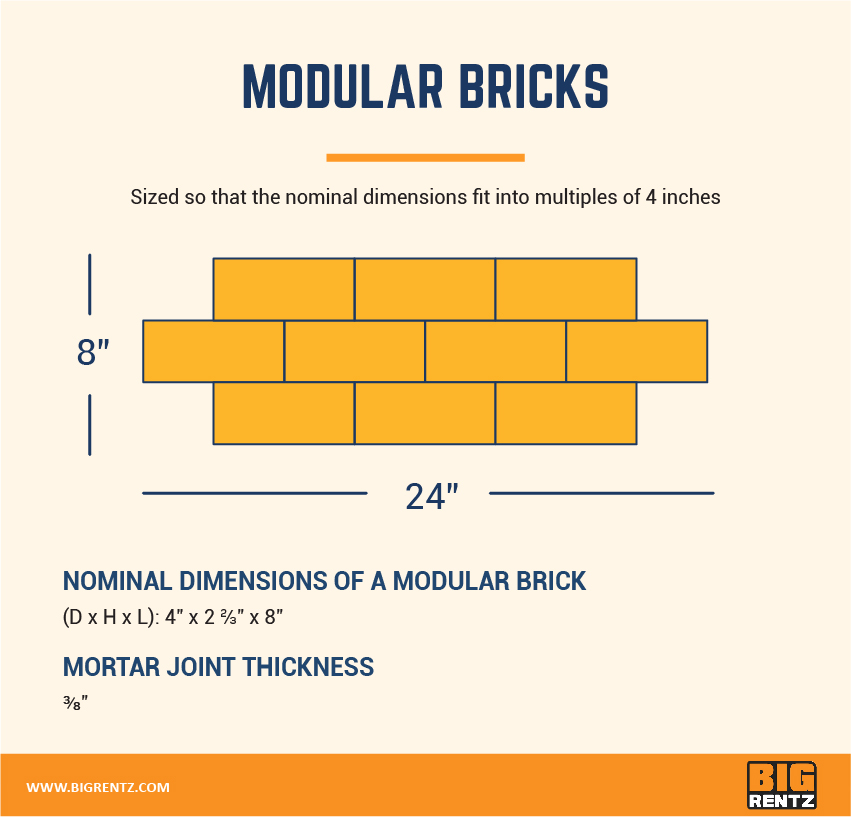 Non-modular brick sizes aren’t standard, so you won’t be able to fit them easily into a conventional pattern or structure, such as around window openings or doors. Instead, they’re meant for unconventional builds that may call for odd sizes. Again, to put it another way, these bricks have specified and actual sizes, but not nominal dimensions.

You might be able to save money by using non-modular bricks, in part because larger bricks are cheaper. In fact, a wall made of non-modular king brick can be 25% less expensive than the cost of a wall constructed from modular brick. Keep in mind, though, that larger bricks are also often used as facing bricks and may not have the same structural capabilities. Special sizes may also increase costs.

On the other hand, heavier bricks can be more difficult to work with from a labor standpoint, because it’s common for bricklayers to hold bricks with one hand, facilitating the building process. 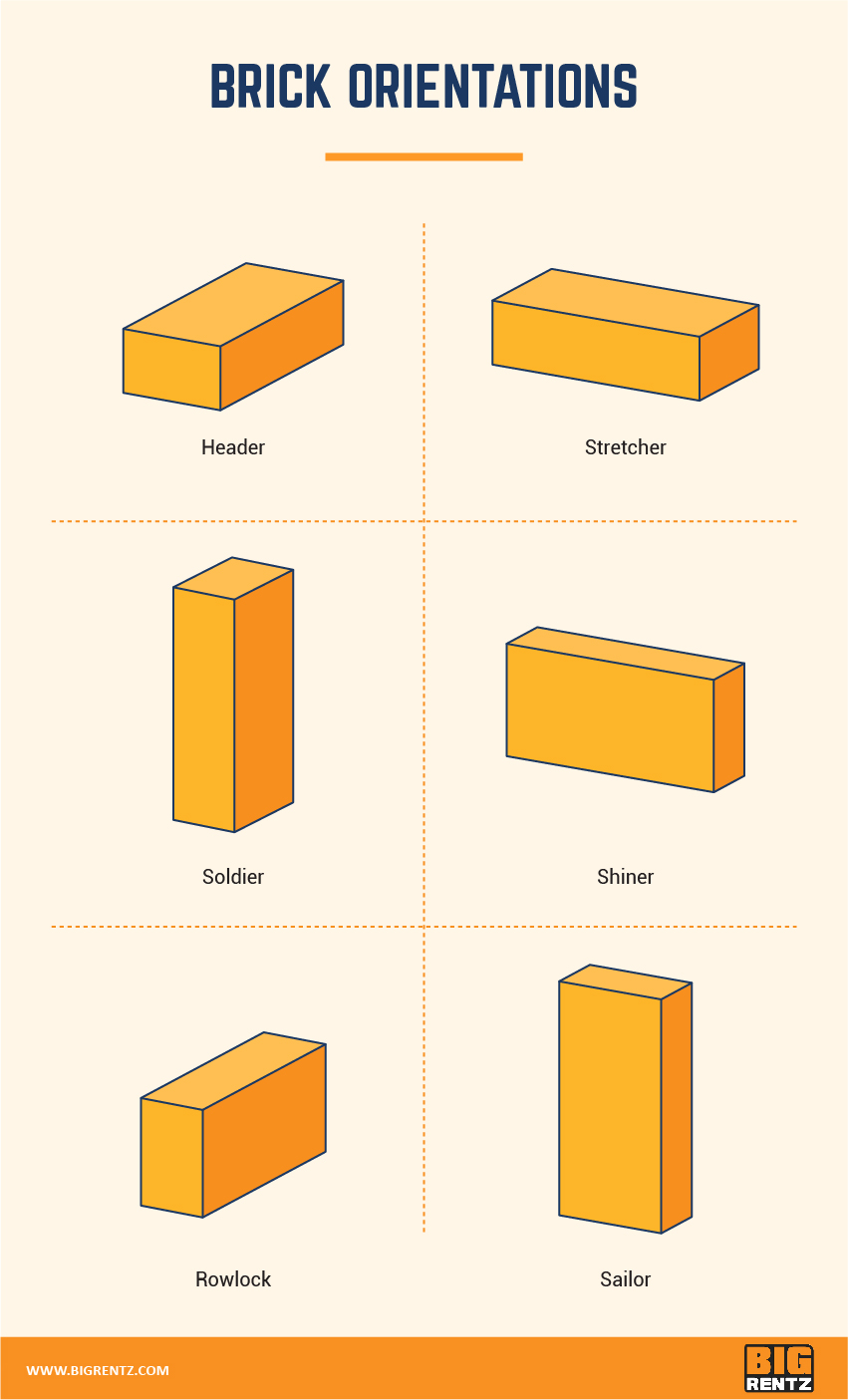 Bricks can be laid multiple ways, in different arrangements, with different surfaces exposed to the exterior. In layman’s terms, we might speak of a brick being vertical, horizontal, sideways, or lying flat, but these fail to convey both the attitude and the position of the brick.

As a result, the following terms have been created to more precisely describe how bricks are laid in brick walls and elsewhere:

A course is a horizontal layer of brick. When a row of bricks is laid in a wall, it’s called a course.

In a stretcher course, all the bricks are flat and parallel to the wall; in a header course, all the bricks are flat and perpendicular to the wall. As a result, it will take more bricks laid side-by-side in a header course to complete the same wall width than if you laid them side-by-side in a stretcher course. It will also create a thicker wall. 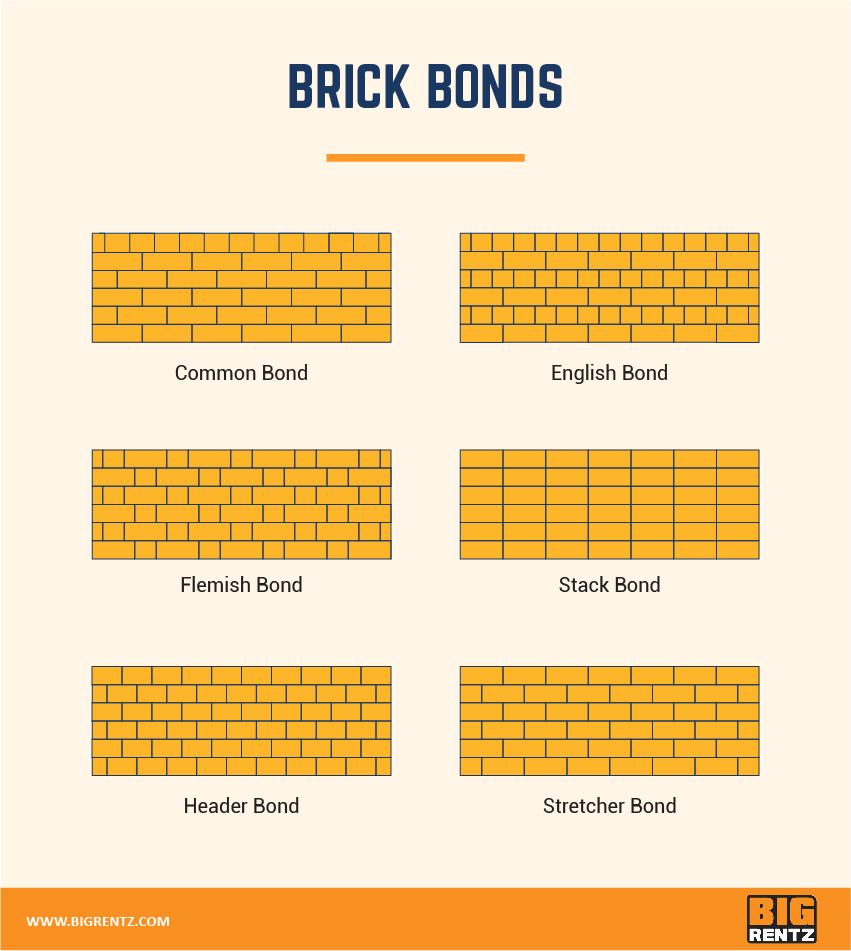 Bond patterns are used for different purposes in brickwork. For example, the bonds listed below are often found on building faces.

These aren’t the only bonds, and other brick bonds may be used in situations that don’t require load-bearing capabilities, such as veneers and road paving. Because the structural aspect of bearing loads isn’t involved, bonds can be a little more creative.

Bonds used in road paving include the Basket Weave Bond (two stretchers next to two soldiers in a repeating pattern that resembles a weave; the Herringbone Bond, a repeating pattern of one stretcher laid next to one soldier; and the Pinwheel Bond, in which the soldier and stretcher again alternate, but in reverse order on each course.

Bricks can be used in a variety of ways for both functional and aesthetic purposes, and projects can involve bricklaying by hand or with the help of equipment such as forklifts and telehandlers.

The kind of brick you choose and the type of bonds you employ will depend on the project you undertake, including whether you’re building a load-bearing wall or are creating something more for aesthetic purposes.

Either way, understanding sizes, dimensions, and the types of material available is essential to successfully completing your project.