How Construction Robots Will Change The Industry 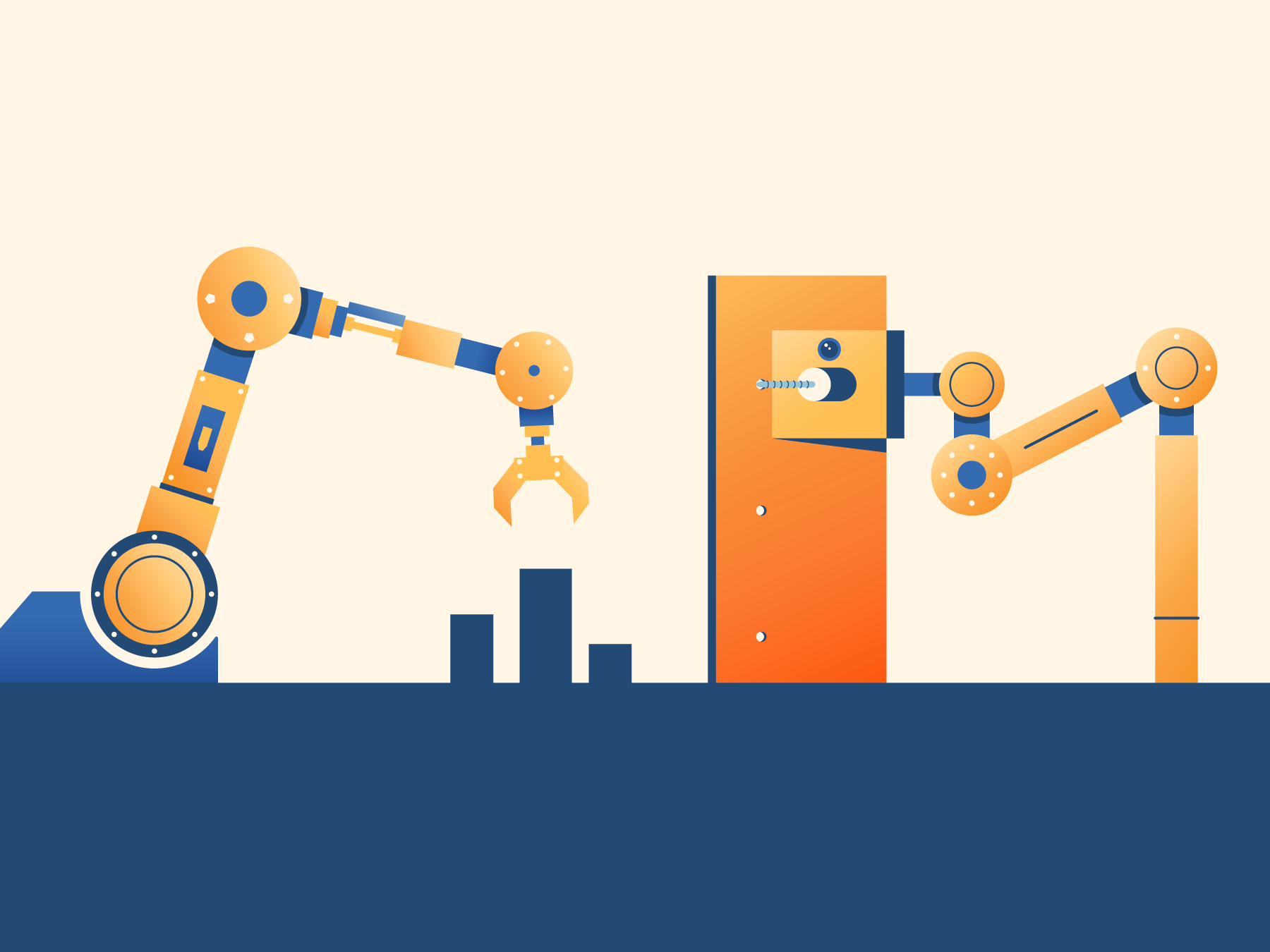 The construction industry is one of the most labor-intensive industries in the world. Yet, due to a continuing labor shortage (and right now, social distancing), the industry has needed to adapt to a lack of people who can do this labor. Adapting has always been one of the industry’s strongest skills, and with technology advancements occurring every day, a new solution has developed: construction robots.

Read on below to learn more about robots in construction, or jump straight to the infographic.

What Are Construction Robots?

Construction robots are automated machines that assist in construction. Although the fear of the robots taking over jobs is understandable, it’s more like they are upgrading jobs rather than stealing them.

The most common idea of a robot (a bipedal automotive being made of metal) isn’t the only type of construction robot. From driverless vehicles to actual humanoid laborers, there is an assortment of machines that assist in construction. 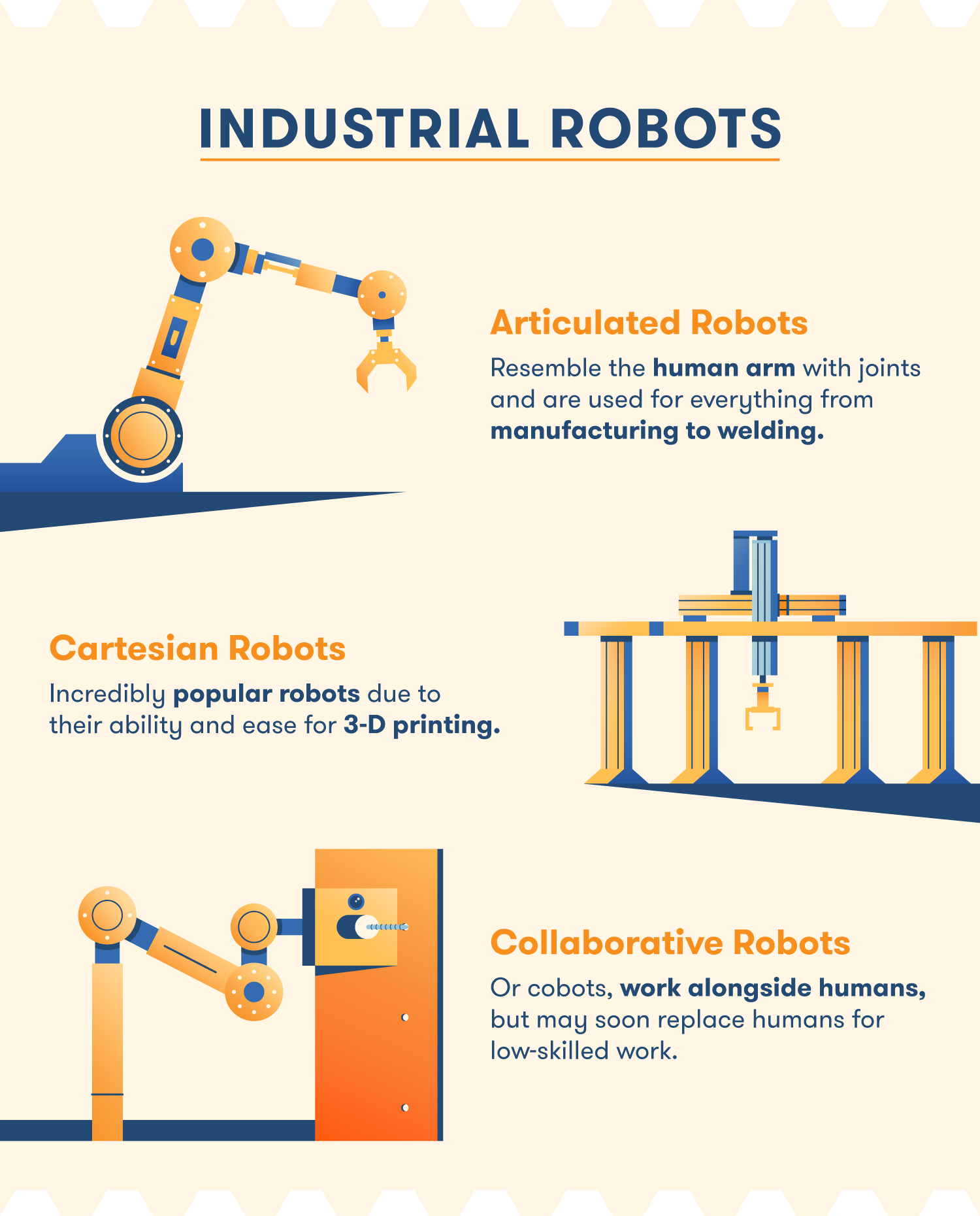 The industrial robots used in manufacturing are some of the more well-known automations. As construction technology continues to advance, the industry has seen an increased use of robotics in order to perform repetitive, high-value tasks.

Articulated robots are robotics used in manufacturing. They closely resemble a human arm and are used for a variety of tasks and applications. The uses of an articulated robot range from simple assembly to welding.

In fact, articulated robots are so versatile, they’re being used for space construction. For example, the Canadarms are robotic crane attachments located on the ISS and LunarGateway, reducing the need for human involvement.

A cartesian robot, also known as a linear robot or a gantry robot, is a robot that uses the three-axis system (X, Y and Z) of cartesian coordinates. These robots are popular for a variety of tasks, like pick and carry and loading, but there is one task that has blown up in popularity: 3-D printing.

3-D printing is one of the most popular applications to enter the construction industry. This is due to the ability to create a variety of products, including a 3-D printed home. The quick, efficient and affordable way of 3-D printing a home may very well make traditional home building a thing of the past.

Humans Working Together With Collaborative Robots

Collaborative robots — also known as cobots — are robots that are designed to work alongside humans, performing tasks that would otherwise be too difficult for the human or robot to do alone. The consistent labor shortage is an unfortunate trend in the construction industry, but cobots may be able to ease that burden and one day replace human laborers for low-skilled work. 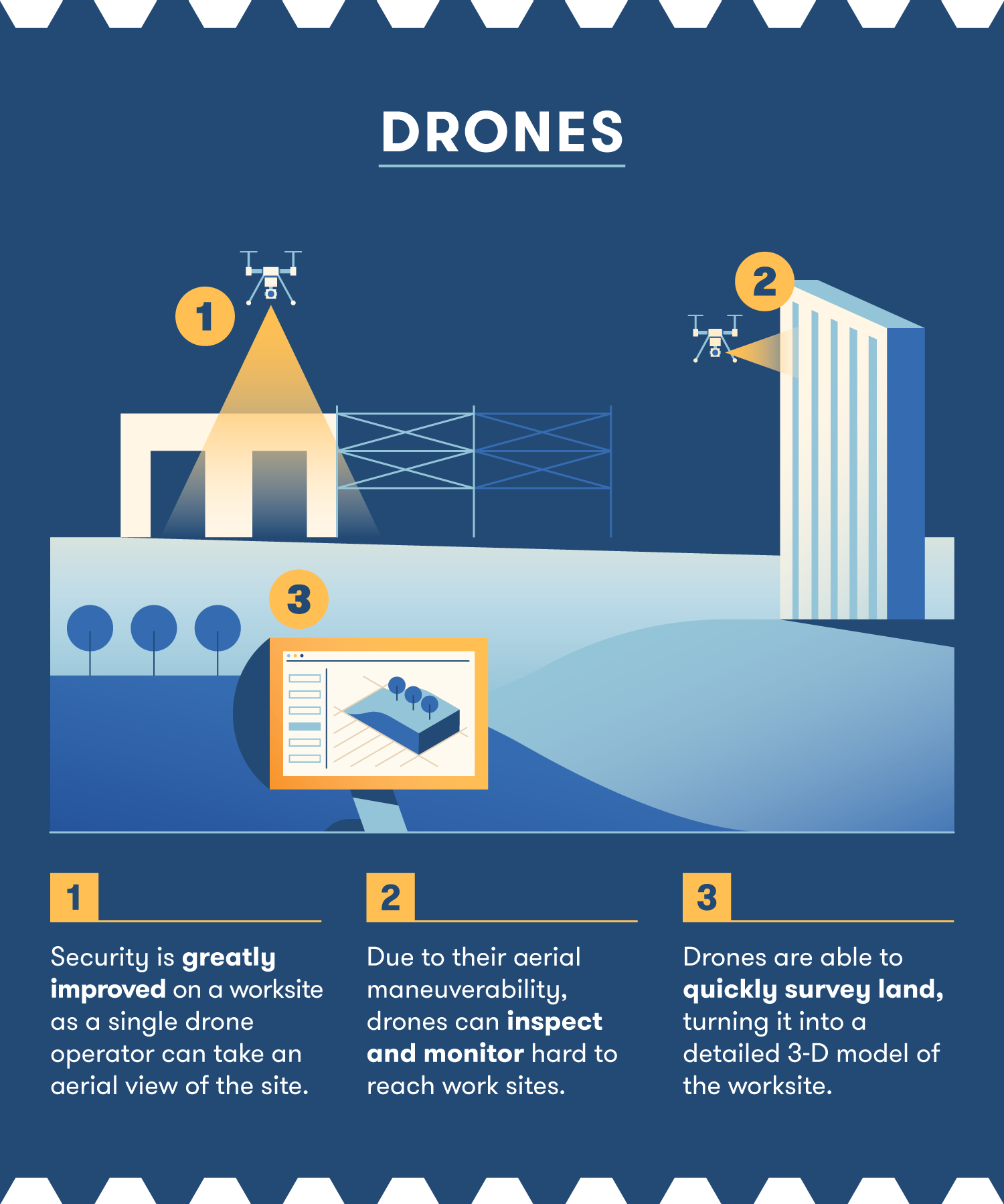 The popularity of drones in the construction industry has been rising and it’s understandable why. Their versatility on construction sites helps with safety and progress throughout a project.

As they are remotely controlled with aerial capabilities, these machines are uniquely able to provide real-life updates of a construction project, revolutionizing the life cycle of a project without the use of human laborers.

One such way is through drone mapping, where a drone produces a detailed aerial map of the worksite that can be turned into a 3-D model. This allows contractors to point out and plan for potential challenges during the planning process. This can provide a more accurate budget estimate, saving money in the long run.

Instead of renting a boom lift or large cranes that require more than one person to operate, drones can provide crucial inspection without the hassle. A drone’s aerial ability allows it to inspect hard to reach structures.

Security is one of the most important aspects on a construction site, with theft costing the industry somewhere between $300 million to $1 billion a year, with less than 25 percent being recovered. Humans are only able to do so much, but with drones, security can be easily improved. A single drone operator can fly the drones up in the air and take an aerial view of everything. 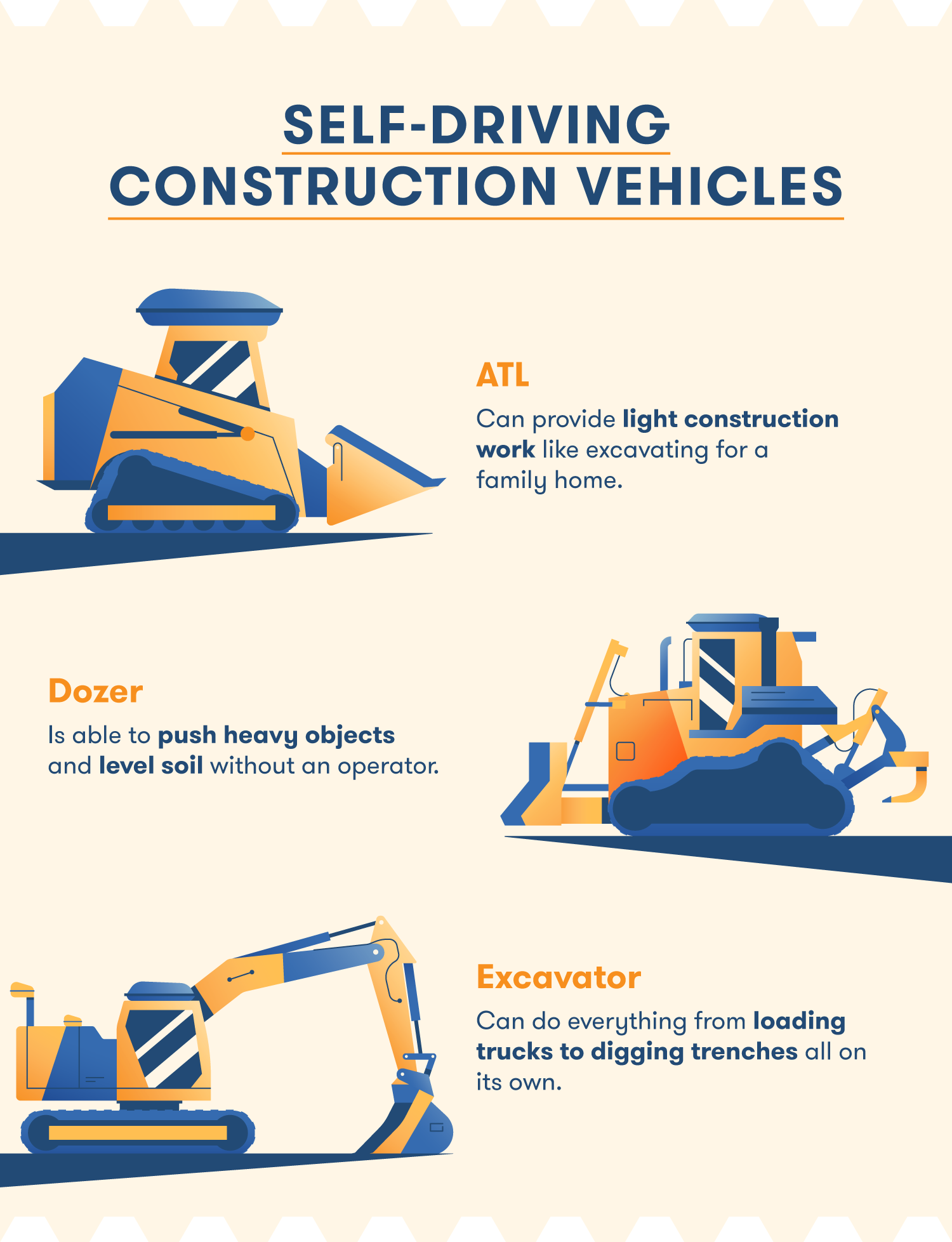 Although the automotive industry is currently working on normalizing self-driving cars, like Tesla’s Autopilot feature, for instance, the construction industry has already been using autonomous construction equipment.

Built Robotics is a company that is currently “upgrading off-the-shelf heavy equipment with AI guidance systems.” Currently, the company’s lineup consists of dozers, excavators and CTL’s, all of which are completely autonomous. The main issue this can solve is safety on road construction.

Working on a street with traffic can be dangerous for construction workers and the best road construction safety plan won’t always prepare people for human error. With autonomous construction vehicles, though, human error can be greatly decreased.

Upgrading Construction Jobs with the ATL

Built Robotics’ Autonomous Track Loader (ATL) is a compact track loader that’s outfitted with a LiDAR, or light detection and ranging sensors and augmented GPS that allows it to work without an operator. This autonomous vehicle is designed for light construction work, like excavating for family homes.

Dozers are versatile machines that can do anything from pushing heavy objects to level a variety of different soil types. The autonomous dozer from built robotics can do all of that without a human worker behind the wheel.

Just like any other excavator, Built Robotics’ autonomous excavator can provide foundation excavation, trenching and truck loading jobs. It does very well with an operator on standby. However, the autonomous aspect of the excavator allows less experienced operators to do much more. The International Union of Operating Engineers (IUOE) is partnering with Built Robotics to train its members on operating these new autonomous vehicles. 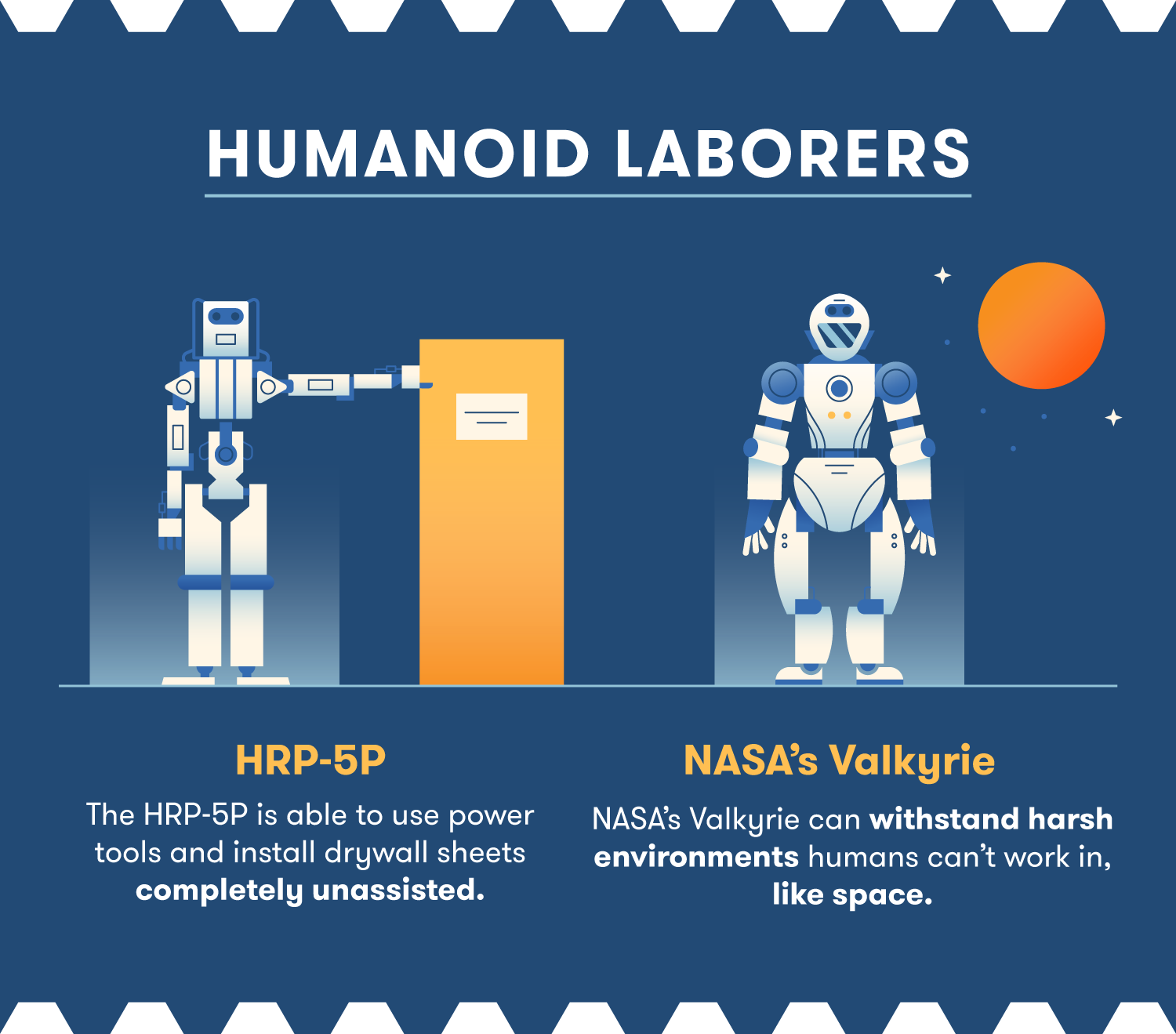 There is currently a labor shortage plaguing the construction industry. Although there are jobs available, the seeming lack of interest in the industry is provoking a response. Thus enter the humanoid laborer, a completely autonomous robot with human-like features.

These laborers aren’t to be confused with other androids, like Chief Operations Officer Data from Star Trek, but these following robots make that reality much closer.

When people think of humanoid robots performing feats similar to humans, the HRP-5P is the closest that would come to mind. Developed by Japan’s Advanced Industrial Science and Technology, the HRP-5P is a humanoid robot that uses a mix of environment detection and object recognition technology to perform a variety of tasks.

Although it’s still in the prototype phase, the HRP-5P can already use power tools and install drywall sheets completely unassisted. Nevertheless, the need for human laborers is still necessary even with the HRP-5P hanging around.

Space construction involves the process of developing and building out in space, and although that aspect is already becoming a reality, there are a lot of difficult steps involved, like building and setting up on Mars, but that’s where NASA’s R5 comes in. Also known as the Valkyrie, this robot is set up to be a “ robust, rugged, entirely electric humanoid robot capable of operating in degraded or damaged human-engineered environments.”

Essentially, the Valkyrie, like it’s namesake, is made to be tough and resilient, guiding humans to a new and promising land. And with the Mars Colony already in the pre-development phase, sending a few of these humanoid laborers to do the job may just be what we need to become a multi-planetary species.

How Are Robots Changing the Industry?

Advancing technology is all about improvement. It’s not about improving and replacing the current workforce, however, but rather improving the job. Construction robots are designed to assist and adapt to the ever-changing world that we live in today.

Safety in construction is one of the most important aspects of any job on any job site, and enhancements in construction technology are used primarily to promote safety. So the question as to whether robots are replacing humans is a little more complex than a simple yes or no.

Yes, robots can replace humans for different work, like building underwater, but since the construction industry is one of the most dangerous industries, they’re doing so to help with work and improve safety.

Suffice it to say, workers aren’t going to be replaced by robots anytime soon. The human touch is still needed for a lot of these different robotics, such as drones or cobots. Even if they were able to make an autonomous trencher, a human will still need to be on site. True, the robots are coming, but they are our friends.