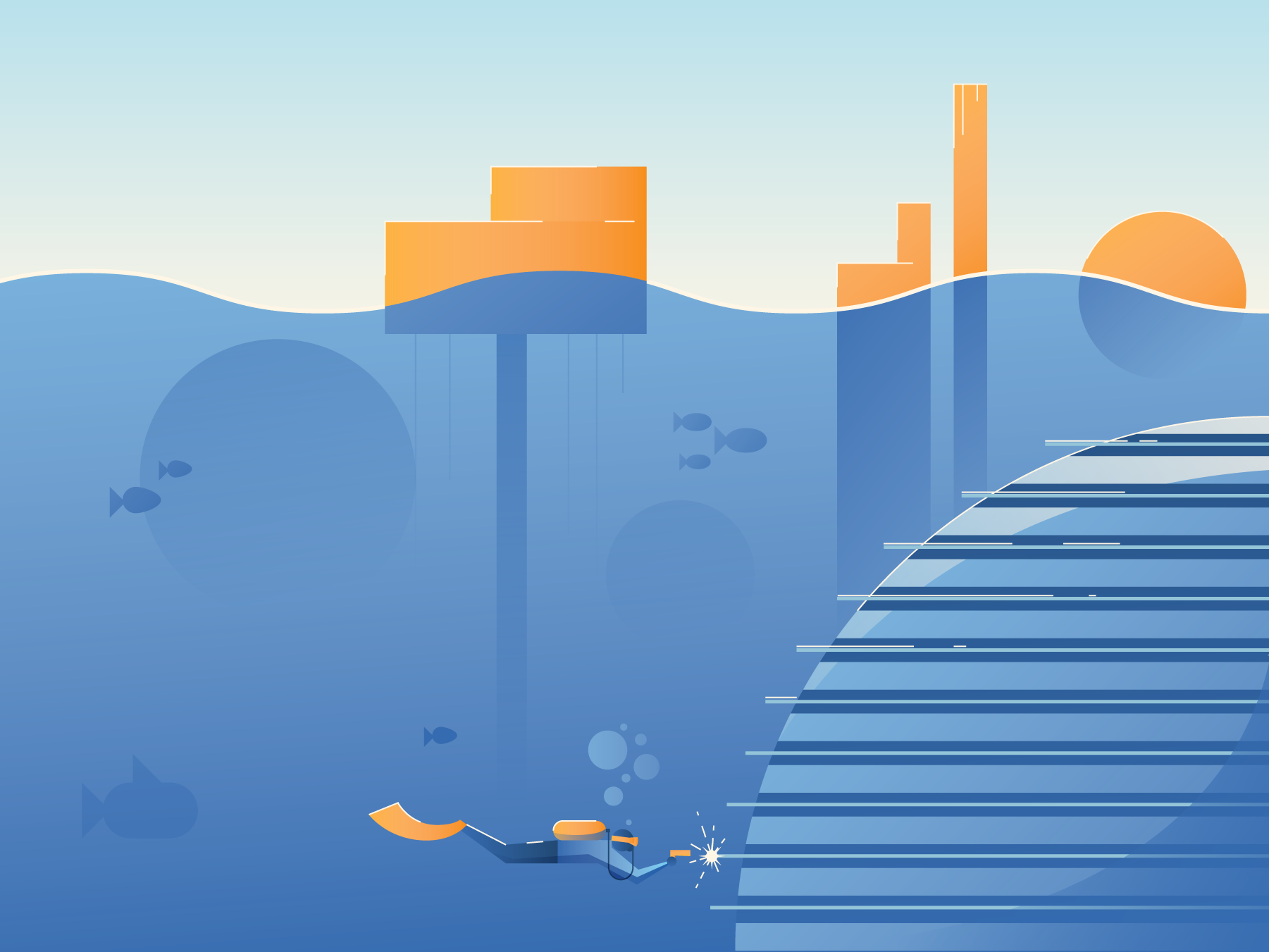 With the earth’s population continuing to soar, buildings have been growing higher and higher. Dense cities are dotted with cranes constructing new, magnificent skyscrapers. What if the future of cities is not further up toward the sky, but deep down in the ocean?

Humans have explored underwater construction for many years, and construction techniques already exist for creating underwater structures and underwater buildings. Although the only cities currently underwater are those that were submerged over time, plans for underwater cities of the future are already being considered.

These plans are not as far-fetched as they sound, and some underwater restaurants and resorts already exist around the world. To really appreciate these impressive feats, it is helpful to learn more about the construction techniques that make underwater building possible.

Read on to learn about:

You can also jump straight to our infographic to learn about underwater construction.

Building on land can be difficult, but building underwater presents even more unique challenges. 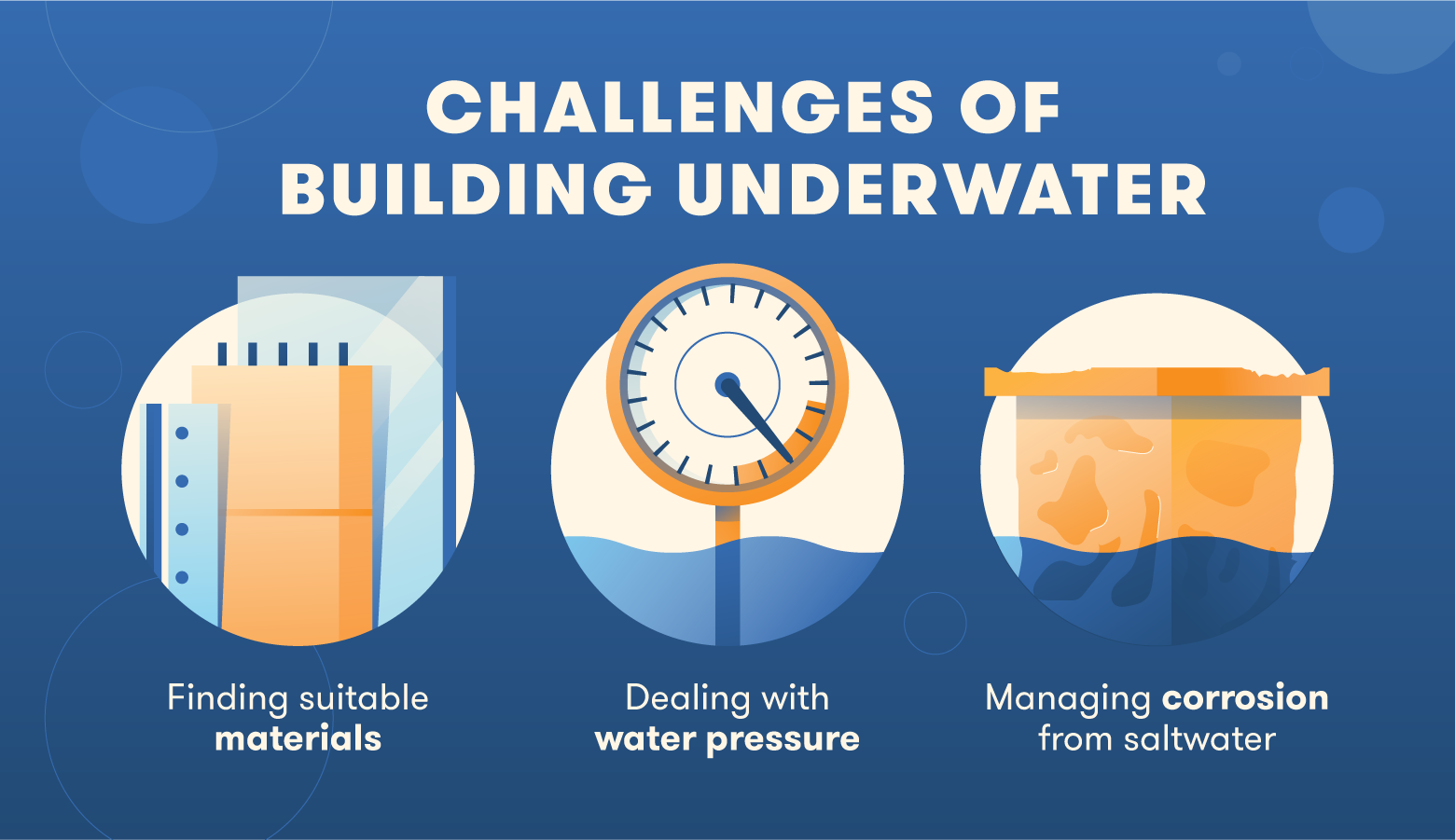 Some of these challenges include:

Impressively, some ancient civilizations figured out how to overcome these obstacles using adequate materials and simple methods of underwater construction to build supporting pillars for bridges over rivers.

When building in water, materials must be used that can withstand a variety of complications, including water pressure, corrosion, and erosion. 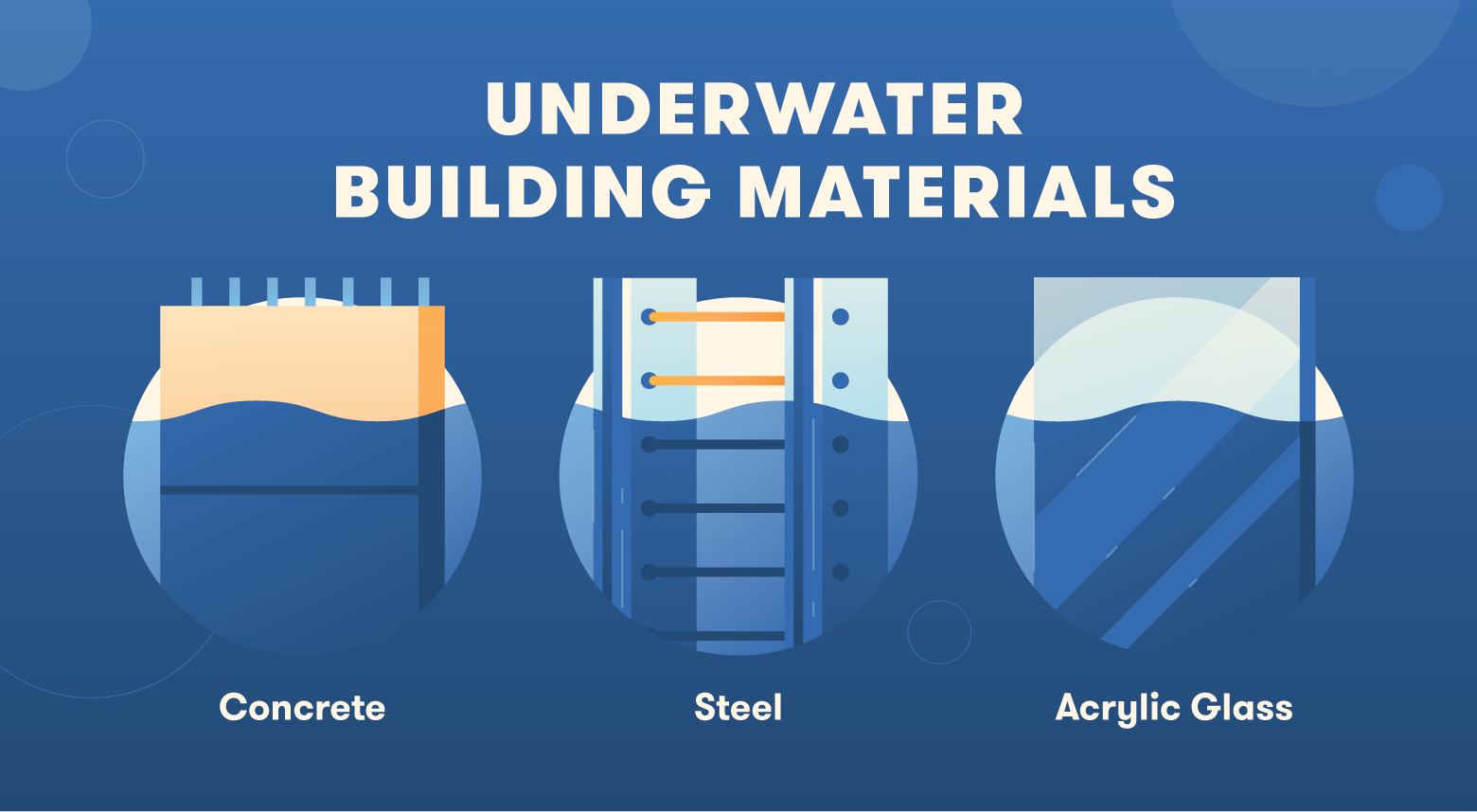 The most common materials used in underwater construction include:

With the right materials, construction companies are ready to use a variety of construction methods that make it possible to create impressive underwater structures.

Several major techniques have evolved over the years that enable construction companies and construction workers to build in bodies of water both large and small. 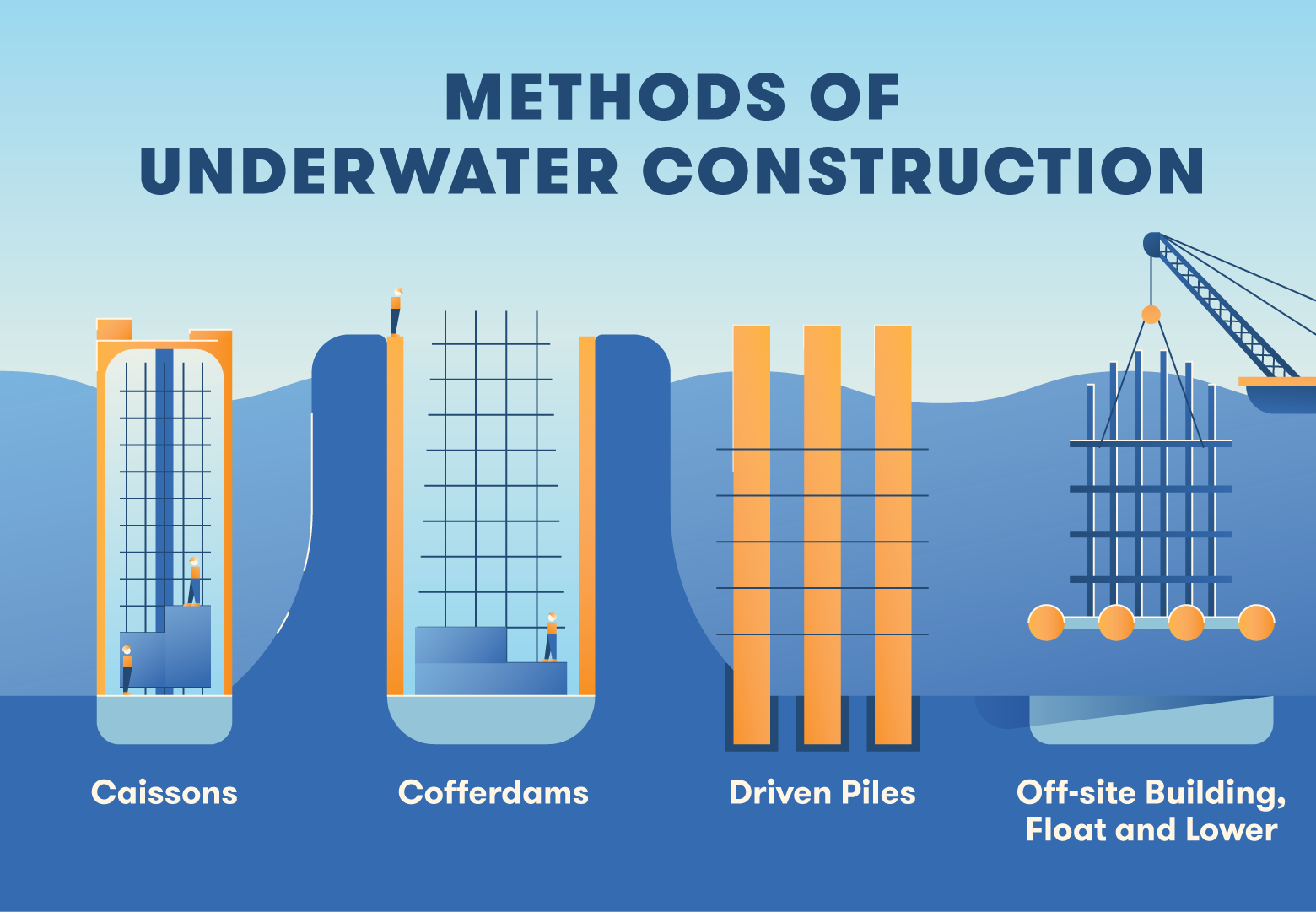 Some of the most important underwater construction methods include:

Interestingly, all of these “underwater construction” methods have the same underlying goal: avoid building underwater. Instead, water is diverted or avoided in various ways during construction—an essential approach because it is nearly impossible to actually build in water. Thus, “building underwater” is more about finding creative ways to work around water and make structures that can withstand it after construction is completed.

Caissons are watertight structures that can be lowered into the water while preserving a dry environment inside. Inside of the dry interior of an open caisson, workers can dig down in order to reach a solid surface that the caisson will rest upon. Eventually, caissons become part of the foundation of a structure, often a bridge or a dam.

While we don’t often think of bridges and dams as “underwater structures,” the truth is that many of their important elements are underwater. Many massive bridges would not be possible without the large supporting towers that hold up the spans that carry people and automobiles across.

For example, the Brooklyn Bridge, which began construction in 1870, used two large caissons in order to dig down to bedrock and form the foundation of the bridge’s towers. 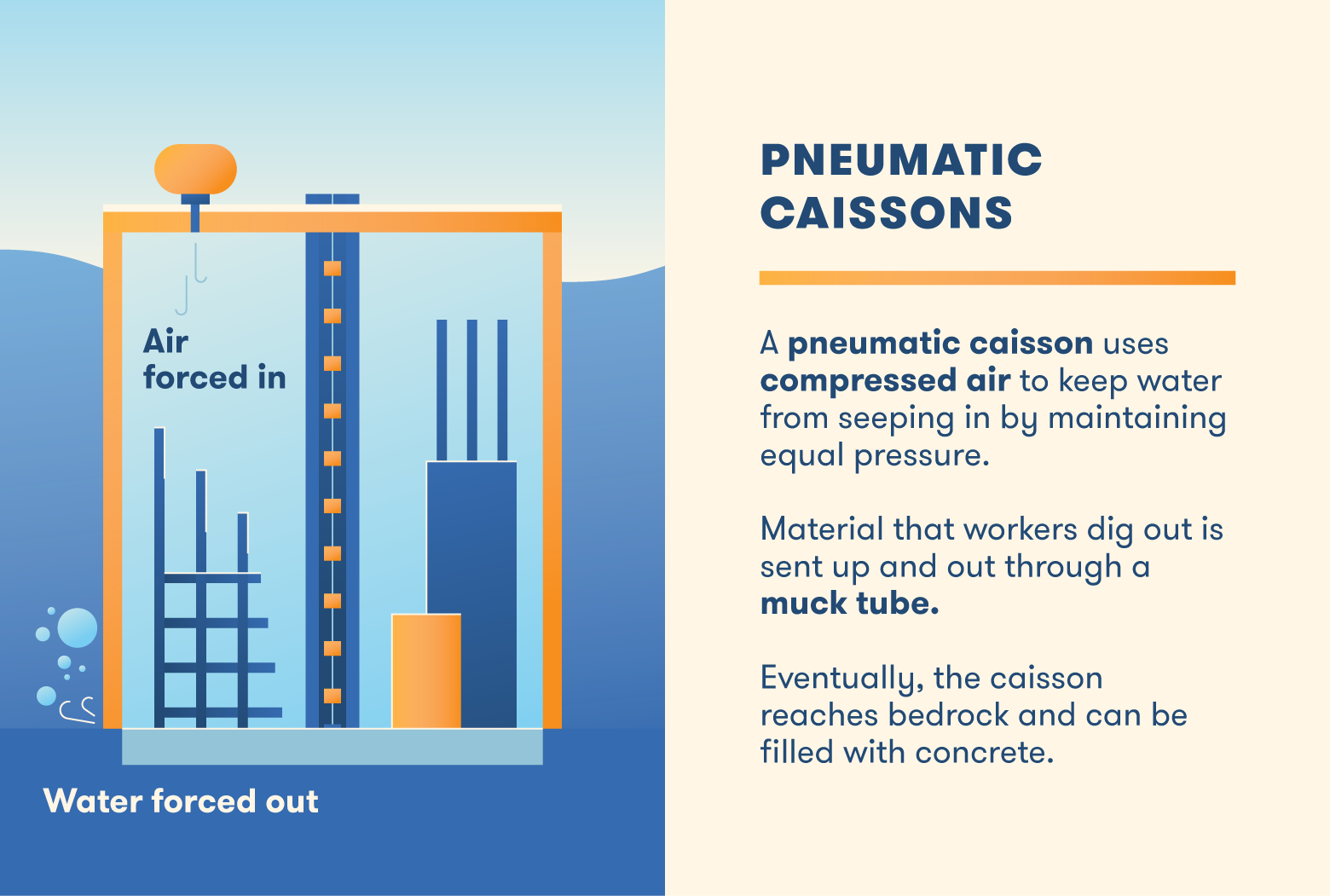 While they all employ the same basic principles, several different types of caissons exist:

While caissons are still used today, their utility is limited, so many situations call for the use of cofferdams instead.

Cofferdams are temporary enclosures that allow water to be pumped out, creating a dry environment for construction. As the name suggests, cofferdams work similarly to dams, preventing the flow of water from a particular area. A fully-constructed cofferdam looks like a large, walled pit with water surrounding it. 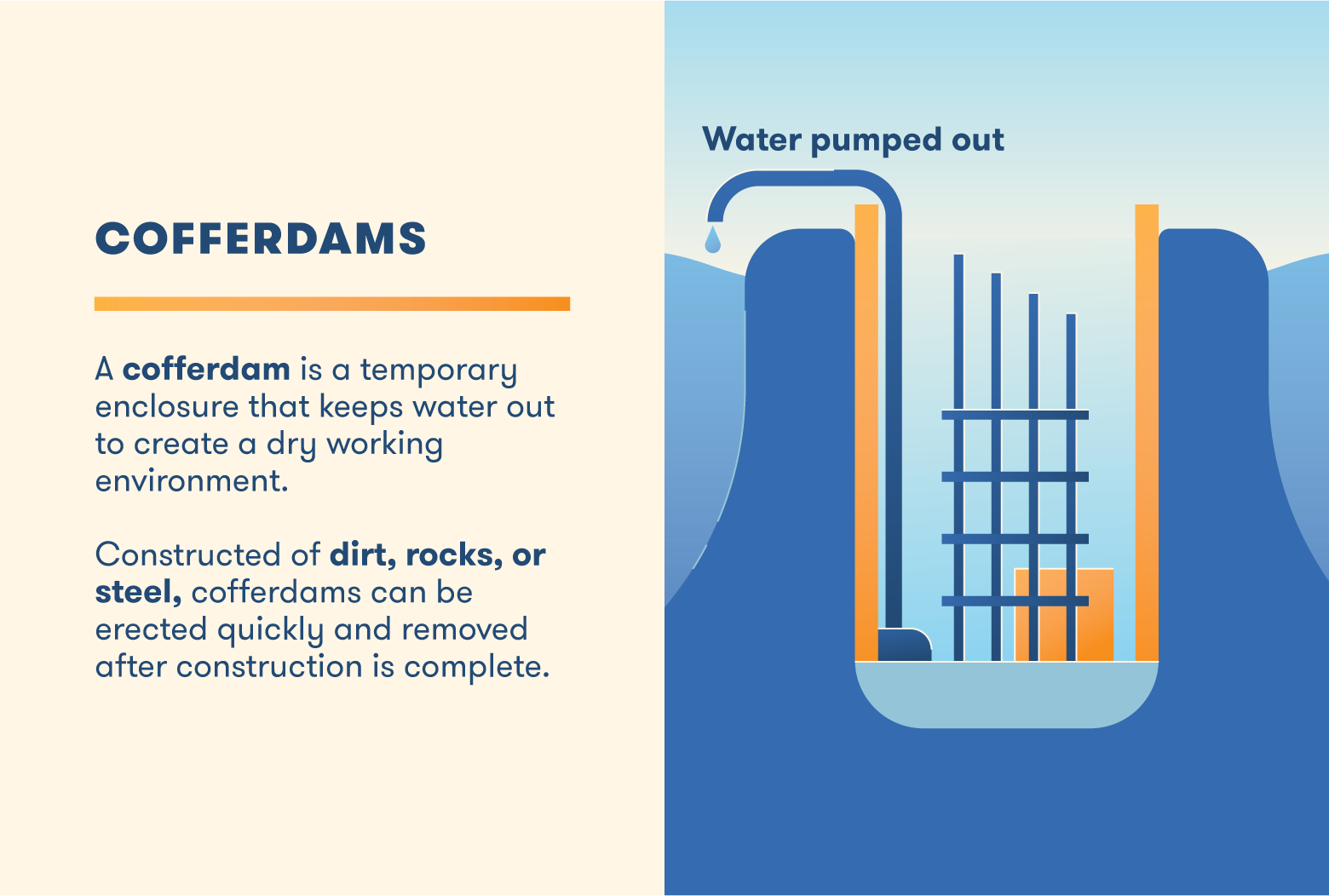 Cofferdams can be created from a variety of materials, including steel and rocks. The most basic type of cofferdam is made by simply piling up large amounts of dirt. However, these types of cofferdams often require some kind of reinforcement to prevent erosion.

Cofferdams can be used to build a variety of structures, from wharfs and piers to partially or fully submerged buildings. Cofferdams are also used in the construction of permanent dams—for instance, several cofferdams were erected to divert water from the Colorado River in order to build the Hoover Dam.

When building foundational elements underwater, driven piles enable crews to create sturdy structures without having to remove any water at all. Piles, which look like long, vertical columns, can be driven into the ground using a powerful hammer, creating a stable foundation for underwater or overwater structures. You can imagine piles as similar to nails being driven into a piece of wood, except in the case of underwater construction, the piles are being driven into layers of soil or rock. 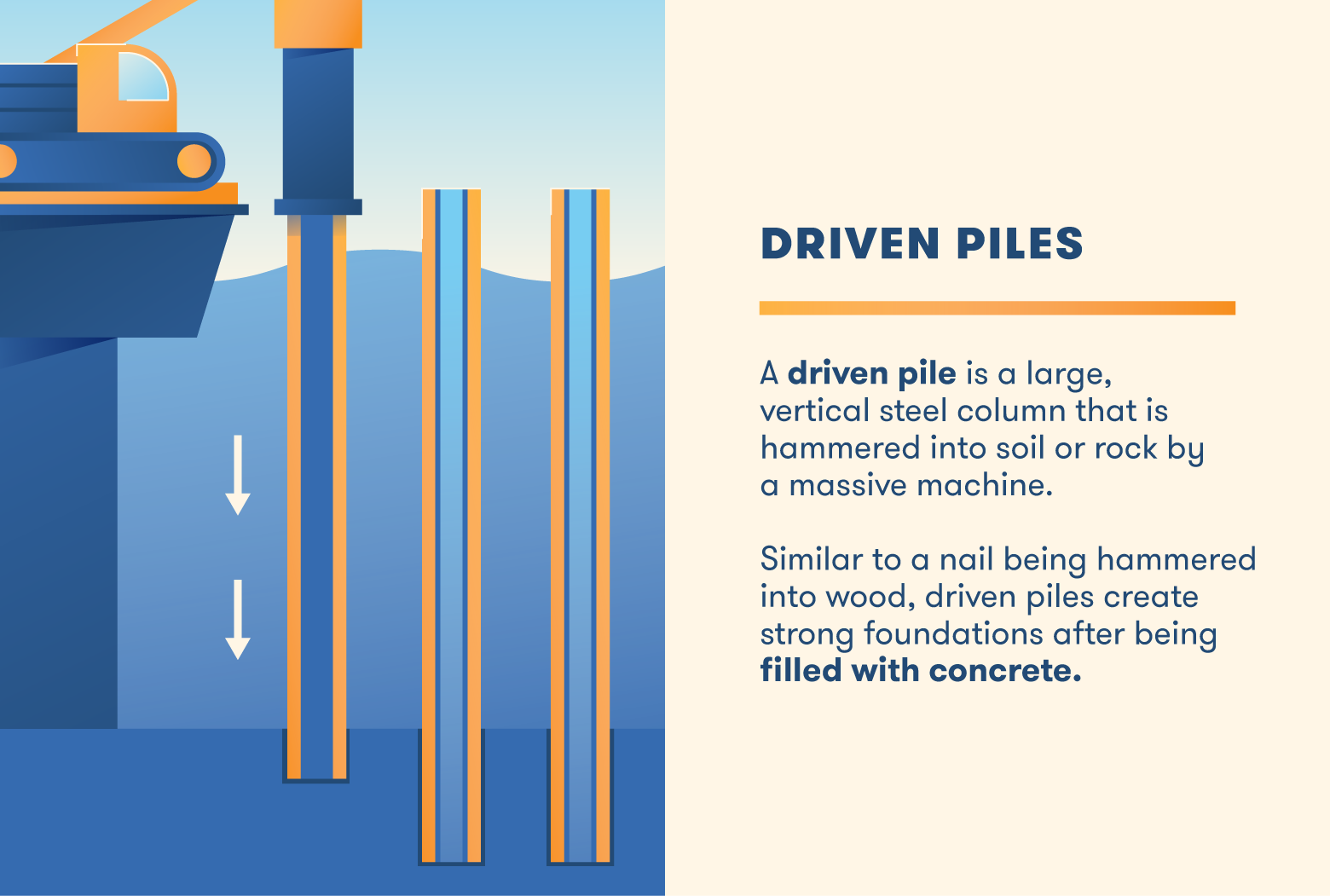 In underwater construction, piles are most often made of steel, though they have a partially hollow interior. After the piles are placed, a tube is used to fill the inside of the pile with concrete, which displaces the water that was previously inside the pile. Concrete is able to set even when surrounded by water, and what remains at the end of this process is a steel-reinforced concrete pillar with no water inside of it at all.Driven piles are one of the most cost-effective ways to build foundational elements of underwater buildings, which need to be securely attached in place to prevent moving with the water’s current. For example, driven piles were used to anchor Apple’s stunning partially-submerged store at Marina Bay Sands in Singapore. 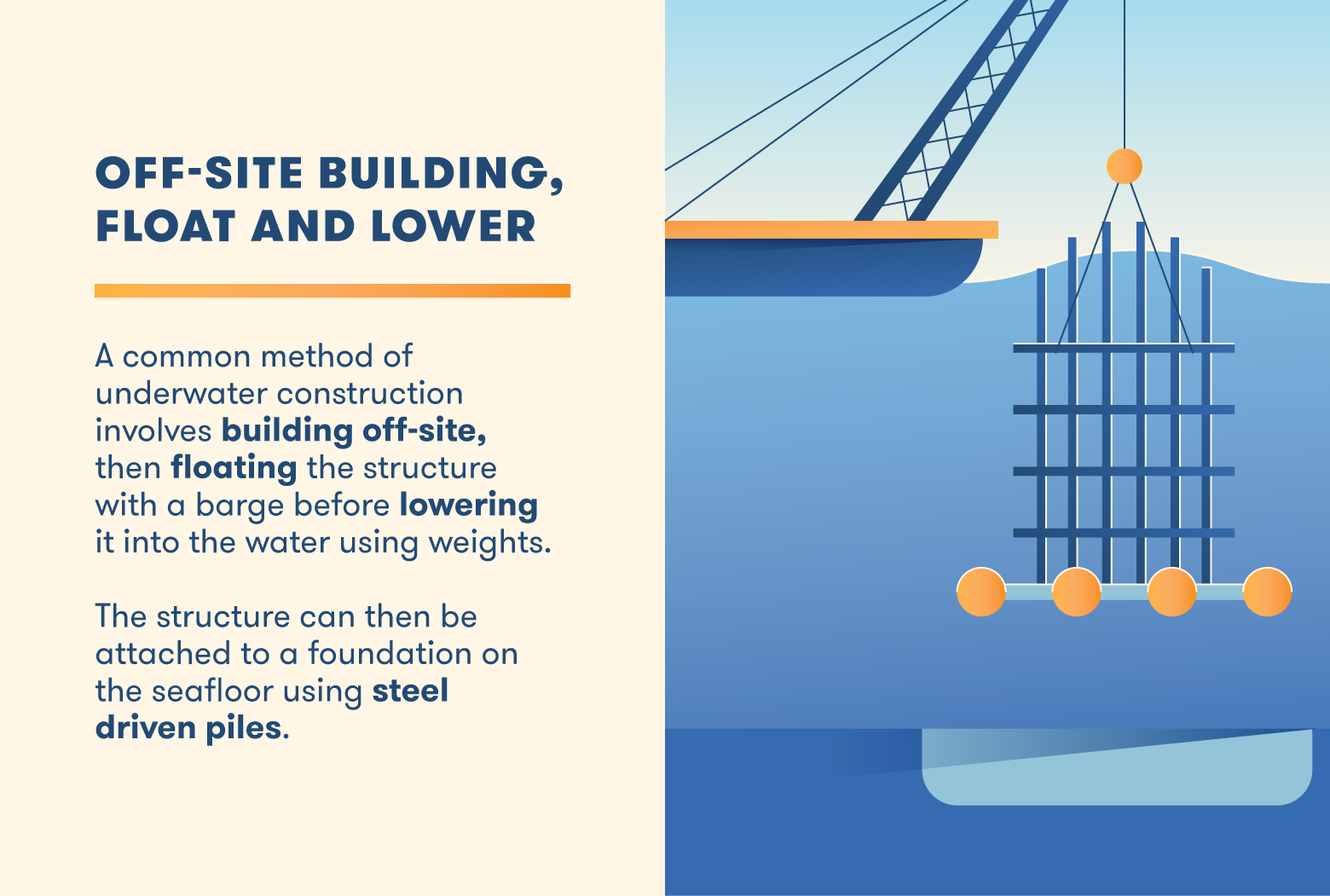 One structure that was built in this way is the Utter Inn, a small hotel in Sweden that was built on shore then later submerged in the middle of a lake. The hotel’s entrance is only accessible by boat.

Although this method of construction can be expensive, it is significantly more cost-effective than building directly underwater, which involves complicated tools, skilled divers and tremendous risks.

All of these construction methods—caissons, cofferdams, driven piles, and off-site building—enable the creation of incredibly beautiful and useful underwater structures.

Hundreds of underwater creations exist around the world—from research stations to hotels, railroad tunnels to nightclubs. No matter the differences between these various structures, they share one thing in common: enormous creativity in architecture, engineering, and construction was used to build them. The results vary from incredibly practical, like the Transbay Tube connecting San Francisco and Oakland, to stunningly beautiful, like the underwater suites at the Atlantis Dubai Hotel.

Below, we’ve compiled a list of five noteworthy underwater structures that you can visit around the world.

The Ithaa Undersea Restaurant, located in the island nation of Maldives, is a breathtaking acrylic structure located 16 feet below sea level. Constructed almost entirely of transparent acrylic, the restaurant offers its patrons panoramic views of the marine life surrounding the restaurant. 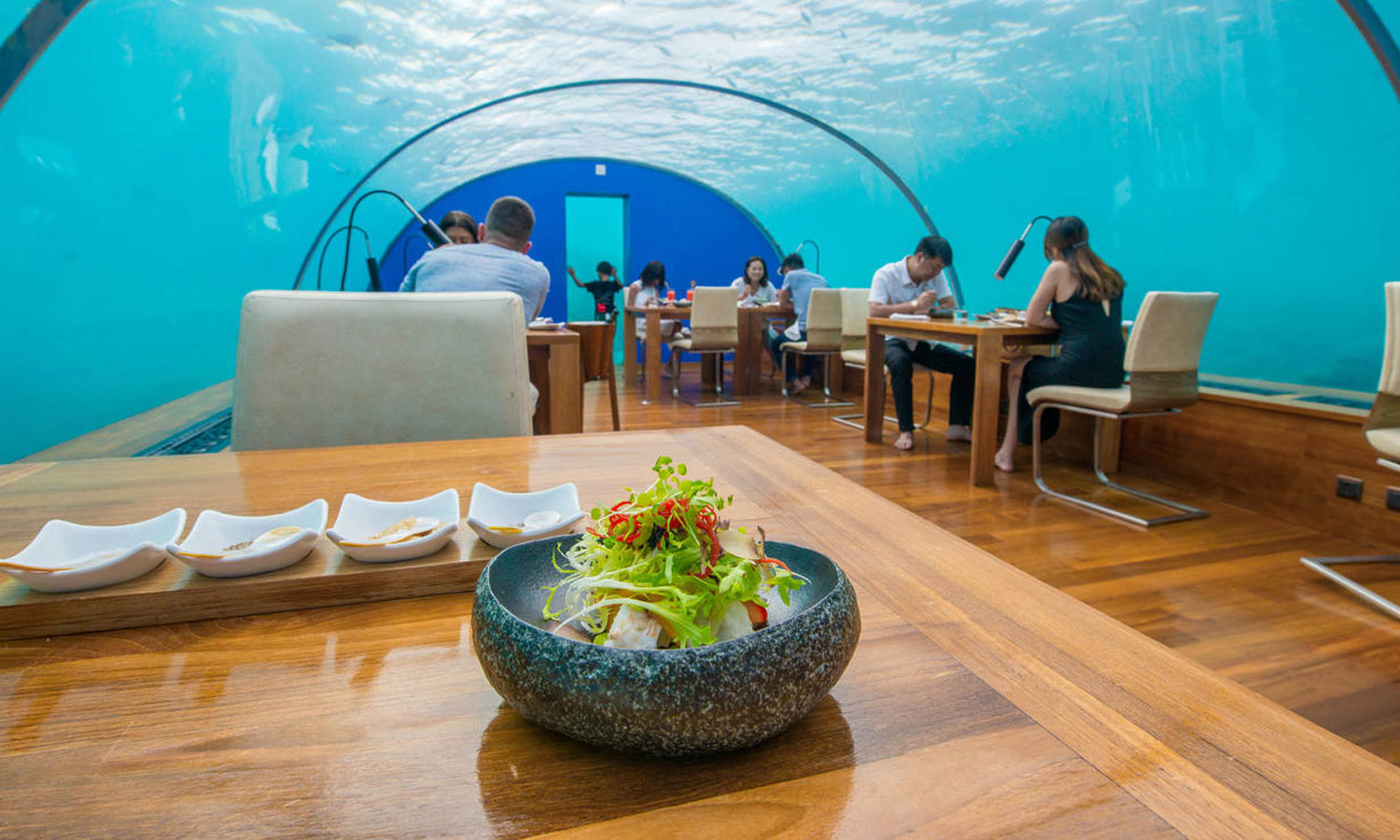 The restaurant, which is roughly 500 square feet, was built using the float and lower method. After being assembled in Singapore, Ithaa was transported on a barge, then lowered with the help of sandbags onto steel-driven piles that form its foundation.

The Atlantis Hotel in Dubai is located on The Palm, a human-made island in the shape of a palm frond. Though most of the structure is above ground, the hotel features several underwater suites 20 feet below sea level. After descending an elevator into the suites, guests are greeted by massive floor-to-ceiling windows with views of sea animals—even from the bed and bathtub. 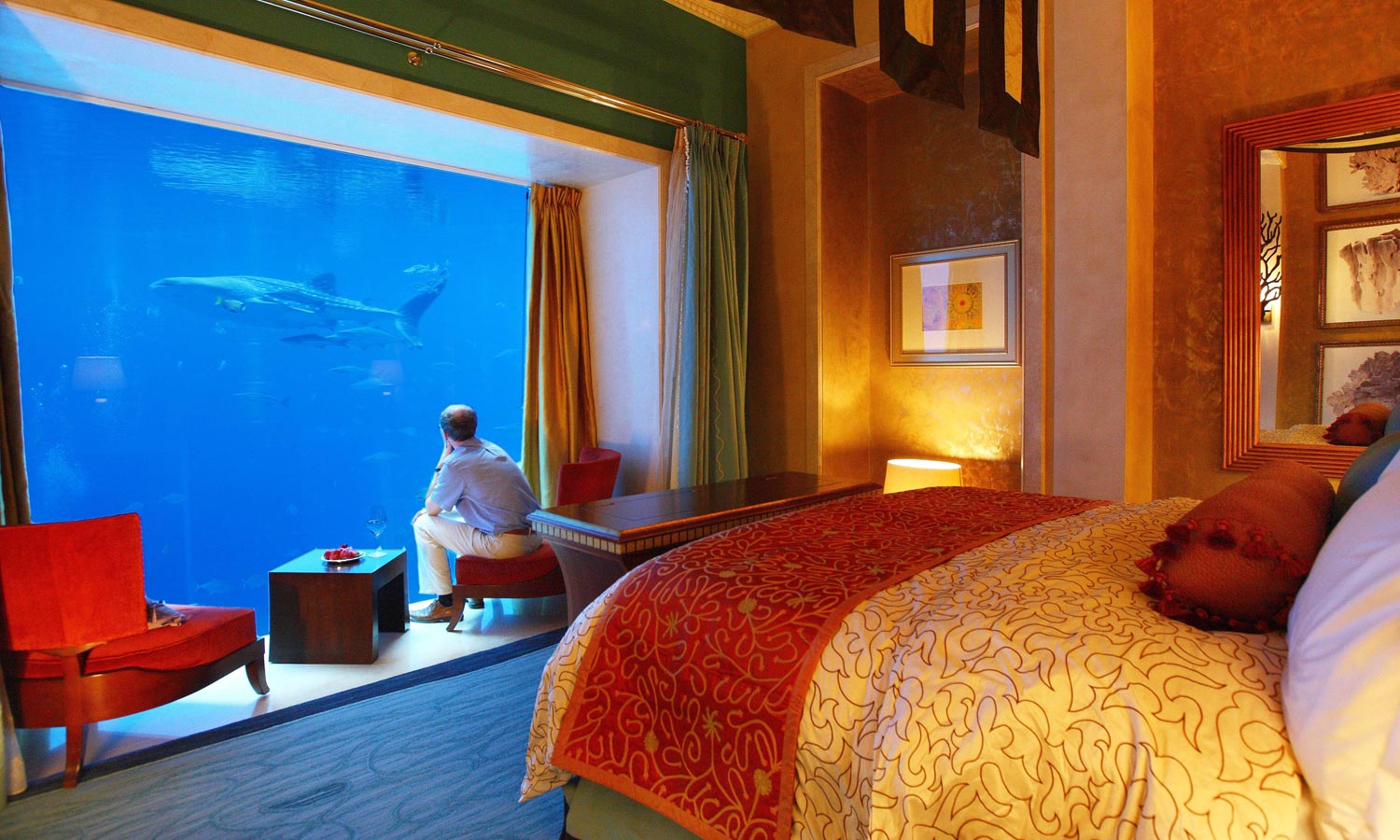 While details are scant about the construction of the underwater suites, above-ground construction involved modular units, which may have been used for the undersea portion as well. Additionally, since the Atlantis Hotel is situated on a human-created island, it is likely that cofferdams were used throughout construction.

The Transbay Tube is an underwater railroad tunnel that spans 3.6 miles, connecting Downtown San Francisco to West Oakland, carrying nearly 30,000 passengers an hour during the morning and evening commutes. Originally built in 1974, the Tube is an astounding feat of undersea construction, particularly due to concerns about earthquakes in California’s Bay Area. 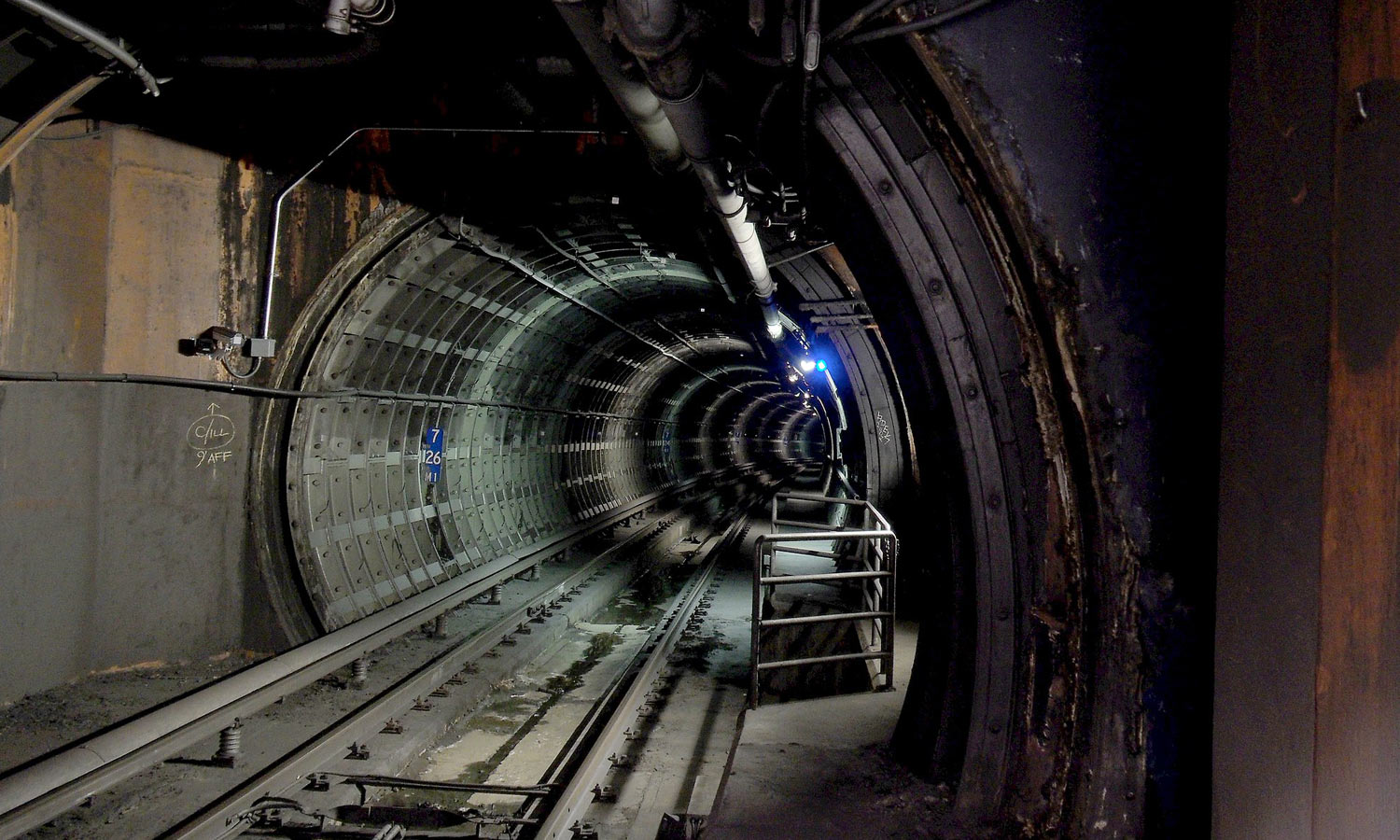 Consisting of 57 individual components, the Transbay Tube was built off-site, then lowered into place after being towed into the middle of the Bay by barges. Divers worked at a depth of 135 feet below sea level to connect individual pieces that were set on a trench in a precise, seismically-sound path.

Subsix, off the coast of the private NIYAMA island in The Maldives, is the world’s only underwater nightclub. Submerged 18 feet underwater and featuring floor to ceiling windows all around, the Subsix nightclub gives its guests a view of vibrant coral and marine life during a night of dancing. 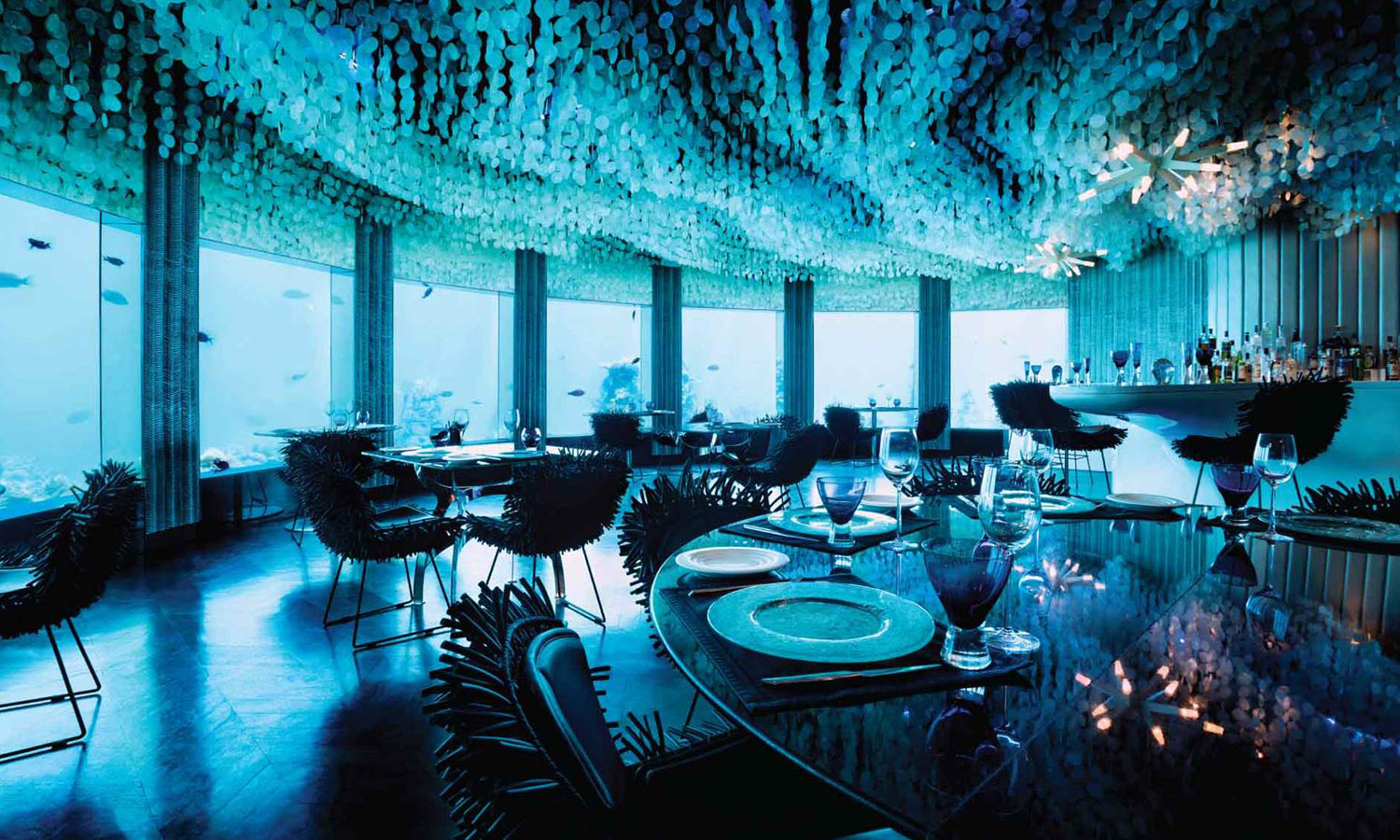 Built off-site and then lowered into place, the Subsix nightclub features complex construction due to its size and distance from the shore—nearly one quarter of a mile and only accessible by boat.

Located off the coast of Tanzania, the Manta Resort features one underground suite attached to a platform floating in the middle of the water. With windows on all four sides, guests in the suite can gaze upon the surrounding sea life while sitting on a king-size bed. 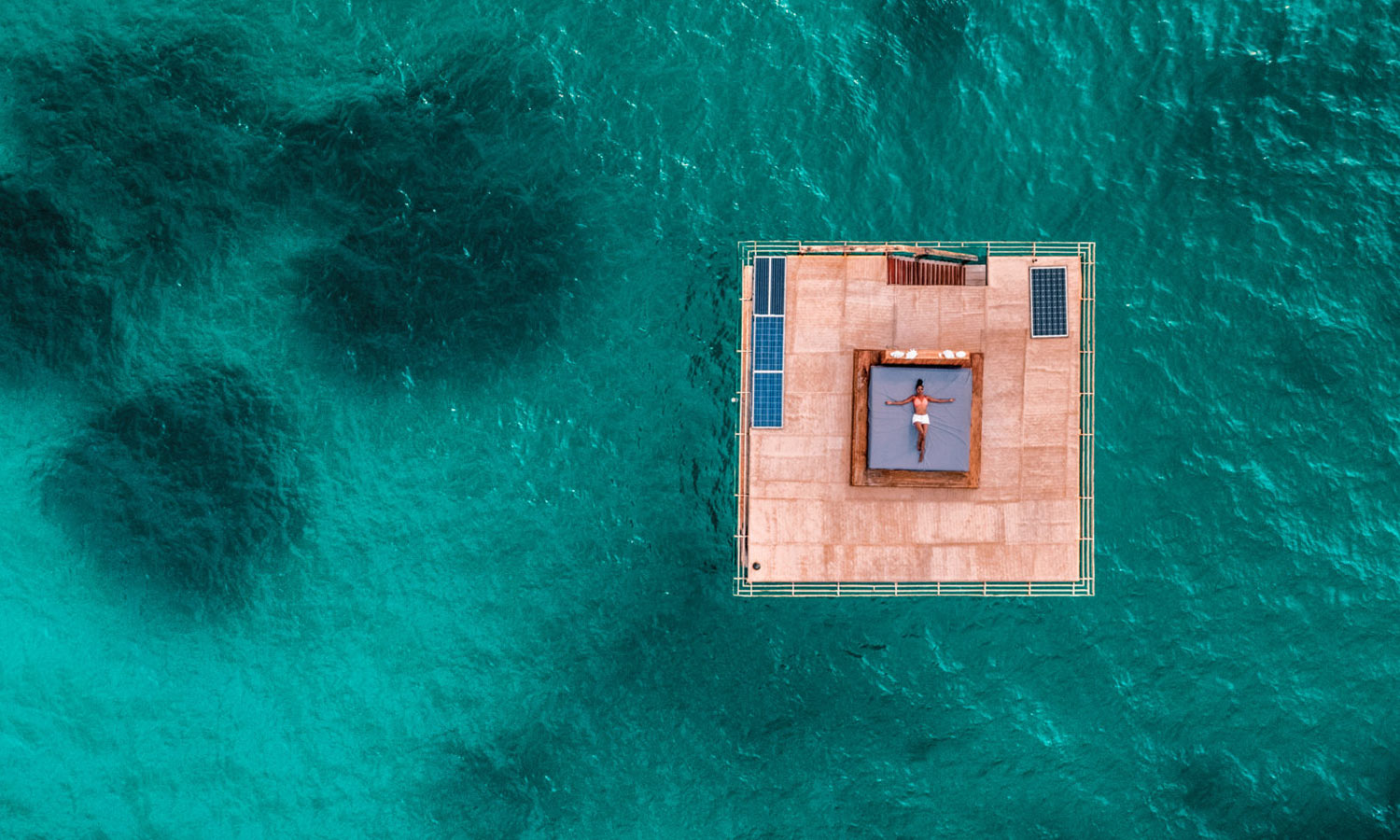 The Manta Resort’s underwater suite is a floating platform with both an above-water and below-water portion, both of which were assembled jointly off-site. After construction, the platform was towed into place, then anchored by attaching steel cables to four corners of the building as well as the seafloor.

The Future of Underwater Cities

With all of these incredible underwater structures already existing around the world, a natural question emerges: Why can’t we build underwater cities?

The short answer is that we can. We have the materials, technologies and construction techniques to support human cities under the sea. However, underwater cities, at least right now, have a cost that makes them unreasonable, which is why we only tend to see underwater structures pop up at expensive resorts around the world. 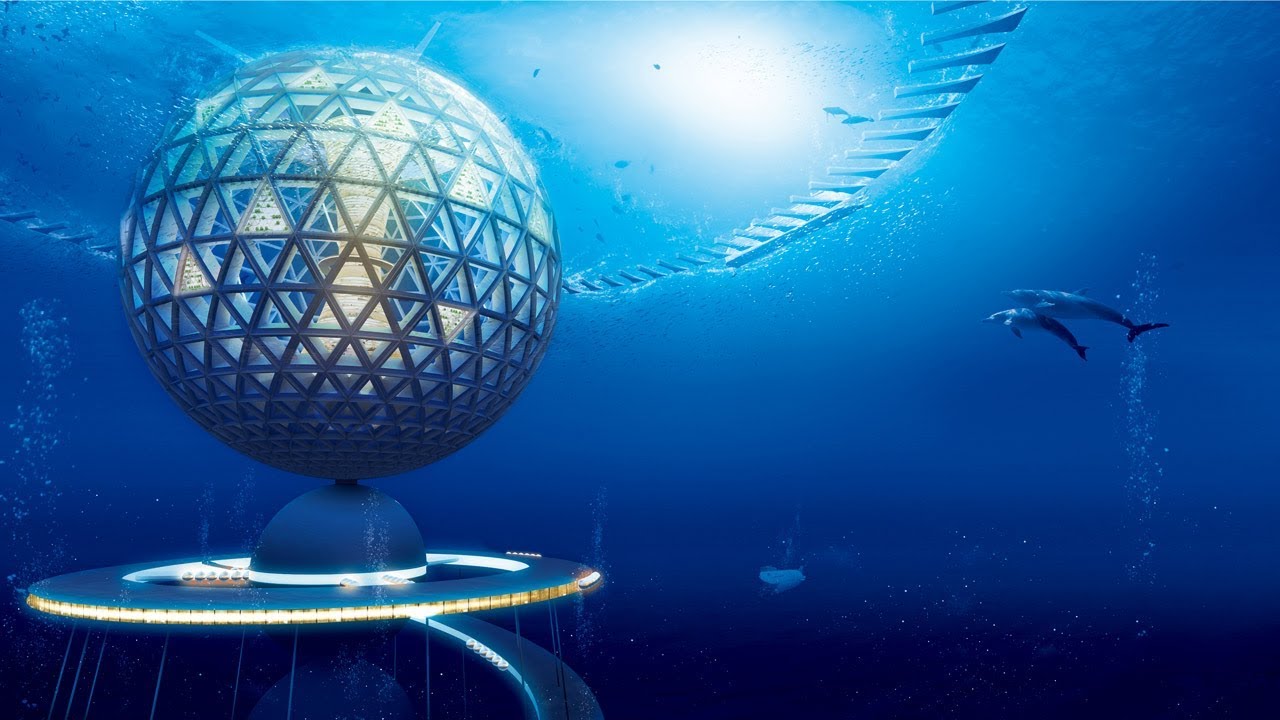 Nevertheless, architects and engineers have already begun considering plans for elaborate underground cities in various forms. One such plan, from the Japanese Shimizu Corporation, imagines an undersea spiral spanning from the ocean’s surface down to the seafloor. This type of structure could house 5,000 inhabitants, generate its own power, and withstand natural disasters like earthquakes and tsunamis. However, the project is estimated to cost at least $26 billion and currently only exists as a fantasy.

Still, human innovation has made it possible to build underwater structures in ways that seemed impossible just a short time ago. It may not be long before floating cities, submerged cities or cities on the seafloor become a reality.

18 New Building Materials That Will Revolutionize Construction
10 Notable Construction Equipment Suppliers
What is Building Automation? 4 Environmental Benefits
What Are the Functions of a GPS Tracking System?
How Construction Robots Will Change The Industry
Augmented Reality in Construction: 6 Applications
30 Construction Startups Emerging as Industry Leaders
How 3D Printed Homes Are Changing the Industry
25 Must-Read Construction Books for 2022
The Robots Are Coming! Autonomous Construction Vehicles
Technology Share this article: