How to Design a Net Zero Energy Building

The building sector emits such huge amounts of greenhouse gases that urgent action is necessary to avert climate disaster. Net zero energy buildings will play a big role in curbing global warming in the decades to come.

Most people probably think of fossil fuels in transportation when they think of global warming and greenhouse gas emissions. So it’s surprising — and important — to note that the building sector produces nearly 40% of the world’s emissions.

To meet the goals of the Paris Agreement, the building sector must attain net zero carbon by 2050. That means billions of buildings worldwide will need to comply to keep global warming below 2 degrees Celsius. The Biden administration also set a goal of net zero carbon emissions by 2050.

What Is a Net Zero Energy Building?

These types of buildings can take energy from electrical grids, and send unused energy back to offset their energy consumption.

They all mean the same thing. They also might be referred to as “green buildings.”

There is a difference between “net zero” and “zero.” For example, New York state law says 85% of reductions must come from the state’s own industrial and energy emissions. The remaining 15% may come from carbon offsets, including in forestry and agriculture.

Carbon offsets work whether an organization stops its own emissions or offsets its emission reductions elsewhere. The climate effects are the same.

During the 1970s, solar panels on the roofs of homes began harnessing the sun’s power. This reduced energy costs and helped the environment at the same time. California and other states created programs to encourage their use, but they haven’t gotten us where we need to be. And while solar panels are important, they can’t do the job alone.

This is because net zero energy building has to be far more holistic in its approach. It needs to include a number of factors that promote energy conservation. It also should go well beyond single-family renewable energy homes and residential buildings. It must include other building types, including commercial buildings.

Some of the ways to achieve net zero energy will be covered in the sections that follow. 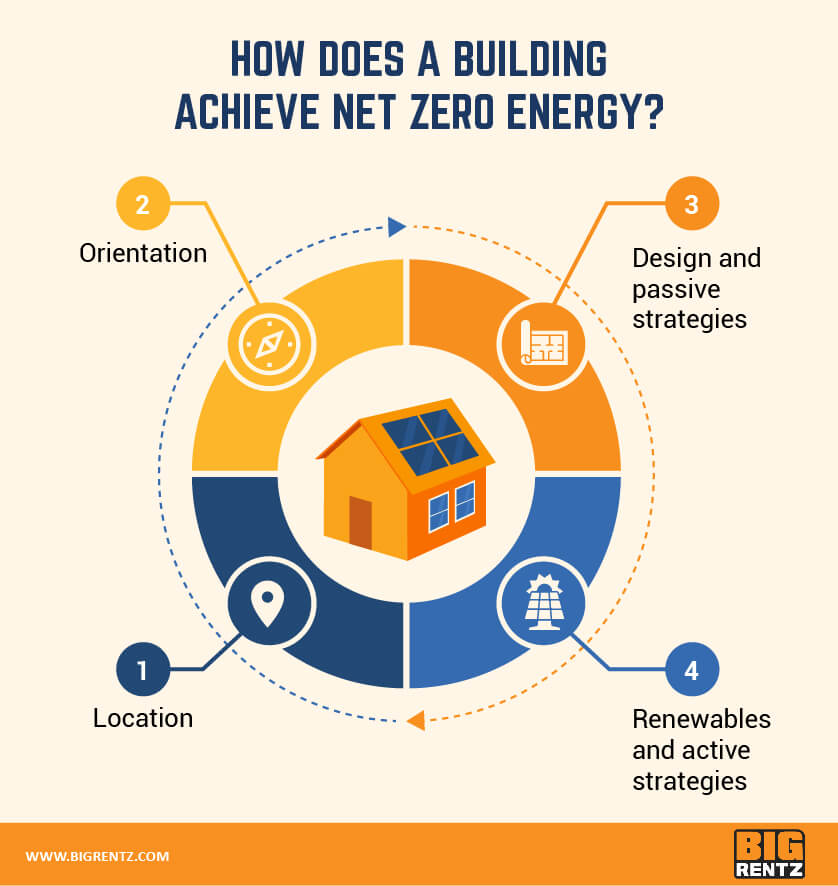 How Does a Building Achieve Net Zero Energy?

To construct a net zero energy building, you must take several conditions into consideration. The building site, where you are building, the climate and the building’s exposure all have an effect.

The orientation of the building depends on the success of achieving net zero energy. Certain renewable energy generation mechanisms, like solar panels, work best when the building is facing south.

But factors that conserve energy are also important. Besides harnessing the sun’s energy, you can conserve by orienting your building to take maximum advantage of the shade. In warm climates, this means you’ll need to use the air conditioning less to keep your building cool.

Lighting is another important factor. Lighting systems can account for almost 25% of a building’s total energy consumption. Orienting your building to take advantage of natural lighting can reduce that load. Window arrangement and the use of skylights are strategies that can be considered when deciding on a building’s orientation.

You can also situate your building to take advantage of natural breezes. Using natural resources to power your building’s energy systems and reduce energy requirements, will conserve resources at the same time.

Building design is next. Make sure to select the best-insulating materials possible so the building conserves as much energy as possible. Windows (dual- or, better, triple-pane and effectively sealed) can pose a major factor in conserving energy.

Passive strategies aren’t about energy production. They’re about minimizing energy usage — and maximizing energy performance. In fact, they operate without energy use, which is why they help buildings achieve net zero energy use:

ASHRAE, or the American Society of Heating, Refrigeration, and Air Conditioning Engineers, has created standards that apply to building design. The group, founded in 1894, has 87 active standards and guideline project committees that address some of the following topics:

The final step in designing high-performance buildings is determining the most relevant renewable energy sources based on the building. If the building is industrial scale, wind generators might be used on-site rather than off-site. Solar panels might be the way to go for new homes or even ones that can be converted.

Active strategies reduce energy consumption during the building process through the use of renewable energy strategies, such as:

Net zero energy buildings react in various ways to their local electricity grid. Whether the grid is integrated or conventional affects the way it interacts with buildings and strategies (such as renewable energy sources).

Put another way, the two types of ZNE building typologies must work together to optimize grid performance:

Utilizing both passive and active strategies will prove most beneficial to the relationship between the utility grid and ZNE buildings. 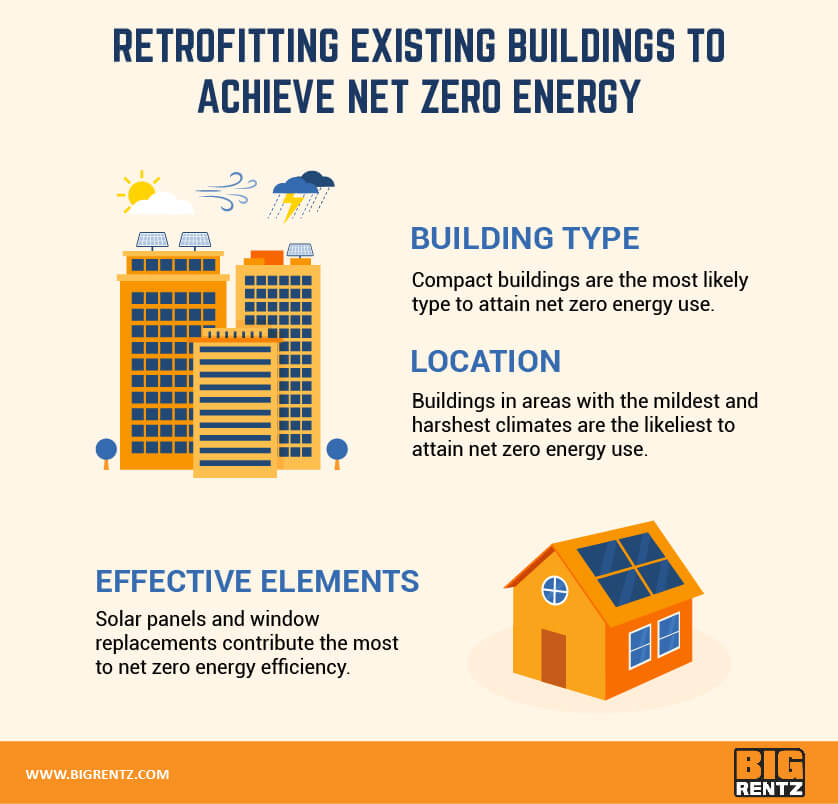 Energy retrofit can be defined as adding new technologies to existing buildings to reduce energy consumption. The process of retrofitting a building takes time, planning, plus substantial materials, construction equipment, and labor.

Retrofitting existing buildings usually is more environmentally friendly and less expensive than new construction. This is true when the building location, current design, and building stability are considered.

Here’s what we do know, based on studies, about the success rates of retrofitting as well as associated costs:

Retrofit energy projects are often used to improve efficiency. There’s a pressing need for them because the average age of the U.S. home is nearly 40 years. But it isn’t just important for buildings that went up in the early or mid-20th century. Buildings constructed to meet energy codes in place as recently as 1999 use 67% more energy than those built today.

Retrofits not only work as efficiency measures; they’re also cost-effective because they can reduce operational costs. Two strategies are particularly useful:

Before undertaking an energy retrofit, it’s helpful to create an action plan that includes the following steps.

5 Ways to Retrofit a Building for Net Zero Energy Savings

Furthermore, every case is different, so there’s no one-size-fits-all approach to retrofitting. The amount of work depends on how extensive the modifications need to be. That, and several other factors: the climate, the building’s original design, its structural stability, and materials you use. These also affect the cost of a project.

Although retrofitting is almost always less expensive than starting from scratch, older buildings that need extensive work can require significant investments in terms of materials, equipment, demolition disposal, and labor.

Tax incentives and other stimulus can offset some of the long-term costs, along with future energy savings.

Here are five ways to retrofit your building to make progress toward a net zero goal:

Windows are similar to insulation. They prevent climate-controlled air from escaping while keeping air and water from getting into the house. Energy Star provides a list of efficient windows.

Retrofits are often sizable projects and may require heavy equipment, especially if extensive new materials are being introduced. You may consider renting construction equipment to help. 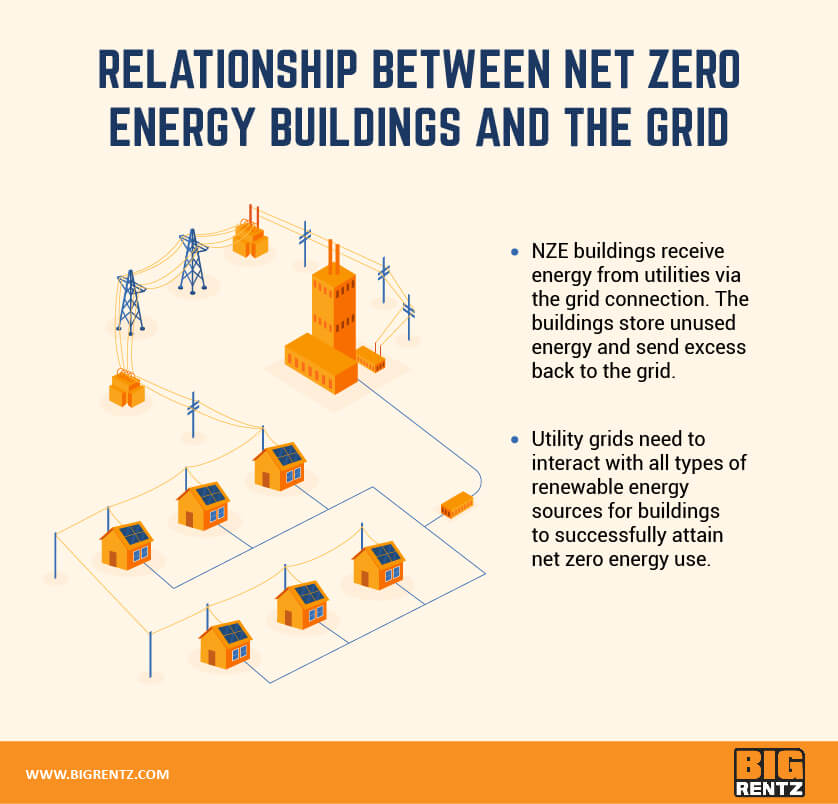 Despite the increased production of renewable energy, we don’t have the technology to store the energy on a large scale. Hydroelectric dams alone aren’t nearly enough.

As discussed earlier, a grid connection is needed to help buildings achieve net zero energy. It sends any excess energy buildings produce back to the utility grid.

This involves a concept called load flexibility, under which demand can be shifted to accommodate fluctuations in wind and solar supply. There will be times of peak demand. But there will also be times when surplus power is generated using active renewable energy strategies.

Load flexibility involves full connectedness to the grid, which works like this:

Billions of buildings need to be renovated or built at net zero to reduce global warming and meet the Paris Agreement.

Sharing these goals, the National Renewable Energy Laboratory works on the research and development of renewable energy and energy-efficient technologies.

This investment will impact the climate crisis by:

The Department of Energy has set goals or metrics to focus on energy efficiency and renewable energy. Among them:

States are getting into the act, too. New York’s 2019 legislation created goals of 100% carbon-free electricity by 2040 and net zero emissions by 2050. Hawaii adopted a 100% target in 2015. And California, Colorado, Maine, New Jersey, New Mexico, Oregon, and Washington have passed major climate change legislation.

In the private sector, continued expansion in the retrofit market combines with new construction for net zero energy buildings.

Still, to make a significant difference in global warming, energy efficiency investments and grid interactivity must increase dramatically. This means increasing building retrofit rates from about 1% a year to more than 5% a year.

Active and passive strategies must be employed in concert. But builders can’t stop at energy efficiency. Buildings must be fully interactive with the grid and able to take advantage of flexible load management.

The challenges are significant, but the methods of meeting and overcoming them are known. We just need to accelerate the methods and make them work together to maximize energy efficiency. If we do this for new and existing buildings, we can meet the goals we’ve set for 2030 and 2040. We can even meet those for 2050, as we work to identify new, longer-term goals.

How Are Bridges Built? A Visual Guide
How to Remodel a Store to Boost Sales
Concrete Scarifier vs. Grinder: How To Choose
The Costs of Building Iconic Pop Culture Structures
How to Read Construction Blueprints
How to Design Bird-Safe Buildings
Sustainable Construction: Methods and Benefits
Video: Six Figures, No Suits Episode 2 – Dam Micropiles
What Is Value Engineering in Construction?
The Ultimate Guide to Building a Generator Enclosure