The State of America’s Infrastructure The United States’ physical infrastructure is an essential asset that, according to the U.S. Chamber of Commerce, drives “growth, jobs, safety, and global competitiveness.”

But even the U.S. Chamber of Commerce agrees that the nation’s public infrastructure, which consists of bridges, waterways, airports, railroads, drinking-water systems and wastewater systems, is in need of maintenance and repairs.

Read on below where we’ve outlined the basics that everyone should know about American infrastructure, focusing on seven main sectors: bridges, roads, the rail network, aviation, drinking water, wastewater and energy.

The Troubling State of U.S. Infrastructure

The American Society of Civil Engineers’ (ASCE) current grade for U.S. infrastructure is a D+, estimating that the country needs to spend about $4.5 trillion by 2025 to improve the entirety of its infrastructure. Check out how six of the most important types of U.S. infrastructure fared in order of the best to worst:

Nevertheless, rail infrastructure has an uphill battle in terms of challenges ahead, especially when it comes to passenger railways. Nationwide, locomotive infrastructure is aging quickly and restoration project remains underfunded. The state of Hawaii has no rail lines whatsoever, which is a very stark contrast to Texas’s 10,500 plus miles of freight railroads across the state.

Still, with over 32.5 million people using the rail network in 2019, it’s clear that public rail lines need to improve to ensure the safety of these passengers. As of 2020, Amtrak’s public backlog of necessary improvement projects is estimated to be over $33.3 billion now. 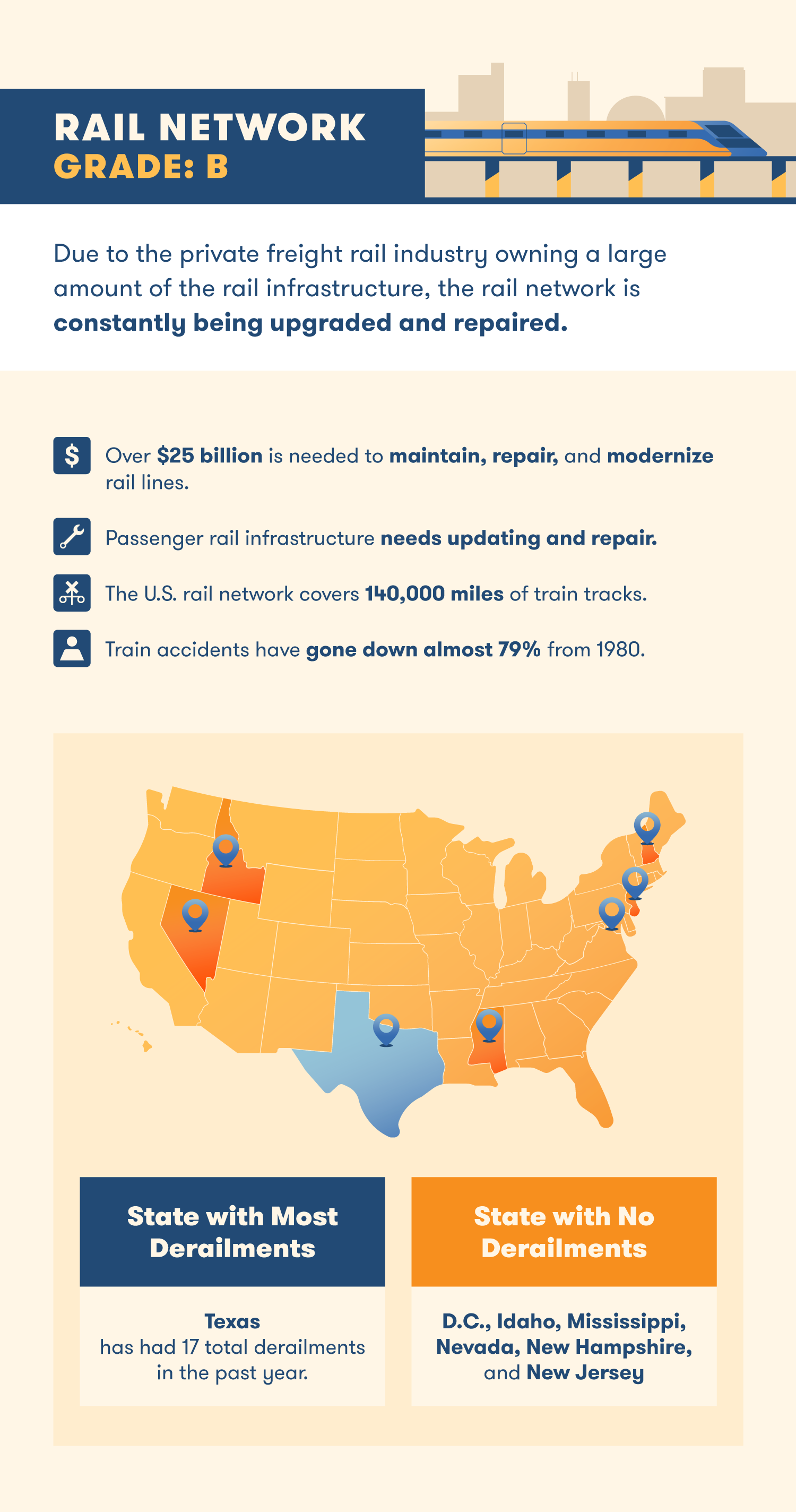 Thirty-eight percent (235,020) of all US bridges have identified repair needs. Although they aren’t about to collapse in the middle of rush hour, they need plenty of attention before existing issues deteriorate to a point where the structures are unsafe. 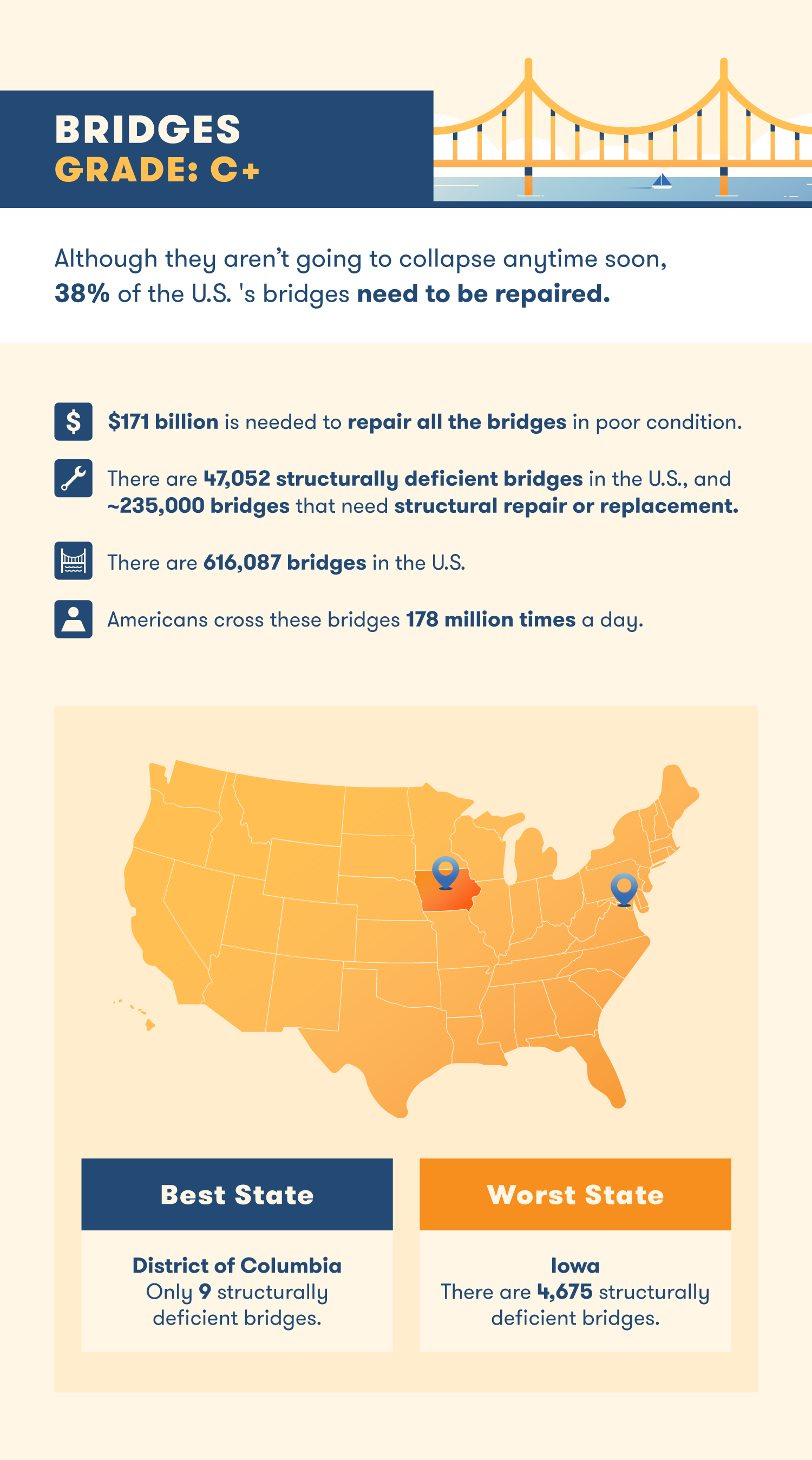 The U.S. energy infrastructure sector is in dire need of an overhaul. Most of the country’s electric transmission and distribution lines were constructed in the ‘50s and ‘60s and now need a 21st-century update. Current energy infrastructure is a combination of modern and practically ancient technology that can be very unreliable. Upgrading grid infrastructure will help meet modern energy needs and protect it from future issues.

One way to update energy infrastructure would be by investing in renewable energy, as it’s the fastest-growing source of electricity generation and would help meet all the needs and challenges the infrastructure will inevitably face as well as help sustain the economy and create jobs.

It’s generally agreed that Alabama, Louisiana, and West Virginia have some of the worst energy infrastructures in place due to a variety of factors, including weak energy policies and poor power grid reliability. Conversely, some of the best states with energy infrastructure including Oregon and Minnesota. But even in relatively high-ranking states for energy, climate change and overall aging infrastructure are encouraging more people to look to upgrade the energy sector to be more reliant on renewable sources. 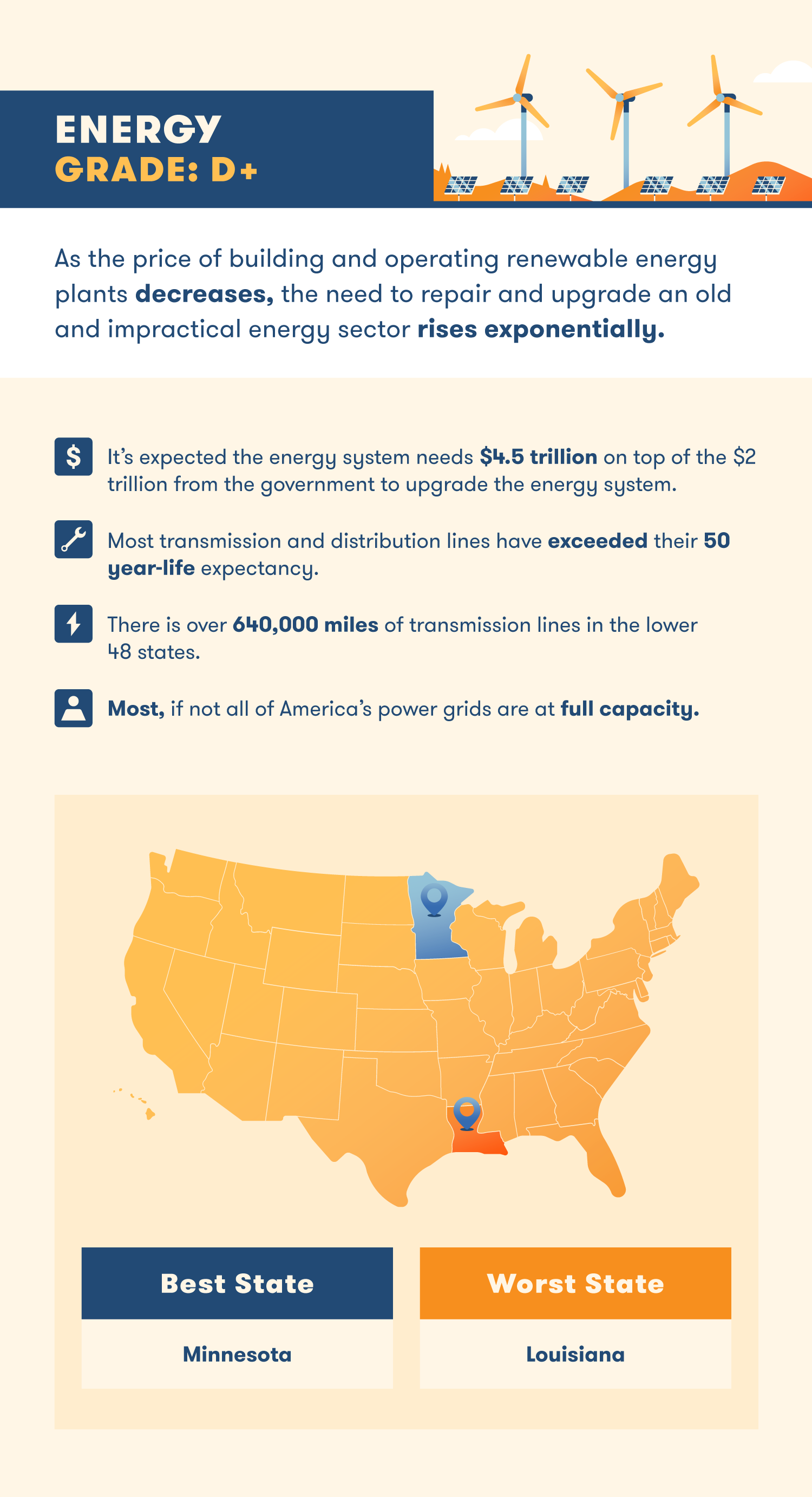 There are over 14,748 wastewater treatment plants in the country. Adequate wastewater infrastructure plays a vital role in the overall health of the country. Keeping this section of infrastructure running and up to date is crucial for the health of the public and the sustainability of the environment. In fact, treatment plant demands are expected to grow by over 23 percent by 2032.

According to the Associated General Contractors of America, the country needs to invest between “. . . $400 and $600 billion over the next 20 years for safe drinking water and wastewater treatment infrastructure.” However, the EPA estimates that $271 billion is needed over the next 25 years.

Due to the increase of population and urban sprawl across the U.S., more water treatment and sewage lines need to be installed.

With over 2.7 million passengers per day, U.S. airlines are some of the most used methods of travel and transportation in the country. In fact, the United States’ air travel industry moves more people than any other country’s system. However, the aviation infrastructure (which consists of security, capacity, etc.) has not kept up with the massive demand, resulting in overcrowded airports all across the U.S.

The Phoenix Sky Harbor airport is considered one of the best airports in the country, whereas New Jersey’s Newark Liberty International Airport is ranked as one of the worst due to congestion, delays, and a variety of other factors. 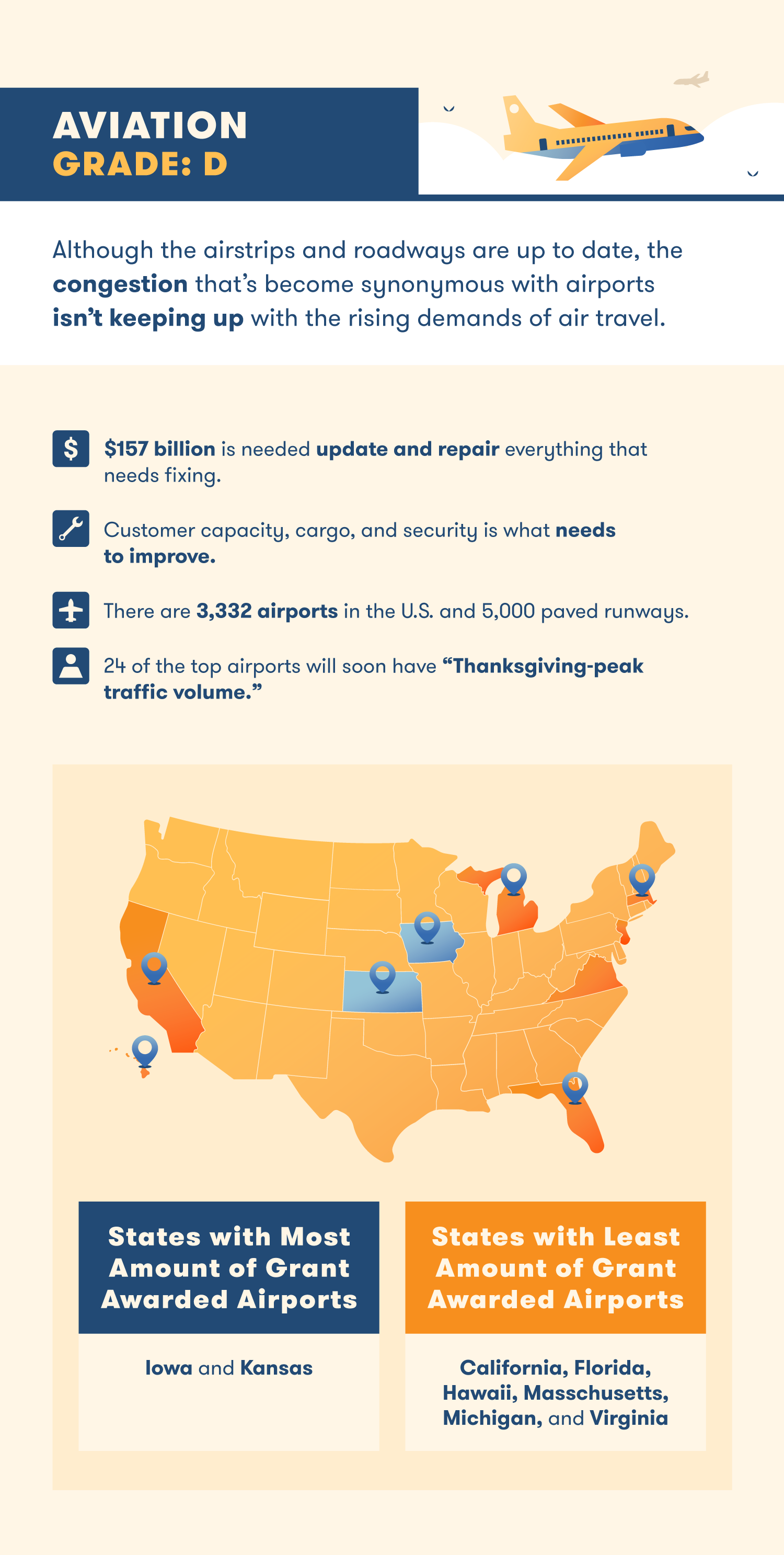 Public roads are one of the most visible and important forms of infrastructure. In the U.S., there are over 4.1 million miles of road that stretch all across the country. Unfortunately, years of neglect and apathy have left the country’s roads in dire need of repair. 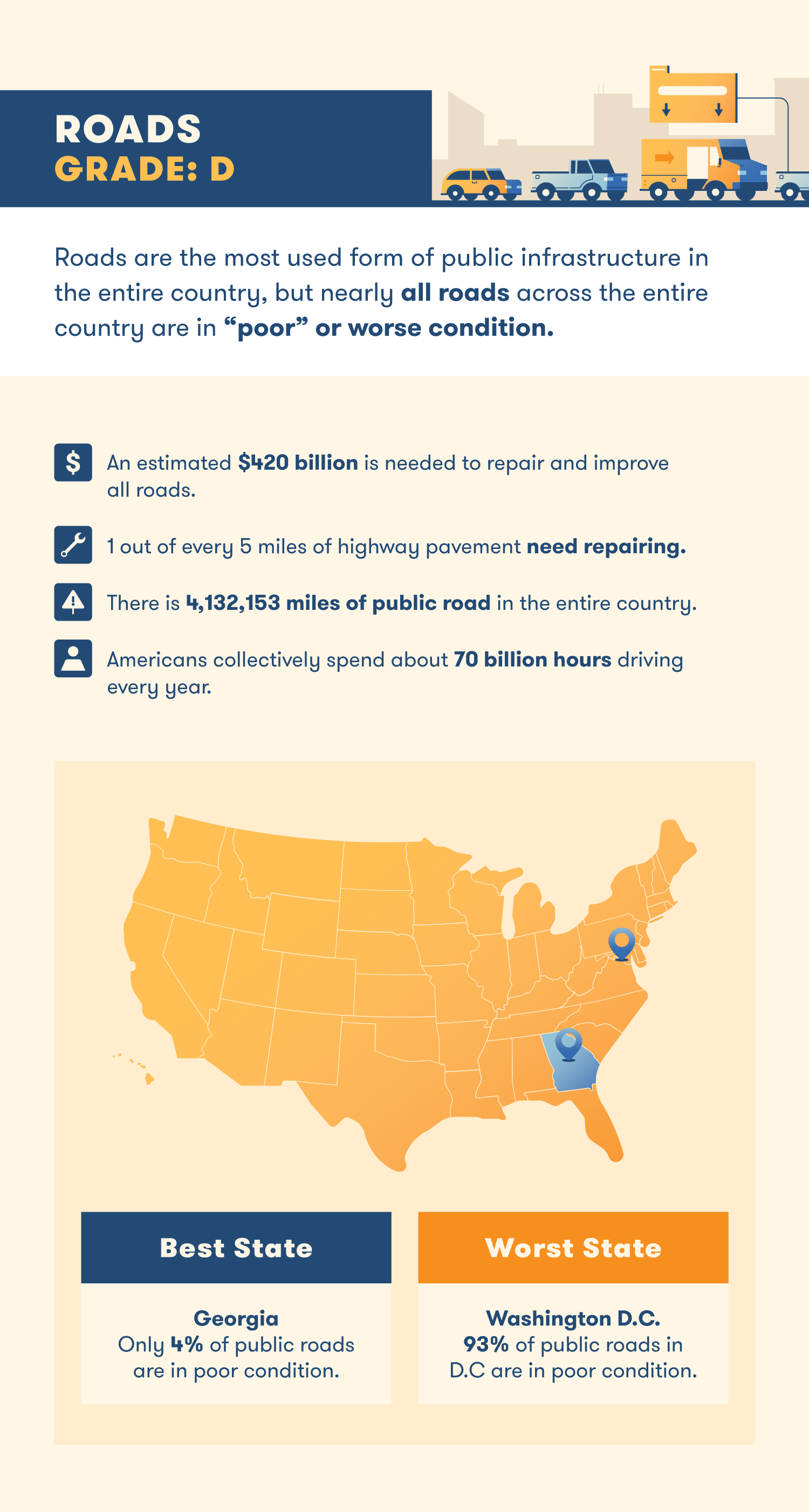 Drinking water infrastructure has always been one of the most important construction aspects of a new city, but unfortunately, it’s in dire need of upgrading and replacement. An aging infrastructure (with some pipes being over 100 years old), harmful contaminants like lead and toxic algae being released into the water supply, and other dangers such as climate change pose a great risk to the public drinking water and the overall health of the country.

Hawaii takes its drinking water seriously, and as such has some of the best public tap water across the country. Conversely, Alaska has bad contaminants in its drinking water supply that can put Alaskans at risk. Flint, Michigan has perhaps the most well-known case of contaminated water, and although the crisis began in 2014, it still continues to this day, with some fearing it’s just the tip of the iceberg that is inadequate infrastructure. 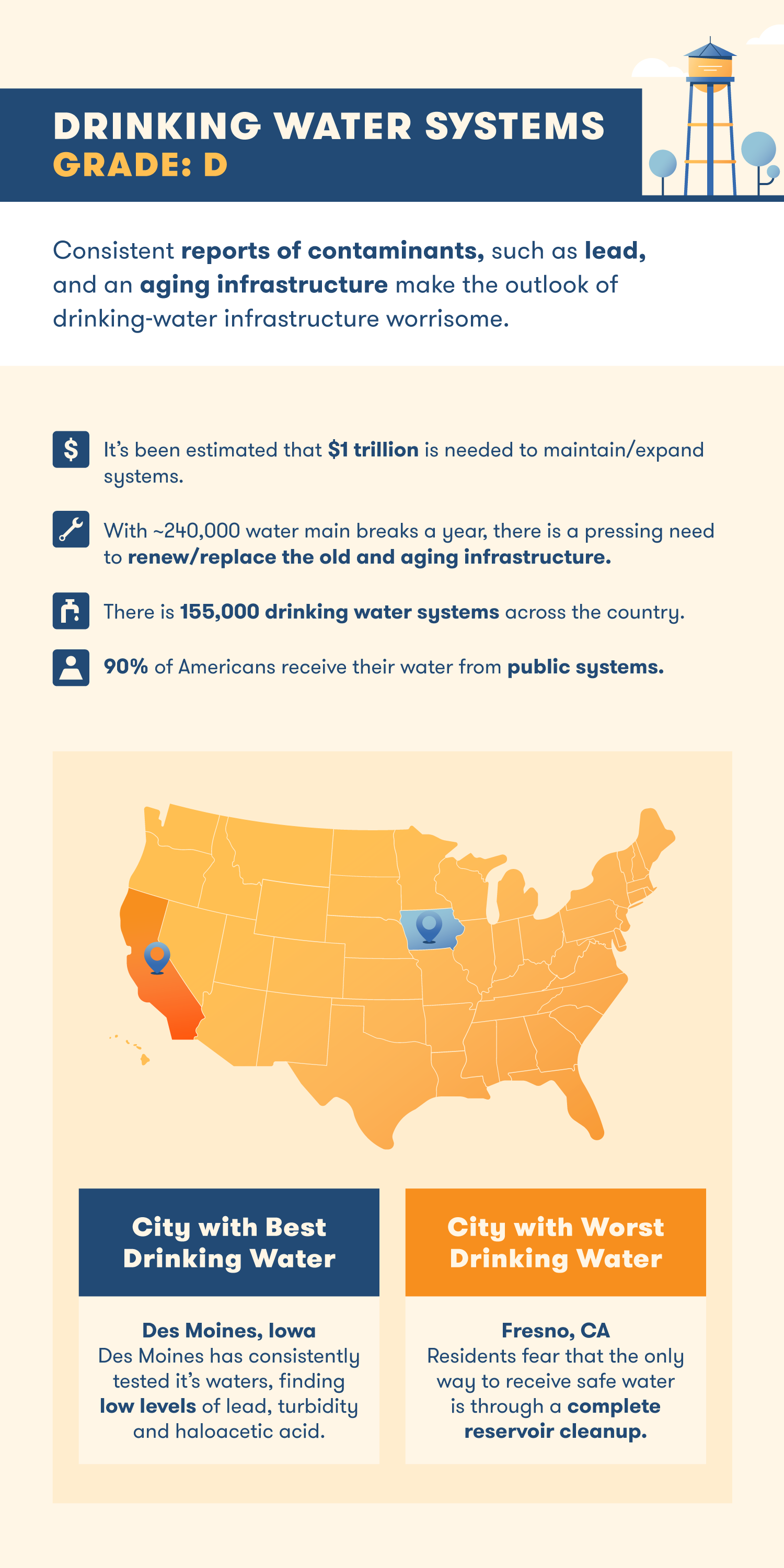 How We Can Improve and What We’re Doing Now

Politicians and government officials across the political spectrum have generally agreed that America’s infrastructure needs fixing. The deterioration of the country’s infrastructure puts it at risk of lagging behind the global market, so improving it should be a priority not just for citizens and community groups, but for businesses and corporations as well.

Although the country as a whole needs to improve its infrastructure, local and state governments have been tackling the problem areas where they can. According to U.S. News, Oregon is considered to have the best infrastructure in the country due to its commitment to improving the quality of life for its citizens. West Virginia, on the other hand, has the worst infrastructure thanks to dangerous roads and bridges that have deteriorated over the years.

A dedicated investment in infrastructure is in the public’s best interest. We can all do our own part by keeping up to date with what’s going on in the country and how things like the energy, transportation and utility sectors are being affected. Through this combination, we can provide more jobs, increase safety and improve the overall quality of life of the citizens in the country.

Generator Amperage Chart: kVA and kW to Amps Conversion
Pigskin Palaces: The 5 Most Expensive Football Stadiums
Plaster vs. Drywall: Dissecting the Differences
26 Heavy Construction Equipment Names
What is a Boom Lift?
How Are Skyscrapers Built
The State of Mental Health in the Construction Industry
Mass Timber: Is Wood the Future of Sustainable Construction?
The Science of Demolishing a Building
The 4 Different Types of Construction Contracts