Floating Cities: Your Guide to the Future of Urban Construction A floating marine utopia might sound like a science fiction fantasy, but these innovative projects could soon be taking shape in our world.

The concept of a floating city isn’t new. Humans have a long history of living in communities on the water, from the chinampas of the Aztec Empire to the canal city of Amsterdam. But more recently, modern environmental and social developments like the threat of climate change and the introduction of new technology have renewed global interest in the idea of sustainable urban, ocean-based communities.

In April 2019, the United Nations Human Settlement Programme (UN-Habitat) discussed the possibility of using floating cities to help prepare for and alleviate infrastructural damage related to climate change. Alongside the Oceanix company, the partnership unveiled a plan for a 10,000-resident floating city intended to house people whose existing communities are most susceptible to the threat of rising seas. The proposed city would not only be built on water but would also have a symbiotic relationship with it, designed from scratch to be climate-neutral and completely sustainable.

So what do you need to know about floating cities? Read on to find out what they are, how they’re structured, and their environmental benefits. Or you can skip to our infographic below to see a visual summary of everything you need to know.

What are Floating Cities?

The modern concept of a sustainable, climate-resistant floating city has origins in the seasteading movement, a vision headed by the Seasteading Institute that seeks to create self-governing nation-states on water. Seasteaders’ hope is to create a human-made ecosystem of communities that are designed to grow, adapt, and transform over time.

Some of the principles that anchor floating city proposals are: 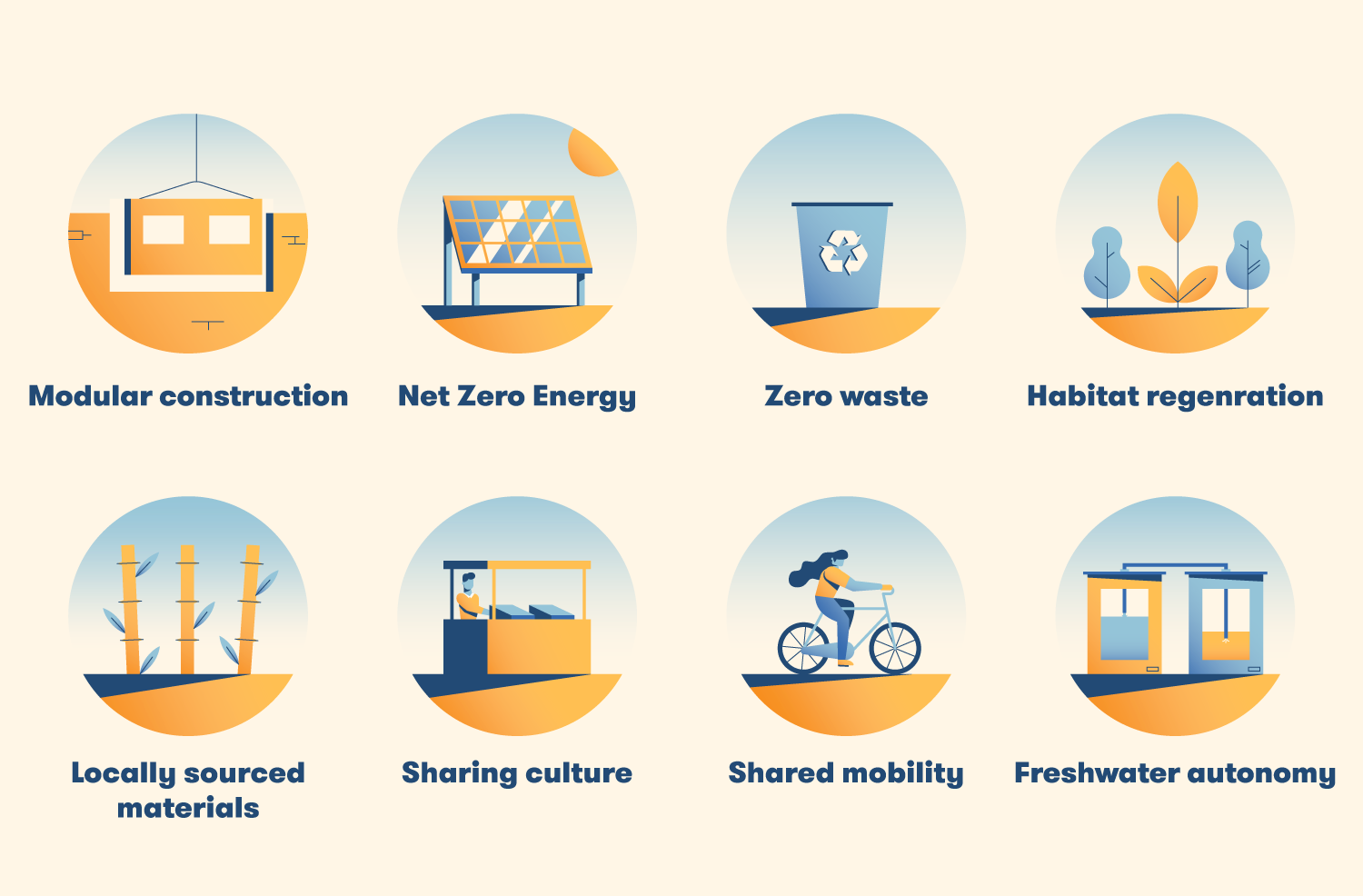 While there have been several different renderings of floating cities over the years, the plans proposed by Oceanix at the UN roundtable provide a glimpse of how the most modern iteration of a floating city would be built.

The city would consist of a collection of connected platforms with varying designs, each of which would serve a role in sustaining the floating metro. One platform would house submerged gardens for growing seafood while another would hold desalination equipment for making salt water drinkable. Inner platforms would house communal facilities for programs like education, culture, exercise, and healthcare.

Similar to modular construction seen on land, the infrastructure of these floating cities would be able to be disassembled and reconfigured by architects for continued development. All buildings in the city would also be constructed at a low height to minimize damage from climate events.

To keep settlements afloat, architects would use large pontoon structures filled with air to provide buoyancy to the platforms. These platforms would be hexagonal, as it’s considered the most space-efficient architectural shape. The city would not be floating freely, but would instead be moored to the seafloor and anchored off the coast of a major city on the mainland.

Ideally, these floating cities would eventually make up a circular network of communities sustainably harnessing natural resources to provide energy, food, water, and other materials. These resources include: 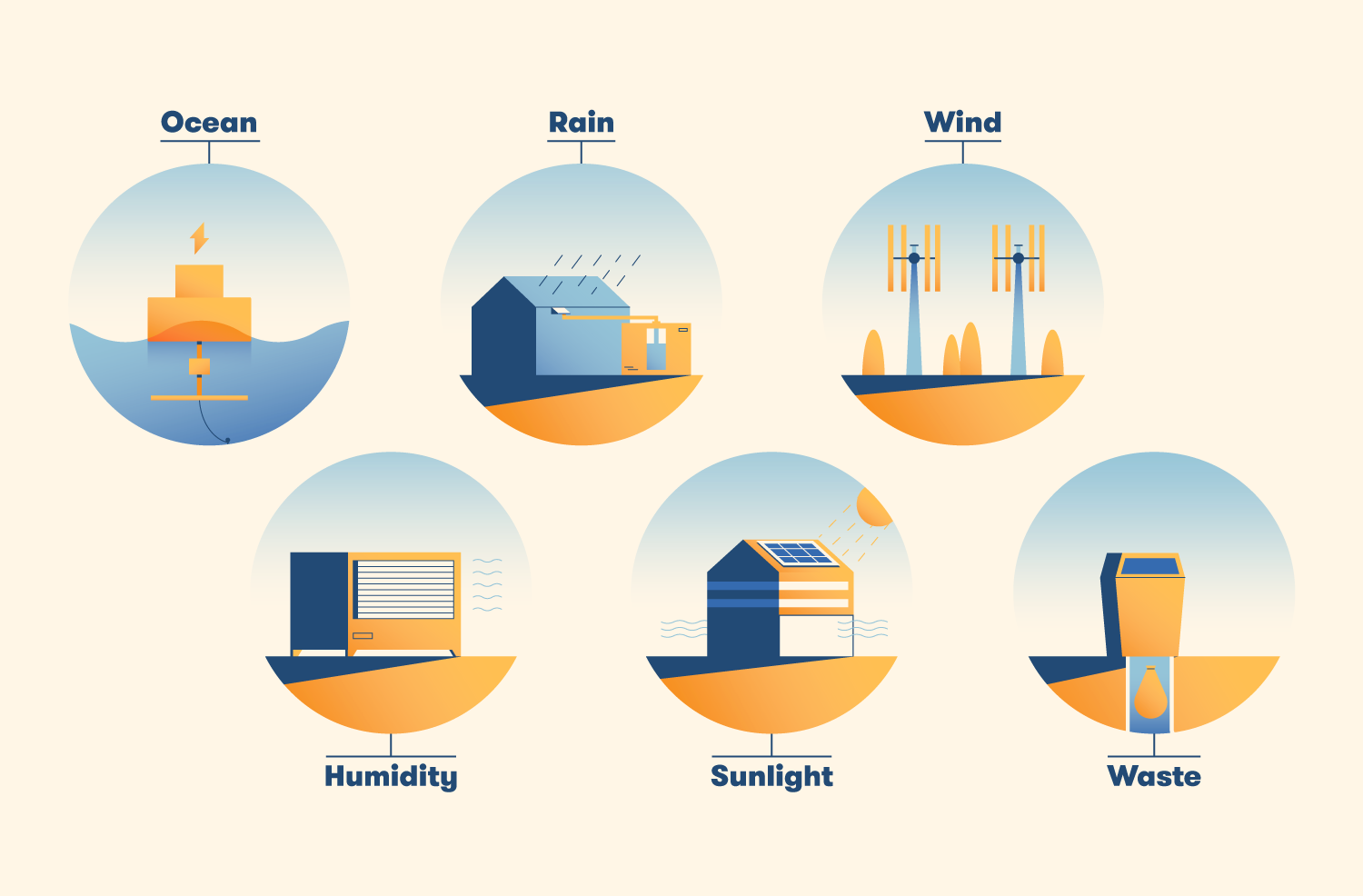 These floating cities would be built from scratch to be climate neutral and self-reliant, which provides a number of key environmental benefits.

Because they would be built on the water, floating city structures would maintain a lower center of gravity, protecting them from strong waves, floods, tsunamis, and even hurricanes. The use of locally-sourced innovative building materials would allow the structures to self-repair over time and withstand natural harsh weather conditions. 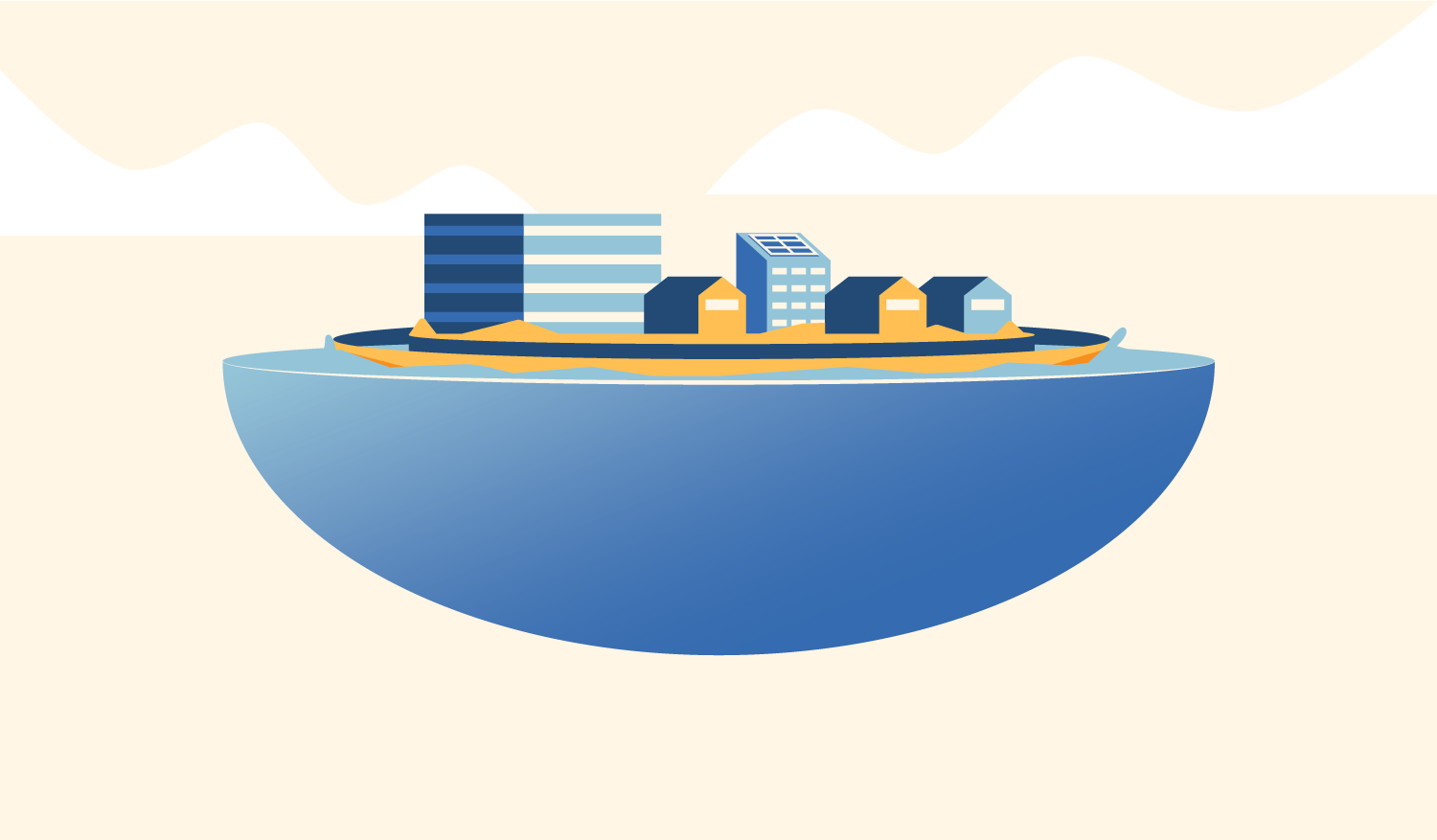 Climate change threatens the future of many communities. Ninety percent of the world’s largest cities are situated near a body of water. To make matters worse, sea levels are expected to rise by at least 26 inches by the end of the century. Due to their buoyant design, floating cities would provide safe, climate-resilient housing for flood-stricken communities.

Additionally, the positioning of the platforms in a floating city could cast shadows on the surface of the water, helping to lower ocean temperatures that have risen as a result of climate change. 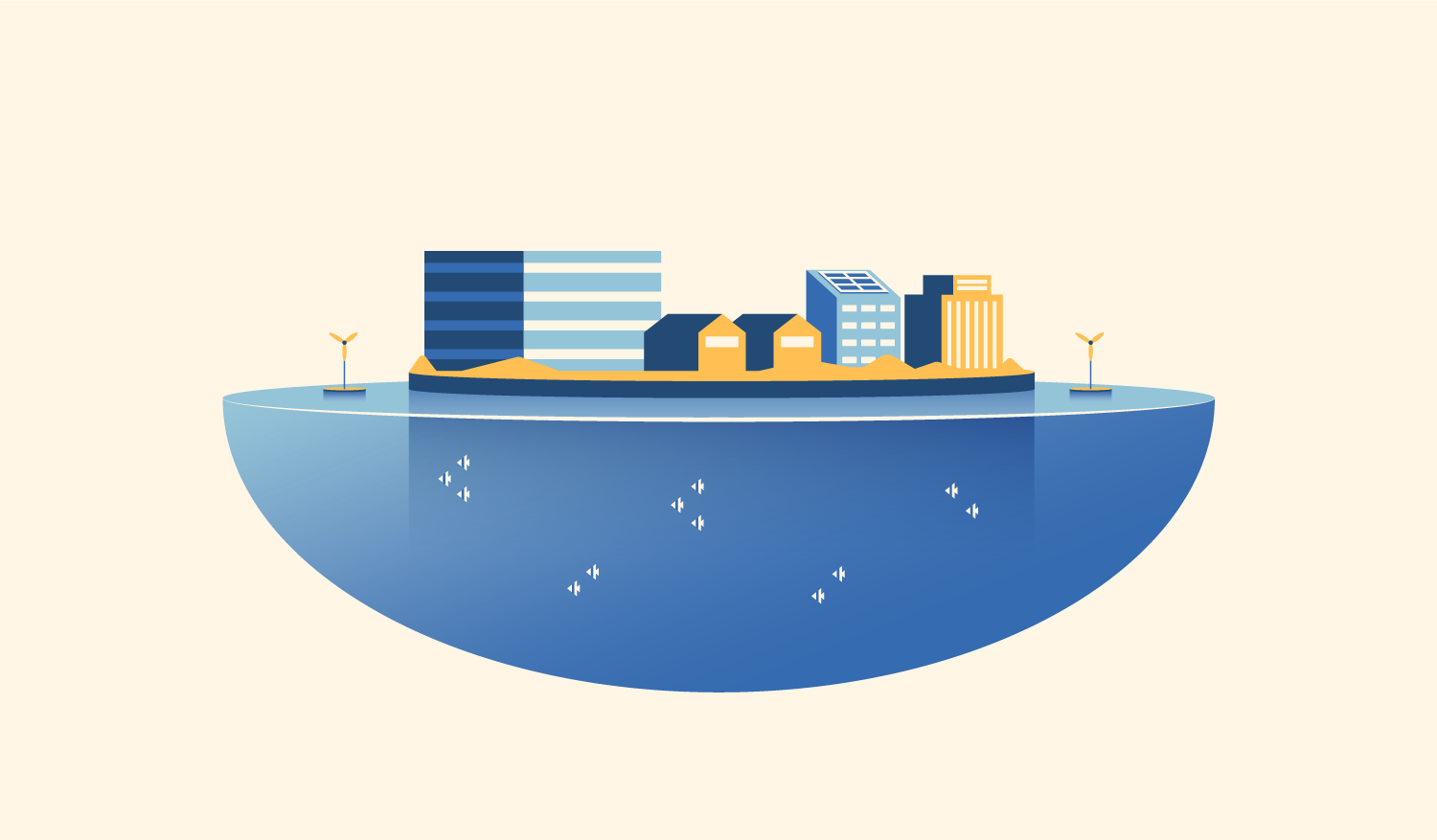 As cities become more crowded, housing will also become increasingly difficult to afford. Floating cities would provide a respite from the housing crunch, particularly in cities with local governments that are willing to invest in offshore housing. Prefabrication paired with the low cost of leasing space on the ocean would create an affordable model of living. 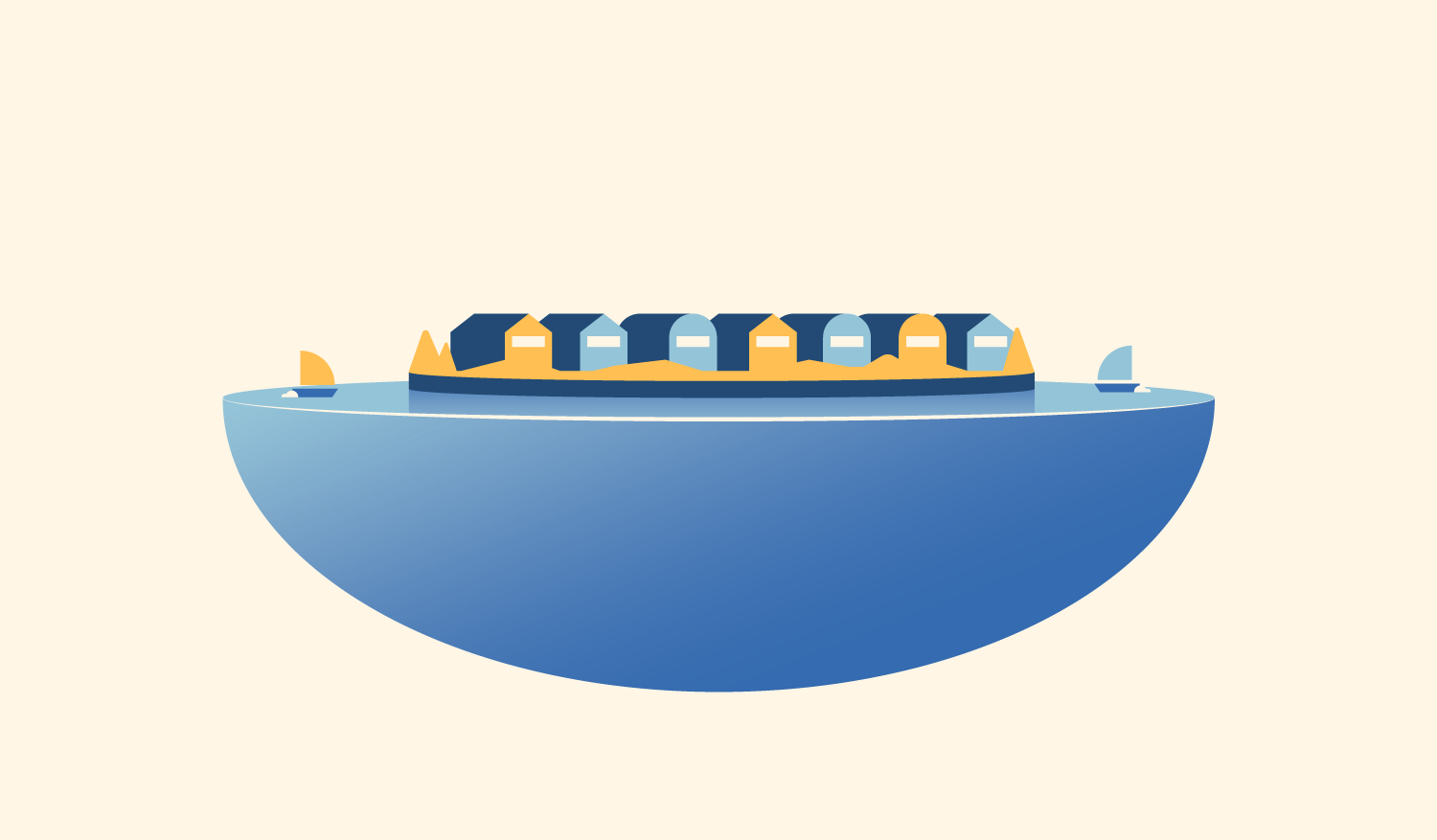 Floating cities would use resources from local solar energy, recirculating water, and food production to be fully self-reliant. The open ocean would provide an abundant, untapped source of both water and solar energy, which could be harnessed for use with new technologies like high-tech aquifers and purifiers.

Floating communities would also be able to generate their own produce and food from on-land farms and underwater gardens. This would allow these communities to reduce waste and transport by producing the food necessary to feed their inhabitants. 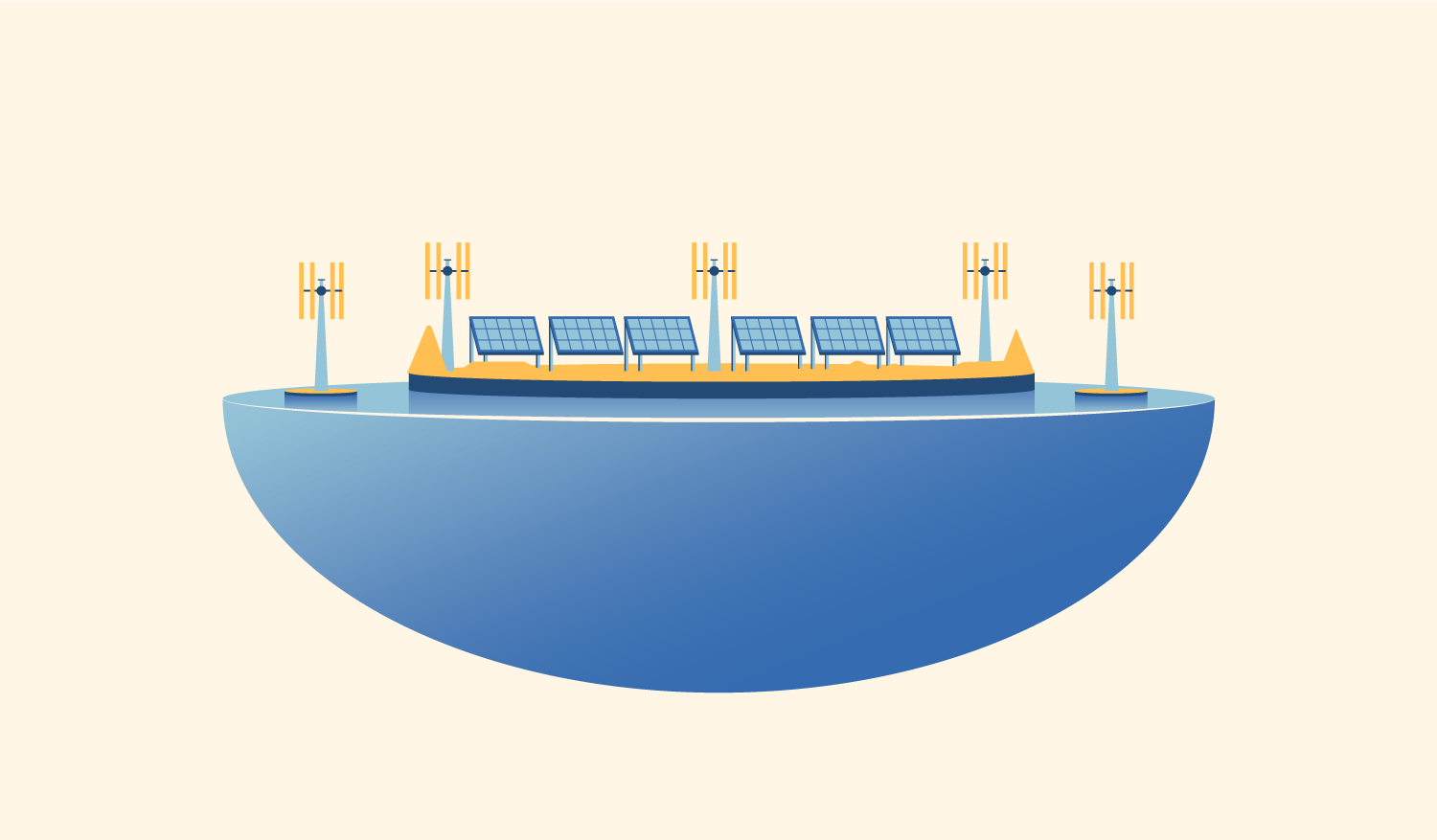 Finally, floating buildings would play a key role in reducing CO2 emissions in the built environment. The Oceanix city concept includes restrictions banning high carbon-emitting cars or trucks — even garbage trucks. Instead, pneumatic trash tubes would be used to transport trash to a sorting facility, where they would be recycled or repurposed.

The close-knit design of these floating settlements would make it possible to use driverless vehicles and drones to make deliveries, as well as a shared route for passenger travel using only sustainable modes of transportation. 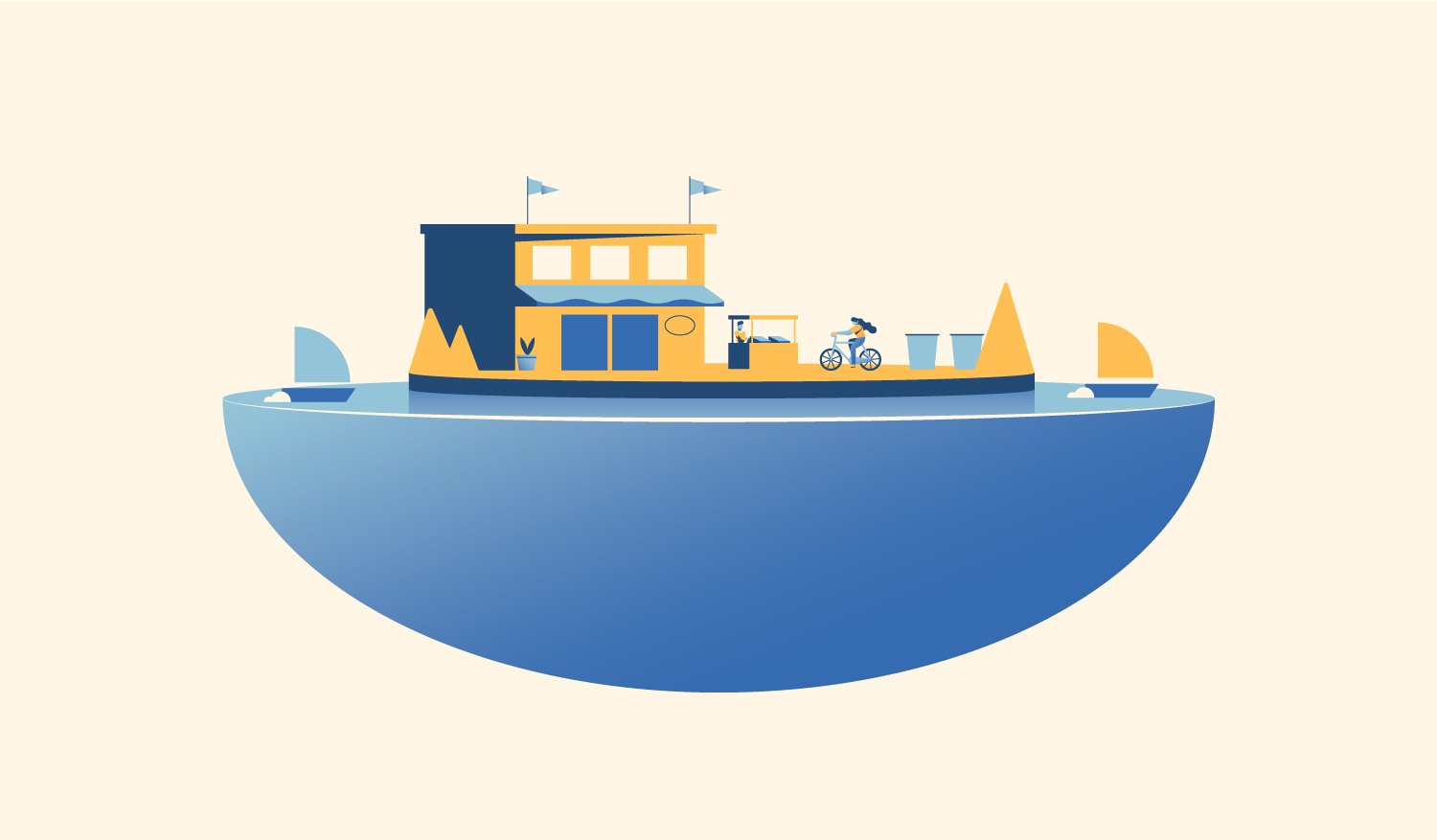 The Challenges to Building Floating Cities

Although it sounds incredibly promising, floating city technology is still in its infancy. Even Peter Thiel, a prominent seasteading advocate, mentioned in a 2017 interview that the technology is “still very far in the future.”

One significant obstacle would be construction costs. The most recent assessment of the project, which occurred in 2013, concluded that a small floating city for up to 300 residents could cost as much as $167 million. A larger city that houses more residents would likely be prohibitively expensive.

Another logistical concern is the question of political authority. Current plans propose that floating cities would serve as separate boroughs or extensions of major mainland cities. However, it’s unclear exactly how the floating cities would be governed. There is also concern that, though floating cities are meant to be an affordable housing option for climate refugees, rising demand may result in these climate-resilient oases becoming exclusive and expensive, serving only to provide power and resources to the elites.

Although there are still many obstacles on the path to making floating cities a reality, the project seeks to challenge and, hopefully, ultimately solve many of our climate and housing dilemmas. Now embraced by UN-Habitat and supported by new innovations, the concept is closer within reach than ever before. Only time will tell whether floating cities will turn out to be the path society chooses toward a more climate-friendly future, but for now, they continue to offer a vision of an urban future that is peaceful, prosperous, and sustainable.

To learn more about floating cities, see our infographic below.

4 Types of Steel: What Makes Them Different?
What Are "As Built" Drawings in Construction?
The Complete Commercial Building Renovation Checklist
Types of Bridges
How To Construct and Prepare Buildings in Wildfire Zones
The Psychology Behind Building and City Design
How Do Landfills Work? (Animated Guide)
How to Dispose of Concrete Properly
Pre-Construction Meeting Agenda, Checklist, and Questions
Constructing the City of the Future