7 Types of Excavators and Their Uses on the Construction Site 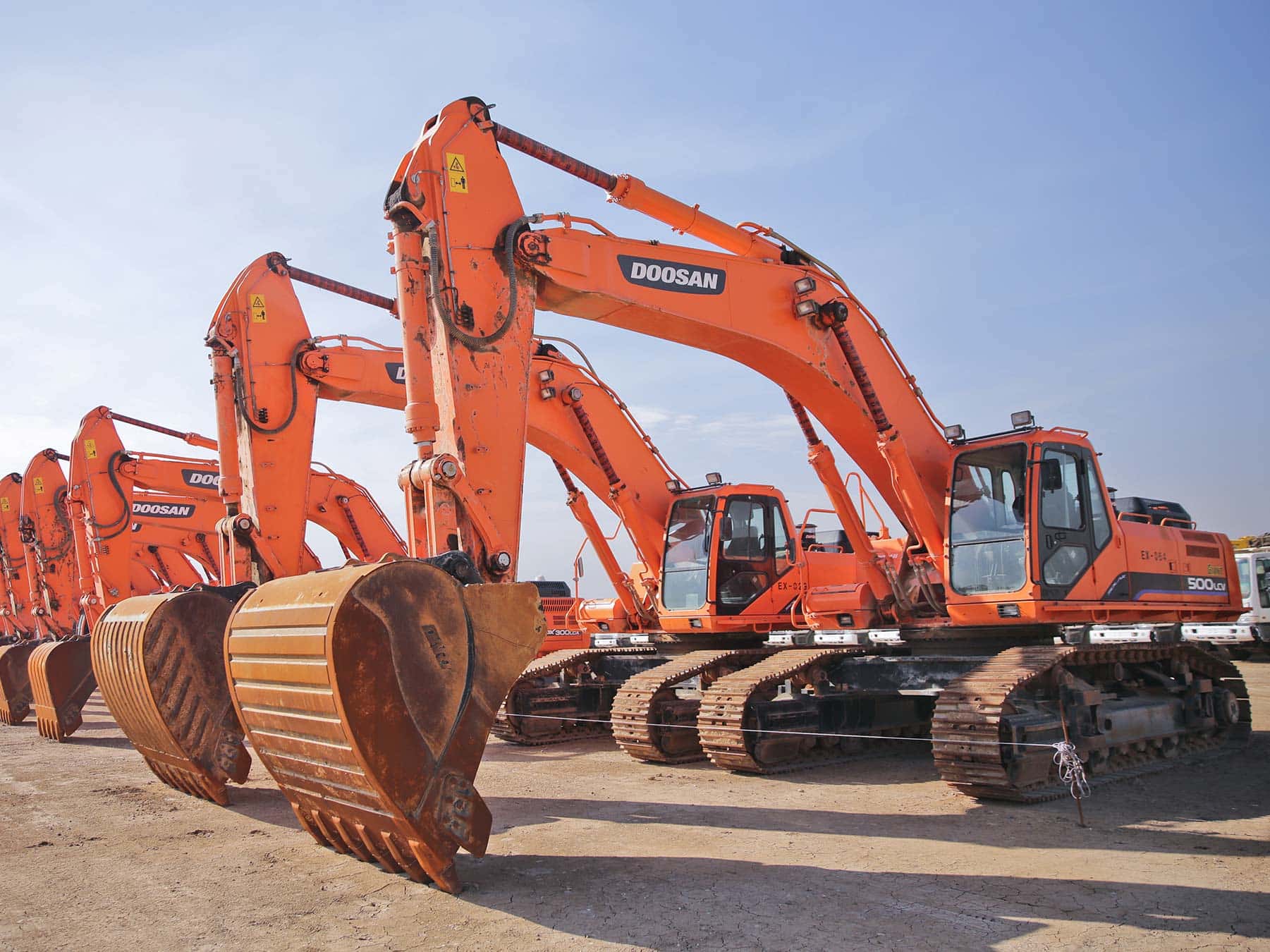 An excavator is a must on your job site when you need to lift heavy amounts of soil. Excavators are popular earthmoving vehicles that feature a bucket, arm, rotating cab and movable tracks. These components provide superior digging power and mobility, allowing this heavy equipment to perform a variety of functions, from digging trenches and breaking holes to lifting away waste and excavating mines.

What are excavators used for? Excavators are applied to a variety of contractor and industrial needs, including mining, road construction, building construction and demolitions.

There are many types of excavators — smaller machines handle digging and drilling functions, while larger excavators have different tools for heavy-duty projects. When renting your excavator, you’ll want to consider its size and speed as well as working conditions on the job site, such as the amount of space and the soil types.

The most common excavator types are crawler, dragline, suction, skid steer and long reach excavators. We’ll go over each type of excavator and the work each one is best used for.

Unlike other large excavators that run on wheels, crawlers run on two large endless tracks and are optimal for mining and heavy-duty construction jobs. Also known as compact excavators, these excavators use hydraulic power mechanisms to lift heavy debris and soil.

Their chain wheel system allows them to slide down and scale hills with less risk, making them suitable for grading hilly areas and landscaping uneven terrain. While slower than other excavators, crawlers provide greater balance, flexibility and stability overall.

Cons: Slower than some other excavators

Wheeled excavators are similar in size and appearance to crawlers but run on wheels instead of tracks. Replacing tracks with wheels makes them faster and easier to maneuver on concrete, asphalt and other flat surfaces while still offering the same power capabilities.

Because wheels offer less stability on uneven ground than tracks, wheeled excavators are commonly used for roadwork and urban projects. However, operators can add outriggers to increase stability when transitioning between asphalt or concrete and an uneven surface.

Pros: Fast and easy to maneuver on flat surfaces

The dragline excavator is a larger excavator that operates with a different process. The equipment utilizes a hoist rope system that attaches to a bucket via a hoist coupler. The other side of the bucket affixes to a dragline that runs from the bucket to the cab. The hoist rope raises and lowers the bucket while the dragline pulls the bucket toward the driver.

Due to their weight, draglines are often assembled on-site. The unique system of this type of excavator is commonly used in large-scale civil engineering projects like canal dreading.

Cons: Weight and size make it impractical for smaller jobs

Also known as vacuum excavators, suction excavators feature a suction pipe capable of providing up to 400 horsepower. The excavator first releases a water jet to loosen the ground.

The pipe, which contains sharp teeth at the edge, then creates a vacuum that carries away soil and debris up to 200 miles per hour.

A suction excavator is ideal for delicate underground applications, as it can reduce the chance of damage by more than 50 percent.

Unlike standard excavators, skid steers have booms and buckets that face away from the driver. This orientation allows the attachments to reach over the cab instead of around it, making these excavators useful in more narrow areas and maneuvering tricky turns.

They are often used for digging pools, site cleaning, residential work and debris removal, where space is more limited and objects are spread far apart.

Pros: Easy to maneuver in tight and narrow spaces

Cons: Don’t perform as well on uneven or slippery surfaces

As its name suggests, a long reach excavator features lengthier arm and boom sections. The design allows for better operation in hard-to-reach locations. The excavator’s extendable arm can reach over 100 feet horizontally.

These excavators are best used for demolition projects like structural crumpling and breaking down walls over bodies of water. Different attachments can be affixed to the arm to perform additional jobs such as shearing, crushing and cutting.

Cons: Difficult to use in tight spaces

Pros: Easily fits into tight spaces and can be used indoors

Cons: Can only handle smaller loads

An excavator’s design allows it to serve many versatile purposes. Hydraulic cylinders, booms, arms and attachments provide digging and holding functionalities, while a house-like cab provides the driver with controls to direct the excavator. A rotating platform and wheels provide the necessary mobility to lift and remove debris from the worksite.

Excavators use a variety of hydraulic attachments that serve different purposes. In addition to a bucket, other common attachments include an auger, breaker, clamp and quick coupler.

Attaching an auger allows you to bore into the ground. Powered by hydraulic circuits, these helical attachments can reach over objects and drill deep holes. Augers come in different specifications and sizes for various digging conditions and terrains — they range from 4 inches to 50 inches in length and can dig up to 32 feet.

Breakers are similar to jackhammers but are much larger in size. With the ability to provide up to 1,000 pounds of impact energy, these attachments can break into tougher surfaces like stone and concrete.

Clamps allow excavator operators to pick up large materials that are too oversized for a bucket, such as tree stumps and concrete. The attachments can be used with buckets or as pieces in a grapple. Clamps are easy to attach and detach from excavators.

Couplers allow you to quickly switch between tools and attachments without a crew. Their versatility is handy when moving between different tasks and processes on a job site.

Differences Between an Excavator and a Digger Backhoes, also known as diggers, are a common fixture on construction sites but are often confused with excavators. While they share similar digging and lifting capabilities, backhoes and excavators differ in size, weight and functionality.

Excavators are generally large equipment weighing up to 200,000 pounds. Their bucket and boom design allow them to rotate a full 360 degrees.

A backhoe, on the other hand, is generally much smaller and shares more similarities in appearance with a tractor. The design means a backhoe can only rotate 200 degrees from side to side. Its front and back buckets can excavate materials, load waste and drag debris toward the vehicle. Renting a backhoe is best for light or medium-duty jobs with versatile applications.

While there are many different types of excavators, their core functionalities are similar. The lifting and digging abilities make them a staple on just about any construction site. Their high cost makes renting the most cost-effective option for most companies.

Contractor vs. Subcontractor: What Are The Key Differences?
5 Biggest Bulldozers in the World & Their Specs
Forklift Accident Types, Stats, and Safety Protocols
What Is Commercial Construction?
12 Forklift Attachments and Their Uses
How to Become An Early Riser: 25 Science-Backed Tips
26 Heavy Construction Equipment Names
Backhoe Sizes: Find the Right Fit for Your Project
How To Construct and Prepare Buildings in Wildfire Zones
Backhoe vs. Excavator: Which Machine Is Best for Your Project?