What is a Crane Boom? 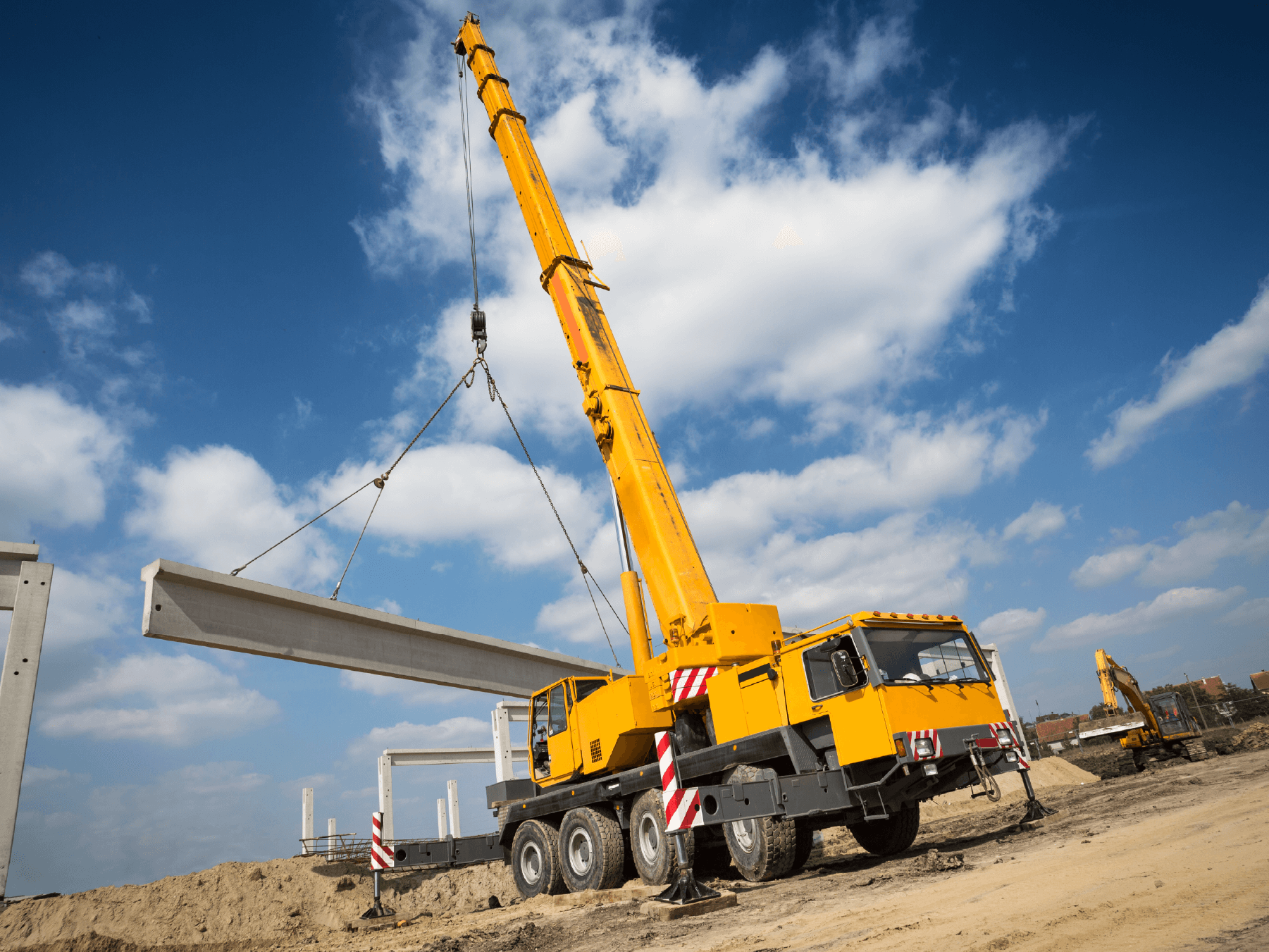 When you see a crane on a construction site, the first thing you probably notice is the long arm stretching into the sky. This part of the crane is called the boom, and it is one of the machine’s most noticeable and important features.

A crane boom is a long fixed or hydraulic arm that is used to move large objects in construction. It bears most of the weight when positioning a load, and its length determines a crane’s maximum reach. Crane booms take on a variety of roles and appearances depending on the type of crane. 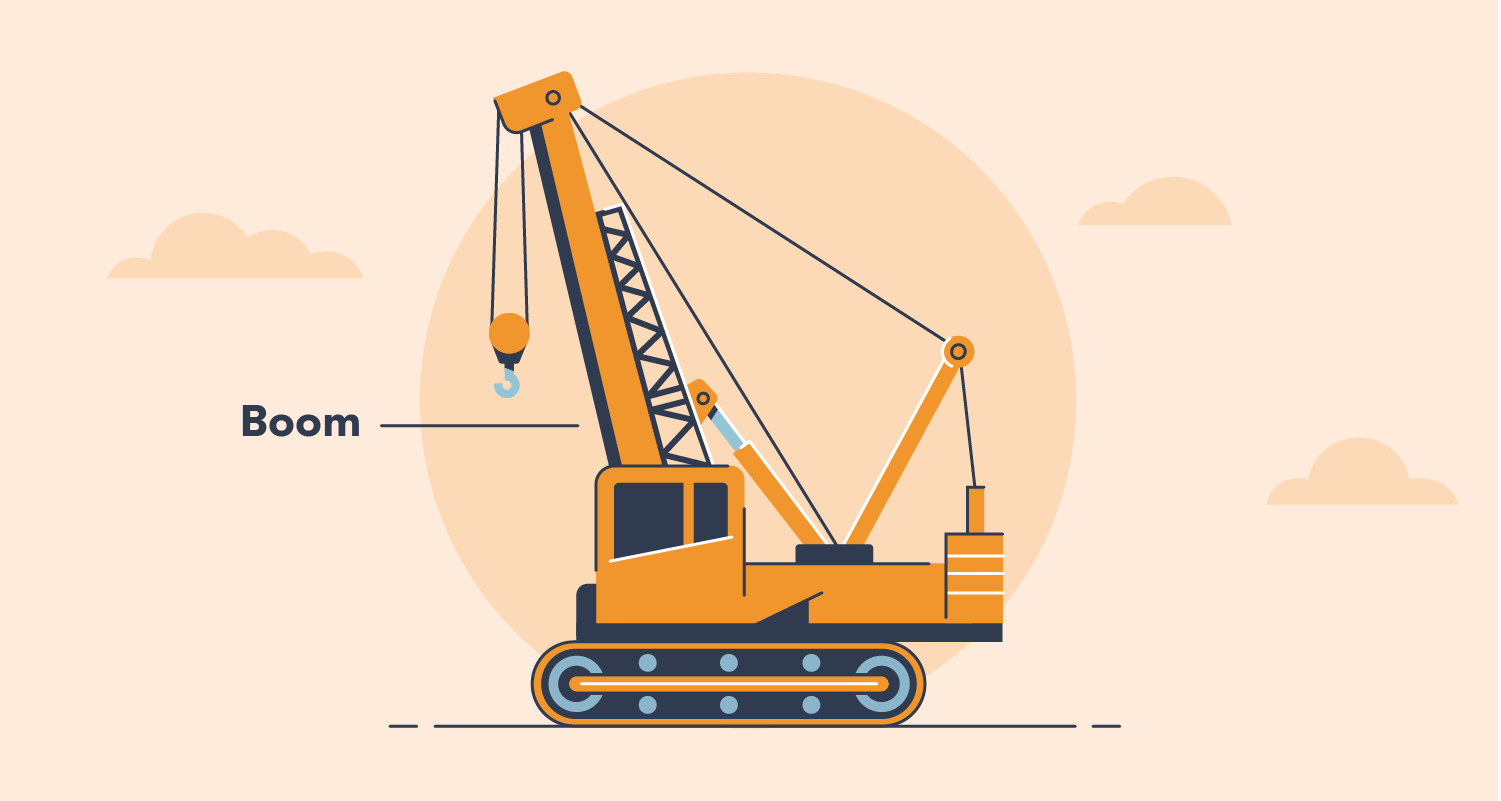 A crane boom may look like a simple device, but it requires a high level of precision to operate. Read on to learn how a crane boom works and interacts with other important crane components.

How Does a Crane Boom Work?

There are two different types of crane booms: lattice booms and hydraulic booms. While they both serve the same purpose of lifting and moving objects and materials, they work in different ways.

Lattice booms are made up of multiple steel bars welded together in a “W” or “V” pattern. This lattice-shaped design increases the boom’s strength and minimizes its weight, making it ideal for tower and crawler cranes.

Lattice booms remain at a fixed length, but they can swivel, tilt and move side to side when moving a load. Because the largest cranes often contain lattice booms, engineers must carefully calculate the angle of tilt required to lift heavy loads while keeping the crane stable. The operator’s cab is equipped with a series of buttons, joysticks and a computer safety system to control the boom’s movements. Once the boom is in the correct position, the operator uses the hoist system running along the boom to raise and lower the load. 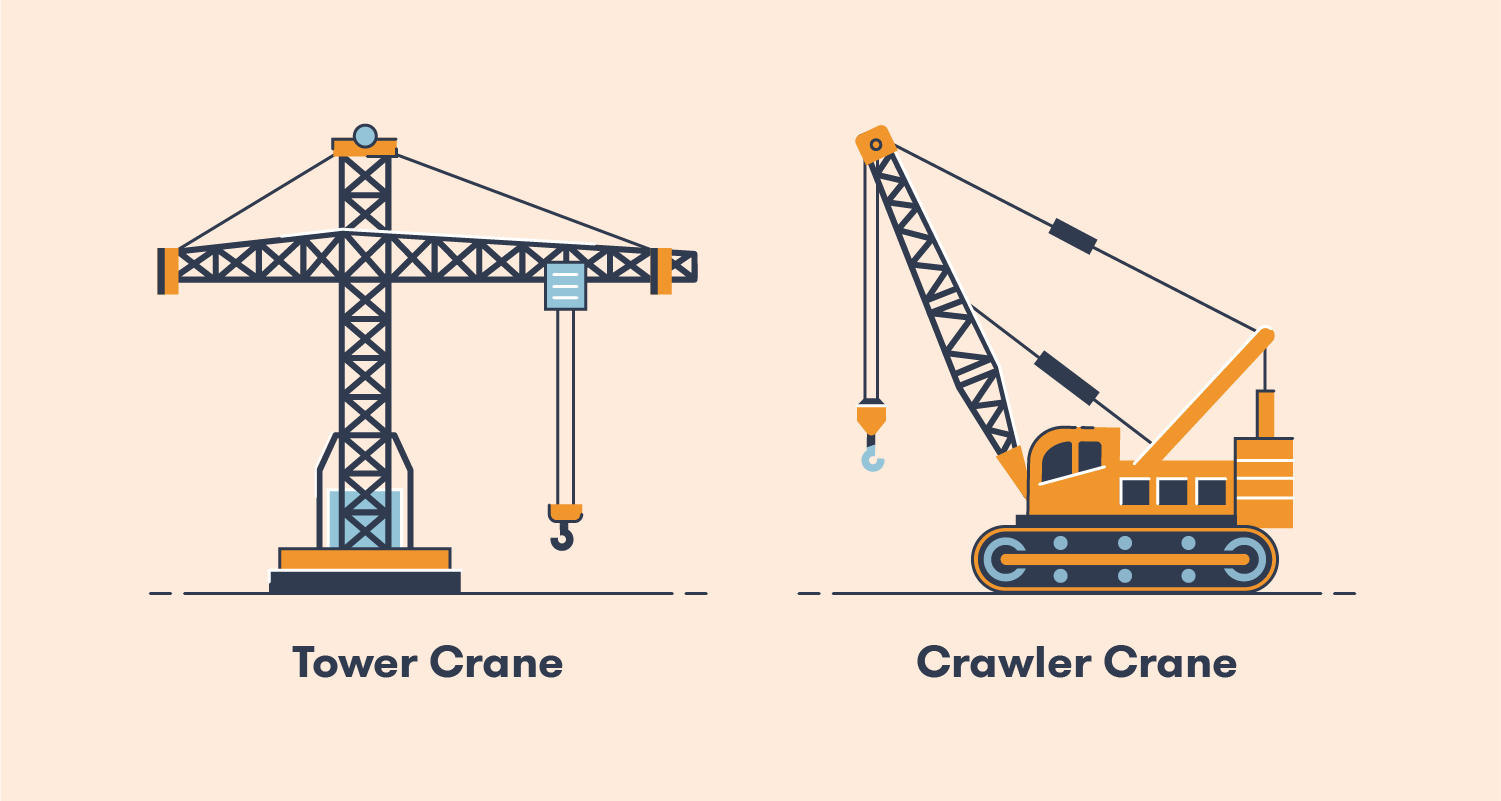 Unlike lattice booms, hydraulic crane booms can extend to different lengths and retract for transport. They often have a telescopic or pole-like appearance and operate using a powerful hydraulic system.

This system works by pumping hydraulic fluid into cylinders containing pistons. A pump generates pressure that pushes the pistons in and out, allowing the sections of the crane boom to extend or retract. Hydraulic systems are most commonly used for telescopic crane booms, but they can be used for folding crane booms as well.

Folding crane booms fold, rather than extend like a telescope, making them ideal for compact construction sites that require ultra-precise movements. They use the same hydraulic system as telescopic booms but require more hydraulic cylinders to operate since they contain more articulation points. 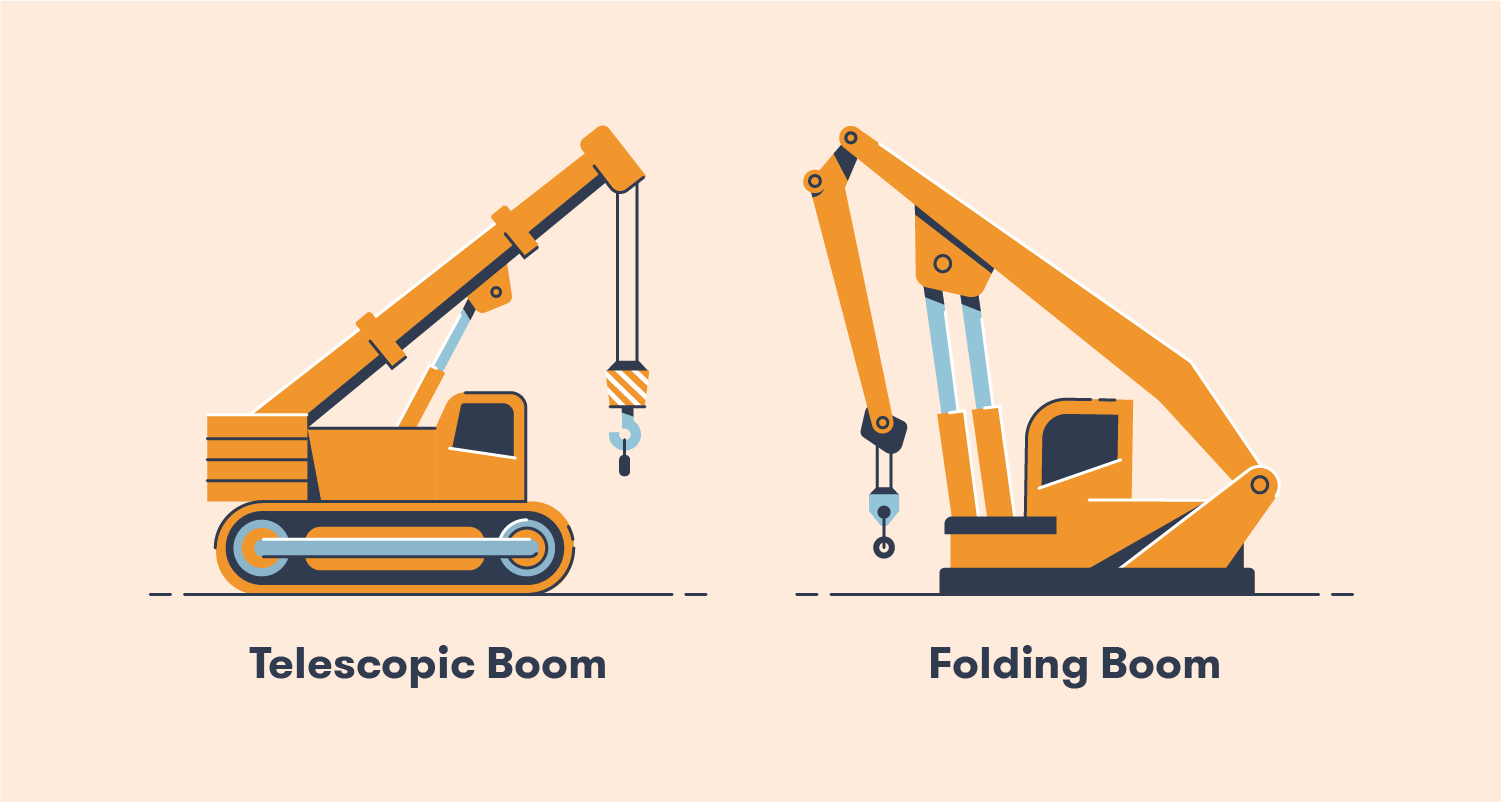 Because of their similar features, cranes and boom trucks are easily confused with one another. Both are used to lift heavy materials on construction sites, and booms are common features on both machines. However, some key differences set them apart from one another.

Cranes can be either fixed or mobile and come in a variety of sizes and styles. They are designed to lift heavy materials, and they use a system of stabilizers and counterweights to do so. Some of the most common types include tower, all-terrain, hydraulic, fixed and truck-mounted cranes.

Boom trucks are typically smaller than cranes and are designed to lift lighter loads. They drive like regular trucks, making them faster and easier to maneuver on job sites. Unlike cranes, they do not require counterweights or outriggers to keep them stable and only use hydraulic booms. In addition, some boom trucks use a loading basket to lift maintenance workers to otherwise inaccessible places. 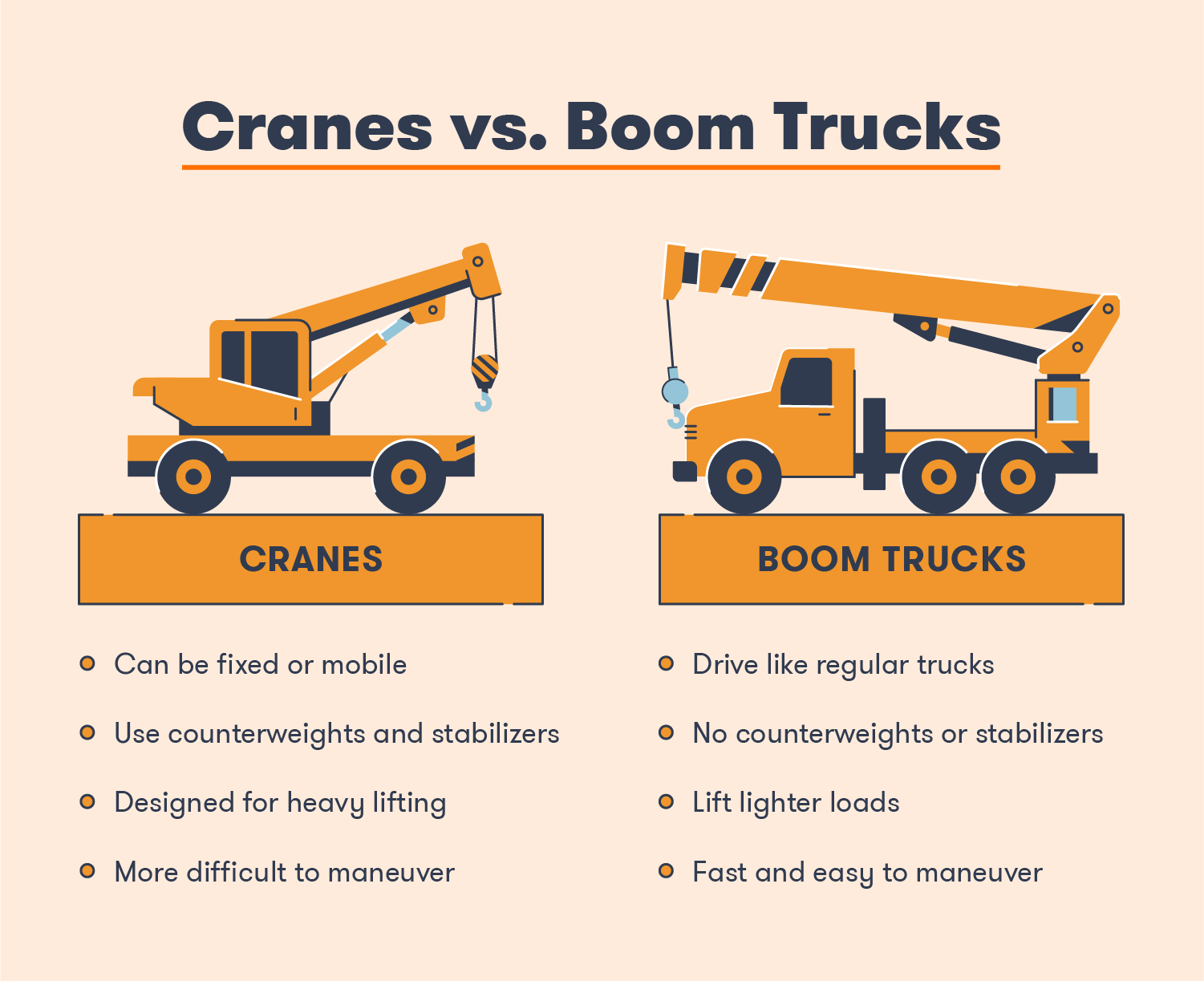 Cranes have multiple parts that work together to safely lift and transport heavy loads. Some of the main components that interact with the crane boom include:

Jibs are sometimes confused with crane booms because of their similar appearance. On lattice cranes, the jib often extends from the boom to put extra distance between the load and the crane’s main support system. Jibs are common features on tower cranes, and they can be detached as needed for different types of jobs.

Because cranes lift such heavy loads, they require counterweights and outriggers to offset the load weight and prevent them from tipping over. Counterweights are typically mounted on the back of the crane behind the boom, and they are both stackable and removable to accommodate different-sized loads.

Outriggers are heavy beams used on mobile cranes to increase stability when the crane is in use. When deployed, they extend from the chassis and use a flat pad to evenly distribute the crane’s load. Outriggers use a hydraulic system to extend and retract, and they require a flat surface to function properly.

The metal cables cranes use to lift and support heavy loads are called wire ropes. Wire rope is made from multiple steel wires twisted into a helix around a core and is designed to hold up against extreme stress without breaking. Wire rope runs along the boom and is the main component of a crane hoist, the system responsible for lifting and lowering loads.

A load block is a device that hangs from the end of a crane’s cables and attaches to the load. It is typically made of steel and contains a hook, bearing, swivel and set of sheaves heavy enough to keep tension on the wire rope when not attached to a load.

A crane’s upper carriage houses multiple crane components, including the engine, cab and wire rope drum. The boom attaches to the upper carriage via a set of boom anchors, and the operator manipulates the crane’s controls from this vantage point.

Crane booms are one of the most well-known parts of a crane — and for good reason. They are versatile machines that come in a variety of shapes, sizes and styles. Crane booms are essential for lifting the heaviest loads in construction, and the world’s tallest buildings would not exist without them.

11 Crane Safety Tips to Prevent Accidents
Concrete Scarifier vs. Grinder: How To Choose
The 10 Trenching Safety Tips That Can Save a Life
What Is Included in a Subcontractor Agreement? [+ Template]
25 Must-Read Construction Books for 2022
Generator Maintenance Checklist
Three Points of Contact: How to Prevent Falls
How Do Construction Cranes Work?
Backhoe vs. Excavator: Which Machine Is Best for Your Project?
10 Common Forklift Types, Classifications and Uses
Cranes Equipment Share this article: