Cranes have a long history of being a staple in construction that reaches back thousands of years. Records indicate the ancient Greeks invented the first cranes and used them as early as 515 BC. Some reports indicate cranes were used for water irrigation in ancient Mesopotamia, thousands of years earlier. In fact, many ancient structures, if built today, would need to use some sort of crane.

It was during the Industrial Revolution that cranes became integral to the modernization of the world, replacing the manual pulley system with an engine and an operator that preceded them. Today, different types of cranes can be found on almost any construction project, each one specializing in its own specific task.

There is a downside to this variety, however: because there are so many cranes available, it can be challenging to know which one does what. Due to the specificity, each crane provides, getting the wrong type can cause delays and budget issues. Understanding the differences between each crane can help you figure out which one to use on your project, so you can rent the right crane at the right price.

To help you choose the right machine, we’ve broken down the different types of cranes (mobile and fixed) and their uses below.

Mobile cranes are mounted on crawlers or tires and offer greater mobility than standard cranes. Some mobile cranes are even able to be driven on the highway. Their ability to navigate around job sites and carry large amounts of weight makes mobile cranes a very popular addition to many projects.

There are several different types of mobile cranes, including: 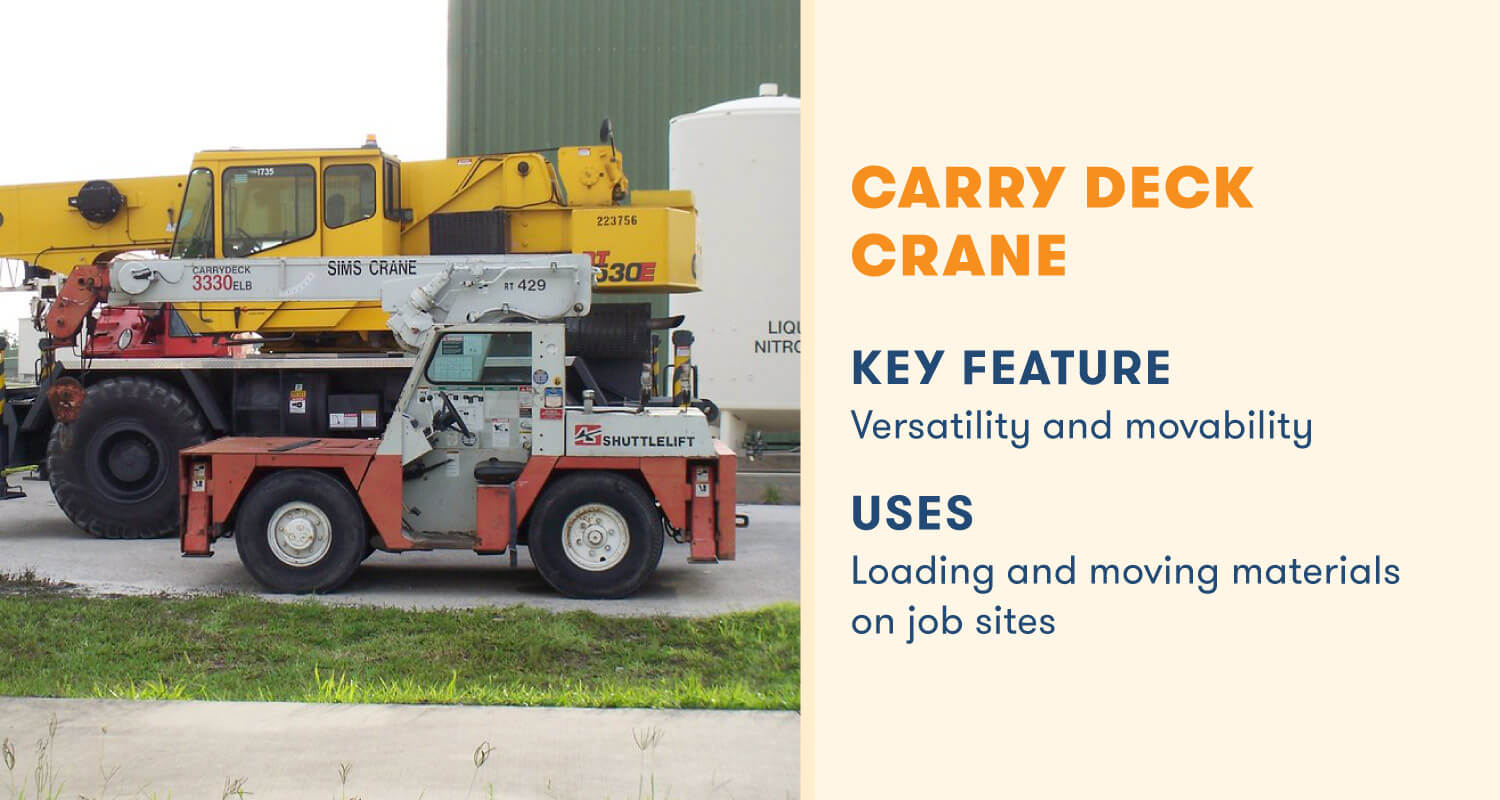 Carry deck cranes are a relatively new type of crane that evolved from the older pick and carry model that was first introduced in the 1980s. They’re small, four-wheeled, can rotate a full 360 degrees, and are more portable than other types of cranes. Carry deck cranes are simple to set up, and their small size easily allows them to navigate around confined and open spaces, making them a staple on many job sites. 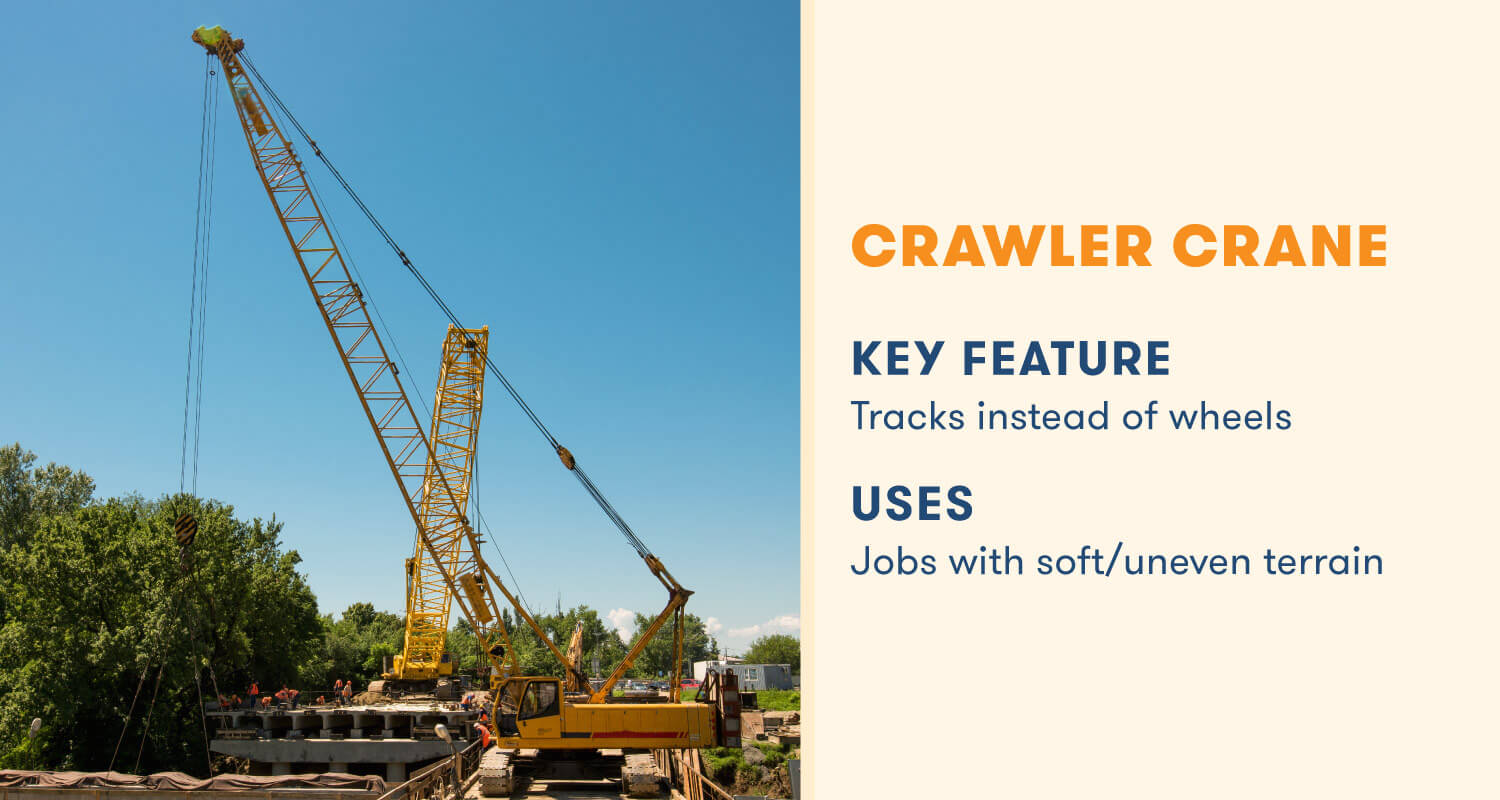 Unlike the wheeled carry deck cranes, crawlers are track vehicles. Instead of wheels, crawlers are built on an undercarriage fitted with a pair of rubber tracks. Though this limits the crawler’s turning capacity, the tracks make it possible to use on soft ground and sites with limited improvement without sinking.

Some crawler cranes have an attached telescopic arm that allows it to change its size, making them highly adaptable on many terrains. Unlike carry decks, however, crawlers are best used for long-term projects due to their bulkiness, special set up, and need to be transported from site to site. 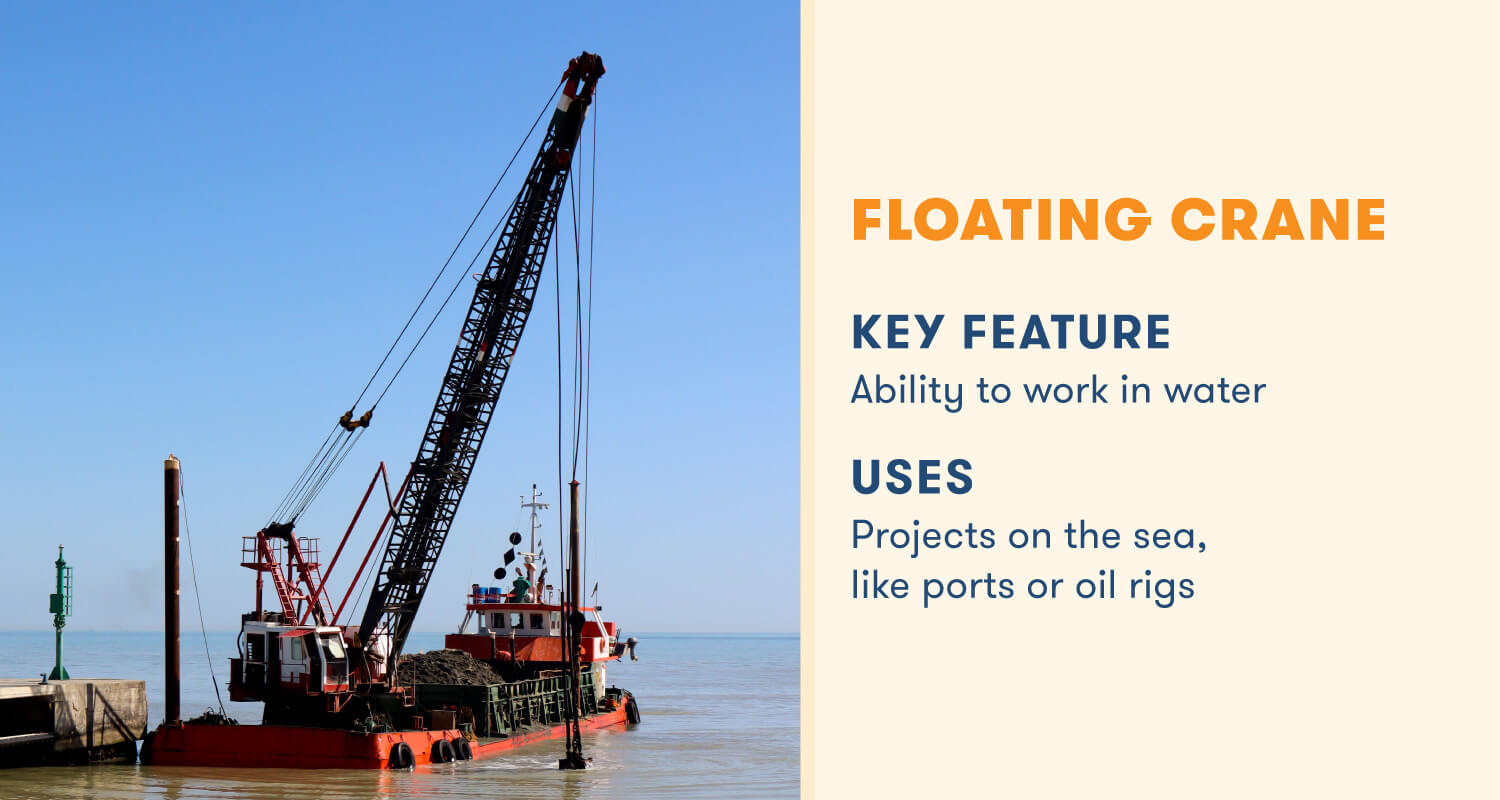 Also known as a crane vessel or crane ship, these floating cranes are used for projects at sea, such as ports or oil rigs. These cranes have a rich history—they have been used since the Middle Ages and, with the help of continuous technological advancements, have helped many generations of people.

As of today, there are several types of floating cranes as well, such as the sheerleg and semi-submersible. Nevertheless, the only difference floating cranes have from the other common types is that they’re used at sea. 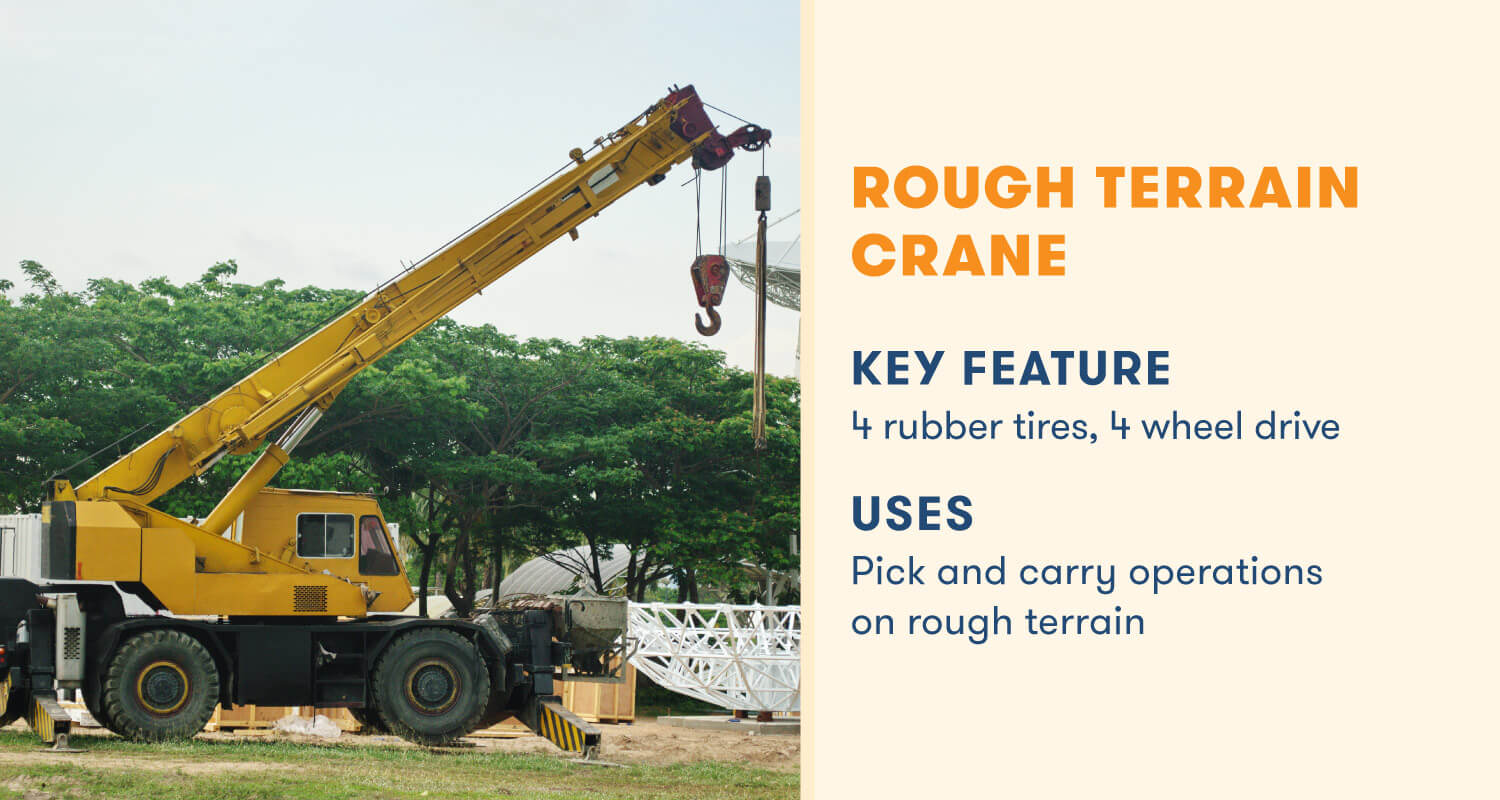 As the name implies, these cranes are used for pick and carry operations off-road and on rough terrains. A rough terrain crane is built similarly to a crawler crane, but instead of tracks, the undercarriage is outfitted with four large rubber tires that are typically equipped with four-wheel drive. Rough terrain cranes are also fitted with telescopic booms and outriggers to improve stability and make mobility much more manageable in tight and rough areas. 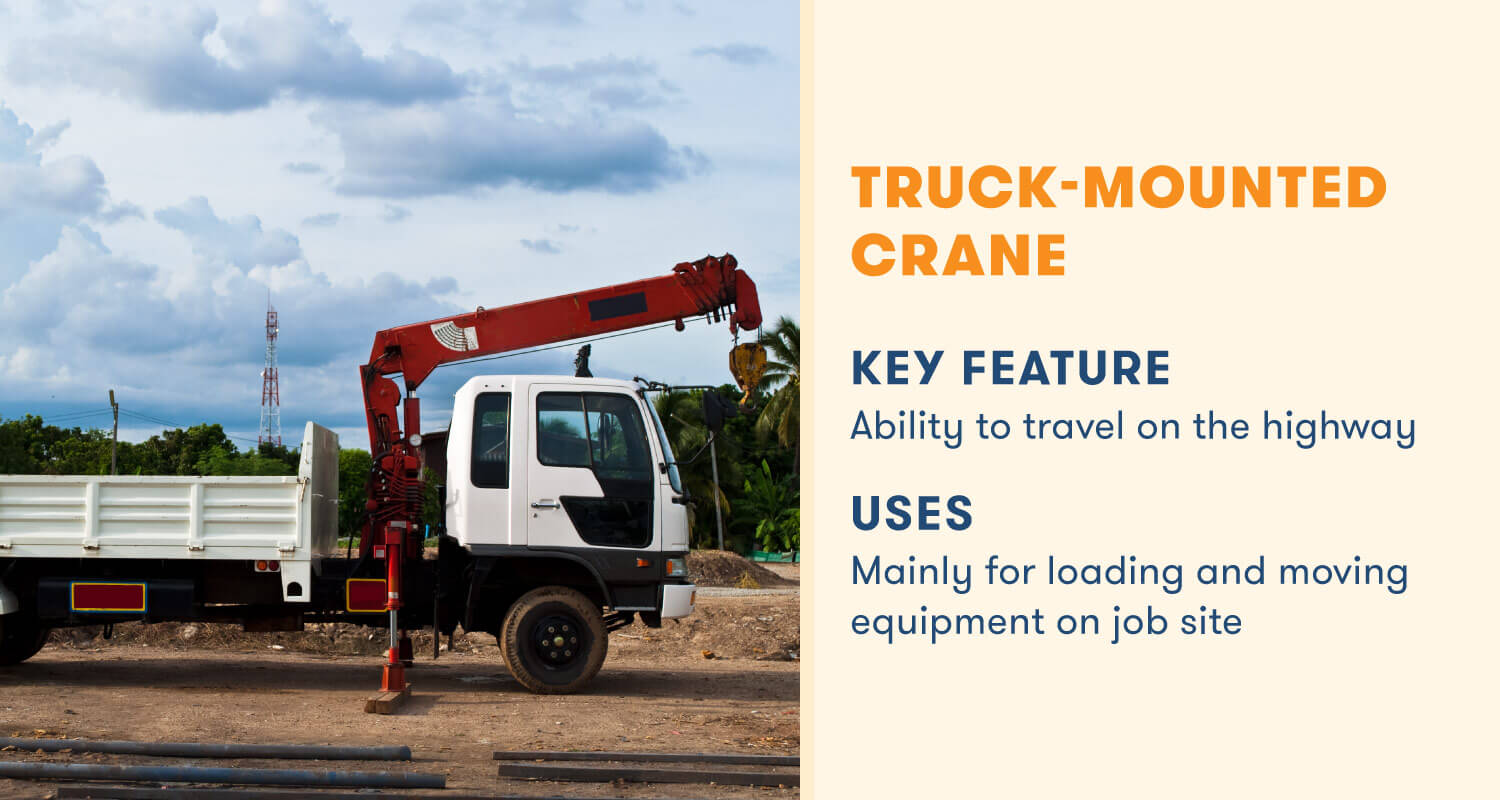 Truck-mounted cranes are made up of two parts: the carrier (truck), and the boom (arm). Due to their unique build, they’re able to travel easily on the road with no unique set up or transportation equipment.

Fixed cranes are typically fixed in one location or spot, and most need to be brought in and assembled at the site of the project. What fixed cranes lack in mobility, they make up for with the ability to lift heavier loads and reach even greater heights. These crane types are set in place for the duration of a project. 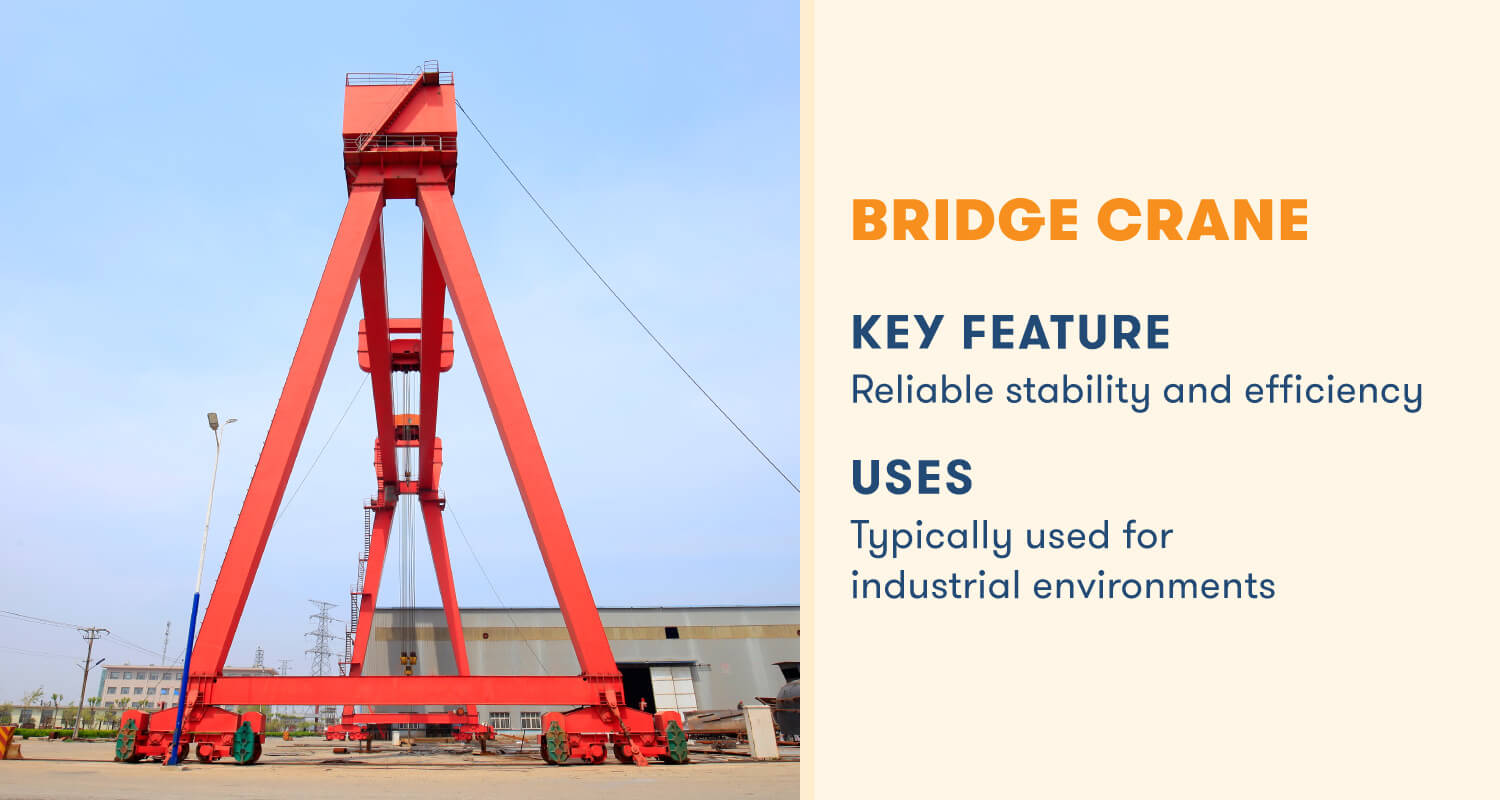 The bridge crane, also known as an overhead crane, are typically found in industrial environments. Its name comes from the fact that it resembles a bridge supported by two steel beams that straddle the workload, with the hoist (lifting mechanism) traveling along the bridge part of the crane.

There are two subtypes of overhead cranes: gantry and jib cranes.

A variant of the overhead crane is the gantry crane, although sometimes the two terms are used interchangeably. The most significant difference between a bridge and gantry crane is that the gantry crane is supported by two a-frame steel legs and is typically built on a track. Gantry cranes are commonly seen at shipping docks and ports, lifting cargo off ships.

Jib cranes are another version of the bridge crane. These types of cranes are permanently installed over a workstation and typically used for repetitive tasks.

The jib, or arm, is typically mounted on either a wall or floor-mounted pillar with a moveable hoist and may have some additional movement. 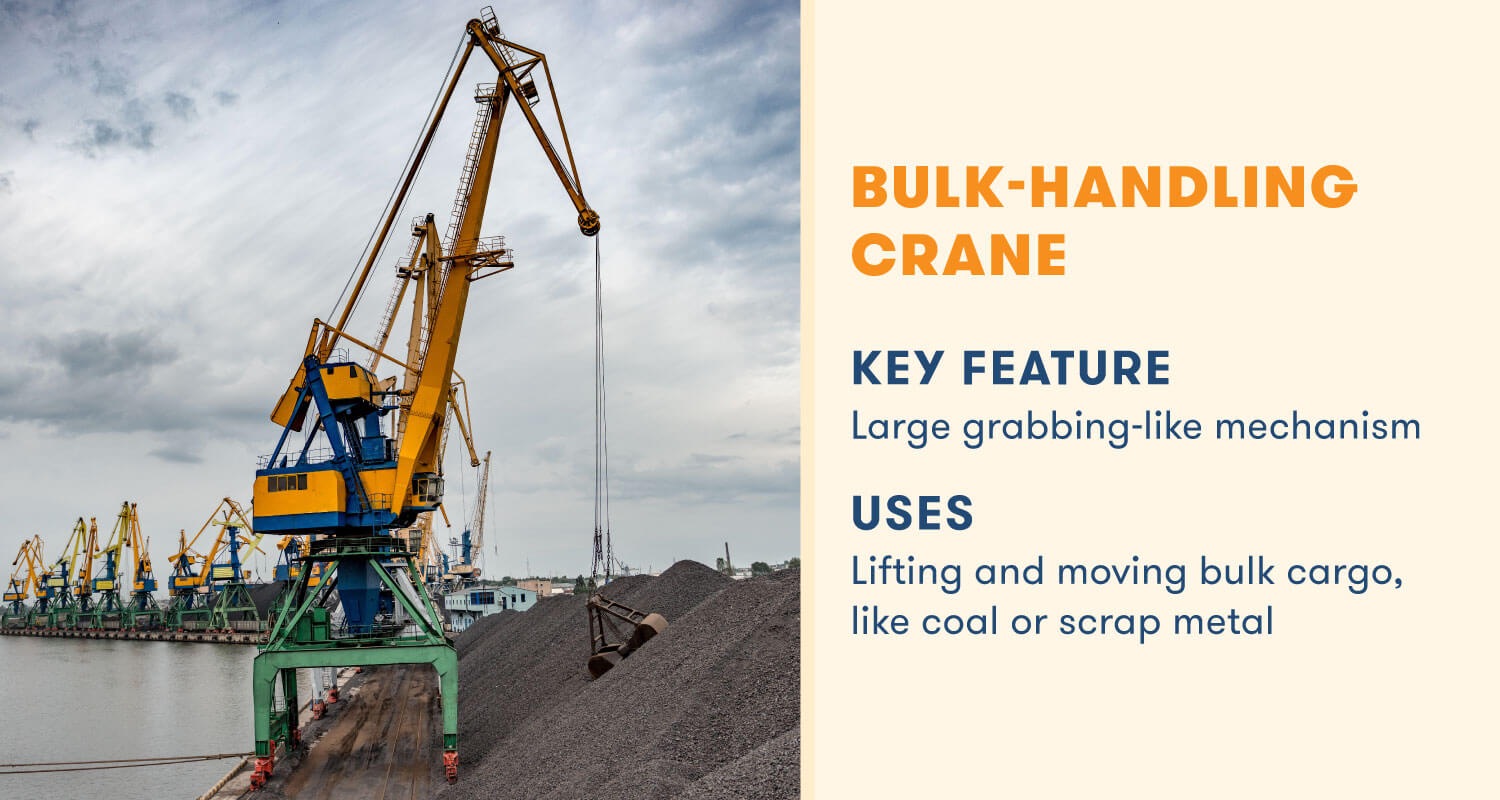 Bulk-handling cranes are used to carry large volumes of heavy materials, like coal or minerals. Instead of a hook at the end, bulk-handling cranes have a specialized hook that utilizes a grabbing mechanism and a bucket to grab, hold, and lift materials. 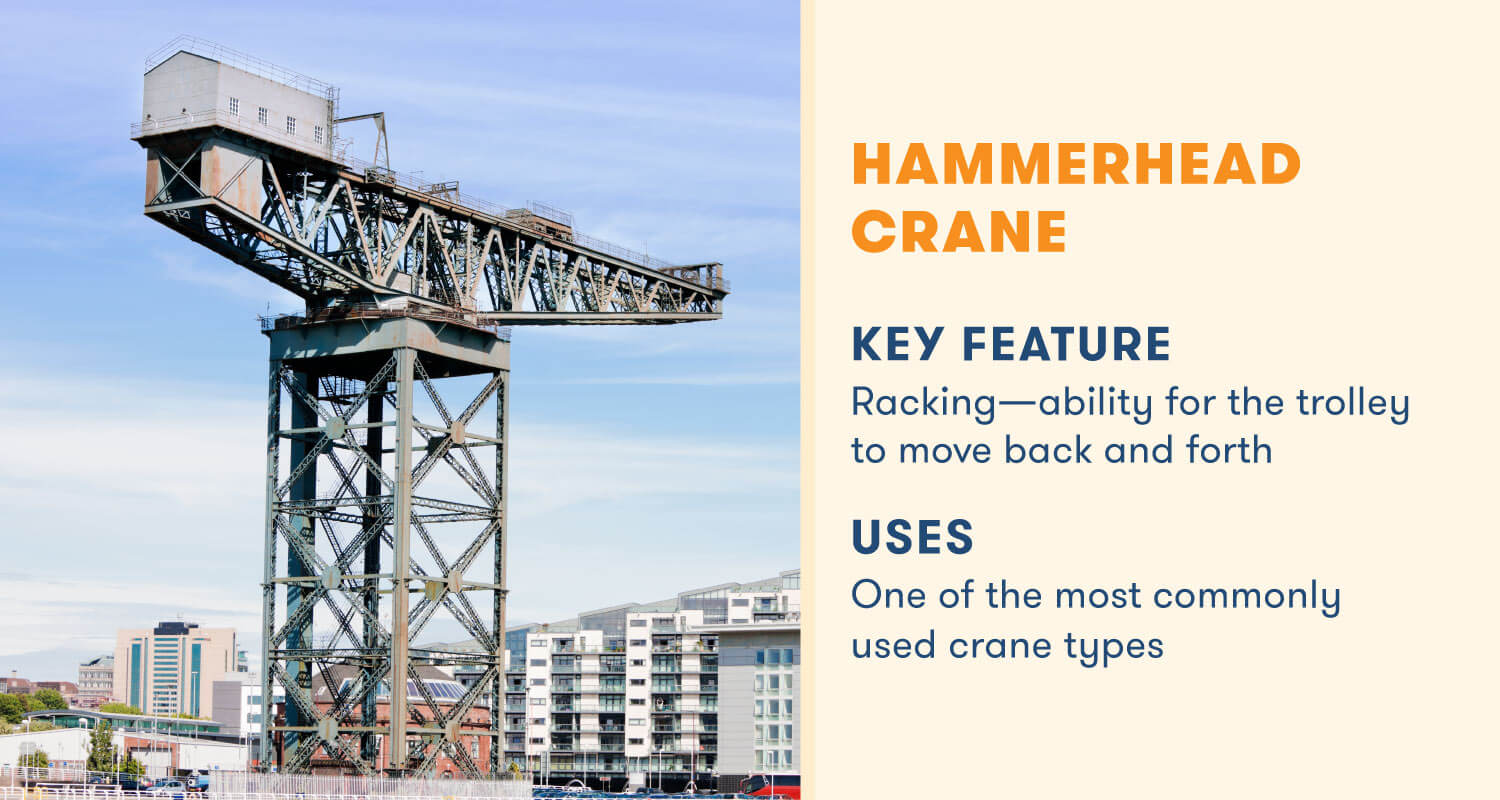 Hammerhead cranes are some of the most commonly used in construction projects. This crane has a horizontal, swiveling lever resting on a fixed tower. The trolley is held in the forward part of the arm and is counterbalanced with the part of the arm that extends backward.

Hammerhead cranes also offer a feature known as racking, which allows the trolley to move forward and back horizontally along the crane arm. These cranes can be extremely heavy and are assembled on the job site. 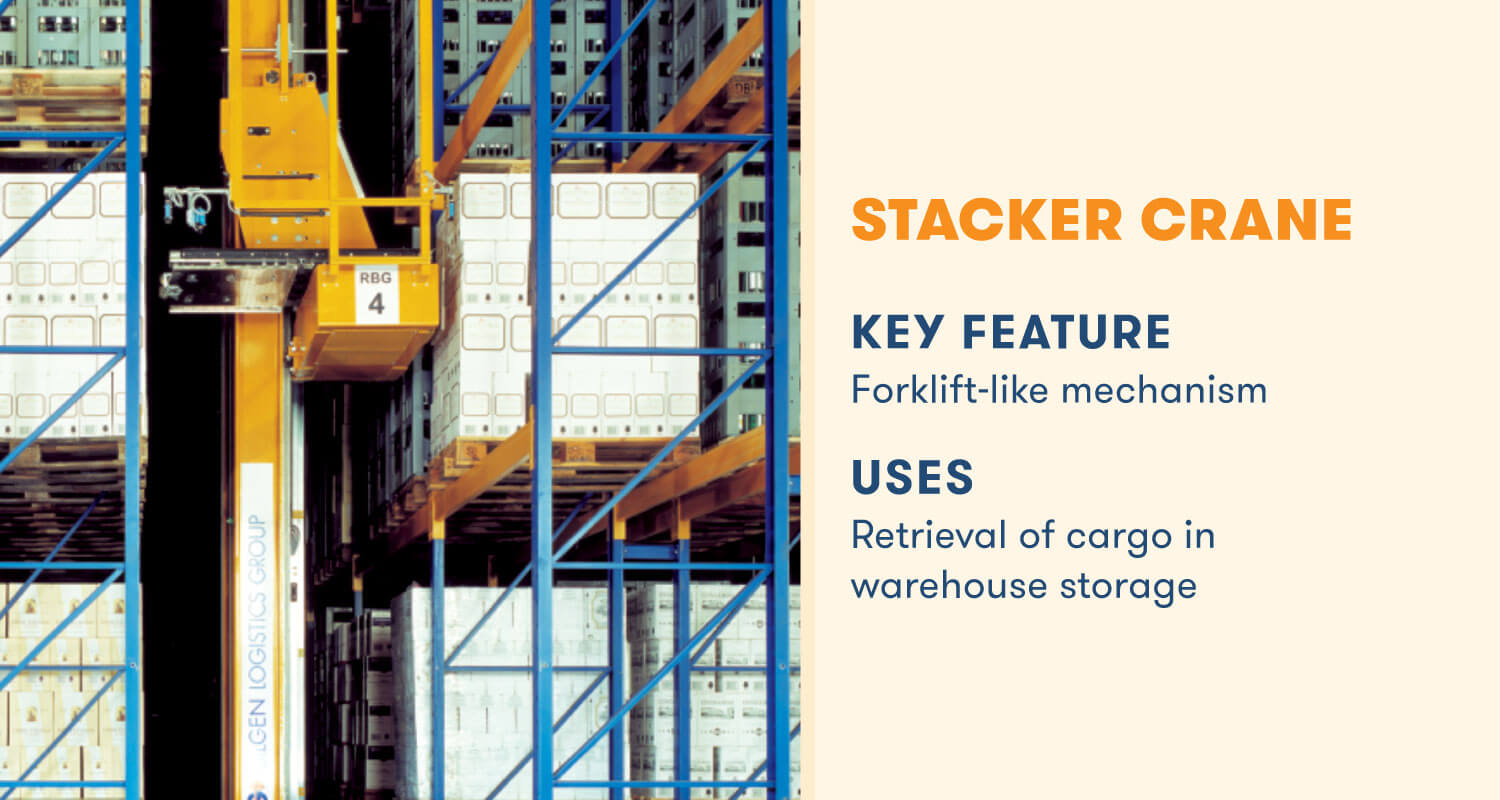 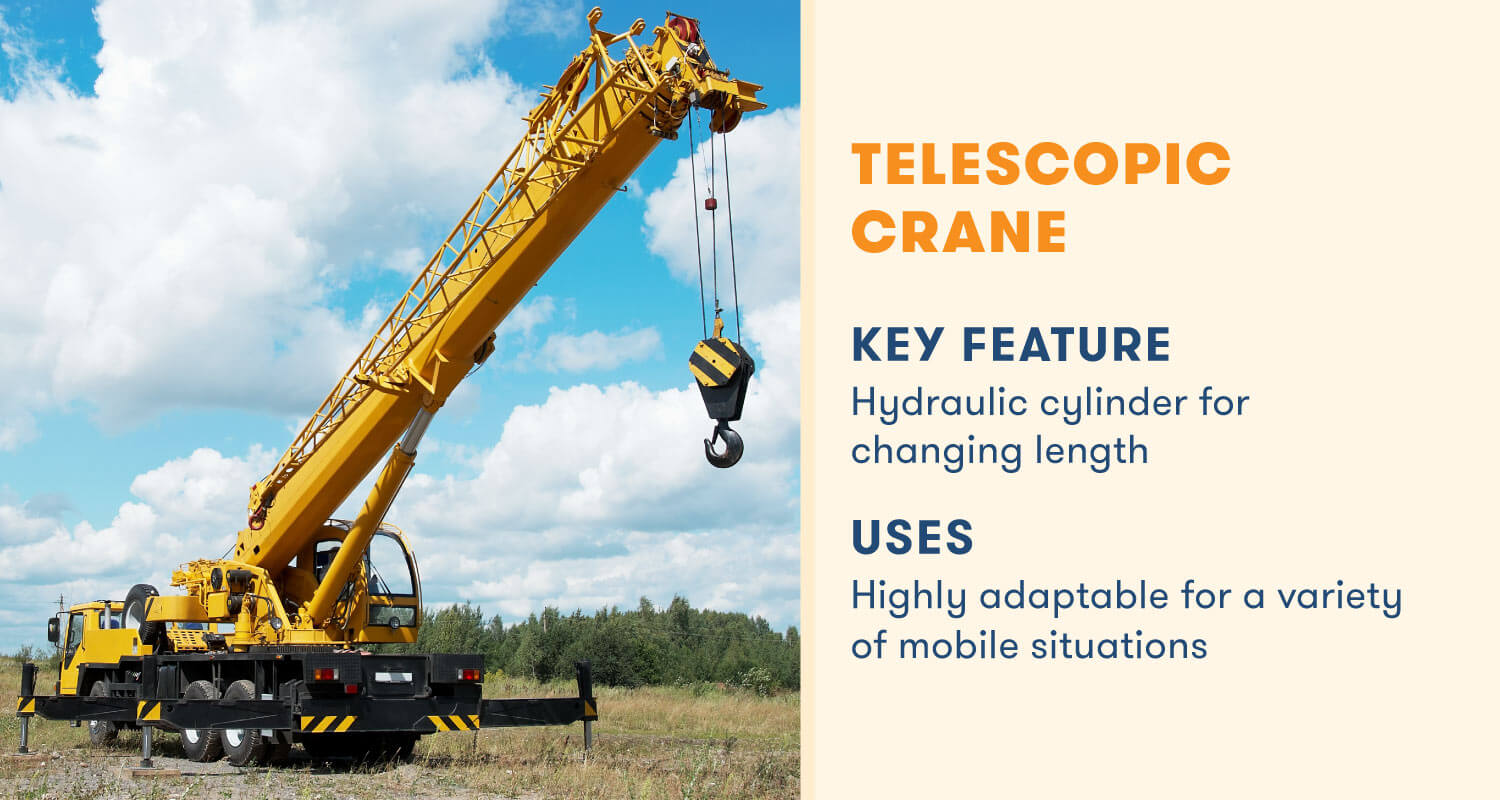 Due to the unique nature of their boom being able to collapse and compact itself, telescopic cranes are highly adaptable for a variety of situations, such as short-term construction jobs as well as some rescue operations during natural disasters or other emergencies. 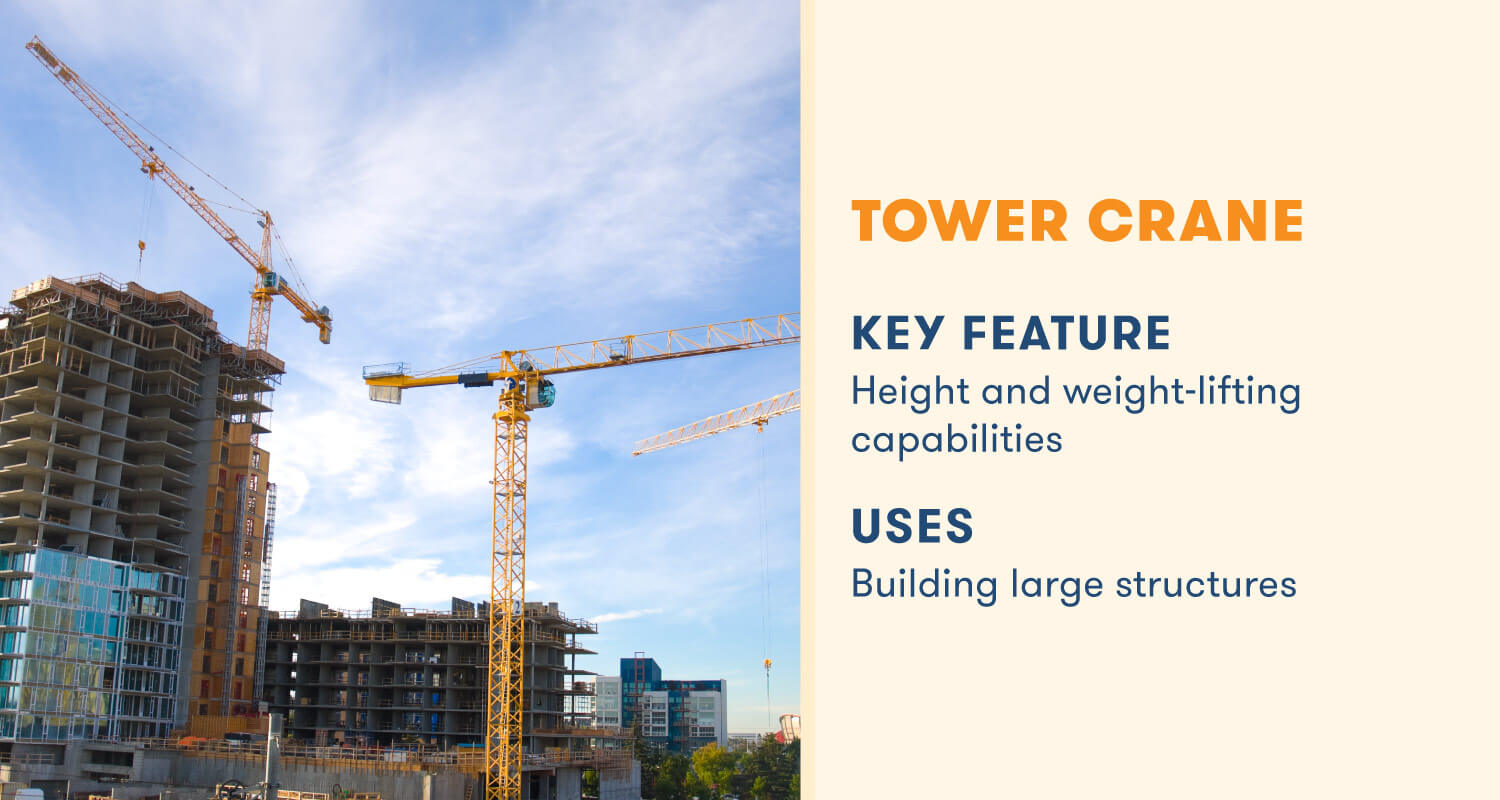 Commonly used in the construction of tall buildings, tower cranes are beautiful machines that offer amazing lifting capabilities. Due to their size, tower cranes are equipped with an operating cab that controls the entire crane. Tower cranes have their jib extending horizontally from the mast (tower part), which itself rests on a concrete base.

A luffing jib is able to move up and down, while the fixed jib has an operating dolly that moves materials horizontally. The engine (called a slewing unit) that controls the rotation of the crane sits on the top of the mast.

Practically all construction jobs require the movement of heavy materials, so having a crane on hand is crucial. To safely and properly use a crane, you’ll need to have an operator, signal person, and rigger. As of November 10, 2018, OSHA requires all crane operators to be trained and certified, and most states require the operator to have a license when using a mobile crane. However, the rigger and the signaler only have to be “qualified” to do the job.

Once you’ve hired a certified crane operator, you need to figure out which crane you need. Unfortunately, just getting the biggest crane won’t work — for example, an all-terrain crane for a small house renovation might be overkill, and a carry deck crane might be more appropriate.

Picking the right crane involves figuring out the project’s terrain, the size of the project site, the weather, and the weight of the materials. You also want to consider the length of the project as some cranes, like the crawler crane, are better used for long-term projects than their counterparts. Once you have all of your project specs, you’ll be able to determine which type of crane you’ll need for a successful construction job.

How To Operate a Mini Excavator
States Where the Most Home Development is Happening
Schedule of Values: Why, How and When? (Template)
9 Types of Backhoe Attachments
Backhoe Sizes: Find the Right Fit for Your Project
Types of Bridges
Lean Construction: Principles Shaping the Future of Construction
Forklift Maintenance 101: Benefits, Frequency and Cost
How Does a Forklift Work
What Telehandler Size is Right For Your Job?