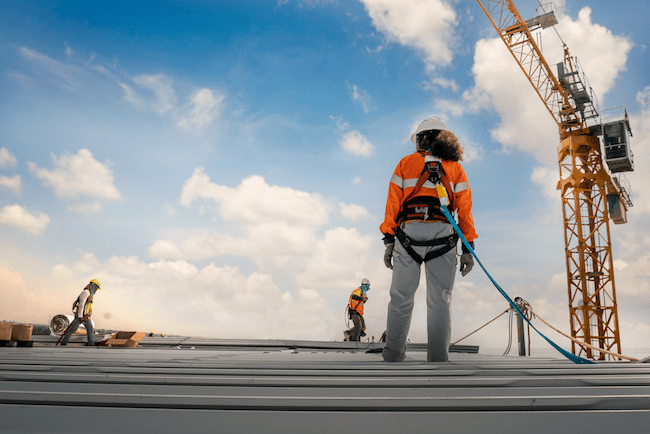 Operating a construction job site is dangerous by nature, so the responsibility of protecting the site falls on the project managers, superintendents, and other leaders on the job. Some of the most common risks on a construction site include fire, theft, and water damage. Should any of these issues strike, you could end up with damage that is expensive and time-consuming to fix. On many job sites, even just one of these problems could change the estimated completion date, putting your company at risk for lower customer satisfaction. Avoid these risks and protect your job site by following these simple tips.

One of the major risks on a construction site is fire damage. One reason this risk is high is the fact that a fire suppression system is often one of the last systems to be installed in a building. As a result, if a fire does break out, it will be harder to extinguish it. You may not have enough fire extinguishers in your trailer or on the site to handle a large fire. Fire spreads fast when moving across highly flammable materials.

A building that has only been framed has a lot of exposed wood, which could become kindling for the fire. Hot work on a job site can also increase the risk of a fire. This work could include welding, grinding, and cutting. Improper use of any of the tools or equipment involved in these processes could cause a fire. Certain types of temporary heating equipment might also put a job site at a higher risk for a fire. Wiring and lighting could spark. The risk is higher when these lighting or wiring is put in temporarily and may not be up to building standards. Smoking is a leading cause of fires on job sites as well.

Reducing the risk of fire can protect your job site from this damaging and dangerous concern. In order to lessen the risk, you need to set some ground rules from day one. Smoking should be prohibited within the structure as well as near any flammable materials. Designate smoking areas that are far away from anything that could catch fire and burn. Post signs and enforce the smoking rules vigilantly. Any hot work that is contracted out should be handled by licensed and permitted workers. Follow the regulations outlined in NFPA 241 (PDF file), the Standard for Safeguarding Construction, Alteration, and Demolition Operations.

If you allow any of your workers or subcontractors on the job site to set up temporary lighting or heating equipment, it should be approved by your team. Make sure that any equipment is set up correctly and working properly. Place heaters only on platforms or non-combustible flooring and keep areas around the heaters completely clear. Before the fire suppression system is in, make sure to keep plenty of fire extinguishers available. They should be easy to access, and all laborers should know how to use them.

Another risk on a construction site is theft. Before the building is complete, fewer physical barriers keep people from entering without proper access or authorization. Windows and doors serve as barriers, but these are often some of the last things to be put up on a building. A construction site often uses temporary fencing to set a perimeter. However, people can simply climb over the fence or break through it fairly easily.

Most construction companies keep certain pieces of equipment on-site for convenience, especially when they’re working on a specific part of the project. For example, the concrete subcontractor may leave forms and materials on the job site throughout the pours. Doing so makes it easier on the laborers but can increase the risk of theft. Construction tools and equipment are valuable and easy to sell, making them prime targets for burglars.

Most tools and equipment used at a site won’t be specifically marked, logo’ed, or otherwise identifiable. A thief can easily make quick cash by selling the items at a pawn shop or to the highest bidder. Instead of taking the risk, consider renting equipment, so you have less on-site that creates a target for thieves.

In addition to theft, a similar risk on a construction site is vandalism. Someone may break through the fencing simply to spray paint the unfinished walls or destroy the windows. Some burglars leave a wake of destruction in their path. Vandalism can cause a lot of damage in a short period of time. It’s often for no apparent reason, making it even more frustrating.

Mediating the Risk of Theft

The first step to reducing the risk of theft and vandalism on your job site is to install and maintain a strong physical barrier. This could include a single locked access gate that is only accessible to subcontractors and members of your team. You may want to install warning signs around the fencing that only those who are authorized should enter. Lighting can go a long way to reduce theft, especially since many break-ins happen late at night or early in the morning. Install temporary lights that can illuminate the site. By keeping the space well-lit, you can reduce where thieves can hide.

Along with the physical barrier, you should also use surveillance and security systems for added protection. An electronic surveillance system could include cameras placed around the site, along with sensors and alarms. More advanced sensors can detect temperature changes, water exposure, or breaking glass, which gives you a better idea of exactly what is happening at your site. If your job site is in a high crime area or has been broken into before, consider hiring a security guard. The guard should be there during non-working hours for an added layer of protection.

Tools, equipment, and building materials are prime targets for thieves, so keep things locked up and out of sight when they’re not in use. Keep inventory tracking up-to-date so things can’t easily go missing. Make sure to order items as they’re needed instead of stocking up and keeping a lot of extra stuff at the site.

Water damage is another major risk on a construction site. Water can cause a substantial amount of damage in a short period of time. If your building has framing in place, the water can rot the wood or cause it to swell and shift. When you’re further along in the building process, too much moisture can lead to mold growth, which is expensive to remediate. Water damage is the top cause of loss on a job site, so it’s important to take steps to reduce the risk.

Broken pipes, weather changes, and vandalism can all lead to water damage on a job site. When you have multiple subcontractors and laborers working at once, someone can make a mistake or hit a pipe by accident. This common problem can have serious results, so it’s important to have a plan in place to prevent, detect, and respond to water damage concerns.

The first step in reducing the risk of water damage is only allowing licensed and experienced plumbers to work as subcontractors on your job site. If you have someone working on the pipes who doesn’t know what they’re doing, the odds of an issue go up. All plumbing work should be cleared before the plumbers start. Everyone working on the site should know where pipes are located to avoid digging too deep. Another step in preventing water damage is following all construction regulations. Keep up with regular quality control testing and conduct periodic inspections throughout the construction process.

Along with prevention, your site needs detection systems in place. Obviously, preventing the damage in the first place is the goal, but you need to be able to act fast if something goes wrong. Early detection of water in a building can lessen the amount of damage that occurs, so make sure all workers know how to respond to and report any potential leaks. An electronic leak detection system can alert you to potential uncontrolled water as well. This is especially helpful if the damage happens when you’re away from the site.

The third step in lessening the risk of water damage is developing a clear response plan. If water spreads through the building, everyone on the site should know what to do. You should have equipment available to clear out the water. Industrial fans and dehumidifiers should also be accessible to lessen the damage. When you start using fans and other moisture-reducing equipment right away, you can control how much damage occurs to your building.

Protecting your job site is important because it reduces the risk of damage to the structure throughout the phases of construction. Certain risks on a construction site can also harm the laborers and subcontractors on the site, so reducing risk is important for safety. If you need certain equipment to manage damage that has occurred due to fire or water damage, consider renting it to save money. You won’t typically need the equipment for very long, so renting it allows you to simply return it when you’re done. With access to the right equipment, along with a thorough planning process, you can reduce the risk of serious damage on your site.

6 Innovative Construction Wearables Reshaping Safety
Pet Safety Around Construction Sites, Renovation Projects, and Heavy Equipment
Construction Site Noise: How Loud is Too Loud?
How to Create a Safe and Inspiring Homeschool Environment
Keeping Seniors and Special Needs Individuals Safe Around Construction
14 Essential Aerial Lift Safety Tips
25 Construction Safety Statistics and Trends for 2020
Who Should Get Forklift Training and Certification?
Who All Needs Boom Lift Certification and Training?
Emergency Preparedness - How to Choose a Portable Generator for Your Household Appliances
×
Enter jobsite location to see local rates:
Use Current Location
Processing...