What Is an Air Change Rate and Why Is It Important? An air change rate is the number of times every hour that new air from outside enters a room and is mixed and exchanged with old air from inside.

Why is this important? If your air change rate is too high, you’re losing air that you’re paying to heat or cool. If the rate is too low, your air is becoming stale and stagnant, which can also lead to a buildup of toxins, viruses, pathogens, and the like.

Knowing the air change rate of your house or structure is important for health. It’s also important to know when installing or replacing HVAC equipment or insulation materials or planning a new construction project.

“Ideal” air change rates are given in a high to low range because determining the rate isn’t an exact science. The rates vary depending on the type of structure, the air system in use, the desired air quality, and the efficiency of the structure.

Rates for air change (and ventilation) are calculated per person. Locations that will have high occupancy will need to have higher air change rates.

The same goes for structures that have cigarette smoking areas or where harmful emissions might be released into the air. With these indoor pollutants, increased ventilation is required — along with the installation of a good HVAC system — to properly exchange the indoor air.

There are two types of airflow in any building: controlled and uncontrolled.

As construction takes place, holes in a structure are continually being created and filled. Builders need to ensure that only designed holes remain when the structure is complete.

The presence of undesigned holes can cause what’s referred to as airflow imbalance. It can cause air to be drawn in from the outside (known as return flow) faster than it can be supplied through an HVAC system.

You’re probably familiar with examples of this from your home. If you leave a window open on a hot day when you’re running the air conditioner, the AC supply won’t be able to keep up with the hot air coming in from outside. This hot air replaces it as the cold air escapes. Another example is warm air — or cold air in winter — that can enter more readily through single-pane windows or a poorly insulated attic while cooled or heated air escapes.

Holes in the HVAC apparatus itself, such as in ducts, pipes, or the main duct trunk, can create the same kind of problem. That’s why it’s important to ensure that an adequate HVAC system is installed, that ventilation is adequate, and that all undesigned holes are filled to ensure maximum control of airflow.

How To Calculate Air Change Rates 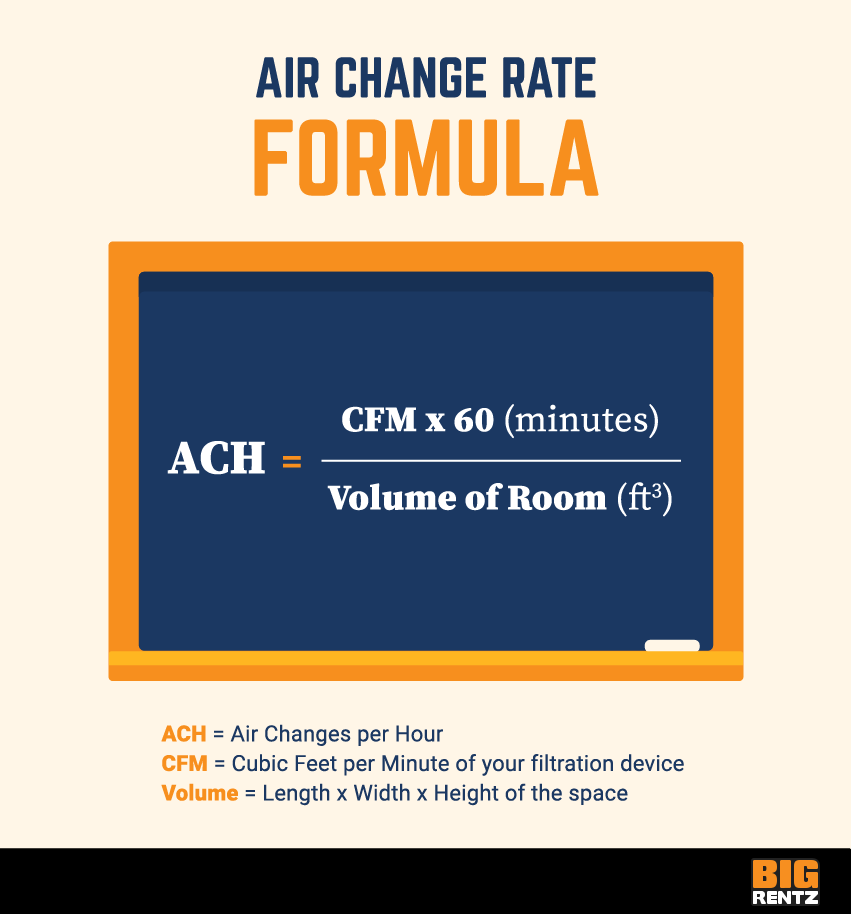 Air change rates are calculated as air changes per hour (ACH). The formula to calculate the rate is the cubic feet of air per hour moved divided by the volume of the structure.

The result of the calculation shows how many times, per hour, a structure can be emptied and filled with air.

How To Increase Air Change Rates

Increasing a structure’s air change rate doesn’t have to be complicated. Sometimes it’s as easy as turning on fans, such as those in a bathroom or a kitchen hood, or opening windows and doors to allow some fresh air in.

However, using fans and opening doors and windows aren’t long-term solutions for increasing air change rates. Increasing incoming outdoor airflow can be limited by weather conditions and outside air quality.

Making adjustments on a mechanical HVAC system is a more reliable method, such as opening dampers.

Increased filtration can be achieved by installing an appropriate filter in the system, as recommended by an HVAC professional. Using HEPA air purifiers can add to your air change methods by removing airborne particles, such as dust and viruses, from room air.

Air Changes per Hour Based on Location Type 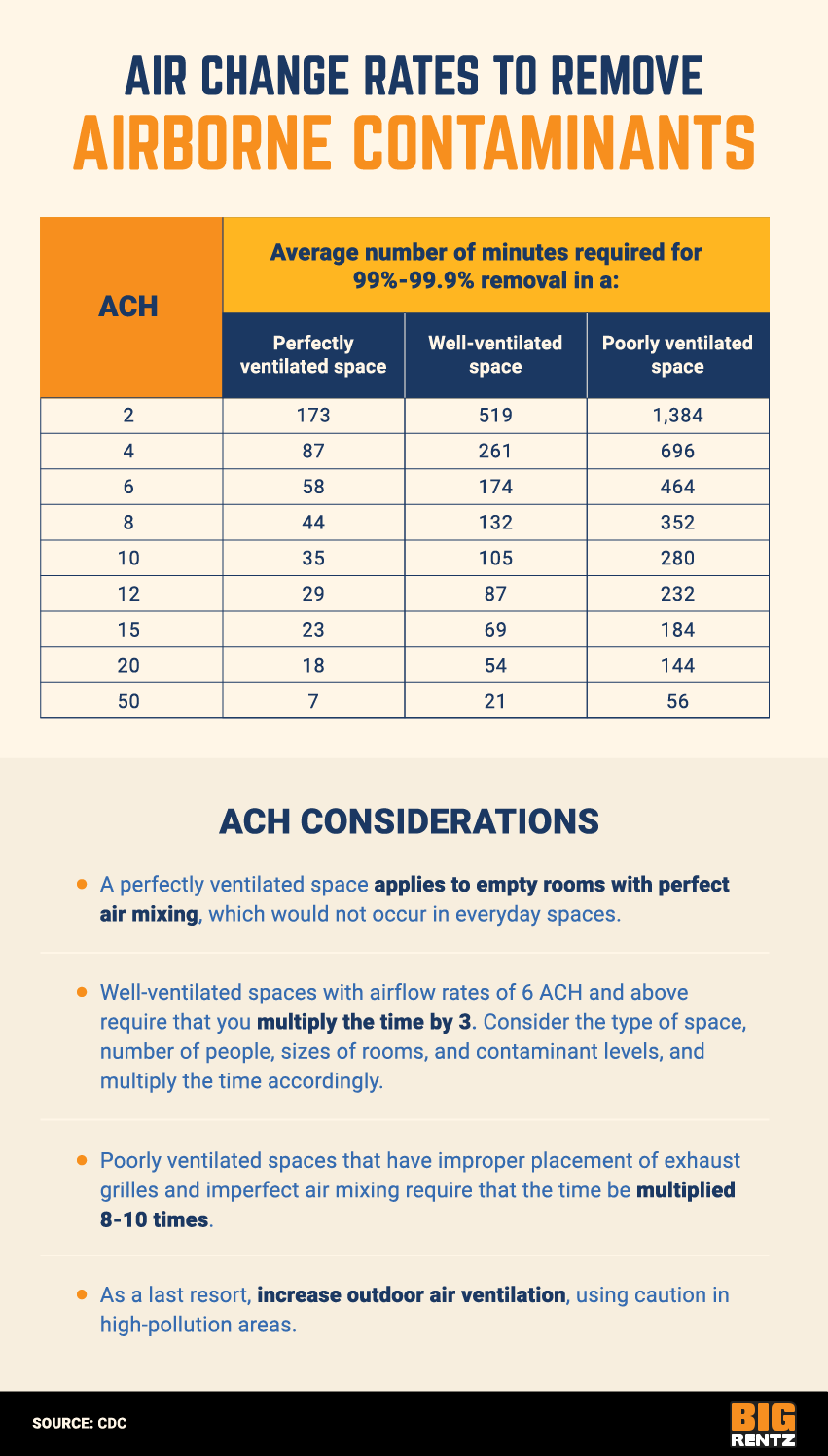 Air changes per hour vary based on the number of people present and the location type, differing for structures such as homes, hotels, offices, stores, schools, sports facilities, or restaurants.

According to ASHRAE standard 62.1 (“Ventilation and Acceptable Indoor Air Quality in Residential Buildings”), homes need to have at least 0.35 air changes of outdoor air for indoor air per hour to maintain the quality of the indoor air.

Recommended ventilation rates are based on room size, usage, and the number of people who will be in the room.

Other organizations have guidelines in place for various types of buildings. For instance, the Centers for Disease Control and Prevention (CDC) has created a table showing how long it takes to achieve 99% efficiency at health care facilities based on the number of air changes per hour.

ASHRAE recommends ventilation rates as low as 2-3 per hour for offices, 5-6 for schools, and 6-12 for hospitals, but expert opinions vary. For instance, Harvard epidemiologist Joseph Allen recommends 4-6 air changes per hour in schools, while physicist Christian Kähler of the University of Federal Armed Forces in Munich, Germany, counsels six should be the minimum.

The Pros and Cons of Higher Air Changes per Hour

There are pros and cons to using ventilation to achieve the recommended air changes per hour.

However, an air change rate of three to six is recommended. The higher rate can be achieved by opening doors and windows and using filtration systems. The trade-off from increasing the air change rate to help with the pandemic is decreased energy efficiency.

Passive ventilation is also known as natural ventilation. As the name suggests, this type of ventilation uses natural forces (wind, thermal buoyancy, etc.) to move air in and out of an indoor area.

As mentioned earlier, opening windows, doors, and vents — and using fans and exhaust vents — will make use of natural, passive ventilation to increase air change rates.

Active ventilation uses a system, like HVAC, to move air at a more regulated rate. In other words, HVAC systems can help achieve the desired number of air changes per hour on a more consistent basis.

An active ventilation system also plays a greater role in removing moisture and airborne pollutants from a structure’s environment. This benefits both the health (fewer viruses, etc.) and comfort (temperature control) of the people in the building.

The Benefits of Proper Ventilation 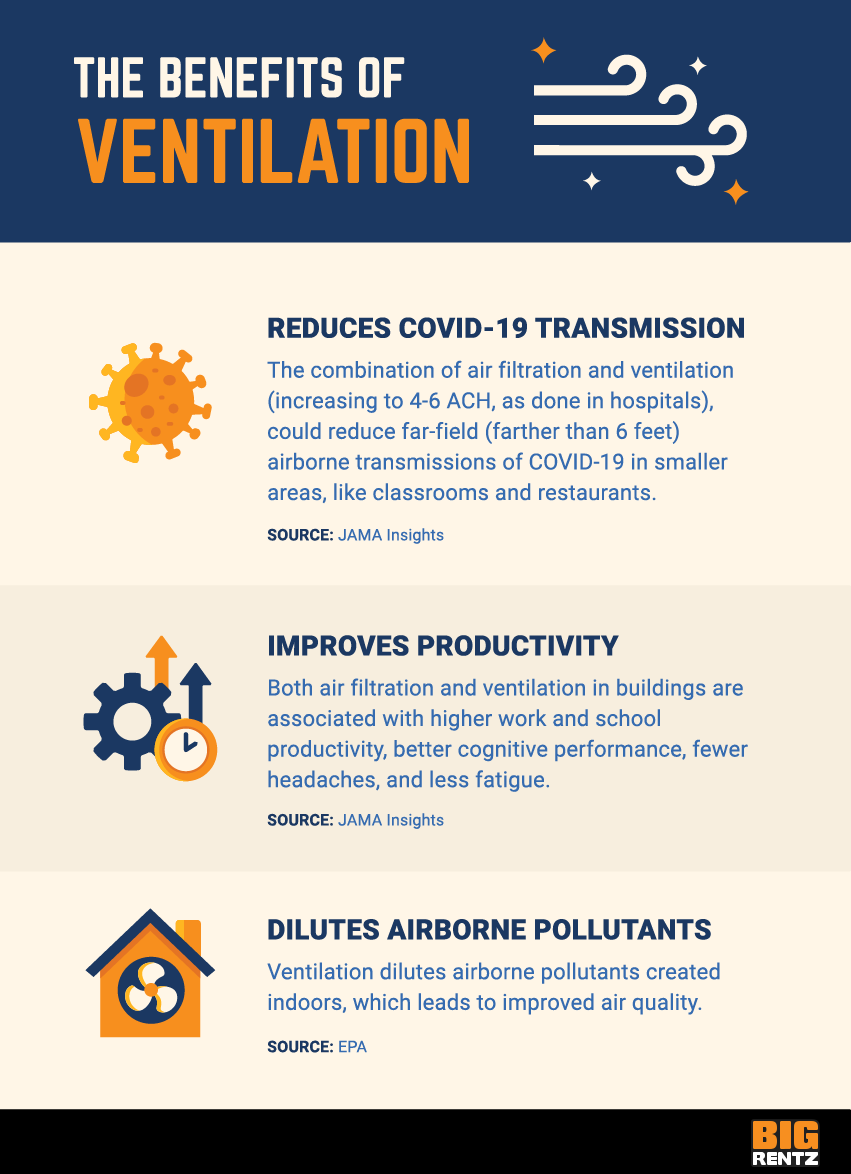 Proper ventilation increases air change rate performance by reducing airflow imbalance and ensuring that clean air is distributed throughout the building. It’s important to reiterate, however, that proper ventilation involves more than design; it involves functionality, which can be impeded by leaks and undesigned holes.

Such leaks can compromise the system by interrupting the desired airflow and replacing air being supplied by an HVAC system with air returning from outside the space being heated, cooled, or in the case of an HVAC air purifier, cleaned and recirculated. Proper ventilation allows air to be circulated where you want it, as the air will be drawn in and released only through controlled airflow. Ensuring this occurs creates several benefits.

It can reduce levels of pollutants and airborne contaminants by limiting the intrusion of air from the exterior of the building. This can be particularly helpful in areas with poor air quality from industrial pollution or, as in California in the past few years, smoke from massive wildfires.

But HVAC systems in most schools, commercial structures, and office buildings have the added benefit of being equipped with filtration systems that help reduce the risk of spreading internal contaminants. This can be smoke from a cigarette or an airborne virus, such as the flu or COVID-19.

The American Society of Heating, Refrigerating and Air-Conditioning Engineers (ASHRAE) recommends the use of such filters in HVAC systems. The filters, which are commonly used in homes, should have a minimum efficiency rating value (MERV) of 13 or higher, the level at which they’ll filter out just 75% of particles 0.3 to 1 micron in size.

That’s why HVAC systems in places like commercial buildings and medical centers contain high-efficiency particulate air (HEPA) filters, which have a MERV number of 17-20, the highest possible, and can filter out 99.97% or more of particles of that size.

Proper ventilation also allows particles to be removed from the air more rapidly. This can reduce contamination because some particles won’t even have a chance to land on surfaces such as countertops, tables, chairs, and other areas that could facilitate transmission.

Beyond the health benefits, proper ventilation can also save you money by reducing the expense it takes to control an indoor climate. Controlling airflow means your HVAC system won’t have to run as often in order to maintain a constant temperature. This won’t just save you money on your energy bills, it will save wear and tear on the HVAC system itself and potentially prolong its life.

Air change and air change rates are very important in structures like homes, offices, and hospitals.

When inside air is mixed with outside air at the proper frequency, air quality increases, and the chances for infections or other health hazards decrease.

Not only that, the proper air change rate — utilizing both passive (doors and windows) and active (HVAC systems) ventilation — helps ensure that everyone inside is as comfortable as possible.

4-Step Guide to Backfilling Trenches and Foundations
What Is a Business Disaster Recovery Plan?
What is a Crane Boom?
The 3 Man Lift Types Used in Construction
American Infrastructure Statistics and Facts to Know in 2023
The Ultimate Guide to Building a Generator Enclosure
5 Building Construction Types: Fire Resistance Ratings
Types of Concrete Blocks Used in Construction
15 Must-Read Construction Articles
The 10 Trenching Safety Tips That Can Save a Life