Cities are famous for their skylines, but can people really recognize them?

From famous buildings and towering skyscrapers to dazzling lights and iconic geographic features, skylines help set cities apart. As cities continue to expand and construct things like skyscrapers, smart structures, and green buildings, we can expect skylines to become even more defined. According to FMI, cities like Houston and New York are among five U.S. cities that comprise 20% of the country’s total construction.

To see the cultural impact of skylines and their construction, we surveyed 4,000 Americans to see if they could identify the skylines of four cities including Houston, Philadelphia, Dallas, and Los Angeles. We tested participants with a skyline image and multiple choices and chose a mix of cities that are experiencing a construction boom as well as those known for having many construction projects. To get a measure of how buildings shape a skyline, we selected day time images of skylines that are focused mainly on the buildings.

Read on below for city skylines tested in our study. 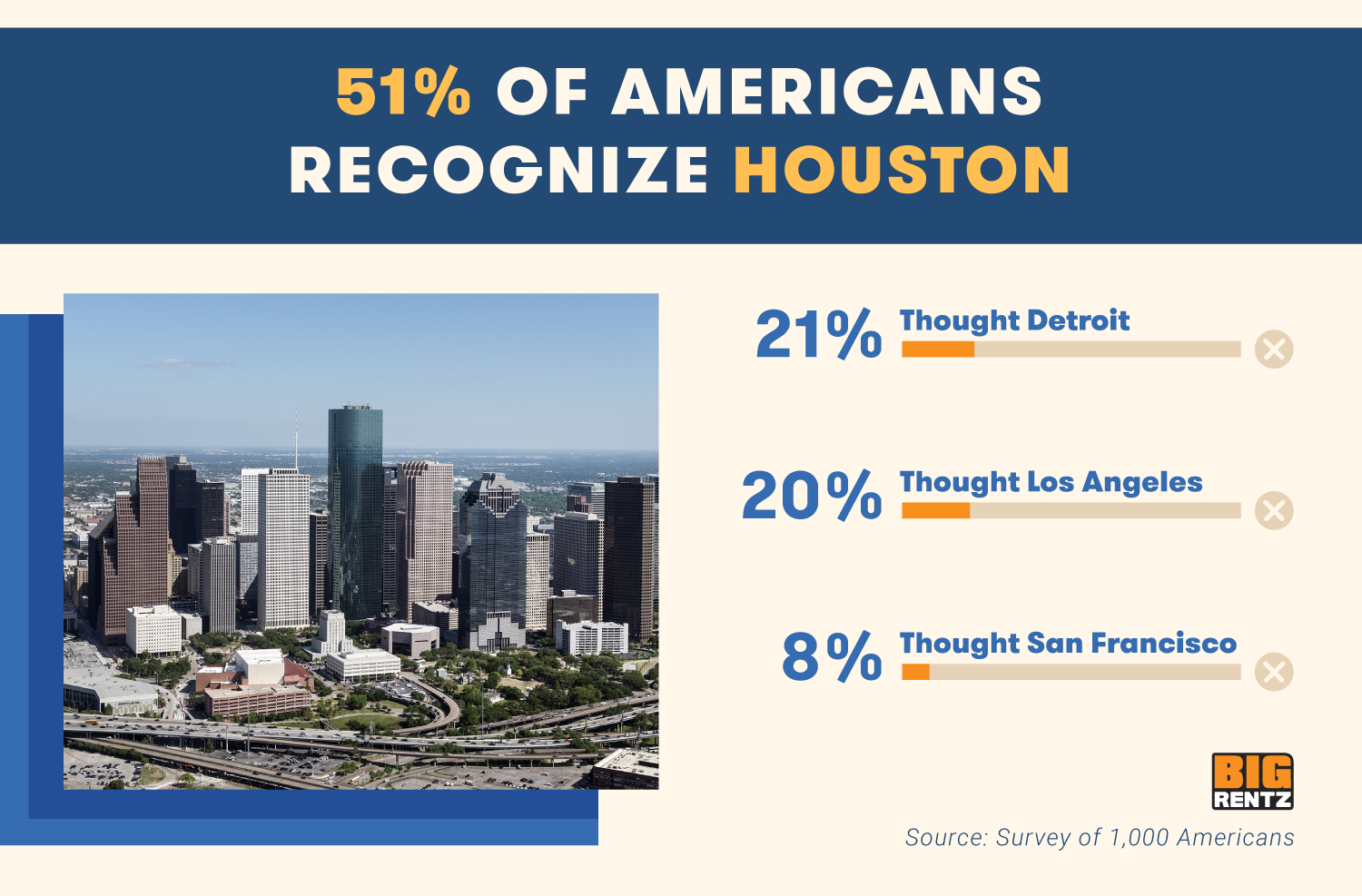 According to PlanGrid, Houston’s construction projects have grown. Over half of Americans were able correctly identify the Houston skyline. However, despite the city’s large construction market, a combined 41% of Americans thought the skyline belonged to either Detroit or Los Angeles.

Things get more interesting when we get into the demographics. While a majority of those living in Texas, Michigan, and California correctly the skyline as Houston, 26.7% of respondents living in Michigan and 29% of Californians thought the skyline belonged to the cities in their respective states.

A noteworthy thing we found is 45% of millennials in California selected Los Angeles as the skyline. This is a larger amount than any other age group we surveyed. 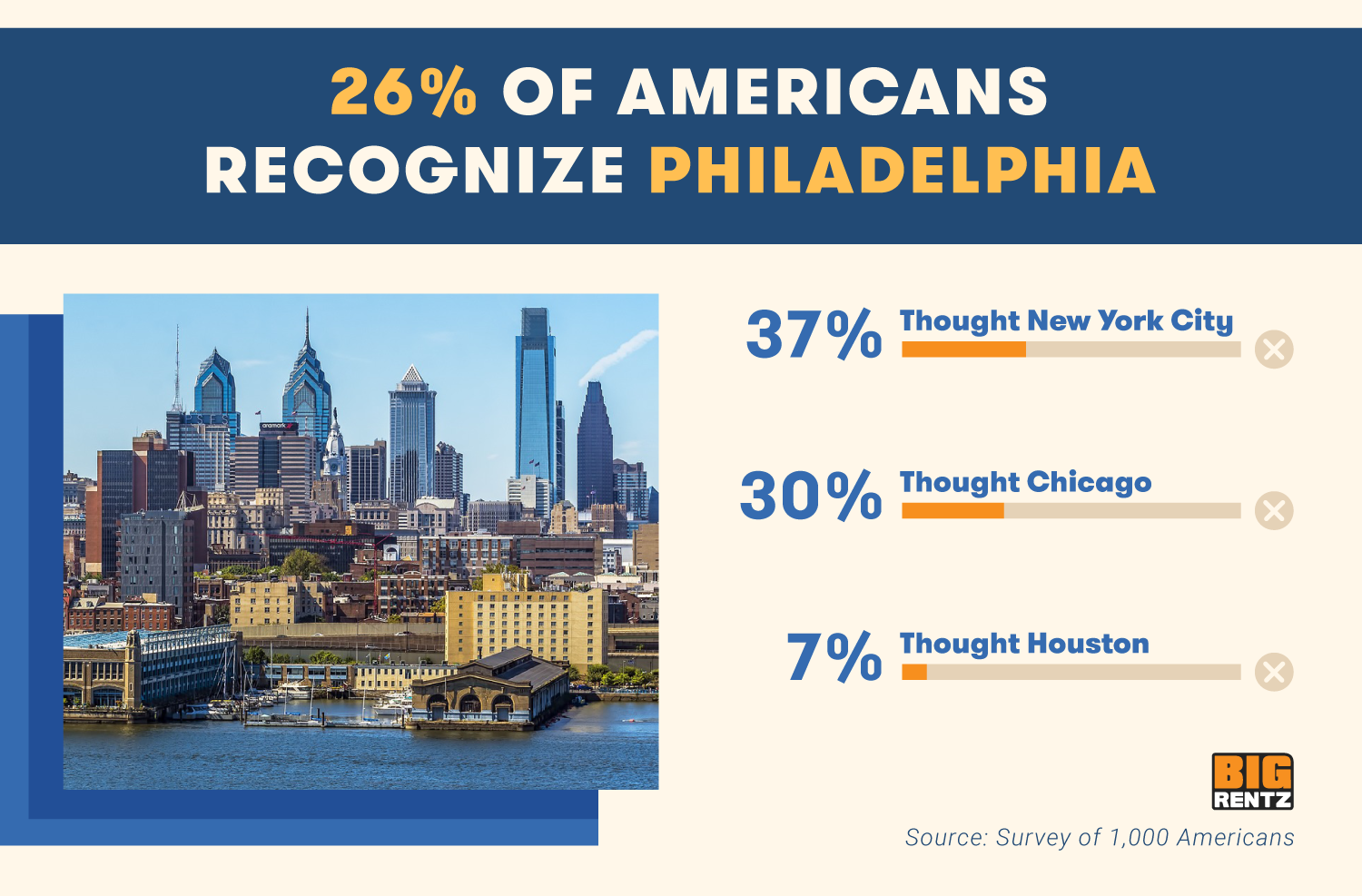 Philadelphia’s skyline has been undergoing an impressive transformation, with over 2.1 million square feet of new construction set to change its skyline in the coming years. This construction boom may be making an impact — a combined 67% of respondents thought our image of the Philadelphia skyline belonged to either New York City or Chicago, two cities famous for their dramatic architecture and iconic skylines. Only 26% of Americans correctly chose Philadelphia.

Interestingly enough, 35% of New Yorkers themselves misidentified the skyline as New York’s.

Although New York comprises 34% of the total U.S. skyline construction compared to Philadelphia’s 7%, Philly’s construction boom may it putting it in similar territory with the Big Apple. 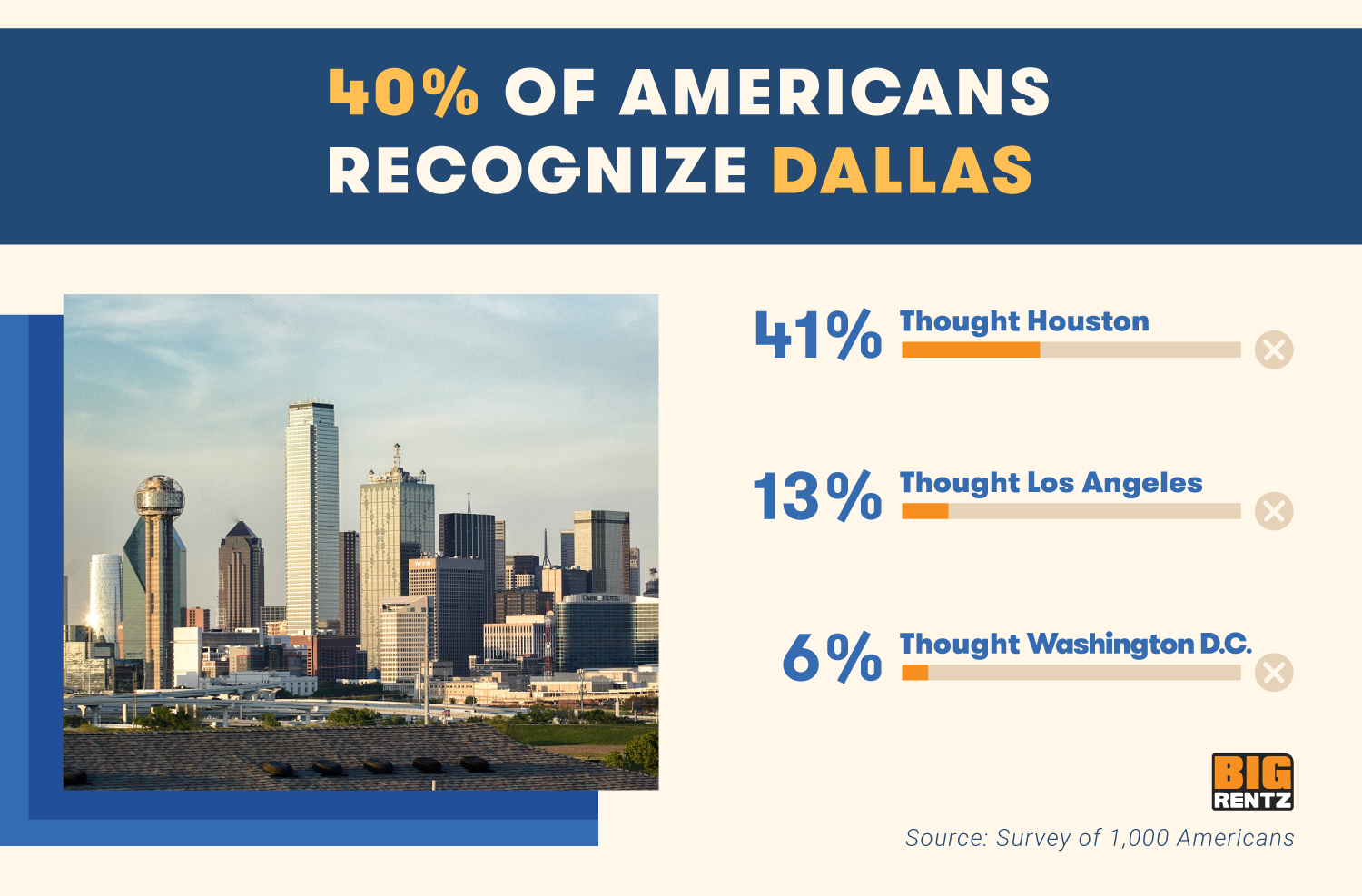 As mentioned, one-fifth of all construction in the U.S. occurs in just five metropolitan markets, two of which include Dallas and Houston. Encompassing structures such as the Reunion Building and the Bank of America Plaza, Dallas is poised to overtake Chicago’s population by 2030.

Although 40% of Americans correctly identified Dallas’ skyline, 41% mistook the Dallas skyline for Houston. Because the city is especially known for its night skyline, this suggests that Americans are less able to recognize skylines without lights.

Still, a combined 81% of Americans selected Texas city. This could be explained by the fact that Texas has the most construction growth of any other state as well as Dallas having more recognizable buildings. 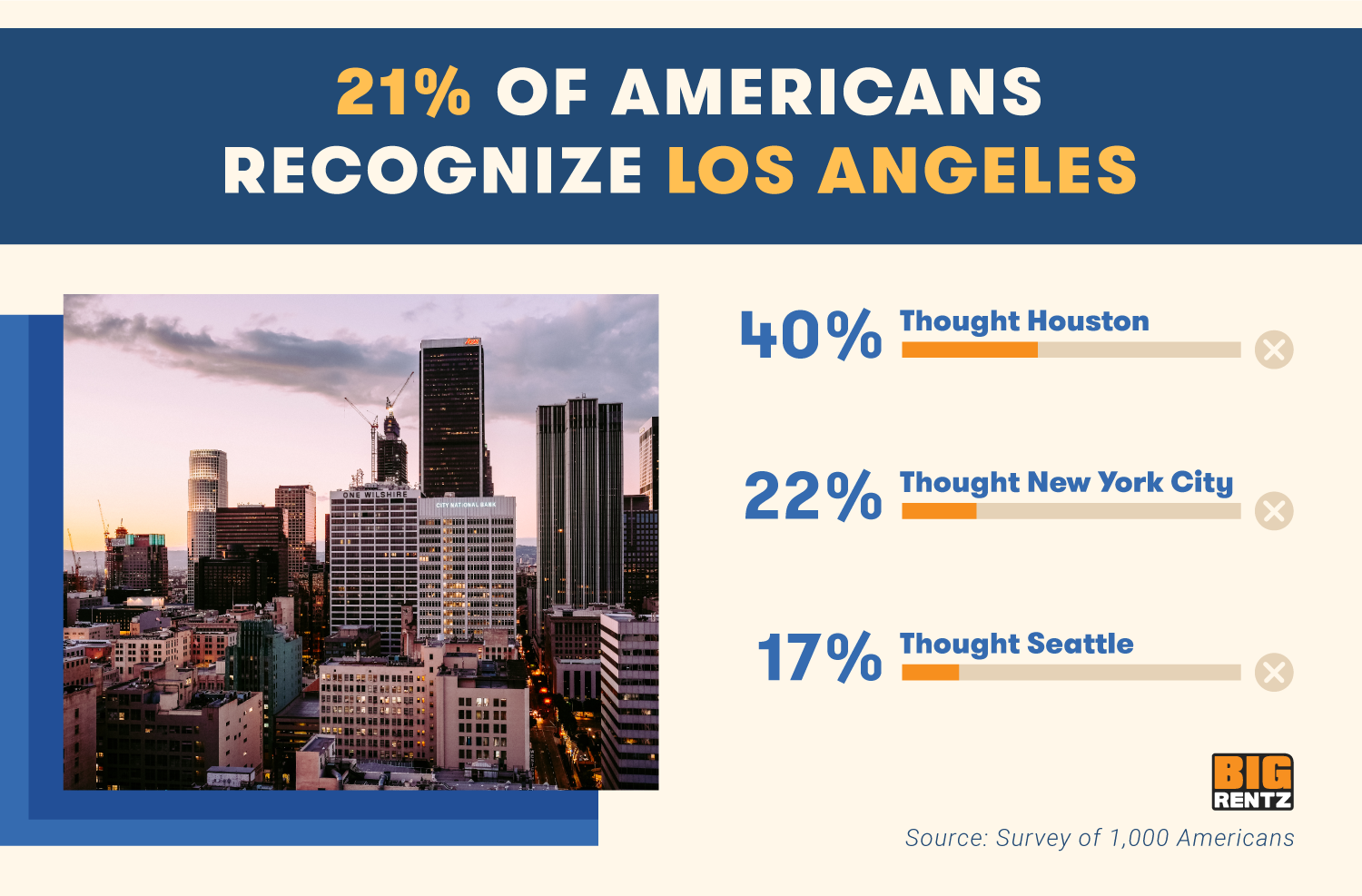 Since a number of participants picked Los Angeles in our Houston study, we also surveyed Americans to see if they could recognize the building outlines of Los Angeles, another city where construction activity frequently occurs. Only 21.1% of Americans correctly identified the Los Angeles skyline. Similar to the case with Dallas, almost 40% of Americans mistook the LA skyline for Houston. Interestingly, 22% of Americans thought the skyline belonged to New York.

This suggests that without indicators like palm trees and the San Gabriel mountains, people would not be able to identify the Los Angeles skyline based on its buildings alone.

Across the cities, we noticed some patterns in how participants identified the skylines.

Overall, millennials were better at recognizing city skylines than all other age groups, with the biggest discrepancy in the Los Angeles skyline. Of all those who guessed Los Angeles correctly, nearly 30% were millennials (ages 25-34). This suggests that millennials have a greater interest in the skylines of cities, especially since they are a generation known for traveling and moving to other cities for work.

In addition, many buildings featured in city skylines were often built in the the generations before millennials were born, allowing them to gain some recognition over the years.

When it comes to gender, there were no dramatic differences in how men and women recognized skylines. However, men can recognize city skylines better than women. In our Philadelphia survey for example, 33% of men recognized the Pennsylvania city compared to only 20% of women. In other cities like Los Angeles and Houston, the two groups essentially guessed the same.

When New York City was one of the options presented, we found that women are more likely to select the Big Apple as the skyline. In our study of Los Angeles, women comprised almost 64% of those who picked New York City. 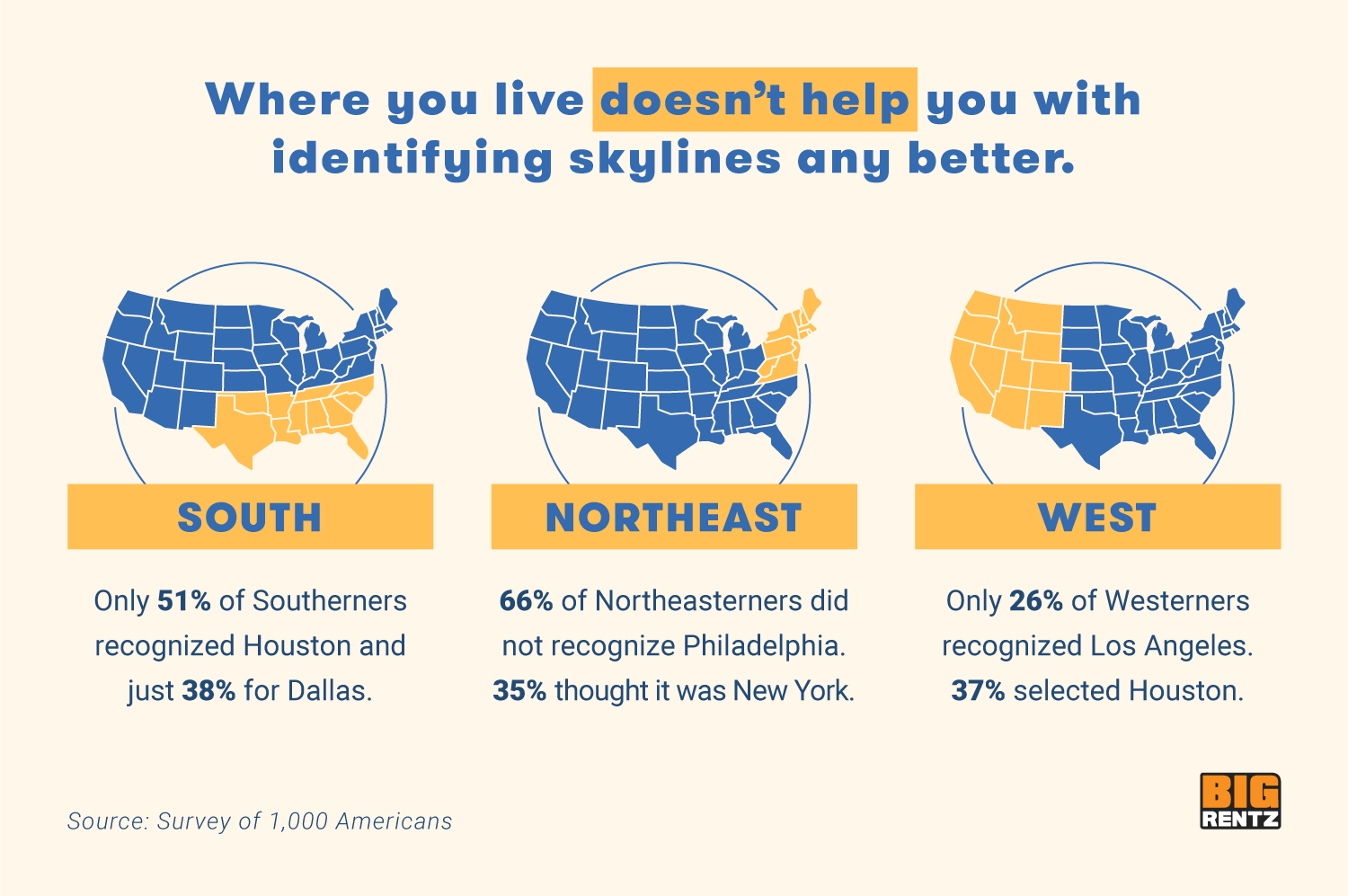 Do the locations of people help them with identifying skylines? Our survey showed that living in the same geographic region as a city doesn’t help you in recognizing skylines any better than someone living in another region. The most compelling finds were that only 26% of Westerners recognized Los Angeles, and 66% of those living in the Northeast failed to identify New York City, despite the cities being two of the country’s most famous metropolitan markets.

Summary
So, how well do Americans recognize skylines of growing construction markets? Our survey revealed that a significant amount of Americans can identify Houston’s skyline due to Texas’ project growth. However, a larger combined number of Americans cannot identify the buildings of major cities including Los Angeles and Philadelphia — instead attributing them to cities like New York City and Houston. This suggests that skylines without distinct and defining buildings and geographic features are less likely to be recognized.

As these cities continue to expand their economic power and increase their construction activity, they may want to think of ways they can make their skylines stand out, while increasing business, and creating more cultural impact.

9 Types of Backhoe Attachments
Teaching Construction With Minecraft
How To Use a Trencher: Types, Steps + FAQs
Construction Schedule Template (Free Download)
Transition to Adulthood: Home Modifications for Young Adults with Special Needs
What Is Included in a Subcontractor Agreement? [+ Template]
How to Design Your Exterior Store Experience
66 Must-Know Construction Statistics
The Complete Commercial Building Renovation Checklist
3 Bulldozer Sizes + How to Choose the Right One