How to Read Construction Blueprints If you’re going to build anything bigger than a breadbox, you’ll almost certainly need construction blueprints. It’s a sure thing you’ll need these technical drawings if you’re planning to build a new home. In fact, you can use blueprints to plan out everything from a house to an underground bunker.

The construction industry is built on blueprints, so to speak. Nearly every general contractor and construction professional sees them at some point during the building process. They’re even useful if you’re tearing something down: Demolition experts use blueprints to figure out which areas need to be blasted to bring a building down.

Blueprints are a type of construction drawings that show how a building is to be designed, what materials are to be used, and where features like doors, windows, sinks, and appliances will go.

Put simply: If you’re going to construct a building, you’ll need a set of blueprints. And whether you’re an architect, an engineer, or a construction worker, you’ll need to know how to read them.

These construction plans are also useful to keep on hand in case you need to want to make modifications later, or need to do maintenance/repair work. They’re also necessary to make sure the project has secured the correct building permits and complies with building codes.

Blueprint reading is an essential skill that workers in the architecture design and construction industry need every step of the way.

Blueprints are typically drawn on a 1/4 inch scale, which means that every quarter-inch on the plan equals 1 foot of actual length on the completed structure.

5 Key Features of a Blueprint 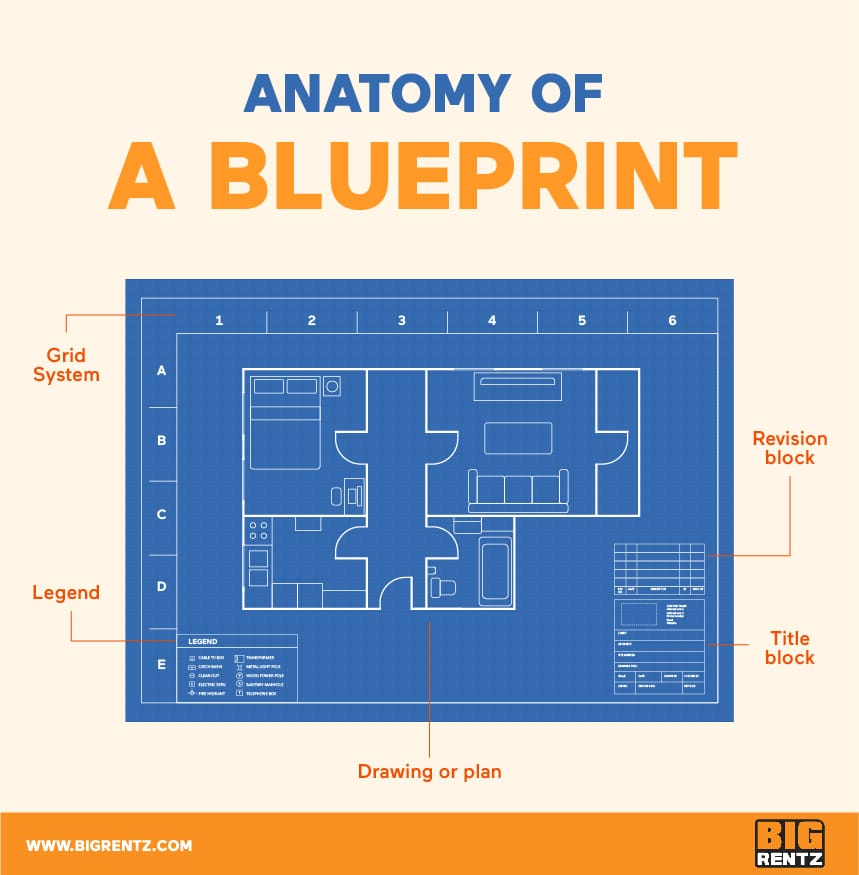 Just as the general building industry uses a glossary of construction terms you need to know before embarking on a project, reading a blueprint also requires you to become familiar with numerous terms and symbols.

Blueprints can be larger or smaller depending on the scope and complexity of a project. The most common sizes of blueprints for the construction of a new home are 18×24 inches or 24×36 inches. In addition to the central drawing, each sheet of a blueprint usually includes the following features. 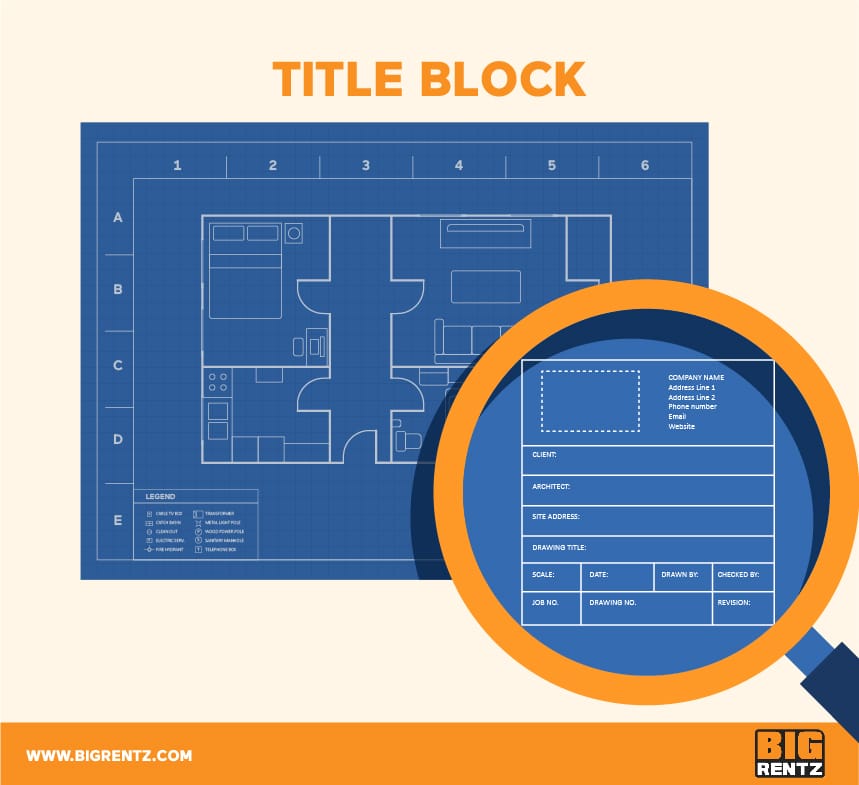 The title block may be a rectangle that occupies a corner of the drawing or a narrow band that spans the length or width of the sheet. In either format, the title block contains useful baseline information about the project.

Title blocks are often found at the bottom right corner of the drawing frame. Also in the lower right is the drawing or print number, which is important for filing the blueprint and finding the right drawing when it’s mentioned on another blueprint. 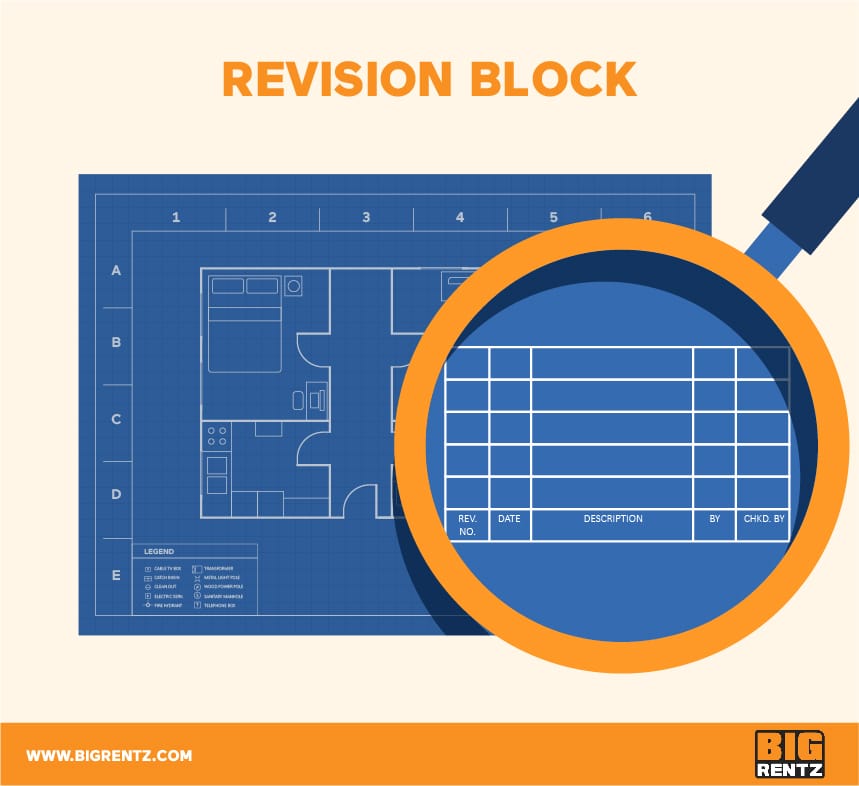 A revision block lists any changes made to the drawing with the date, description of the change, and name or initials of the person making or authorizing the change. Revision blocks are included for various parts of the plan.

When blueprints are first drawn, the revision block is empty, awaiting revisions to component parts. These are entered as changes are made and “as-built” drawings accumulate accordingly.

Interesting fact: Letters and numbers are both used in revision blocks, but the letters I, O, Q, S, X, and Z are avoided because they can be mistaken for numerals. 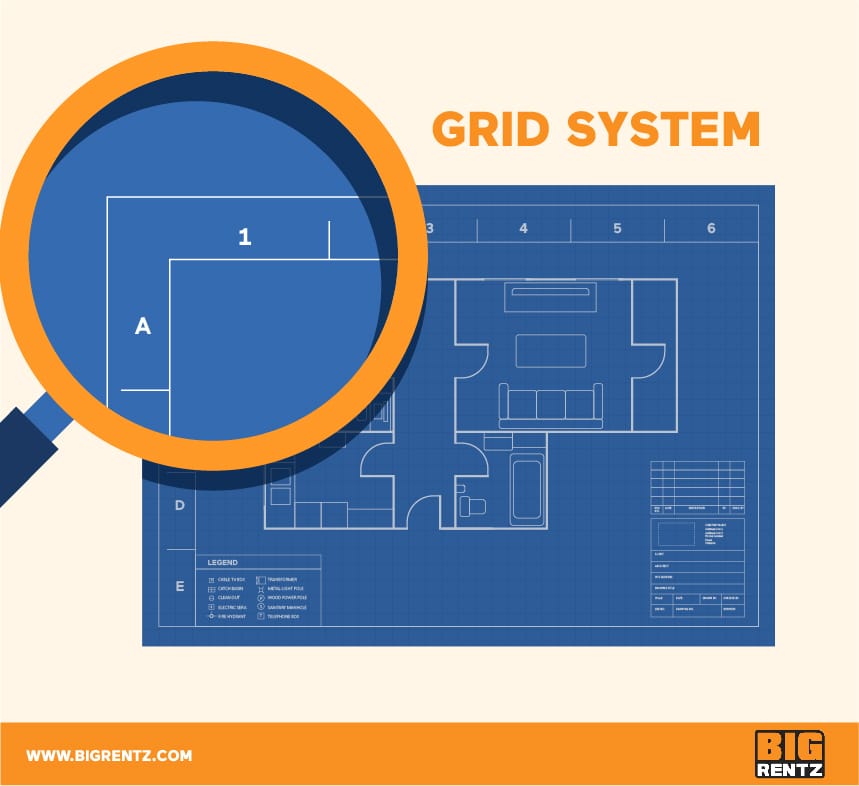 Like a map, blueprint sheets often include a grid system along the horizontal and vertical edges, with numbers on one axis and letters on the other. This makes it easy to reference a particular spot on the drawing. 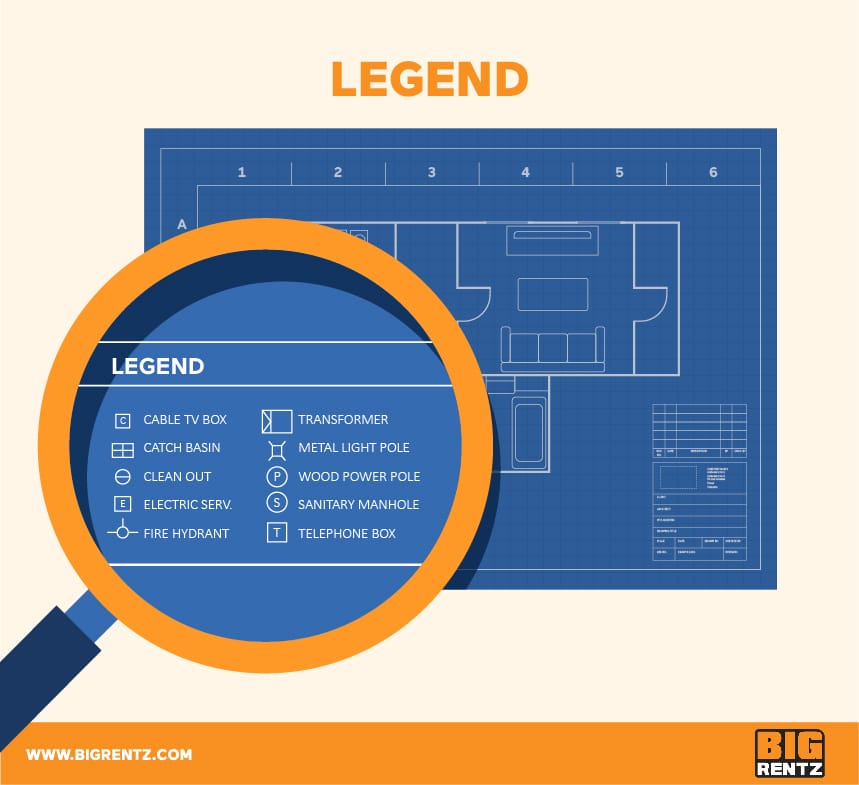 Symbols, abbreviations, notes, and other practical information relevant to each particular drawing often appear at the bottom or on the side of a floorplan. This is the key to decoding the shorthand of symbols in drawings.

An architect’s plan may provide various notes in a project, including general notes that cover the entire project; notes applying to a particular design discipline; or notes that only apply to the sheet where they appear.

A legend is critical because it’s easy to get confused reading blueprints, especially if different architects or engineers produce them. Symbols that look similar don’t always mean the same thing to construction workers in different fields or specialties.

Besides, although there are standard symbols for specific types of projects, some architects and construction firms use custom symbols that you won’t find anywhere else. The legend makes these easy to understand.

A few examples of typical plan symbols include:

The main area filling the center of each blueprint sheet is devoted to the drawing or plan, illustrating a particular view, feature, or system of the project.

Types of Sheets in a Blueprint Set

Most buildings are built by a combination of professionals, each with a specific area of expertise — foundation, framing, mechanical, electrical, plumbing, roofing, etc. To coordinate how all these features should work together, each set of blueprints contains specialized drawings called “sheets.” 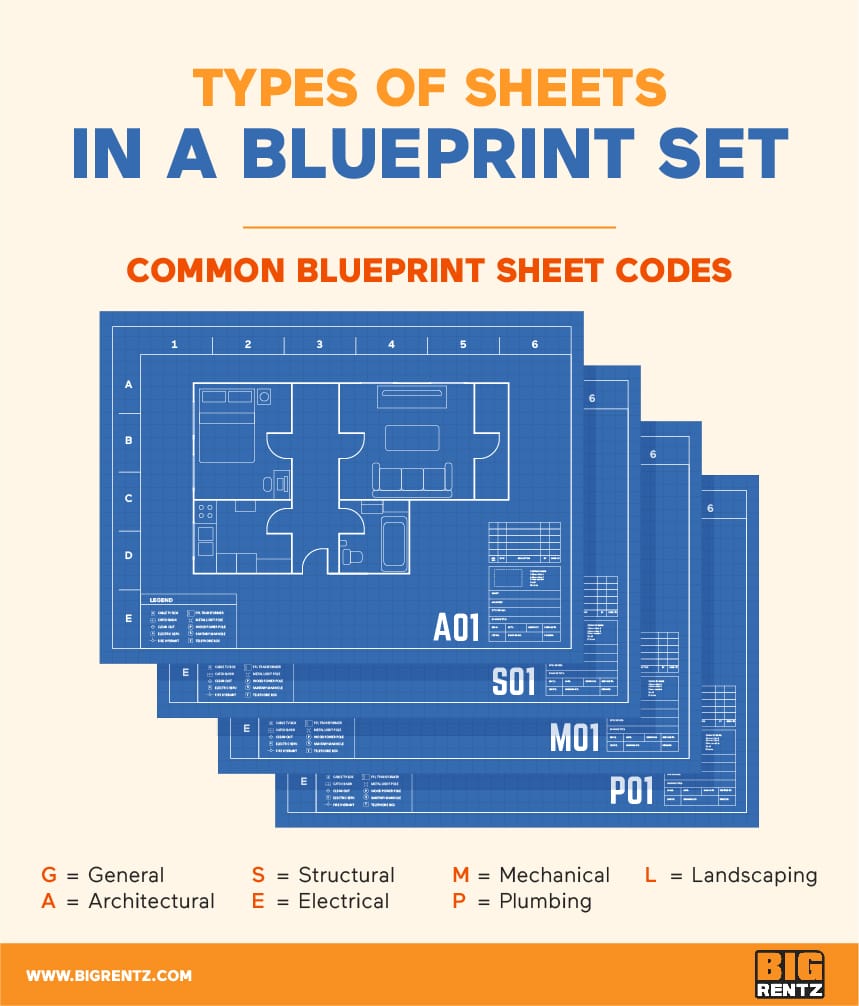 Each sheet is classified with its own letter code to help different contractors easily find the information they need. Sheets are typically organized in a blueprint set from the most general to the most detailed. Some common types of sheets and their designations include:

Each sheet has its own numbering convention that represents three elements: The discipline designator determines the first letter (or two) in the sequence (A for architectural, G for general, etc.).

Next, a numeral represents the sheet type (0 for general info, 1 for plans, 2 for elevations, and so on). The final numerals signify where the sheet number falls in the entire sequence.

Blueprints will often show a project from many different angles. These might include not just a floor plan, but also pages showing the project from the following perspectives: 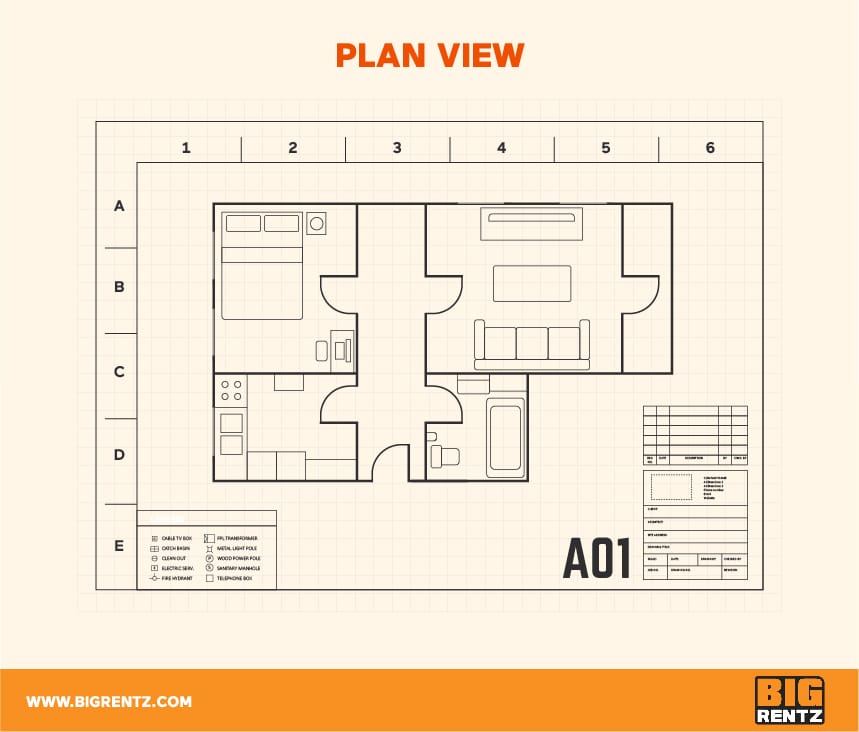 The plan view is a bird’s-eye view of a structure from above. It’s probably the most recognizable form of blueprint to most people: a two-dimensional or “flat” view drawn as if the walls were cut in half on the horizontal plane. Each floor of a building gets its own plan view drawing. 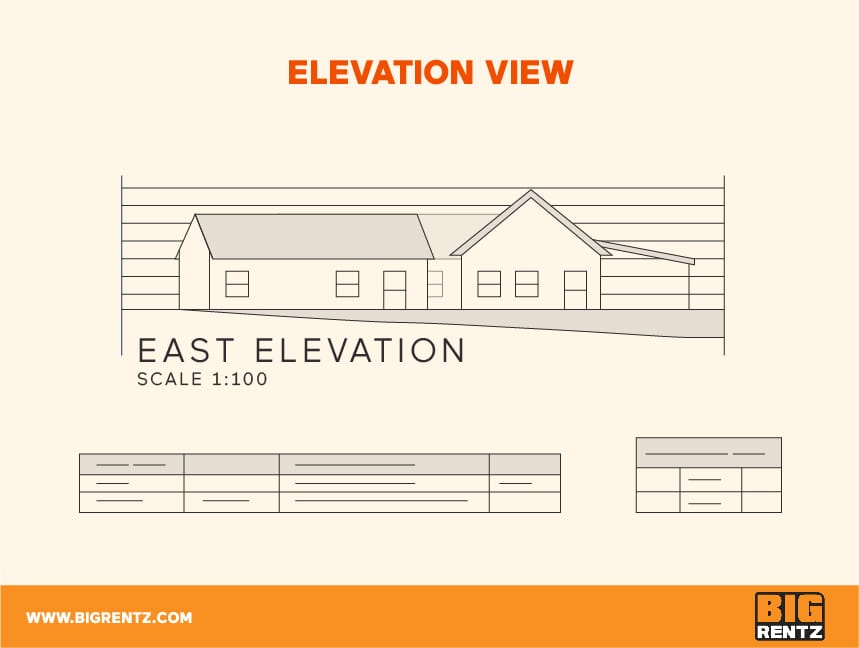 Elevation drawings show how a building will look from the front, rear, left, and right sides. They can show interior elevation or exterior elevation views. They’re drawn on a vertical plane, depicting one side of a building the way it would look if you were standing and looking directly at it.

Colorful, detailed artist’s renderings of an elevation view are often displayed in model-home offices to show how different tract-home designs will look when they’re finished. They’re also often supplied to media outlets to give the public an idea of what public buildings like shopping centers and university buildings will look like. 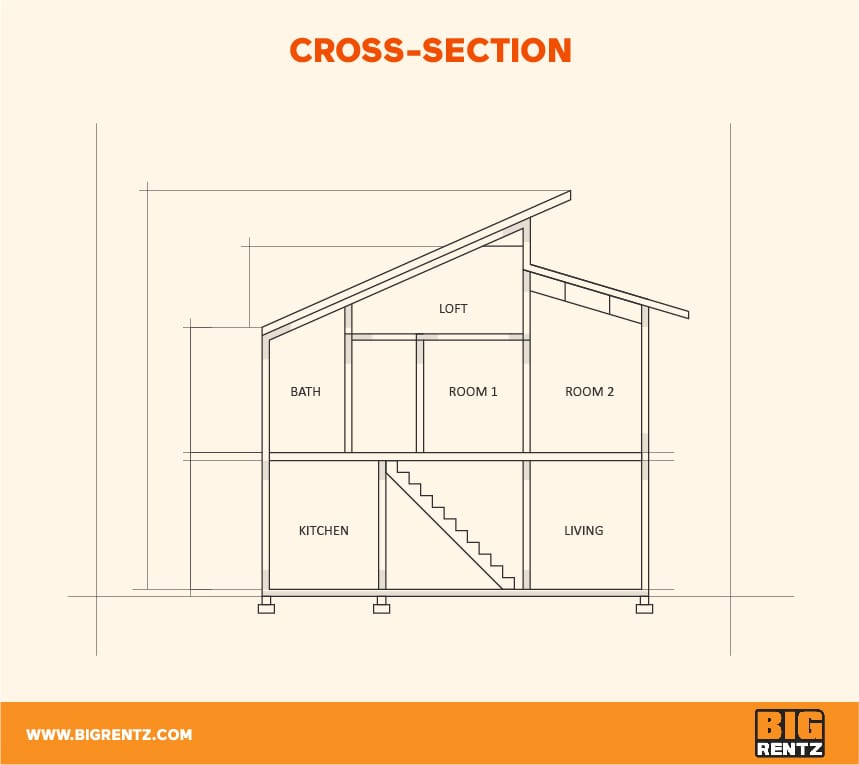 This is a drawing of the completed building as if it were sliced in half vertically. It helps the viewer understand the relation between floor heights, rafter lengths, stairway designs, and other structural elements. Note how, in the example, the stairs appear as they would from the side, similar to a sawtooth.

Cross-section drawings are often used for a building’s framing plan, to show how beams, girders, columns, and joists fit together. These are elements you won’t see once the walls are finished, with drywall and ceilings installed. 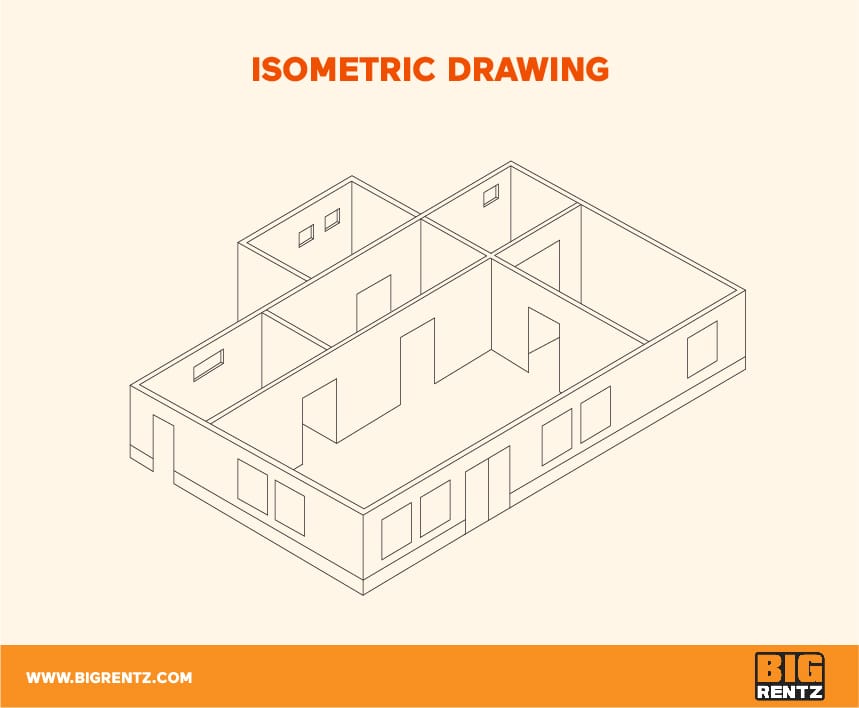 An isometric drawing is a three-dimensional representation in which the lines are drawn at 30-degree angles. This gives the impression that you’re looking down on the interior from one corner of the building. It can reveal internal features such as plumbing connections, machine assembly, room design, or more.

The word “isometric” stems from a Greek term meaning “equal measure.” The method isn’t just used for architecture; it’s also been used to create infographics in media. And artists have used the technique to create illusions in famous illustrations, such as those by M.C. Escher, in which staircases appear to begin and end on the same level.

8 Types of Blueprint Lines and What They Mean

A quick way to begin understanding blueprints is to get familiar with its lines. Lines represent walls, door frames, appliance exteriors, dimensions, ranges of motion, etc.

Depending on their thickness, whether they are straight or curved, dashed or solid, lines signify different schematic purposes in a drawing. These are some of the most common lines you’ll encounter on a blueprint and their uses.

Object lines show the outer surfaces of objects that would normally be visible in a finished building. They’re the thickest and most common lines on a blueprint.

Hidden lines represent surfaces that would not be visible in a finished building because they’re on the far side of a wall, appliance, or other object. Also known as “hidden object lines,” these are typically used with isometric drawings.

Dimension lines are arrow-headed lines that indicate distance, from the measurements of walls to the spaces between wires in an electrical outlet, etc.

Phantom lines show different possible positions of a movable object. They can describe the “on” and “off” positions of a switch, the range of a door when it opens, and so forth.

Leader lines, simply put, are “arrows” that point to features of a drawing that need more explanation. In general, they’re drawn at 45-degree angles to the feature they’re describing.

Break lines are used to save space by shortening the drawing size. Depending on their length, they can look like wavy or sharp zig-zags. Either way, they indicate that a section has been removed.

When reading blueprints, start with the title block to familiarize yourself with the basics, then study the legend. You’ll need to refer back to it repeatedly during the project, but committing key symbols to memory at the outset will give you a good head start.

You’ll want to be clear on which elements of a project come first in the process. You don’t want to get ahead of yourself and have the drywall up before you lay in the electrical wiring. Those are the kinds of mistakes that can make a project late and over budget.

It’s also important to know who you’re dealing with, from architects to engineers, electricians to carpenters, to make sure everyone’s on the same page.

Blueprints aren’t blue anymore … but they used to be

Blueprints were created by British scientist Sir John Herschel in 1842. He soaked thin paper in a chemical called cyanotype, attached it to white paper, and exposed it to light. The “Prussian Blue” shade seeped through, leaving white lines on the blue background.

The method remained in use until the mid-20th century. Most architects don’t draw blueprints by hand anymore. Instead, they use software to create blueprints digitally. But the name “blueprint” stuck, even centuries after the prints weren’t blue anymore.

Blueprints come first, before any work is done on a building project. They’re the foundational element of any construction project. They provide a picture of how a project is expected to look upon completion, plus a detailed road map for how to get there.

Whether you’re talking about property grading, structural layout, plumbing, electrical, or carpentry, you’ll need to provide specifics for how everything will fit together. Blueprints give you a way to do that. With their help, you can create a home or other building project to be proud of — and one that will stand the test of time.

What Americans Are Building According to Google
Sensory-Friendly Home Modifications for Autism and Sensory Processing Disorder
What is Asphalt Milling and When Should You Use It?
How To Use a Trencher: Types, Steps + FAQs
Types of Foundations in Construction Projects
Video: Six Figures, No Suits Episode 3 – Shoring – Mirvish Village
Excavator Bucket Size Chart: How To Choose the Right Type
How to Choose the Right Telescopic Boom Lift Height
Common Forklift Rental Prices For Your Next Project
Why You Should Dig a Trench Using a Rototiller