Can Americans Do Simple Household Maintenance Tasks Without Google? You know those stories older relatives never forget to tell, about how “back in their day” life was harder and it made them tougher (or, as they phrased it, “built character”)? Well, looks like they may have been right.

According to Google data on what Americans are building at home, the most popular projects being searched for in America are for decks, houses, and sheds. But while that might make Americans sound overall like a society of capable DIY doers, when it comes to basic home maintenance, many are completely clueless.

In fact, our research concluded that a full 38 percent of America is unable to fix common household maintenance issues (without the internet, that is).

Here’s what we found when we asked 1,000 Americans if they would be able to perform simple home maintenance tasks without Google’s help: 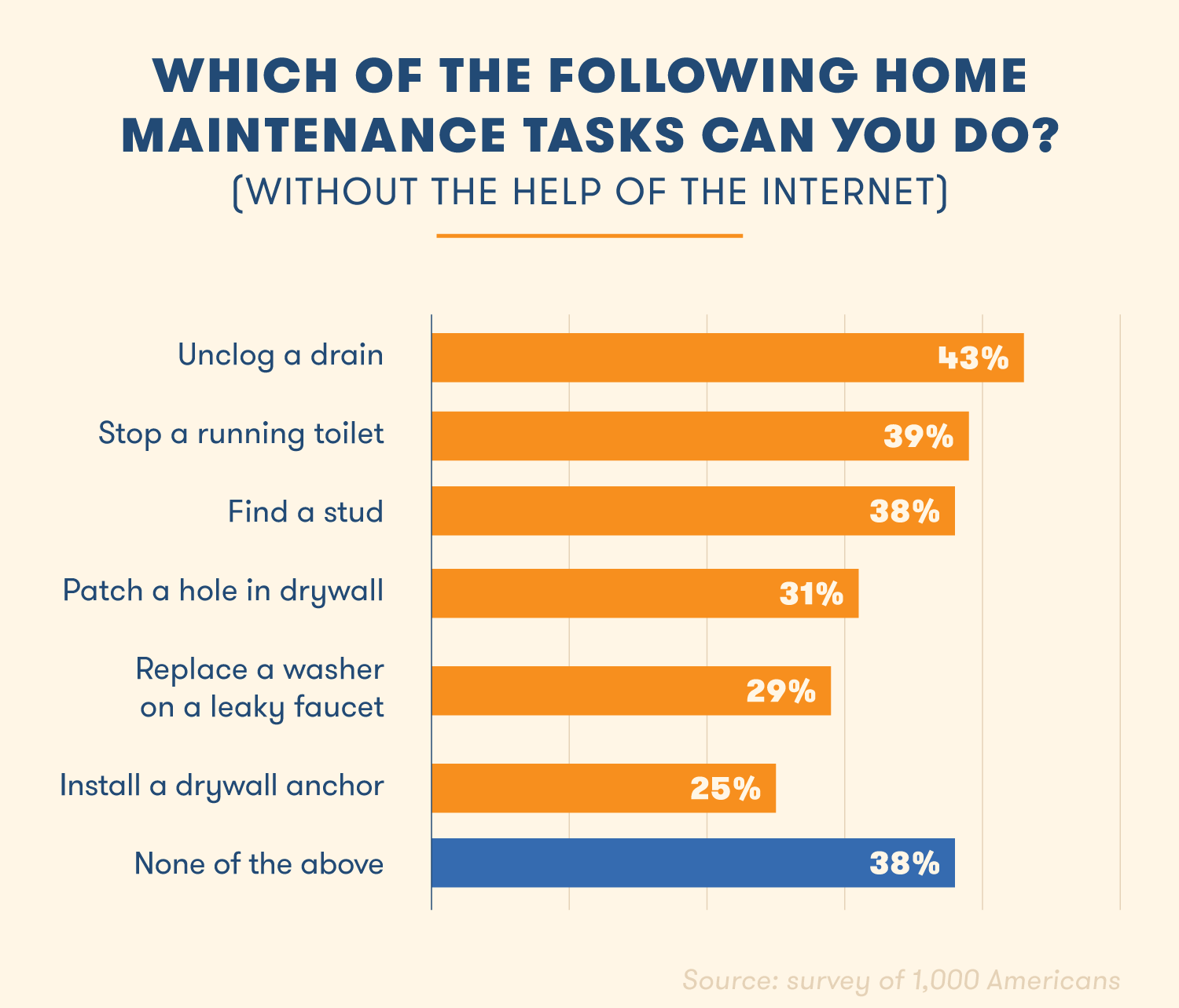 Here’s a breakdown of our key findings:

It’s no secret that the human race is becoming increasingly dependent on the internet. With new apps coming out at a record pace, the resources one can find online are virtually limitless. Is this doing more harm than good, though?

Traditionalists would say it is, and they may be right. The results of our survey showed that 38 percent of Americans responded that they are unable to perform any of the basic repairs on our list.

You can see the list below, but it really begs the question: is the “American handyman” a thing of the past? 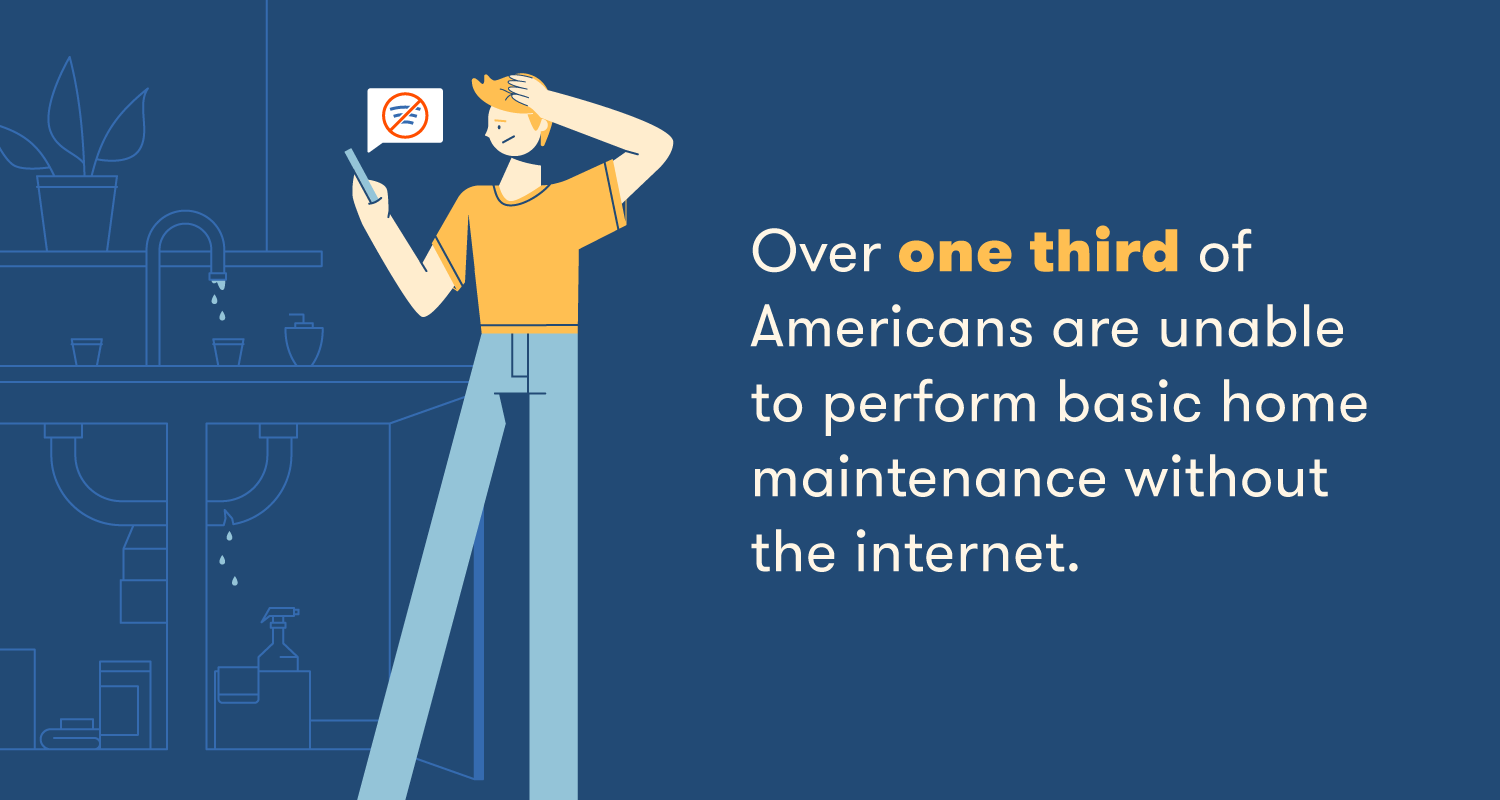 When you dig into the results a bit more, the task that most Americans are comfortable doing (43 percent) is unclogging a drain. However, the disheartening flipside of this statistic is that more than half of the nation doesn’t know how to perform what appears to be the easiest task on the list.

The hardest task appears to be installing a drywall anchor, which 25 percent of respondents are capable of doing.

What Are People Searching For?

We dug into the search data provided by research platform Ahrefs for a closer look at how often users search for home maintenance help on the web. Below you can see how many searches each of these tasks receives each month: 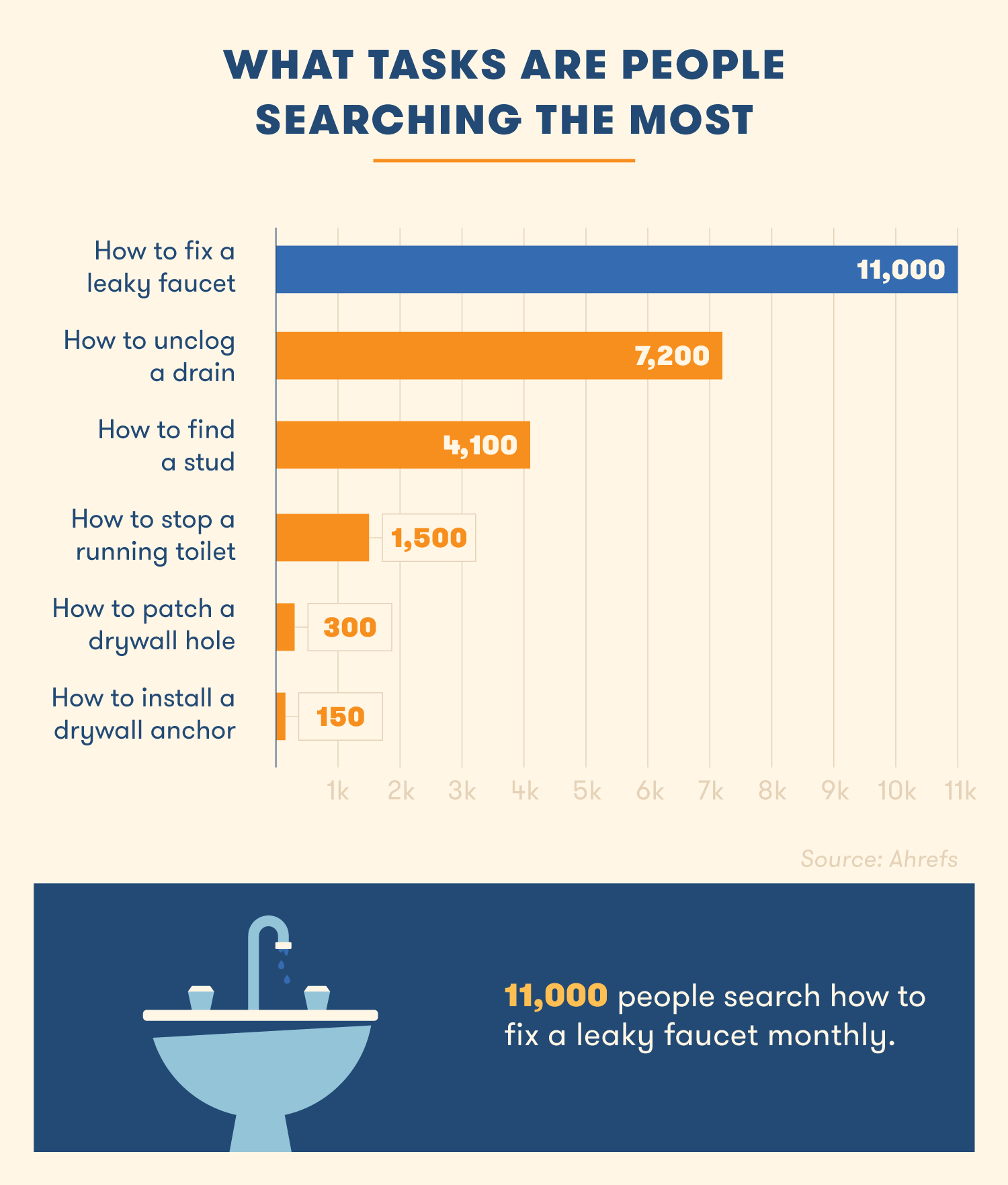 Given that our research shows only 1 in 4 people know how to install a drywall anchor on their own, the low number of searches suggests that, when it comes to projects that involve drywall, most people are willing to hire out.

Our survey results showed that those 45 and older are able to perform these repairs without the internet much more confidently than younger age groups. By contrast, nearly half of 18-24 year-olds said they’re unable to do any of the tasks listed.

Here’s a breakdown of respondents’ answers according to age: 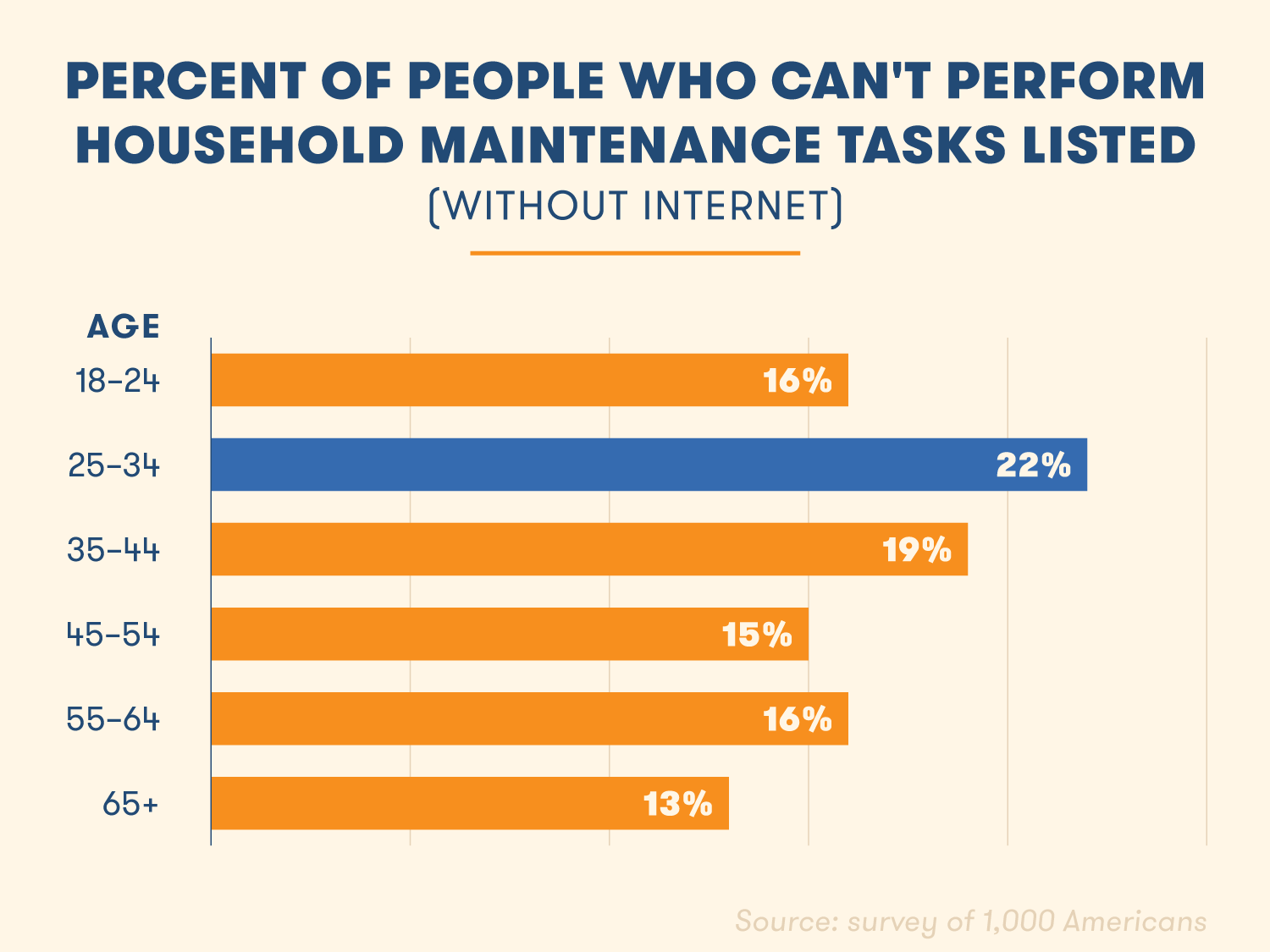 More than half of female respondents (56 percent) said they were unable to perform any of the listed tasks without the internet, compared to just 44 percent of male respondents.

If we drill down to look at the gender gap of each individual task listed, we see that this trend of male confidence is consistent throughout. For each task, there is at least a 15 to 20 percent difference between male and female respondents. 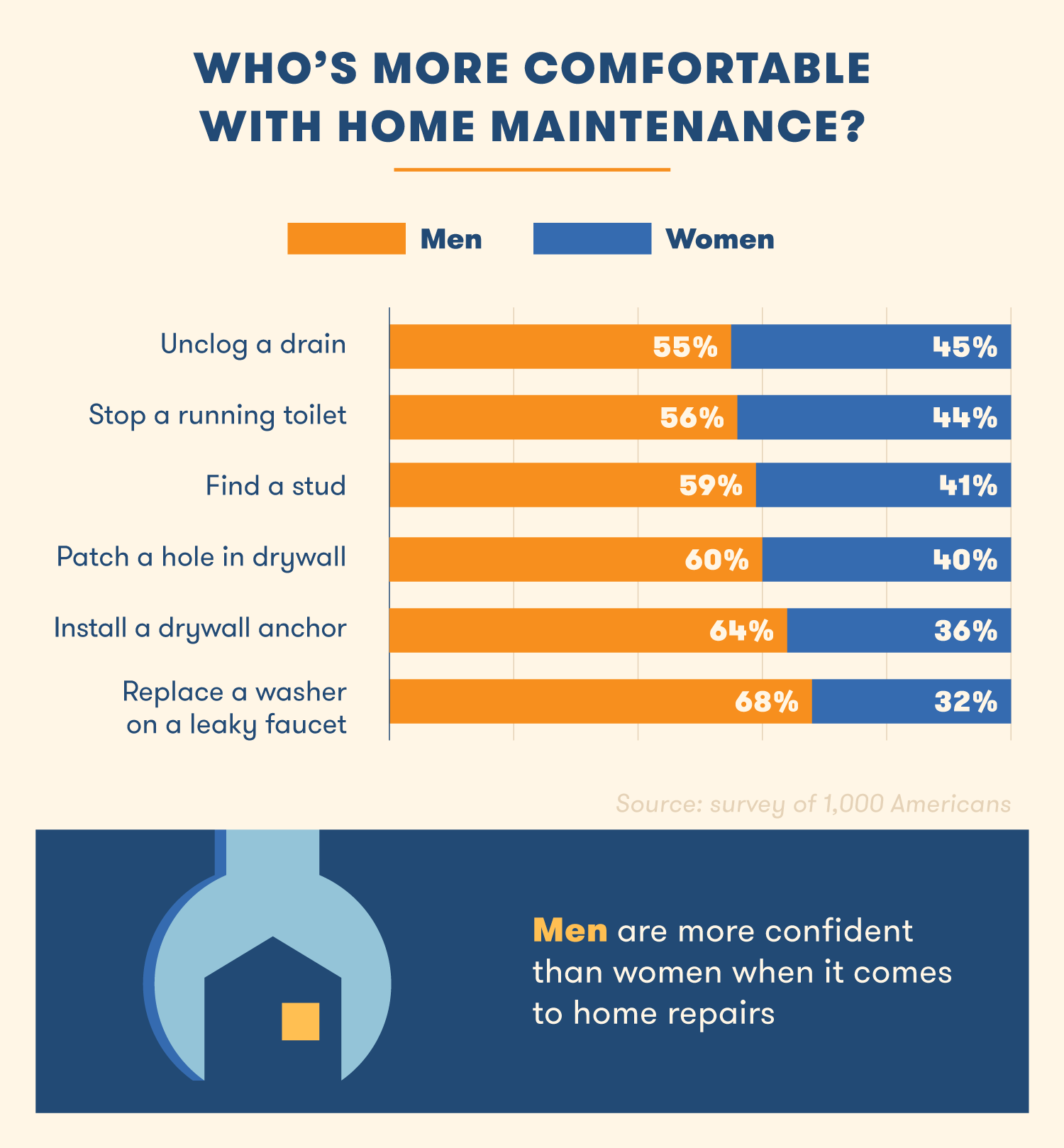 The Difference Between Small Tasks and Large Ones

Anyone who’s ever performed home maintenance knows that seemingly small repairs can easily turn into hours of work. And if a DIY job spirals out of control, it can also become expensive — in 2018, homeowners spent an average of $10,000 on home maintenance jobs.

There are definitely some household projects that are better left to the professionals. But since contractors can be costly, it’s a good idea to at least nail down the easy stuff on your own. Things like patching a hole, tightening a faucet, or finding a stud are easy to learn in your free time — that way, when there’s an actual problem, you’ll feel cool and collected as you apply your well-practiced skills.

With all the cash you save handling small issues independently, you’ll have plenty of budget to bring in the big guns on projects like roofing, home expansion, and other large tasks that come with extra safety concerns and require advanced skills. Making sure to hire people who have access to the right equipment — and know how to properly use it — will ensure a quality build and long-lasting integrity on your project.

We also recently did a survey to learn what Americans built during the 2020 pandemic. Although many Americans rely on the internet to get home repair done, we found that there were many who tackled home improvement projects to pass the time while sheltering in place. Check out the results of that data study to learn more.

This study was conducted using Google Surveys. The sample consists of no less than 1,000 completed answers. Post-stratification weighting has been applied to ensure an accurate and reliable representation of the total U.S. population ages 18 and older. The survey ran online in July 2019.

10 Longest Tunnels in the World
What is Construction Management?
20 Essential Construction Podcasts to Listen to in 2022
Women in STEM Statistics to Inspire Future Leaders
What Is a Construction Foreman?
How Are Skyscrapers Built
Why Renting Construction Equipment Beats Buying
CAT Excavator Size Guide
The 10 Best Construction Jobs For Your Career
Cultivator vs. Tiller: Which Tool Do You Need?