What Is America Building When Stuck at Home According to Google

The recent state of the world pushed many Americans to spend most of their time at home. Since family visits to the park and all-day shopping trips were out of the question, many Americans turned to DIY projects to fill in their time.

Unsurprisingly, home improvement stores saw a rise in customers. Lowe’s reported an 11.2 percent same-store sales surge in the first quarter of 2020 and Home Depot reported a 6.4 percent increase. Many local news outlets also reported a growing interest in home improvement projects in all parts of the country from Travis County, Texas to Louisville, Kentucky.

To find out, we used SEO analysis tool Ahrefs to identify the top “how to build” Google searches and analyzed their popularity on Google Trends between March 1, 2020 and June 1, 2020 to see which states were most interested in these top building projects.

What Did Americans Build?

To start, we looked at the top “how to build” searches with the highest average number of searches per month. Then, we ran each of these through Google Trends to find the state that searched for these projects the most.

Fences and Sheds Were Top Projects For Most States

We also wanted to see what the most popular projects were for each state. We used Google Trends to dive into each state’s top home DIY project. We omitted three popular searches, “how to build a deck,” “how to build a house” and “how to build a wall” since their high popularity made them outliers and skewed our overall data.

We learned that the majority of the country was split between building a fence or a shed. Western and central states mostly preferred fences while eastern states mostly preferred sheds. Looking closer at the data, we can see that interest in building a shed increased by 14.8 percent over time between March and June. This is a 5.28 percent increase from the previous three month period between November and February.

There were also a few states who preferred other projects or had two top projects:

– Utah and Vermont were tied for fence and shed

– Ohio was tied for fence and steps

– Kentucky’s top project was a table

– Mississippi’s top project was a porch 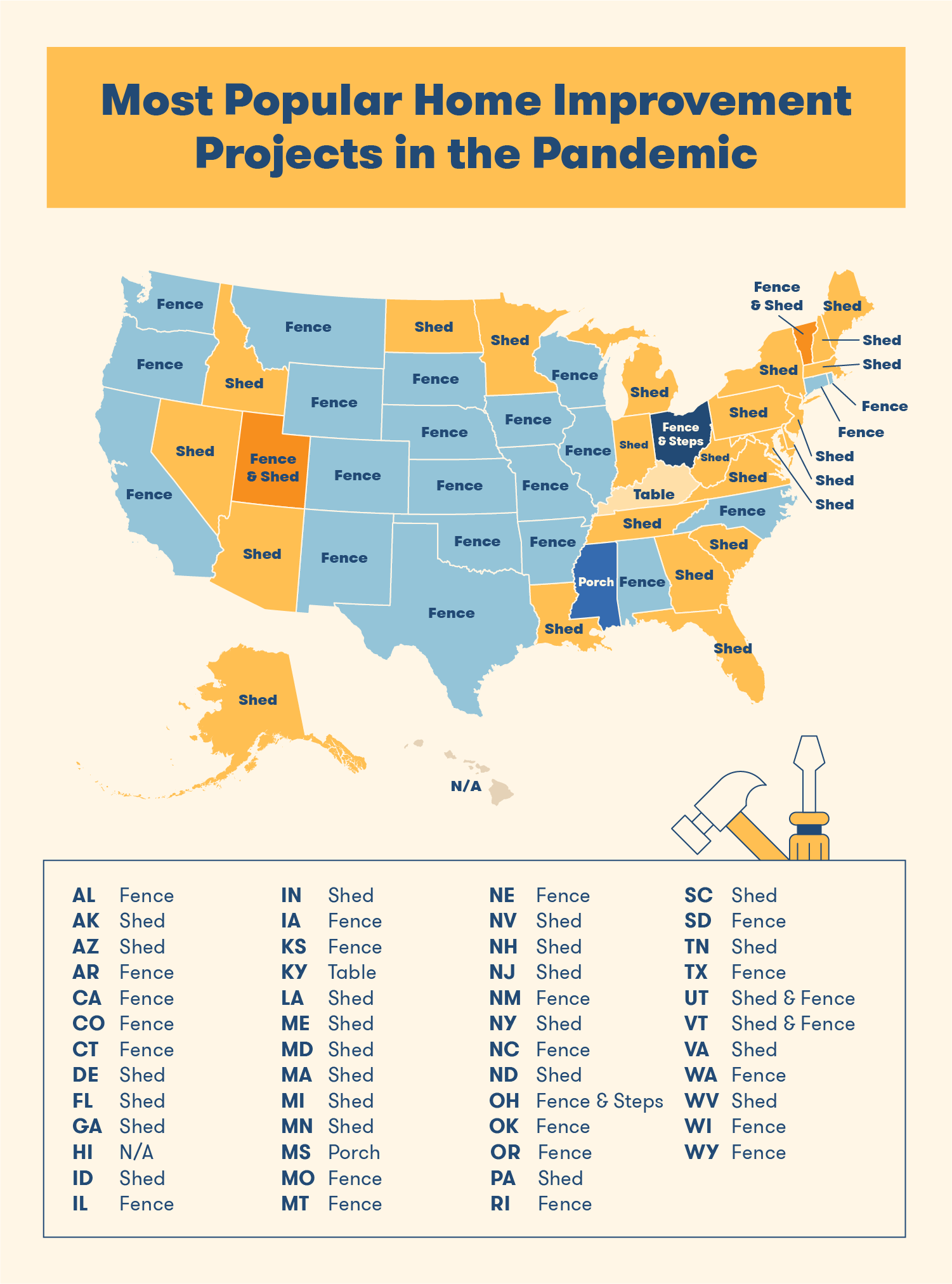 Most Interesting Projects During the Pandemic

In addition to home improvement projects, we saw that Americans were interested in building many other things at home. Some of the popular non-home improvement DIYs included PCs, boats and go karts. 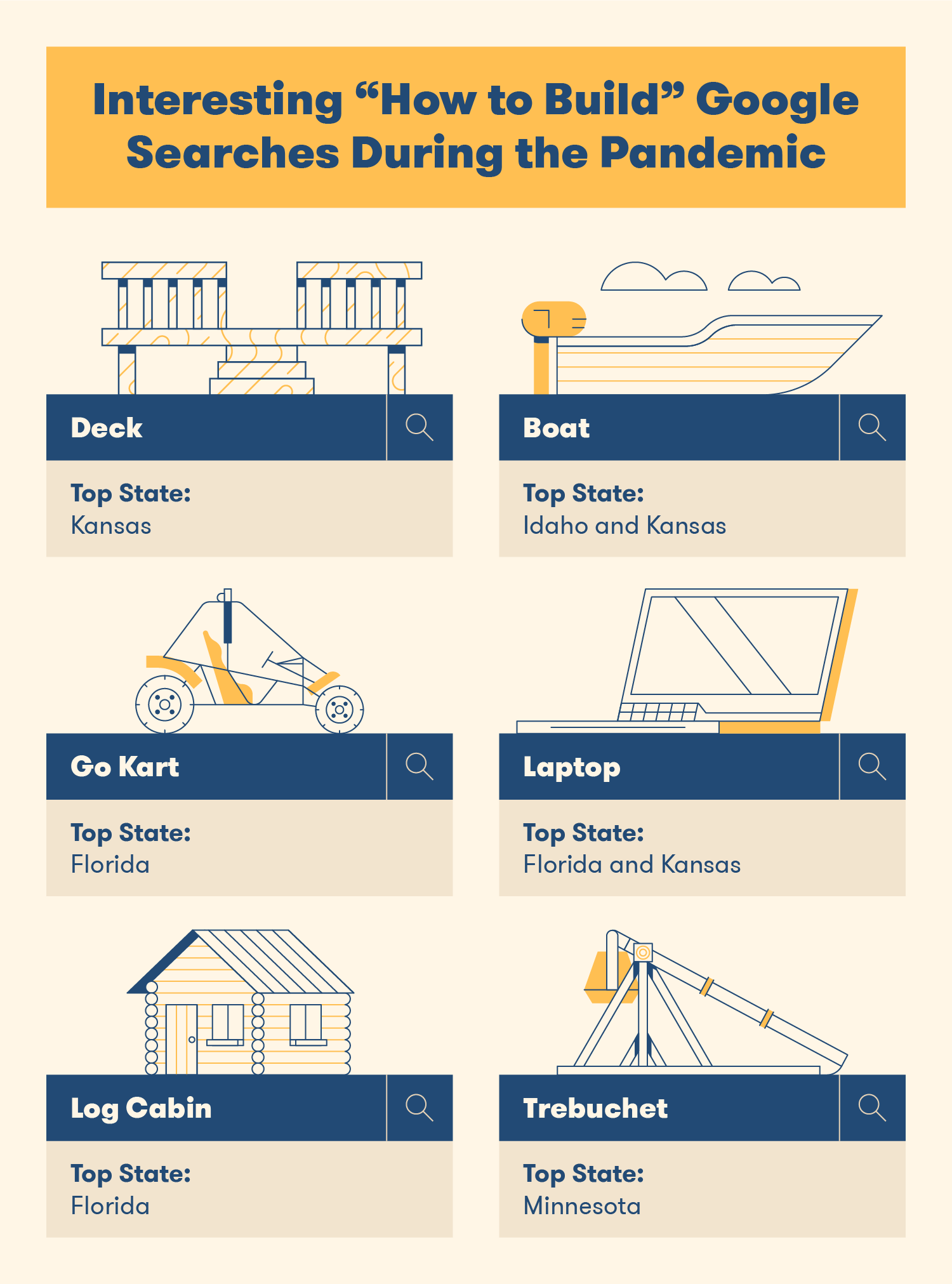 Seeing what Americans built gives us one glimpse into how we chose to occupy ourselves at home. Many Americans might have gone this route as a way to stay busy and spend time in the fresh air. For others, it may have been the opportunity to finally tackle DIY projects they’ve put off.

What is Asphalt Milling and When Should You Use It?
What Is Trenching?
10 Longest Tunnels in the World
The Oldest Buildings in America
Easy-to-Use Construction Bid Template (Free Downloadable)
States Where the Most Home Development is Happening
What Is Included in a Subcontractor Agreement? [+ Template]
The World’s Most Innovative Mega Construction Projects
Plaster vs. Drywall: Dissecting the Differences
How to Build an Epic Ninja-Style Obstacle Course in Your Backyard