Illegal Dumping Facts and the Consequences of Carelessness Illegal dumping — also known as “fly-tipping” — has been a problem for both cities and rural areas for decades. Americans alone dump roughly 1.5 million tons of illegal waste each year, and the problem has only gotten worse during the pandemic.

To learn more about illegal dumping and its impacts, read through our list of 15 illegal dumping facts or jump to the infographic below for tips on preventing it in your community.

What Is Illegal Dumping?

Illegal dumping involves creating waste at one location and disposing of it where trash disposal is unauthorized. Illegal dumping may happen when someone disposes of larger amounts of garbage in a privately owned dumpster that does not belong to them.

While they may sound similar, illegal dumping and littering aren’t quite the same.

Littering refers to the illegal disposal of small quantities of trash  — tossing trash out of a car window or dropping cigarette butts on the ground are common examples. If you’re caught littering, you may face a fine of around $100 to $300, depending on the state you live in.

Illegal dumping fines, on the other hand, can reach as high as $25,000, and repeat offenders could face prison time. Laws vary slightly by state, but waste typically has to meet a large enough weight and volume requirement to qualify as illegal dumping. The state of Georgia, for example, defines waste as anything over 10 pounds or 15 cubic feet in volume. Anything less than that is considered litter and has different penalties attached.

3. Cost-avoidance is the main driver of illegal dumping for businesses. (EPA)

4. People ages 18-29 were 48% more likely to deliberately participate in illegal dumping in 2019 than those in other age groups. (EPA)

Illegal Dumping Around the World

5. Romania is home to the most illegal dumping sites in Europe, with over 13,000 sites reported, as of October 2022. (Statista)

6. Indonesia, India, the United States, Thailand and China are the top five contributors to mismanaged plastic waste in the world’s oceans. (Science Advances)

9. Governments in some urban areas spend millions of dollars each year cleaning up illegal waste. (EPA)

10. 80% of ocean pollution originates from the mainland and travels to the ocean via rivers and other waterways. (LDIW)

11. 32% of businesses say they don’t know the value of fines for dumping construction waste. (EPA)

12. Construction and demolition waste is one of the most commonly reported forms of illegal dumping. (EPA)

13. Cutting costs is cited as the most common reason for illegally dumping asbestos and construction waste. (EPA)

You may wonder why someone would choose to illegally dump their trash, even if they have a proper disposal channel readily available. The following are the three most common causes of illegal dumping:

An EPA report from July 2020 states that “one in ten businesses that were interviewed in 2019 ‘strongly agreed’ they would consider illegal dumping because of the cost of taking waste to the tip.”

The very same report also states that 8% of residents interviewed may consider leaving waste in a public space because of the costs associated with taking it to the landfill.

According to Statista, the average cost to landfill municipal waste in the United States is around $53.72 per ton of waste, which pales in comparison to fines someone will incur if found guilty of illegal dumping.

As the world population grows, so does our waste generation. We’ve also seen a trend in the use of more packaging, increased food waste and purchasing items that only get used for a limited period of time and then disposed of.

With numbers like these, we can conclude that the growing excess of produced waste has a direct link to the illegal dumping problem.

A lack of education or access to legal ways to dispose of unwanted waste may contribute to illegally discarded trash. There may also be a lack of knowledge of the restrictions and laws enforced by the local government.

Most notably, not many people are aware of the consequences and effects associated with illegal dumping. While not just an eyesore, fly-tipping has serious environmental and health effects that many may not think about when disposing of their waste.

Illegal dumping may feel like a harmless act, but it has large-scale consequences that can be difficult to reverse. Here are some of the most commonly observed effects of illegal dumping:

Illegal waste can pose a serious health risk for the people living near the dumpsite. Chemicals from things like abandoned appliances, vehicle fluids, cleaners and batteries can leach into the soil and pollute local water supplies. Repeated exposure to asbestos from illegally discarded construction debris can also lead to mesothelioma and other lung problems over time.

Sharp metals from discarded appliances, vehicles and construction waste also pose a risk of physical injury. This is especially true for children playing near illegal dumpsites — children have become injured, trapped and even suffocated by discarded refrigerators and other appliances.

As with other irresponsible trash disposal methods, you may guess that there is a negative environmental impact from illegal dumping. So, how does dumping waste affect the environment?

Animals and other wildlife are usually the first to feel the negative effects of illegal dumping. Perpetrators commonly target secluded waterways and wooded areas to avoid getting caught, and chemicals found in toxic waste can put plants, animals and even entire ecosystems at risk.

Illegal dumping can even lead to widespread habitat destruction if left unchecked. Waste dumped into waterways can cause blockages that lead to flooding over time, and the highly flammable nature of some waste materials can spark spontaneous forest fires near dumpsites. This risk increases if materials that emit flammable gasses — like gypsum drywall and decomposing waste — are present.

As previously mentioned, perpetrators can face hefty fines and even felony charges if caught dumping waste in unauthorized areas. However, the financial repercussions reach much further, often affecting economies on a local and global scale.

The Environmental Protection Agency (EPA) stated that governments in some urban areas spend millions of dollars a year cleaning up illegal waste, and most of that money comes directly from taxpayers. Unsightly dumpsites also stunt commercial and residential development and cause property values to plummet, putting further strain on local economies.

Because new dumpsites commonly attract more offenders over time, communities are often forced to spend money on continuous cleanup. Even if the original offender gets away with the crime, they could experience increasing service fees and property taxes as the problem grows.

How You Can Help

Illegal dumping is a complex issue that can’t be solved overnight, but there are steps you can take to help prevent it in your community. Whether your property has been a target of illegal dumping or you have taken part in it yourself, the following tips can help you prevent it from happening again.

The best thing you can do to be proactive about illegal dumping is to stop yourself from contributing to the problem.

If you are ever unsure about where to dispose of furniture, appliances or other large amounts of waste, start by contacting your local trash pickup service. This service can provide information on bulk trash pickup and allows you to schedule a pickup time. Just keep in mind that they may only be able to take certain materials and could charge an additional fee.

If your local trash collector won’t accept it, you can take your waste directly to your local landfill or household hazardous wastes processing facility. Both of these options still charge a fee, but they are typically cheaper than hiring a junk removal service to pick up your trash. 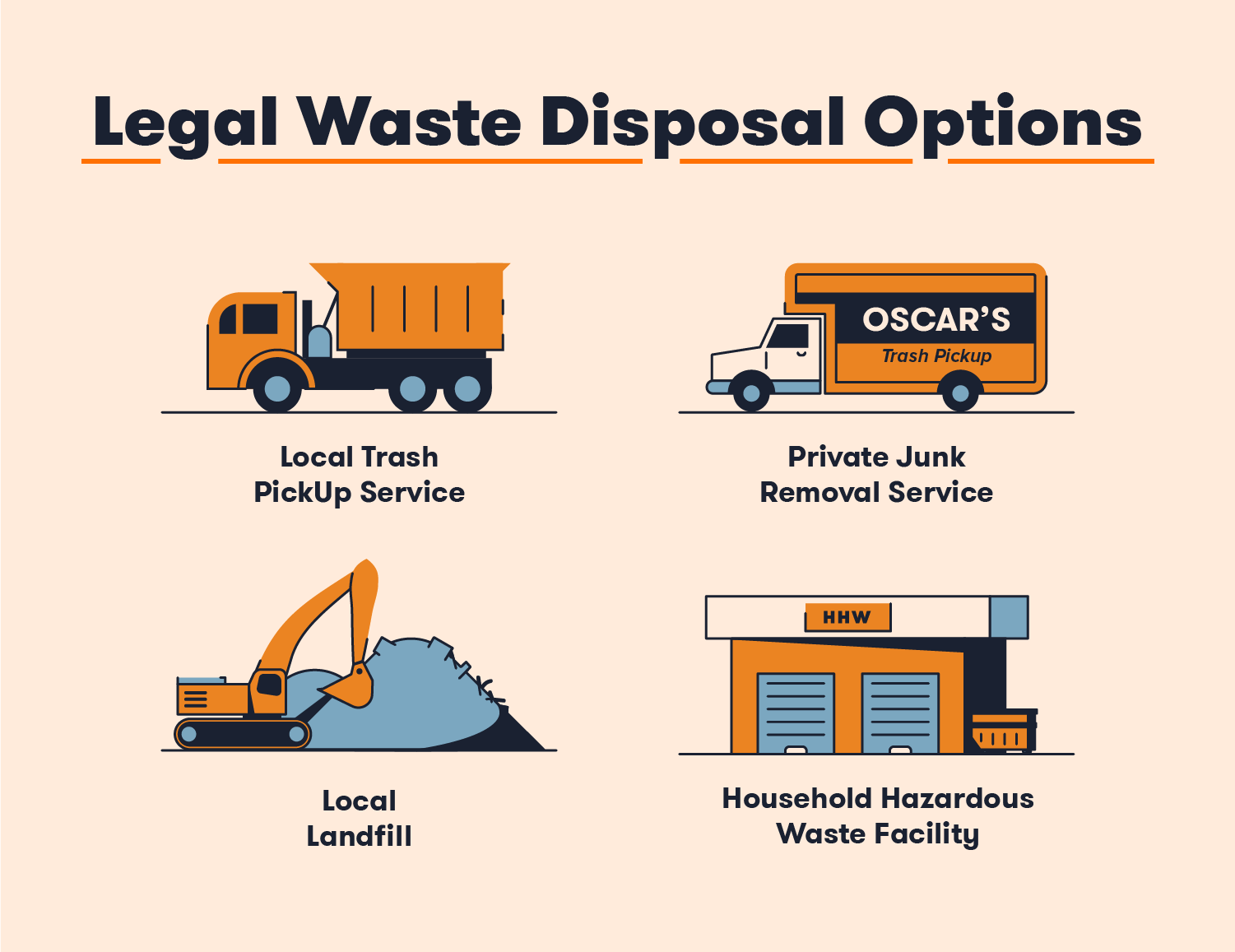 If you notice an illegal dumpsite on public or private property, you should report it to your local authorities. The EPA offers a guide to help you get in contact with your state’s environmental agency. If you would rather report the issue online, you can use the EPA’s online portal to report an environmental violation.

In recent years, new apps that simplify the reporting process have also entered the market. Apps like TrashOut allow users to quickly report illegal dumping in their communities by snapping a picture and sharing their device’s location. Some cities also offer their own apps to simplify the reporting process, and you can typically find information on them on your local government’s website.

Nonprofit organizations like the Let’s Do It Foundation organize cleanup crews, offer education programs and work to spread awareness about the dangers of illegal dumping. These organizations are gaining traction in communities all over the world, and they are a great place to start if you want to learn more about illegal dumping on a global scale.

Local nonprofits can also assist in cleanup efforts and provide additional resources. If you notice an illegal dumpsite in your area that isn’t being addressed, try reaching out to local nonprofit organizations to make them aware of the problem. Depending on the nature of the dumpsite, they may be able to send out a cleanup crew or contact someone who can help.

When it comes to preventing illegal dumping, state and local governments hold a lot of power. High costs and restricted access to waste disposal services are the two biggest drivers for illegal dumping. To combat this problem, local organizations have begun urging government agencies to lower prices for legal waste disposal and extend their service areas.

If legal waste disposal options are lacking in your area, consider joining a civic organization or local community group that advocates for better waste disposal resources. These groups often form partnerships with local governments to help secure resources, and they typically have greater influence than individual residents.

Private properties are common targets for illegal dumping, especially if they have a large dumpster or wooded area on-site. If your commercial or private property has been targeted in the past, consider taking the following preventative measures to stop it from happening again.

Whether you’re renting a commercial dumpster for a construction project or getting rid of old furniture, you should always look for legal, environmentally friendly ways to dispose of waste. It will save you money in the long run and ensure that your next project goes off without a hitch.

What Is Construction Site Preparation?
8 Stretches for Construction Workers to Lower Risk of Injury
Mapping Amazon Warehouses: How Much Square Footage Does Amazon Own?
Floating Cities: Your Guide to the Future of Urban Construction
9 Types of Infrastructure Construction Projects in 2020
13 Groundbreaking Futuristic Buildings
The Complete Commercial Building Renovation Checklist
How to Build an Underground Bunker in 9 Steps
How to Prepare Your Diesel for Winter
How to Write a Construction Daily Report [Free Template]