A Proctor soil compaction test is used to find the optimal level of moisture for soil and the maximum dry density.

Named for field engineer R.R. Proctor, who invented it while working for the Bureau of Waterworks and Supply in Los Angeles, the Proctor test is the gold standard — the most common lab test for soil compaction. It has been around since the 1930s, and its longevity is a testament to its importance and effectiveness.

The purpose of the test is simple: to identify the best moisture content for a given soil, at which it will attain its highest density. Before you begin a project, or even consider renting compaction equipment (e.g. drum rollers/compactors), it’s important to know the density you’re looking to achieve in the soil you have to work with.

What Is a Proctor Compaction Test?

The Proctor test measures soil compaction to determine the point at which soils can most efficiently be compacted using construction equipment, based on their optimal moisture content and maximum dry weight.

The importance of such measurements can’t be overstated. Anyone who’s driven on a dirt road in the rain understands that your tires are likely to get stuck in loose soil, but if the soil is better compacted, you might be able to make it through.

Soil acts the same way when used as a foundation for concrete, asphalt, and other paving materials. If construction crews simply lay these materials over poorly compacted earth, soil can be washed away from underneath them, causing cracking, buckling, and road failure that will need to be repaired again and again.

The ramifications in terms of both safety and expense (for both road and vehicle repair) are obvious. The best solution is to plan ahead by testing the soil in question to ensure it is compacted effectively before any road surface is laid.

Determining the optimum moisture content and, therefore, the maximum dry density of the soil being used as a foundation is where the Proctor compaction test comes in.

Benefits of the Proctor Test 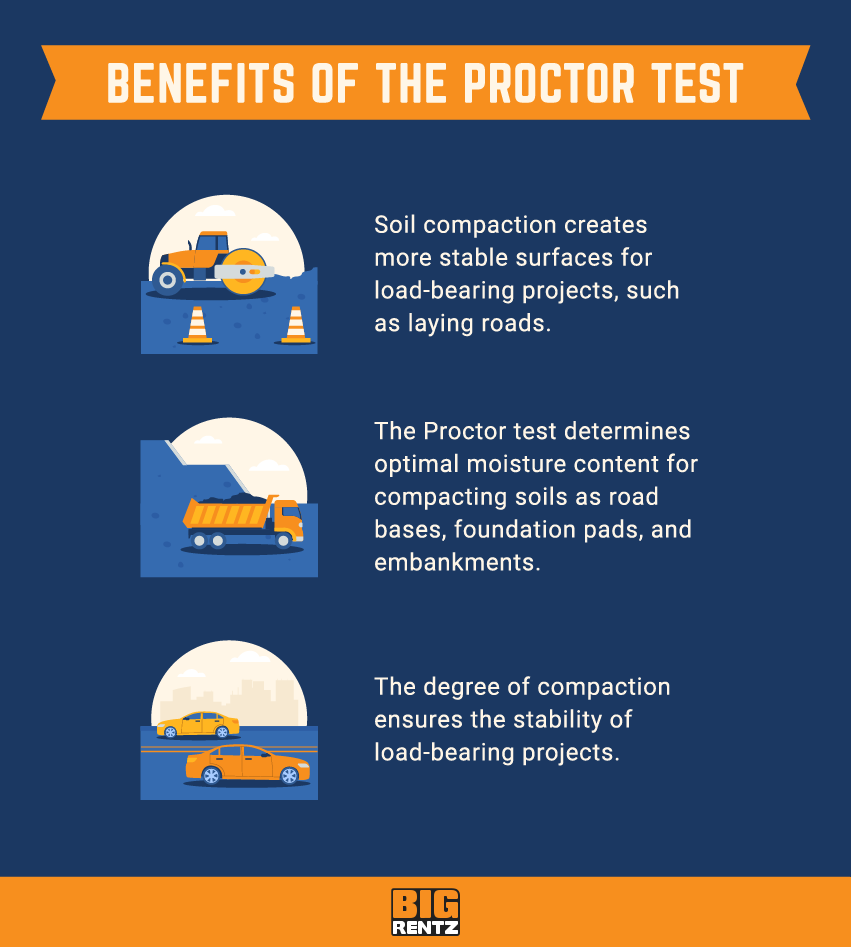 Soil compaction helps create a more stable surface upon which to lay roads, airstrips, and other projects designed to increase load-bearing capabilities.

The degree of compaction is important in ensuring the stability and durability of such projects. Compacted soil reduces the soil’s permeability, limiting hydraulic conductivity and erosion. As a result, the integrity of a roadbed (for instance) won’t be as easily compromised by subsurface water flow and subsidence.

The Proctor test can be used to determine optimum moisture content for compacting soil such as road bases, foundation pads, and embankments.

You can perform a Proctor soil compaction test with the following equipment:

Steps for Conducting a Proctor Test

In addition to having the right equipment, it’s important to follow the proper test procedure in measuring soil density. You can see the test in action in this video from the University of Missouri.

Laboratory tests on soil specimens serve as predictive models for how soil will perform in the field when compacted. Particle size can affect compaction tests. No density test for soil composed of more than 30% oversized aggregate material is available through the American Society of Testing and Materials (ASTM), and any tests that are available through various labs are difficult and expensive to perform. Oversized materials are classified as anything that is retained in a 3/4-inch sieve.

Begin by weighing the Proctor mold while it’s still empty. Take off the collar before you put the mold on the scale, then note the empty weight on a data sheet. Then weigh the moisture content cups separately and record their weights.

2. Record the mold’s height and diameter

Use a caliper to record the mold’s dimensions so you can determine the volume. Take three measurements of the diameter, equally spaced, and average them together; then do the same with the height to determine an accurate measurement.

3. Transfer your soil into the large mixing pan

Obtain a sample of air-dried soil you want to measure, and weigh out approximately 2,000 grams (4.4 pounds) on the scale.

4. Calculate the amount of water to add to the soil

This can be expressed as follows:

For this example, the amount of water needed to add to the soil for the test is 250 mL (with mL being equivalent to grams).

5. Pour the water into the spray bottle

Take water from the tap and measure it using the graduated cylinder; once you’ve obtained the right amount, pour the contents into the spray bottle.

6. Spray water onto the soil

Add the water to the soil using the spray bottle, mixing the entire contents into the mixing pan and stirring the soil regularly until you get a uniform consistency and color throughout the sample. Set the sample aside for 15 to 30 minutes.

7. Secure the collar back on the mold

To prepare for the next phase of the test, place the collar back on top of the Proctor mold and secure it.

8. Place some of the soil in the compaction mold

Use the spoon to add soil to the mold until you’ve got enough so that, when it’s compacted, it will fill just over one-third of the compaction mold.

9. Set the mold on a hard surface

10. Use a Proctor hammer to compact the mold

You should space the blows evenly over the surface of the soil to ensure the entire soil sample is evenly compacted. Drop the Proctor hammer onto the soil sample 25 times. The 5.5-pound Proctor hammer, also known as a rammer, is set at a height of 12 inches for each blow. This compaction process reduces the number of air voids in the sample.

11. Scarify the surface of the sample

Take the compacted soil back to your original working area and scarify the soil, using a spoon to make small scratches on the surface in preparation for adding a second layer of soil. This will ensure that the new layer adheres well to the first.

12. Add more soil to the top of the mold

Add more soil from the mixing pan. This time, add enough that the total amount will fill just over two-thirds of the mold’s height with the collar attached when compacted.

Compact the soil again on a hard surface, using the Proctor hammer as before.

Returning to your primary work area, set the mold on a table and remove the collar. The soil should fill the entire mold and extend slightly above the rim.

15. Use the straightedge to trim excess soil

Use your straightedge to scrape off the excess soil so the surface is level with the top of the rim. You may see some voids on the surface. Fill these with some of the remaining material from your pan, and scrape again.

16. Weigh the mold without the collar

Remove any loose soil particles that have gathered on the base and weigh the mold and soil without the collar.

17. Extract the sample from the mold

Remove the base of the mold and insert the mold, still containing the soil, in the extractor. By pumping the extractor handle, you will be able to remove the soil from the mold without damaging the sample.

18. Cut the soil compact with a knife

Split the sample lengthwise with a knife, then into pieces small enough to fit in the moisture cans.

19. Weigh soil pieces from the top and bottom

Remove smaller samples from the top and bottom, placing these in the moisture cans and weighing them. Using these specific sections of the sample will help you determine the moisture.

Put the cans in the oven, and leave them there for 24 hours to dry. After 24 hours, you can remove them and record the dry weight of the soil. You can then calculate the dry unit weight and moisture content of the specimen. 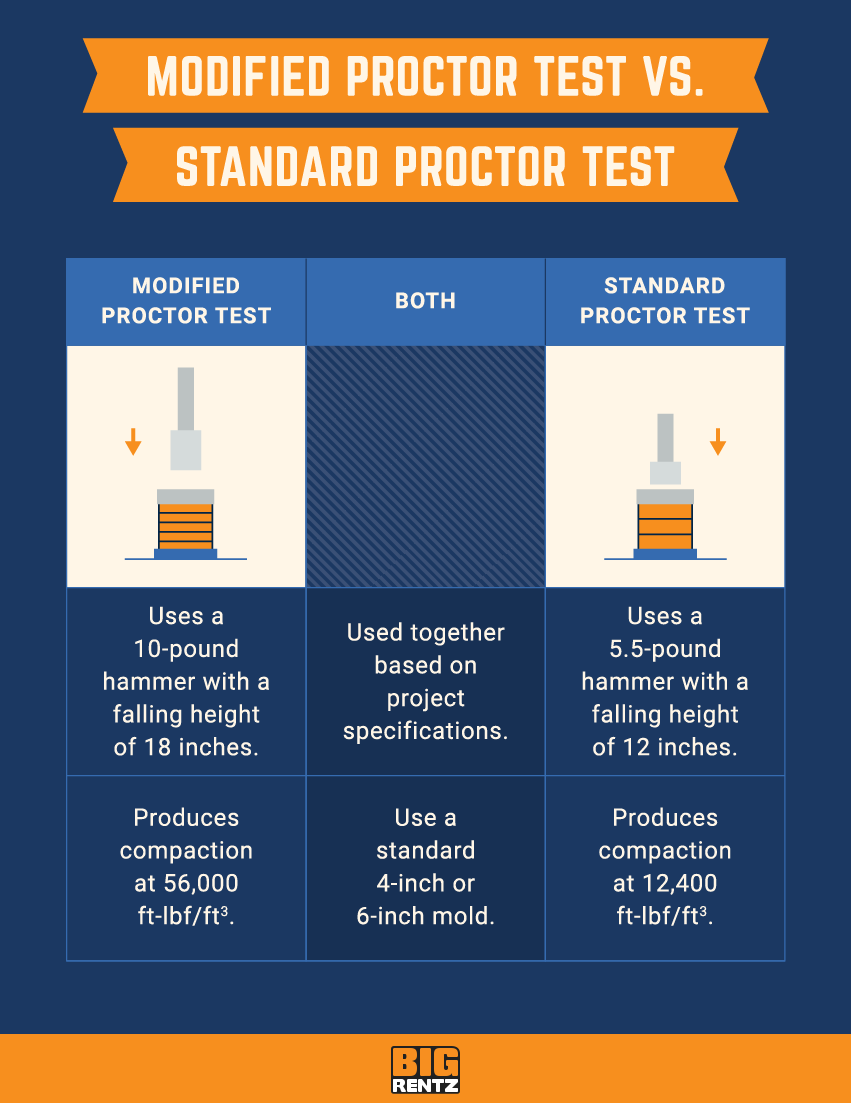 There are two versions of the Proctor test: the standard Proctor test (ASTM D698 / AASHTO T99), and what’s known as the modified Proctor test (ASTM D1557 / AASHTO T180), which was introduced in the 1950s. The newer test accounted for advances in technology involving heavy machinery, such as larger trucks, higher traffic counts on highways, and bigger airplanes, which could produce higher compaction of soil.

The standard and modified Proctor tests are conducted in a similar manner. For the modified Proctor compaction test, the Proctor hammer is heavier — 10 pounds instead of 5.5 pounds — and is dropped from a greater height — 18 inches instead of 12. The result will be lower optimum moisture content and higher maximum density for the soil.

Both tests use a standard 4-inch mold but can also use a larger, 6-inch mold. However, for this larger mold, the number of blows from the hammer is increased from 25 blows to 56. (In some versions of the test, three layers of soil, rather than two, are used.)

Both tests are still used, and the one you select will be based on the project’s specifications and the purpose for which it will be used.

Reasons for Conducting a Proctor Test

The Proctor test can be used to find the maximum level of compaction, by weight, that soil can achieve at optimum water content. This information can be used in compactive efforts for geotechnical engineering in projects such as roadbeds and airstrips.

A Proctor test can give you an idea of the maximum weight that a given type of soil can be compacted at a certain water amount. At a certain point of compaction, the water will start to displace the soil particles, which will let you know you’ve exceeded the optimum moisture content (or optimum water content) level.

The point on the curve before this happens is the soil’s maximum compaction or maximum dry density. 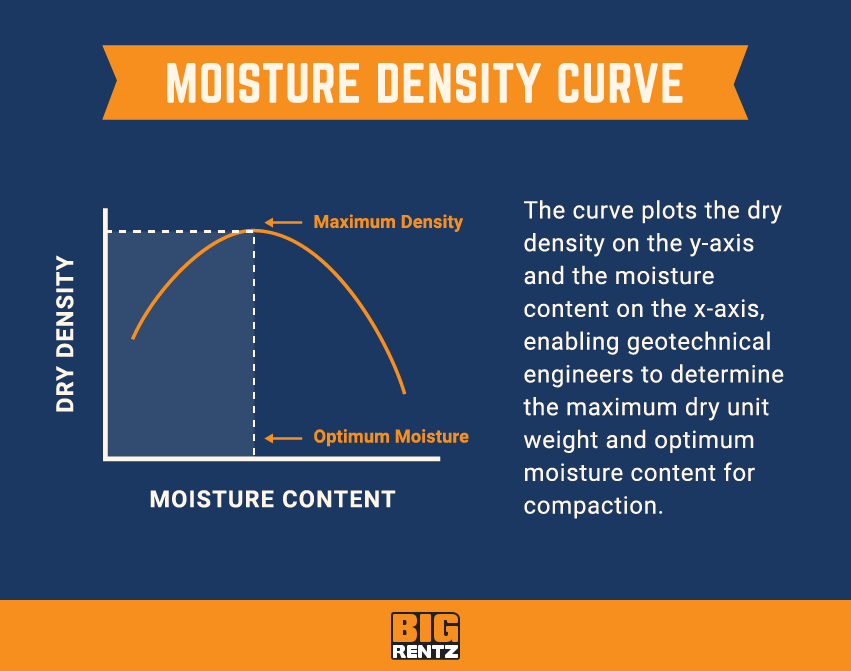 Repeating the Proctor test several times will enable you to plot a compaction curve based on the results. Such a curve plots the dry unit weight on one axis and the water content on another, enabling you to determine the maximum dry unit weight, and optimum water content for this weight.

The unit weight or moist density of a compacted soil sample can be determined by dividing the soil mass, not including the mold, by the volume of the mold. In turn, you can discover the dry density of soil in the sample by dividing this number by the percent moisture divided by 100 and adding 1.

Achieving the proper compaction level is crucial to the success of a load-bearing engineering project. Different types of soil have different optimum moisture content levels, so it’s important to test the soil specific to your project site ahead of time.

The Proctor compaction test gives you the means to do this. It’s a convenient way to prepare for compaction and subsequent paving on a micro level before you embark on a full-scale project.

How Are Roller Coasters Built
The Complete Commercial Building Renovation Checklist
From Construction Sites to Constructed Housing: Resources for Homeless Veterans
How to Read Construction Blueprints
15 Surprisingly Hackable Things in Your Daily Life
The Science of Demolishing a Building
5 Building Construction Types: Fire Resistance Ratings
The 15 Forklift Safety Tips To Avoid Injuries
Scissor Lift Sizes: How To Choose the Right Height
15 Types of Compactors and When To Use Them