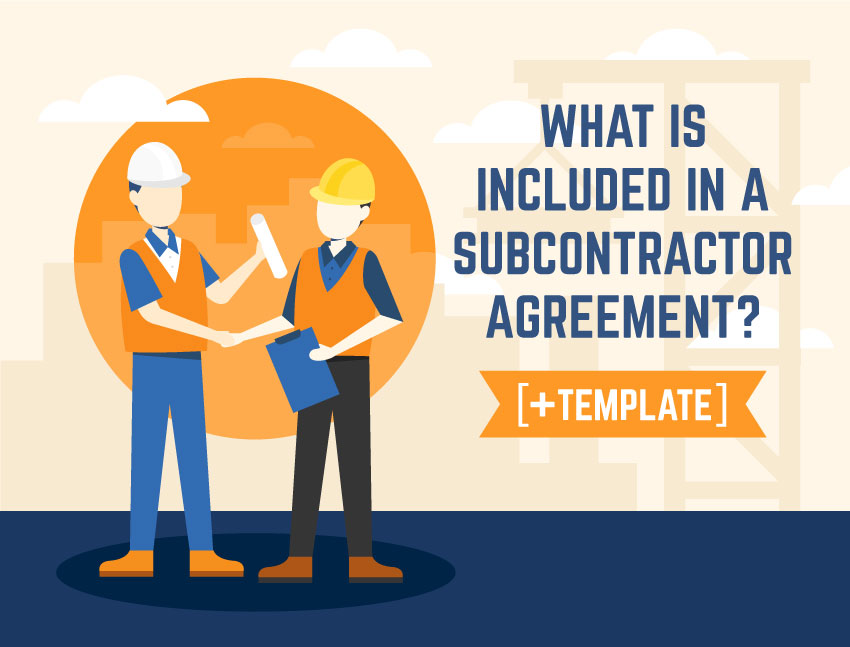 When a subcontractor agrees to take a job from a contractor, it’s important to set up an agreement. It’s for the protection of both parties, and the subcontractor actually has more to gain by defining the job precisely.

A subcontractor agreement can keep subcontractors from being called upon to do work that’s outside their expertise, or from being blamed for poor workmanship on aspects of a job they weren’t responsible for.

We’ll explain what a subcontractor agreement is and provide a template for you to build your own.

What Is a Subcontractor Agreement?

A subcontractor agreement is a legal document that defines subcontractor responsibilities clearly. It sets forth things like timelines, terms of payment, licensing, insurance coverage, and how disputes are to be handled. 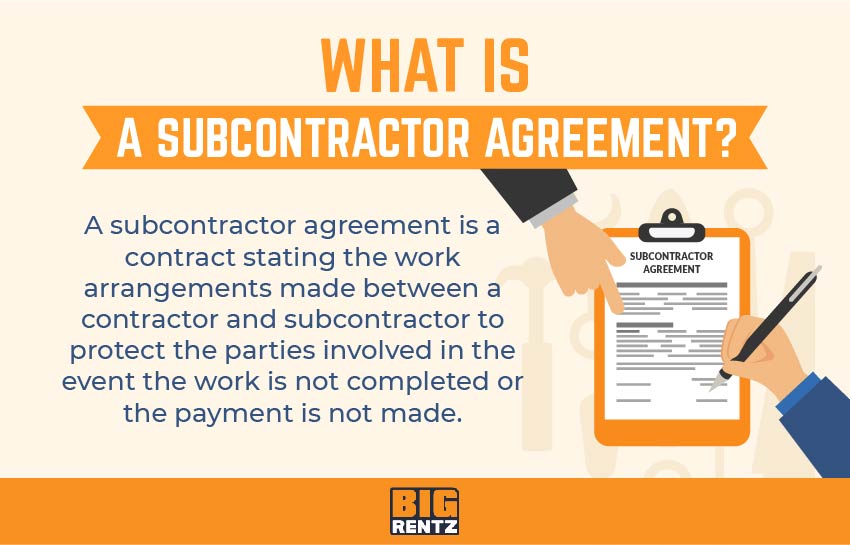 Why Would I Need a Subcontractor Agreement?

A subcontractor agreement is necessary to specify a general contractor’s and subcontractor’s responsibilities toward each other on a host of issues. Without a written agreement, expectations aren’t clear, misunderstandings may occur, work may not get done, and projects may be put in jeopardy.

What Is Included in a Subcontractor Agreement?

Any sub-subcontractors will fall under the subcontractor’s purview and would not be included directly in the agreement.

Disputes are not uncommon when it comes to construction projects, so it’s important to have a clause in your agreement detailing how those disputes will be resolved. An alternative dispute resolution clause, or ADR, may require that claims go to mediation or binding arbitration. Other contracts may require good faith attempts to resolve a dispute before either party considers litigation, and may contain language that requires the losing party in any court action to cover the prevailing party’s attorney fees.

It may also allow for a termination of convenience, under which one party decides to terminate the contract based on the simple desire to do so. Terminations of convenience must be specifically stated as an option in the contract in order to be considered.

Please note that this template is an example of what can be included in a subcontractor agreement, but you’ll need to adjust it to fit your project. Consider exactly how you want to handle disputes, what drawings and documentation are required, and how project changes or delays will be handled. 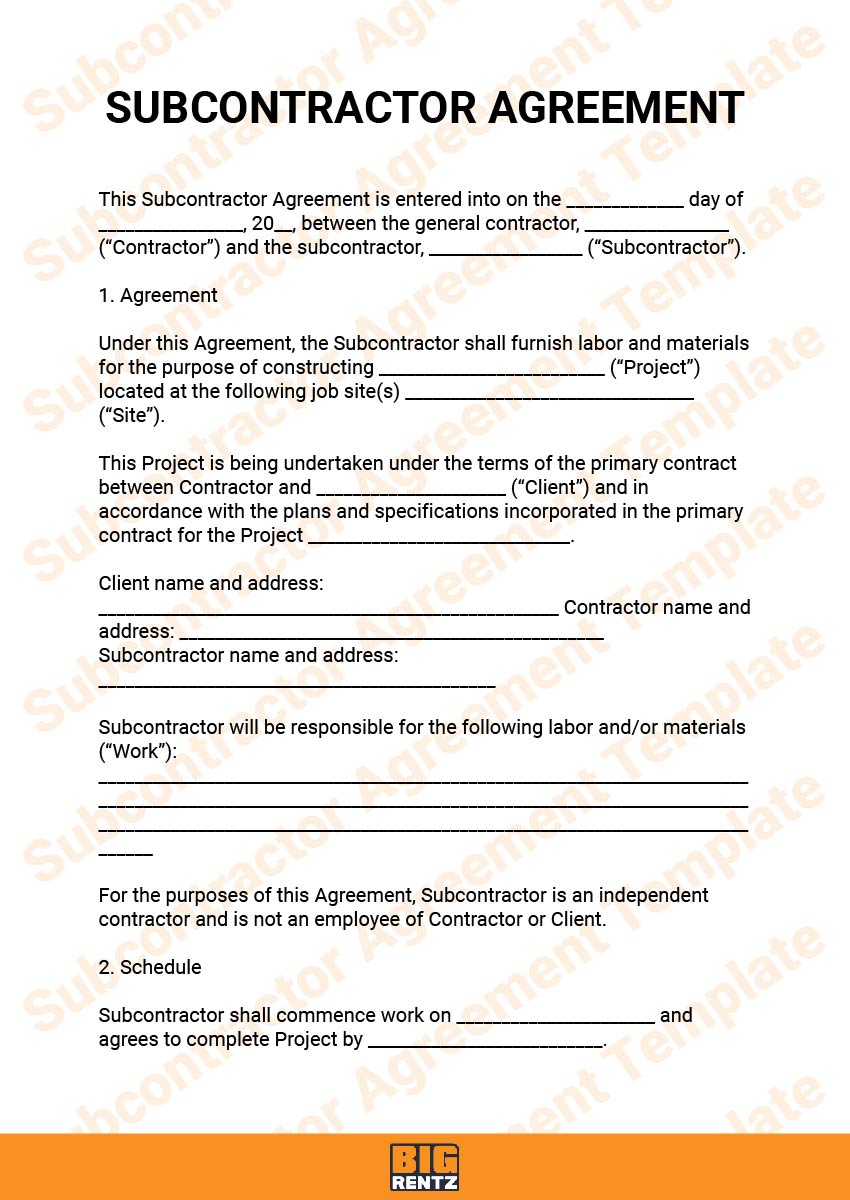 A few terms may be found in a contract that stipulate the conditions and timetable for a subcontractor to get paid, and that address what occurs in the event of a project delay or if liability is incurred by the subcontractor. Here are a few of those: 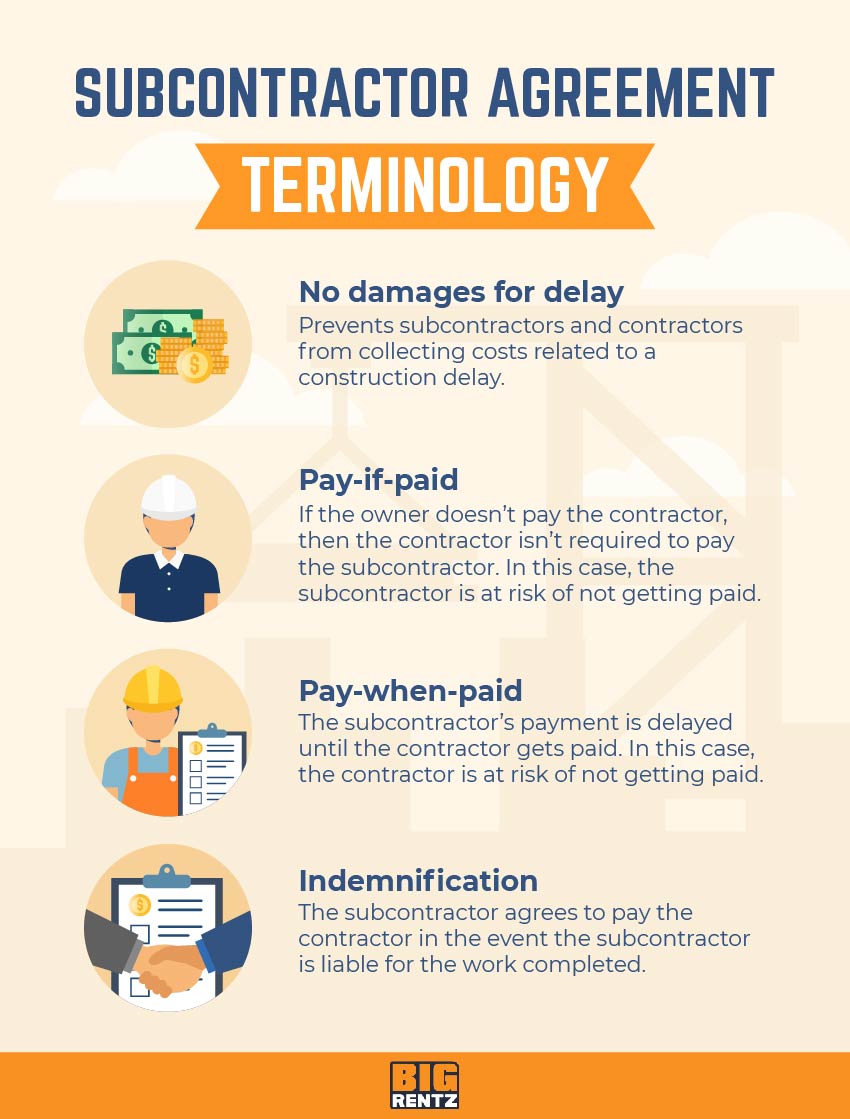 No Damages for Delay Clause

A “no damages for delay” clause is exactly what it sounds like. It simply means that, under such a clause, a subcontractor is not allowed to submit any claim that would recover financial losses that result from construction delays.

Some states do not allow NDFD clauses to be included in contracts. Where such language is allowed, it should address specific types of delays. It’s also important to address whether and how the delays might cost the project money.

When you work as a subcontractor, it pays to have a solid agreement and a good understanding of what you’re signing. Subcontractor agreements are put in place to protect both parties, but they can benefit a subcontractor in particular. Before you sign, be sure all the clauses you need to protect your interests are in place. That way, you’ll be paving the way for a smooth working relationship and a successful project, too.

The 10 Best Construction Jobs For Your Career
4 Types of Steel: What Makes Them Different?
How to Remodel a Store to Boost Sales
Construction Schedule Template (Free Download)
20 Essential Construction Podcasts to Listen to in 2022
The 10 Trenching Safety Tips That Can Save a Life
How to Dispose of Concrete Properly
How to Build a Life Off the Grid
How to Stay Healthy When You're Standing All Day
How to Understand Floor Plan Symbols
Business Share this article: