In 2020, the global construction market was estimated at just under $140 billion, and it’s expected to grow to more than $175.5 billion by 2025. With market growth, there’s also increased demand for construction equipment and equipment rental.

This growth is also likely to increase business for the top 10 heavy construction machinery manufacturing companies, led by U.S.-based Caterpillar and Japan’s Komatsu, both of which sold more than $20 billion of equipment in 2020.

Caterpillar leads the pack in heavy equipment manufacturing, selling $24.82 billion worth of equipment in 2020. Sales and other revenue combined totaled $41.7 billion.

Caterpillar ranks number one in terms of market share. In 2017, it accounted for 16.4% of the market and pulled in revenue of $54.7 billion. In business since 1925, the Fortune 500 company, based in Deerfield, IL, has more than 500 locations worldwide and has established itself as the North American and global leader in the construction industry.

Komatsu Ltd. was founded as Komatsu Iron Works in 1921 and is the world’s second-largest construction and mining equipment manufacturer behind Caterpillar. It has 81 manufacturing facilities worldwide for construction, mining, and utility equipment, including 34 in the Americas. It also has operations in Japan, Asia, Europe, Africa, and Oceania.

Xuzhou Construction Machinery Group, or XCMG for short, is a Chinese corporation that ranks third worldwide in construction equipment sales at $15.16 billion as of 2020. Founded in 1943, it ranks 65th among the top 500 companies in China. It developed China’s first tower crane, 10-ton steamroller, and 10-ton truck crane.

Like XCMG, Sany is based in China and has a global reach, with $14.42 billion in sales in 2021. Founded in 1989, it has operations in places as diverse as Germany, India, the United States, and Latin America.

Zoomlion, founded in 1992 and also based in China, sold $9.45 billion worth of equipment in 2020. It has subsidiaries in East Asia, Southeast Asia, and Europe, and industrial parks in Belarus, Brazil, Germany, India, and Italy. Its current focus is to integrate the manufacture of engineering machinery, agricultural machinery, and financial services.

Based in Illinois, John Deere has been around for a long time: since 1837, to be exact. Its distinctive primary color earned a shout-out in Joe Diffie’s 1993 top 5 country hit, “John Deere Greene.” The company slogan is “Nothing runs like a Deere,” and plenty of them ran in 2020 when the company racked up $8.95 billion in sales. A global Fortune 500 company, John Deere is the second-largest U.S. heavy machinery company, after Caterpillar.

John Deere makes agricultural, construction, and forestry machinery; diesel engines; drivetrains; and a host of other equipment ranging from mowers to tractors, scrapers to wheel loaders, and harvesting equipment to dump trucks. It’s widely known for its agricultural machinery, especially its tractors.

Most people probably associate the name Volvo with cars. So you might be surprised to learn that Volvo Construction Equipment ranks number one in Europe and sixth on the worldwide list of construction machinery sales ($8.85 billion in 2020). Even older than John Deere, the Swedish company was founded in 1832. Volvo CE has production facilities in Sweden, Belgium, Brazil, China, India, Korea, the United Kingdom, and the U.S.

Founded in Japan in 1910, Hitachi had $8.55 billion in sales in 2021. In 2002, it forged a partnership with the construction and forestry division of John Deere, which manages its sales, marketing, and many product support functions in the Western Hemisphere. Deere-Hitachi manufactures excavators in Kernersville, N.C., and Sao Paulo, Brazil. Hitachi provides small- and large-scale equipment throughout the world (North America, Asia, Europe, Japan, and Africa).

Liebherr is a multinational German-Swiss manufacturer that produces 13 product segments and racked up sales of $7.81 billion in 2020. Founded in 1949 in Germany, its headquarters are now in Bulle, Switzerland. The company is named for the founding Liebherr family, which still owns the business. In addition to construction and agricultural equipment, Liebherr also makes refrigerators and other domestic appliances.

Liebherr has an extensive line of cranes “of every kind and size,” from mobile cranes to tower cranes to maritime cranes. It also manufactures earthmoving equipment, mining equipment, wheel loaders, crawler tractors and loaders, telescopic handlers, drilling rigs, and dump trucks. Other areas of focus include concrete technology, aerospace, and transportation systems.

Doosan Infracore is a South Korean company founded in 1937 as the first large-scale machine manufacturer on the Korean Peninsula. It sold $7.11 billion worth of construction machinery in 2021.

Who Are the Largest Heavy Equipment Manufacturers in the World? 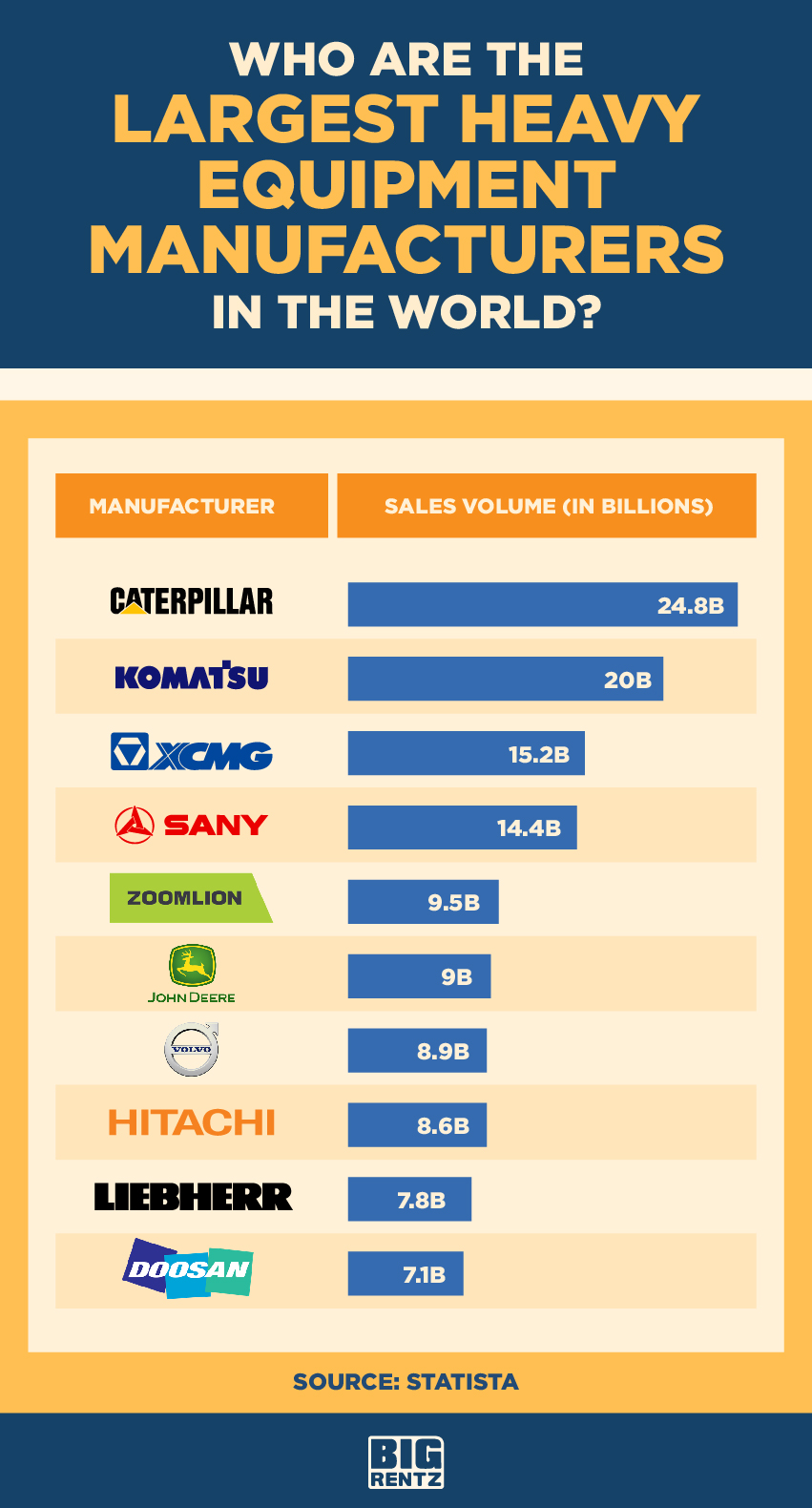 In the United States, Caterpillar and John Deere rank first and second, respectively, while Chinese companies (XCMG, Sany, and Zoomlion) take up three of the top five spots. In fact, China has surpassed the United States as the world’s largest manufacturer of construction equipment.

The top three manufacturers on the list sold more together, at roughly $60 billion, than the next six on the list combined.

Some companies moved up the list, while others dropped between 2019 and 2020. Zoomlion was key to China’s overall improvement, rising from No. 10 to No. 5 after being ranked 13th the year before.

XCMG and Sany moved up, too, having been ranked fourth and fifth, respectively, in 2019. Both surpassed John Deere, which had risen from No. 9 all the way up to No. 3 after purchasing the German-based Wirtgen Group. In 2020, John Deere dropped to No. 6. 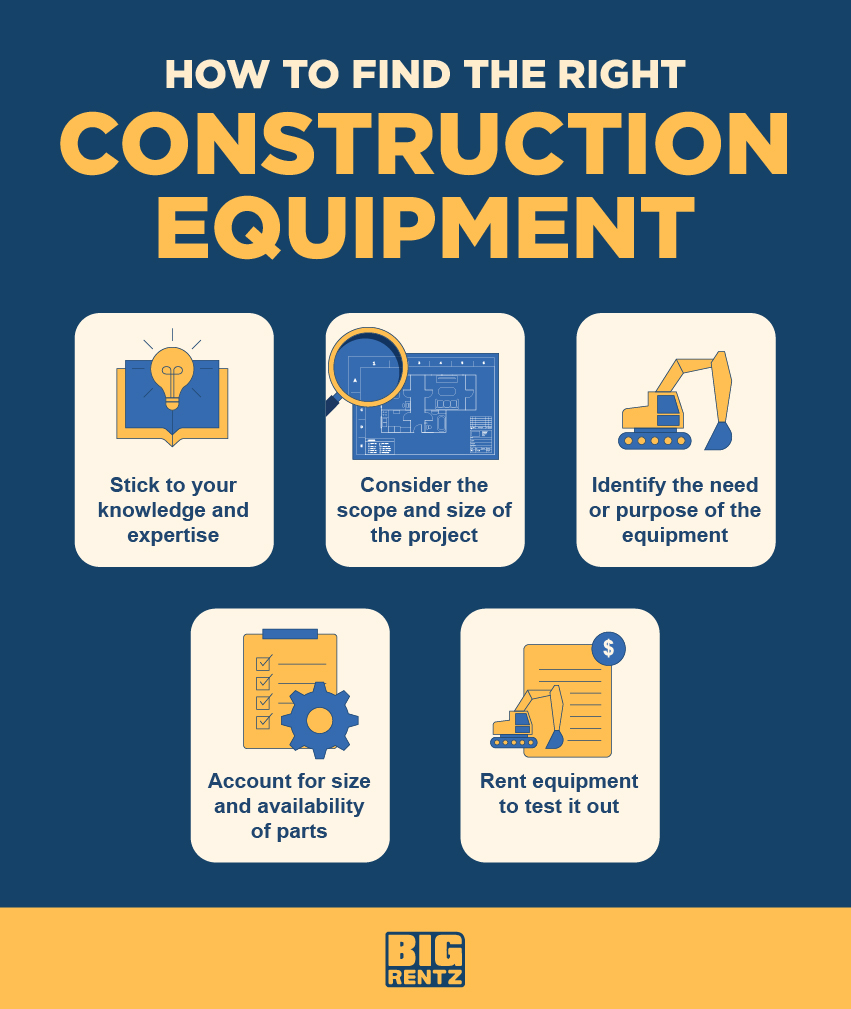 1. Stick to your knowledge and expertise

While new models won’t be the same as old equipment, it’s important to consider which equipment operates similarly to what you’re used to and which has a steep learning curve. The more familiar you are with the equipment, the higher the productivity and the lower the likelihood for accidents. The Occupational Safety and Health Administration (OSHA) provides training for heavy equipment operation.

Make sure you have all the necessary parts to keep your equipment working properly. If your equipment fails on the job, it can result in injuries and missed deadlines. Changing parts during routine maintenance, rather than after a breakdown, can save time and money, while keeping everyone safer.

3. Identify the purpose of the equipment

It’s important to understand the purpose of each piece of equipment, so you purchase equipment with the correct features. If you’re not sure which machine will work best, try renting equipment first.

4. Consider the scope and size of the project

Survey your project and see what kind of construction equipment you will need for the job. Depending on your budget and job specifications, you may need multiple pieces of equipment to execute everything you have planned.

5. Rent equipment to test it out

Once you know what equipment you’ll need, rent different machines and test them to make sure they’re correct for the job. You might require something you hadn’t thought of or find that a certain piece of equipment isn’t quite what you needed after all.

There are many construction equipment suppliers and pieces of equipment to choose from. Read reviews, talk to other construction professionals about the pros and cons of different options, and, when in doubt, rent equipment to test it out before purchasing.

How Much Does it Cost to Rent a Dumpster?
What Is a Sheepsfoot Roller?
How Much Does It Cost to Rent a Skid Steer?
Do You Really Want to Buy that Scissor or Boom Lift? Why Renting is a Better Option
The Tallest Boom Lifts in the World
25 Construction Safety Statistics for 2022
How Are Roller Coasters Built
Generator Amperage Chart: kVA and kW to Amps Conversion
Is it Time to Remodel Your Company's Offices? How to Design a Millennial-Friendly Workplace
What Telehandler Size is Right For Your Job?