How do Porta-Potties Work? You see them (and have used them) at festivals, fairs, and outdoor areas, but do you know how porta-potties work?

Porta-potties are a staple at any large outdoor event. In construction, they are required by law to be placed on job sites. These portable loos provide convenient access to a restroom, prevent contamination of the site, and help workers remain focused and comfortable on the job.

While they aren’t very pretty, porta-potties do get points for being functional and inexpensive to rent. They also save a lot of water – an estimated 45 million gallons a year – and they’re better than squatting it out on a construction site.

So, how do porta-potties work? Here’s how they help you do your duty.

A porta-potty – also called a portable toilet, chemical toilet, or porta-john – consists of a translucent roof, vents, and a high-density body made of aluminum and polyethylene. On the inside of the compartment, there is a non-splash urinal, toilet seat, holding tank (usually 60 gallons), and a non-slip floor to prevent any messy accidents.

Some units also contain a flushing mechanism and pressure system that help circulate water and chemicals inside the tank.

Unlike outhouses, porta-potties are not connected to any plumbing or sewage and their primary purpose is to hold waste temporarily until it can be disposed of by a professional sanitation team.

What is the Chemical Used Inside Portable Toilets?

While there is no universal formula for the chemical inside a porta-potty, the five main ingredients inside that blue swamp are:

Dye is mixed into water to help hide the appearance of waste.

Blue chemicals are the standard because they turn green after mingling with enough waste, indicating to workers that the chemicals inside are no longer effective and should be replaced.

Fragrances are used to mask some of the foul smell. Bubblegum and cherry are two of the most commonly used scents.

Surfactants placed in the concoction also help the fragrances dissolve better in water, helping the scent spread more uniformly throughout the unit.

Biocides and enzymes are used in most modern porta-potty units is comprised of enzymes and microbes that feed on the odor-causing bacteria in human waste and speed up the decomposition of organic matter, making disposal easier later on.

While porta-potties are usually effective, weather can compromise them. Hotter temperatures can intensify odors emitted by waste bacteria, causing them to stink up the unit more quickly. To combat this, operators bump up the chemical-to-water ratio in the summer.

While a porta-potty unit contains vents and can also reflect light to help reduce heat, it is also wise to move the unit to an area with less direct light and where there is more natural airflow.

When weather is colder, on the other hand, a salty brine must be added to the chemical tank in order to prevent it from freezing.

To do so, porta-potties include a clever salt-emission tool: as porta-potty patrons use the urinal, a cake of rock salt releases more brine into the tank to lower the freezing point of the chemical solution and prevent the formation of frozen excrement (which, needless to say, would make cleaning very difficult).

How are Porta-Potties Emptied?

Because they are self-containing, the waste in porta-potties needs to be removed by very dedicated people. On an average day, a sanitation worker will service 40 to 50 units, and porta-potties are cleaned on a weekly basis or approximately once every 100 uses.

To empty the unit’s bowels, sanitation workers connect a vacuum directly to the holding tank or output hole if the unit has one. The vacuum suctions the waste into a large tanker truck that is equipped with a waste storage unit and a smaller freshwater tank.

Once the waste is removed, workers fill the porta-potty holding tank with some fresh water, dye, and an enzyme solution. They then spray the walls, floors, seats, and urinals to clear bacteria and any doo that might have splashed around.

Paper towels, toilet paper, hand sanitizers, and other supplies are restocked. The tanker truck then delivers the waste to a municipal treatment plant to be disposed of along with the waste from traditional plumbing systems.

Porta-potties are safe to use for your waste disposal needs, but they do have a messy reputation. Almost 75 percent of Americans feel that porta-potties are not a clean solution. 95 percent refuse to make any contact with the seat.

The truth is, many porta-potties look unsanitary because they are not properly maintained. While bacteria for illnesses such as norovirus, shigellosis, salmonella, and hepatitis A can be caught from portable toilets, any individual can avoid being affected with proper hygiene and a healthy immune system.

How about the safety of the chemicals inside a porta-potty? While portable toilets used to contain formaldehyde, the same chemical used to preserve human tissue, it has become outlawed in many states due to its toxicity, which can be dangerous to human health and have negative effects on the environment. Today, porta-potties use biocides that are non-toxic in its diluted form.

What to Consider Before Renting a Porta-Potty

Portable toilets come in many shapes, sizes, and features. When renting a porta-potty, there are a few important factors to consider.

Type of Project or Event
The event type will help determine the correct kind of portable toilet and how much rental time you need. For example, you can choose from standard porta-potties or upgrade to “luxury” trailers and climate-controlled units based on the project.

Number of People
The general rule of thumb is that there should be one porta-potty for every 40 to 60 people – if it’s for a construction site, that ratio should be higher at one unit for every 20 workers.

Location
If you have more land to cover, you’ll need to rent more units. The proximity of the unit to your event or construction site will also affect the delivery and maintenance costs.

Maintenance
Depending on the length of your event, more regular maintenance might be required to keep the porta-potties clean. You’ll also want to confirm that the rental company you choose upholds appropriate sanitation standards. 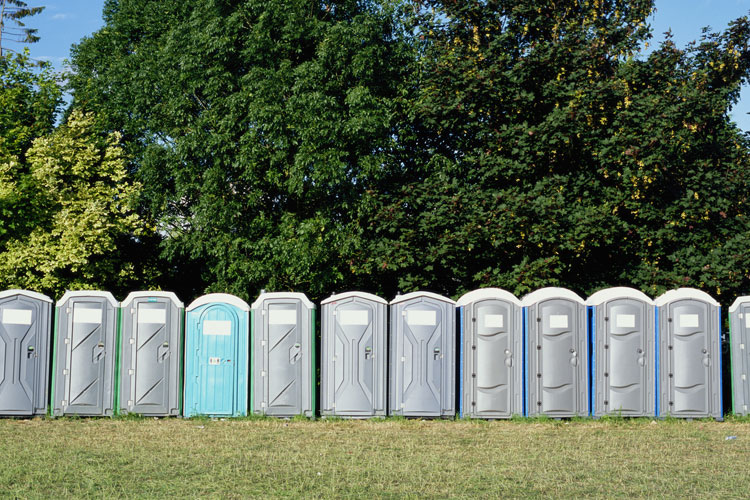 Portable toilets have come a long way over the years. Some units now have marble walls, porcelain seats, flushing systems, and sanitation amenities. The bottom line: porta-potties provide an effective, safe, and inexpensive way to take care of your business.

Looking for on-site solutions for your next construction project? BigRentz offers a variety of rentals for site services.

17 Science-Backed Benefits of Working Outdoors
13 Types of Generators and Their Uses
What is a Boom Lift?
8 Types of Construction Lifts and Their Uses
Bagster vs. Dumpster: Which Is Better for your Project?
What Size Dumpster Do I Need?
Veteran-Owned Small Business (VOSB) Guide for Contractors
What Is An Aerial Lift? Uses and Types Explained
How to Become a Heavy Equipment Operator
Types of Pallet Jacks