Mass Timber: Is Wood the Future of Sustainable Construction? Buildings made entirely from wood are a rare find in modern cities, but engineers and environmental advocates are looking to change that with mass timber, a modern framing system that has transformed what we know about wooden buildings.

Mass timber (short for “massive timber”) is a building system that uses wood bonded together in layers to create strong and sustainable planks, posts, beams and other structural elements. Mass timber materials are designed to achieve the same strength ratings as non-wood materials like concrete and steel while maintaining a much lighter weight.

Mass timber has made headlines in recent years as a new way to cut building costs and reduce the construction industry’s carbon emissions. The building sector produced 38% of energy-related CO2 emissions in 2019, and material manufacturing and shipping were partially responsible. To help make the supply chain more sustainable, companies are turning to mass timber for its lower carbon footprint.

Read on or skip to the infographic below to learn about the benefits of mass timber buildings and why they could become a fixture in the world’s future cities.

There are multiple mass timber products on the market today, and each one uses a unique method to turn small pieces of wood into a strong, solid product. The following products are the most commonly used materials in mass timber construction today. 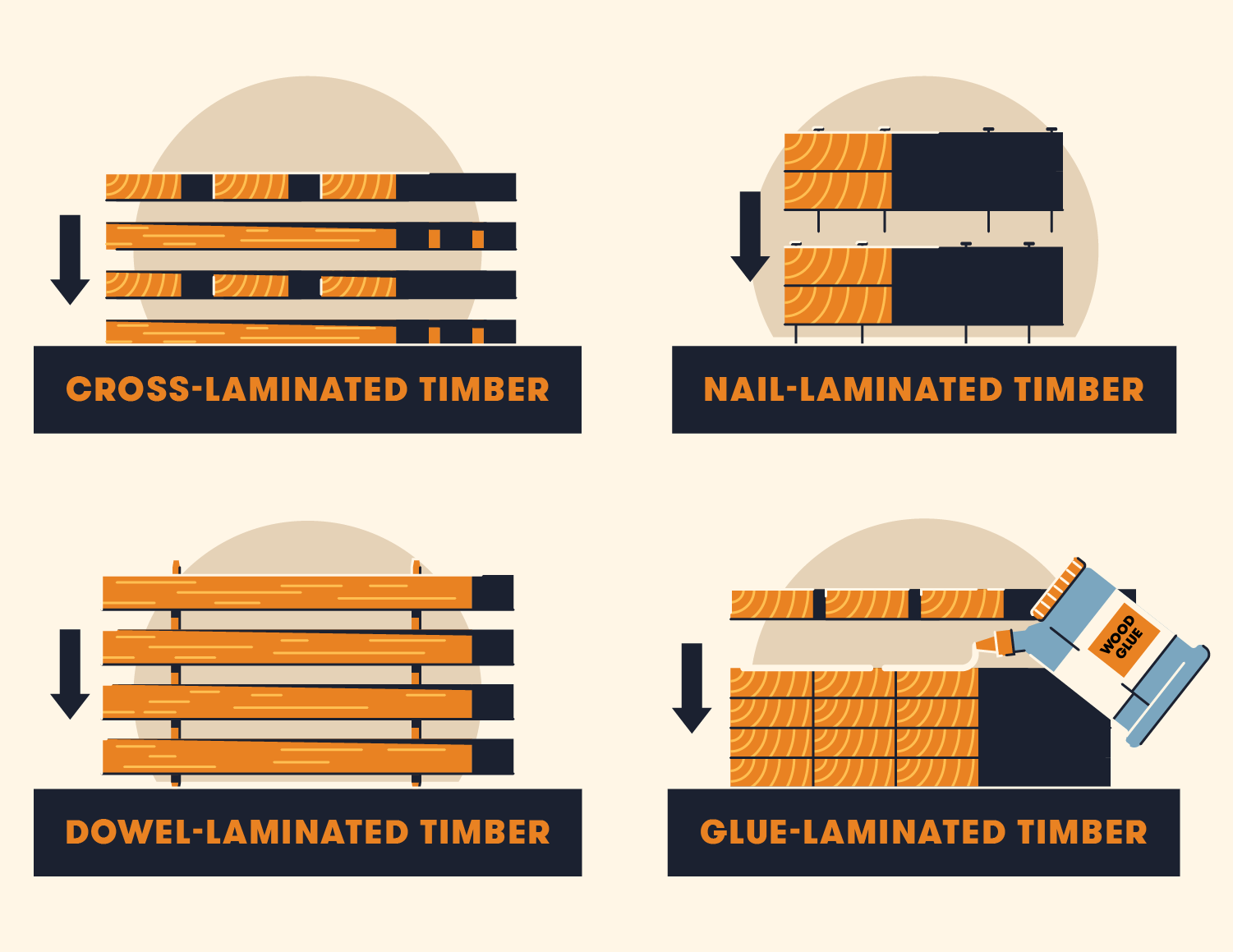 Cross-laminated timber (CLT) is one of the most commonly used products in mass timber construction. CLT panels are made from multiple layers of wood layered perpendicular to one another and connected with a strong adhesive. Any knots or other defects in the wood are removed before fabrication, and the planks’ alternating grain structure makes them stronger and more stable than traditional boards.

Like CLT, nail-laminated timber (NLT) is made with multiple layers of wood connected to form a large panel or beam. The layers are stacked face to face rather than perpendicular, and each piece of wood is connected with nails instead of adhesive. Because they don’t need to be fabricated in a manufacturing facility, NLT panels can be assembled on or near the construction site.

Used for: Floors, roofs and other horizontal surfaces

Dowel-laminated timber (DLT) is the only all-wood mass timber product on the market. It doesn’t require chemical adhesives, and it uses wooden dowels instead of nails to hold each layer together. This makes it a popular choice for manufacturers looking to cut panels into acoustic or aesthetically pleasing shapes without the risk of damaging their cutting tools on nails.

Like CLT, glue-laminated timber (GLT) is made of multiple layers of wood glued together with strong adhesives. The pieces are stacked parallel to one another to create beams and vertical columns, and GLT is commonly used to support panels made from other timber products.

Mass timber and heavy timber share some similarities, but they are not the same. While mass timber involves specific engineered materials like NLT and CLT, heavy timber is a traditional construction method that uses heavy sawn or glue-laminated beams to create a framing system.

Heavy timber framing has been around for centuries and was traditionally used in multistory storage and industrial buildings. However, modern heavy timber framing is used in many types of structures, from schools and auditoriums to supermarkets and hotels. Heavy timber can incorporate mass timber products, and it is known for its durability and fire resistance.

Mass timber construction has many benefits for both builders and the environment. The following benefits of mass timber are encouraging companies around the world to adopt this new construction method.

Producing modern load-bearing materials like concrete or steel emits high levels of carbon into the atmosphere. Because wood is a lower carbon material than concrete or steel, building with mass timber can potentially reduce a structure’s overall carbon footprint. A 2019 study found that a hybrid mass timber building achieved 26.5% lower global warming potential than a concrete building.

That said, tracking the total carbon footprint for mass timber can be difficult since most of its greenhouse gas emissions come from a complex supply chain. For mass timber to be truly carbon neutral as it becomes more commonplace, manufacturers will need to maintain sustainable forest management practices.

Mass timber structures take less time to construct and produce less waste than steel- and concrete-supported structures, making them more cost-effective to build. While highly engineered mass timber materials like CLT can cost more per unit than concrete and steel, lower labor and construction costs easily make up for it.

Mass timber is both strong and lightweight, making it one of the best building materials for areas prone to earthquakes. Beams made from mass timber products have high degrees of ductility, meaning that they can withstand major bending and distortion without breaking. This is ideal for buildings in earthquake zones since seismic activity can put intense horizontal pressure on structures.

While mass timber has gained traction as a cheaper and sustainable alternative to steel and concrete, many people still have reservations about using it for structural purposes. The most common concerns revolve around its fire resistance and impact on the world’s forests.

Deforestation is one of the biggest environmental concerns of our time. Between 1990 and 2020, the world lost roughly 420 hectares of its forests to land development. While agricultural development is the leading cause of deforestation worldwide, many people wonder if mass timber construction will add to the problem as it becomes more popular. While this is a valid concern, mass timber could help promote forest management when sourced locally using sustainable practices.

Mortality rates for U.S. forests have increased in recent years due to fires and disease, and the North American Mass Timber State of the Industry Report found that manufacturers could use some of that diseased wood for mass timber manufacturing. Because the U.S. currently grows more timber than it loses to logging and natural mortality, this could decrease mortality rates and help maintain healthy forests.

Another common concern people have with timber buildings is that wood burns easily. Cities quickly moved away from building with wood around the turn of the century to reduce the risk of fires, and many people are still hesitant to reintroduce structural timber into modern buildings.

Fortunately, mass timber buildings are designed to be fire-resistant and meet the same fire safety standards as their steel or concrete counterparts. The U.S. Forest Service and International Code Council have performed extensive fire safety testing on CLT and have determined that it can burn for hours without losing its structural integrity.

Large, compressed timber materials like CLT may even perform better than steel in some cases. Because mass timber is designed to char on the outside and remain intact on the inside, it remains structurally sound when exposed to fire. Structural steel, on the other hand, can lose its strength when exposed to extreme heat, putting a building’s structural integrity at risk.

The Future of Mass Timber 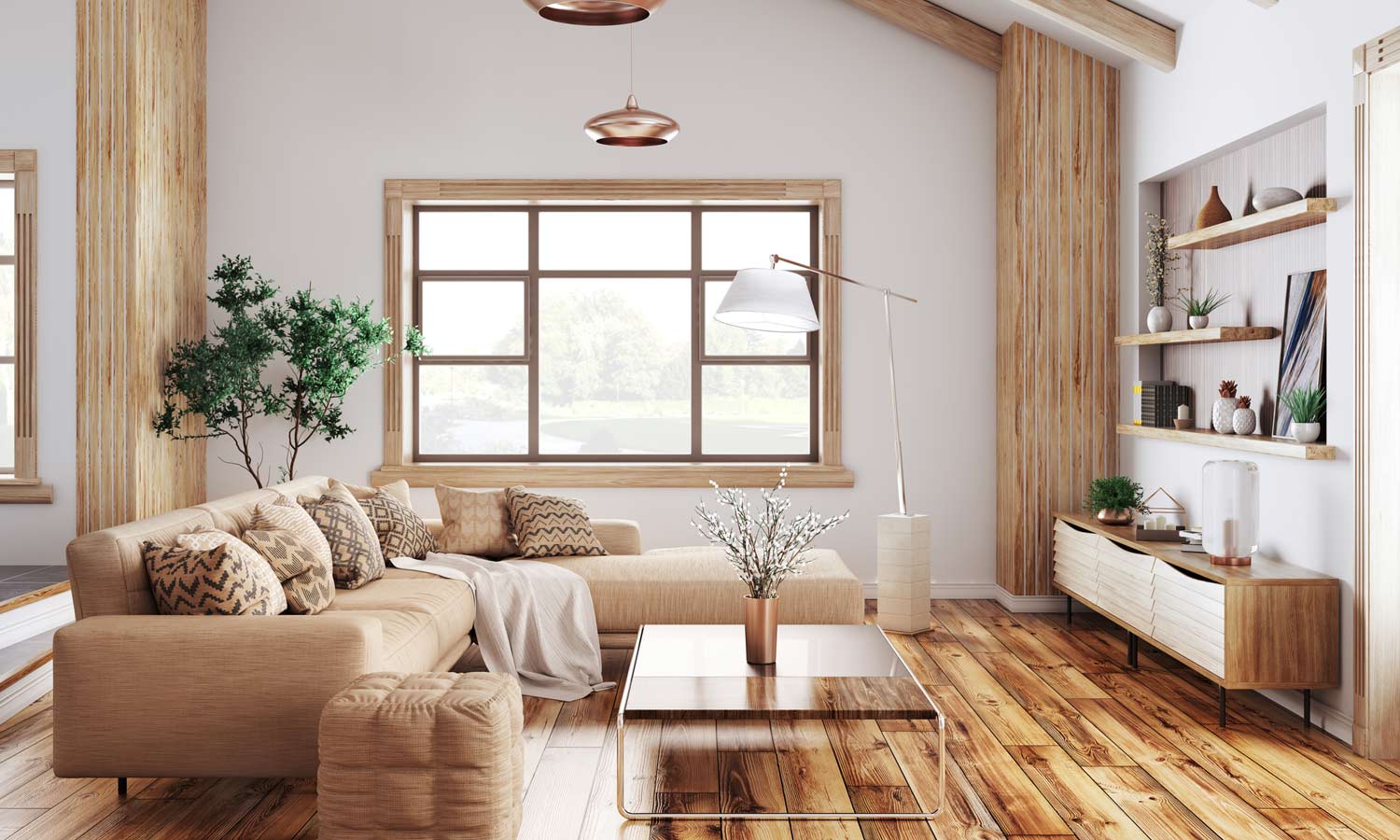 There are still a few roadblocks the industry must face before mass timber can truly take off. Mass timber structures currently require extensive testing and additional permits in the U.S. to ensure their structural integrity. This can add time and costs to a project, causing some developers to avoid using mass timber until more states adopt updated building codes allowing larger-scale projects.

In the meantime, Canada and the U.S. are driving research and innovation to make mass timber more sustainable and affordable. The University of British Columbia houses the Brock Commons Tallwood House, an 18-story residential structure built using mass timber. The university uses this building for student housing while researchers study it to better understand mass timber’s long-term performance.

A 25-story apartment building in Milwaukee, Wisconsin will become the tallest mass timber building in the world when it’s completed in 2022. More record-breaking structures may also be on the horizon, including an 80-story tower proposed by Perkins & Will and the University of Cambridge for Chicago. While this project is still in the proposal stage, researchers could use what they learned during the planning phase to inform future projects.

Mass timber buildings are popping up all over the world, and their numbers will only continue to grow as companies seek out more sustainable construction methods and technologies. Check out the infographic below to learn why mass timber could be the best choice for your next project.

The Anatomy of Earth Sheltered Homes
How to Read Construction Blueprints
How To Operate a Mini Excavator
The History of Concrete
How to Create a Mold-Resistant Home
The 4 Different Types of Construction Contracts
12 Warehouse Layout Tips for Optimization
Free Construction Estimate Templates and How They Work
What Is Commercial Construction?
From Construction Sites to Constructed Housing: Resources for Homeless Veterans