Amazon has come a long way since its first warehouses were built in 1997. Now, the e-commerce giant has hundreds of warehouses for numerous distribution purposes throughout the United States and has even branched out into other countries, such as Canada and Germany.

As of 2021, Amazon’s fulfillment centers average about 800,000 square feet in size. The total number of Amazon warehouses in the United States, both current and confirmed, have amassed approximately 319 million square feet. 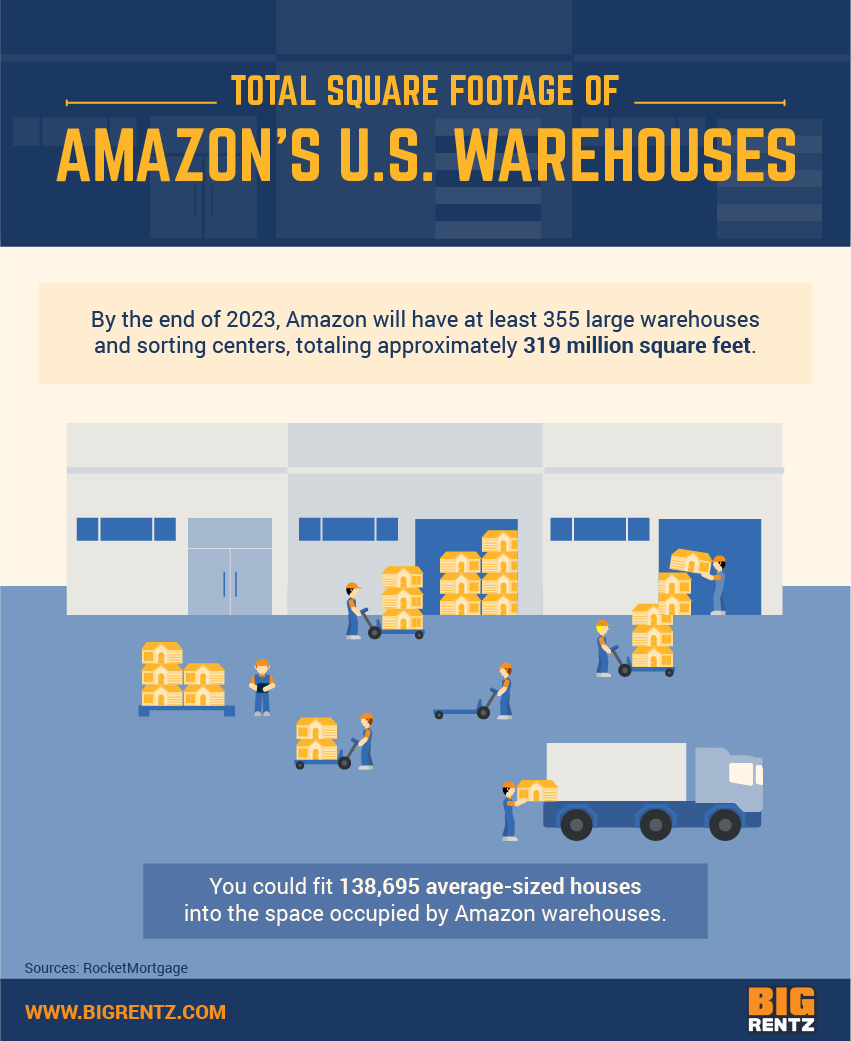 States With the Most Amazon Warehouses

While California has the largest number of any state, the centers are most concentrated in the Northeast, specifically in New Jersey and neighboring eastern Pennsylvania.

As of 2021, California had 35 current or planned warehouses, also called fulfillment centers. Texas, meanwhile, had 28 and New Jersey had 17.

States With the Most Amazon Warehouse Square Footage Per Capita

States With the Least Amazon Warehouse Square Footage Per Capita

The Council Bluffs and Davenport locations in Iowa doubled the existing Amazon presence in the state from two large warehouses in Bondurant to four total large warehouses upon completion of these builds.

States With the Most Amazon Warehouse Space (by Total Square Footage)

California has the most warehouse space, with nearly 32 million square feet, but that space is designed to serve the state with by far the largest population: 39.37 million people as of 2020. Similarly, Texas, the state with the second most square footage of warehouse space, was also the nation’s second-most populous state at 29.36 million. Eight of the 10 states with the most square footage of warehouse space rank among the 10 most populous states as of 2020.

The top three states with the least amount of Amazon warehouse space by square footage, South Dakota, Idaho, and Nebraska, have only one large warehouse or sortation center each. Iowa’s 910,000 square feet is occupied by the two warehouses in Bondurant. Amazon’s colossal expansion can be best seen by Louisiana’s square footage, approximately 2.5 million square feet. These warehouses are all new to the state, with the Carencro location arriving in late 2021, and two others — Shreveport and Baton Rouge — slated to arrive in 2022.

States With No Amazon Warehouses (2021)

While Amazon does have a small presence in the states listed above and has expansion plans announced for Hawaii, they are occupied by smaller warehouses than Amazon’s average distribution, sortation, and fulfillment centers. Amazon boasts several different types of fulfillment centers, such as Prime Now warehouses, Amazon Fresh hubs, Amazon Logistics delivery stations, Flex warehouses, and Prime Air centers.

These tend to be much smaller on average than their larger fulfillment, sortation, and distribution centers, which we compiled for this study. Fulfillment centers range in size from 600,000 to 1 million square feet. To compare, the average size of an Amazon Fresh warehouse is 25,000 to 45,000 square feet. Some of these sites, which are set up like grocery stores, are located inside other Amazon warehouses.

Where Is the Largest Amazon Warehouse Located?

As of September 2021, the answer is Wilmington, Delaware, at 3.8 million square feet. That’s large enough to fit 66.6 football fields inside. The five-story warehouse has a footprint of roughly 640,000 square feet on the ground, which is nearly 14.7 acres. Just that first floor is more than seven times the size of Hearst Castle, William Randolph Hearst’s palatial former home in California.

If the entire 3.8 million square feet were laid out on a single floor, it would encompass more than 87 acres. That’s more than the entire Akron, Ohio, estate of Goodyear Tire founder F.A. Seiberling, a National Historic Landmark that checks in at 70 acres and includes a 64,500-square-foot home.

Amazon has had a presence in Delaware since it opened a distribution center near New Castle in 1997. In fact, its four existing Delaware distribution centers are in New Castle County. The first one, off Frenchtown Road, is smaller than a single floor of Amazon’s new mega-facility, the aforementioned largest warehouse to date, on Boxwood Road in Wilmington.

The population of Delaware in 2020 was less than 1 million people (989,948). That means the Boxwood facility alone has nearly 4 square feet for every resident of Delaware, a state that measures just 1,982 square miles.

Where Are Future Amazon Warehouses Being Built?

Amazon continues to live up to its name with rapid expansion. Its gross merchandise volume (GMV) grew by 41% year-over-year in 2020 while broadening its share of the U.S. e-commerce market to 39%, up from 24% in 2014. It’s expected to deliver 7 billion packages in 2021, a million more than UPS is expected to ship in the U.S. during the year, and it’s on a trajectory to pass Walmart as the nation’s largest retailer in 2022.

With all that growth, it’s no wonder that the company is building more fulfillment centers. And because the growth is so rapid, it’s hard to keep up with Amazon’s plans. Even though this may not be a comprehensive list, the following are locations that have been announced as of this writing, with their estimated completion dates.

How Much Land Is Being Occupied by Amazon Warehouses?

To get a better understanding of how massive the average Amazon warehouse is, it’s almost the same size as Buckingham Palace (830,000 square feet). The total amount of land owned by Amazon with both current and planned warehouses, 319 million square feet, is approximately twice the size of both London Heathrow Airport and Auckland International Airport.

Amazon operates more than 175 fulfillment centers worldwide, with more than 150 million square feet of space, making it a leader in the warehouse industry. This includes centers in the United States and elsewhere, with the majority being in North America and Europe.

Not all of Amazon’s expansion is coming in downtowns or industrial centers. Amazon is spending billions to expand into neighborhoods and suburbs — the plan is to add 1,000 new locations all over the U.S. Putting them in neighborhoods will enable the company to make deliveries more quickly, creating what The Dallas Morning News called something akin to “its own UPS.”

While Amazon continues to grow, there are signs that its sales growth may be slowing in 2021. Amazon plans to add 517 sites to its worldwide distribution infrastructure in the years ahead, or 176 million square feet in addition to its existing 402 million square feet of space. And even with its push to add warehouse space, Amazon is struggling to keep up.

As of April 2021, nine of the 10 largest U.S. warehouses under construction were being built for Amazon. They included a distribution center of 3.8 million square feet in Detroit and other developments of the same size near Syracuse and Austin. The largest, a 4 million-square-foot site, was being built at a cost of $370 million.

In 2020, Amazon’s shipping costs increased by $37.9 billion compared with 2019, continuing a steepening climb in expenses for this category. That’s one indication of the challenges continuing growth poses to the company.

Another may be the number of injuries reported in Amazon’s warehouses. According to one report, workers at Amazon’s warehouses were absent for 46.3 days on average from 2017 to 2020 (based on data from the Occupational Safety and Health Administration). That’s a week longer than the average for the warehouse industry. 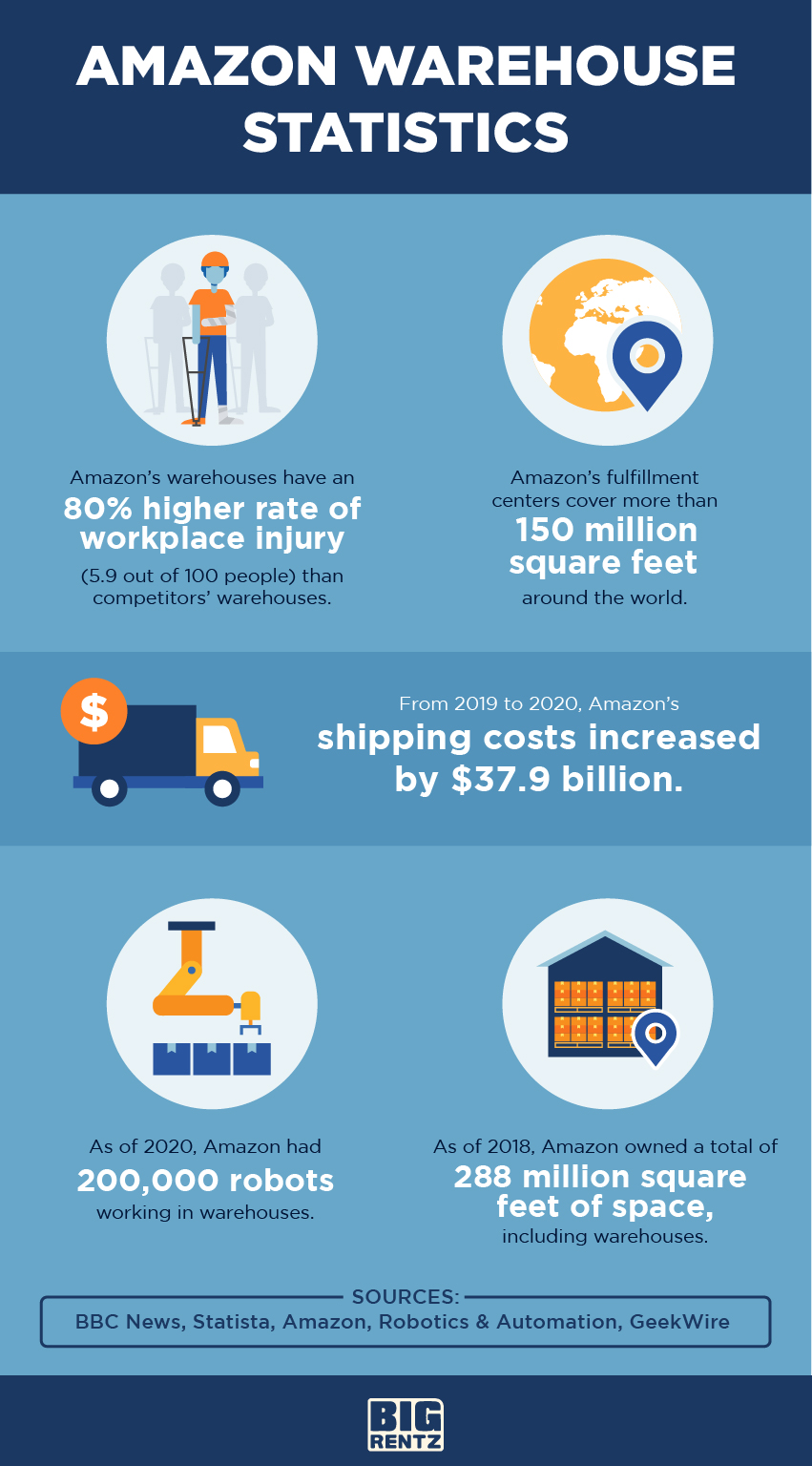 Here are a few other statistics from Amazon’s warehouses:

We used local and national news stories, property records, and public information from real estate databases to compile the total square footage of each location known to be classified as a fulfillment, sortation, or distribution center for the company. The per capita data was compiled using the most recent data from the 2020 United States Census.

For future locations, we used news announcements to gather a list of confirmed locations in 2022 and 2023. For these future warehouses, the land has already been purchased by Amazon or the company is moving into existing square footage on a specific property.

Over the past couple of decades, Amazon has been the leader in transforming the nation’s retail landscape from a brick-and-mortar-based template into a digital model. Perhaps ironically, that has created a need for more brick-and-mortar facilities to store its inventory and serve as distribution points for online customers.

As it enters the third decade of the 21st century, Amazon’s continued growth poses both challenges and opportunities as it continues to reshape the retail landscape. That growth has resulted in the expansion of its warehouse and distribution system, both in terms of large fulfillment centers and an increase in the number of neighborhood inventory and distribution points.

That expansion creates opportunities not just for Amazon and its customers, but for those in robotics, as well as those in the construction industry who are being called upon to build the facilities for the new economy being fueled by Amazon. As the century progresses, the continued evolution of the retail marketplace is likely to open up even more opportunities we have yet to imagine. As it does, Amazon and others will be there to take advantage of them.

16 Motivating Podcasts to Help You Work Harder
How to Build a Life Off the Grid
Survey: Can Americans Recognize a City by the Skyline?
The Psychological Benefits of Green Buildings
How to Design Your Exterior Store Experience
Construction Schedule Template (Free Download)
How to Read Construction Blueprints
How to Become An Early Riser: 25 Science-Backed Tips
What Famous Ancient Structures Would Cost to Build Today
How Construction Exoskeletons Work: An Animated Guide