Air compressors are versatile and vital components of any factory or workshop. They’ve become smaller and less bulky in recent years, making them more usable in various work situations. These are highly useful portable machines that power single air tools.

The main advantage of air compressors is that they’re much more powerful than regular tools, and they don’t require their own bulky motors. Since the only real maintenance that’s required of them is a little bit of oiling, a variety of tools can be powered by a single engine that utilizes air pressure for maximum potential.

Their versatility doesn’t just stop at the workbench for drills or sanders; they can be used for anything from inflating a tire (like the ones at your local gas station) to unclogging the sink at home.

Air compressors are a testament to human ingenuity. It’s important to understand how they work so you can choose the right air compressor for your project.

Air compressors work by forcing air into a container and pressurizing it. Then, the air is forced through an opening in the tank, where pressure builds up. Think of it like an open balloon: the compressed air can be used as energy as it’s released.

They’re powered by an engine that turns electrical energy into kinetic energy. It’s similar to how a combustion engine works, using a crankshaft, piston, valve, head and a connecting rod.

From there, the pressurized air can be used to power a variety of tools. Some of the more popular options are nailers, impact wrenches, sanders and paint sprayers.

There are different types of air compressors and each one has a different specialty. Generally, the differences aren’t too severe: it all boils down to the way a compressor handles air displacement.

How Each Type of Air Compressor Works

There are two methods of achieving air compression: positive and dynamic displacement. Each method has several sub-categories which we cover below. The outcomes are relatively similar, but the processes to achieve them vary.

Positive displacement air compressors force air in a chamber where the volume is decreased to compress the air.

Positive displacement is an umbrella term that describes different air compressors that are power through positive air displacement. Although the internal systems vary among different machines, the method of providing the power is the same. 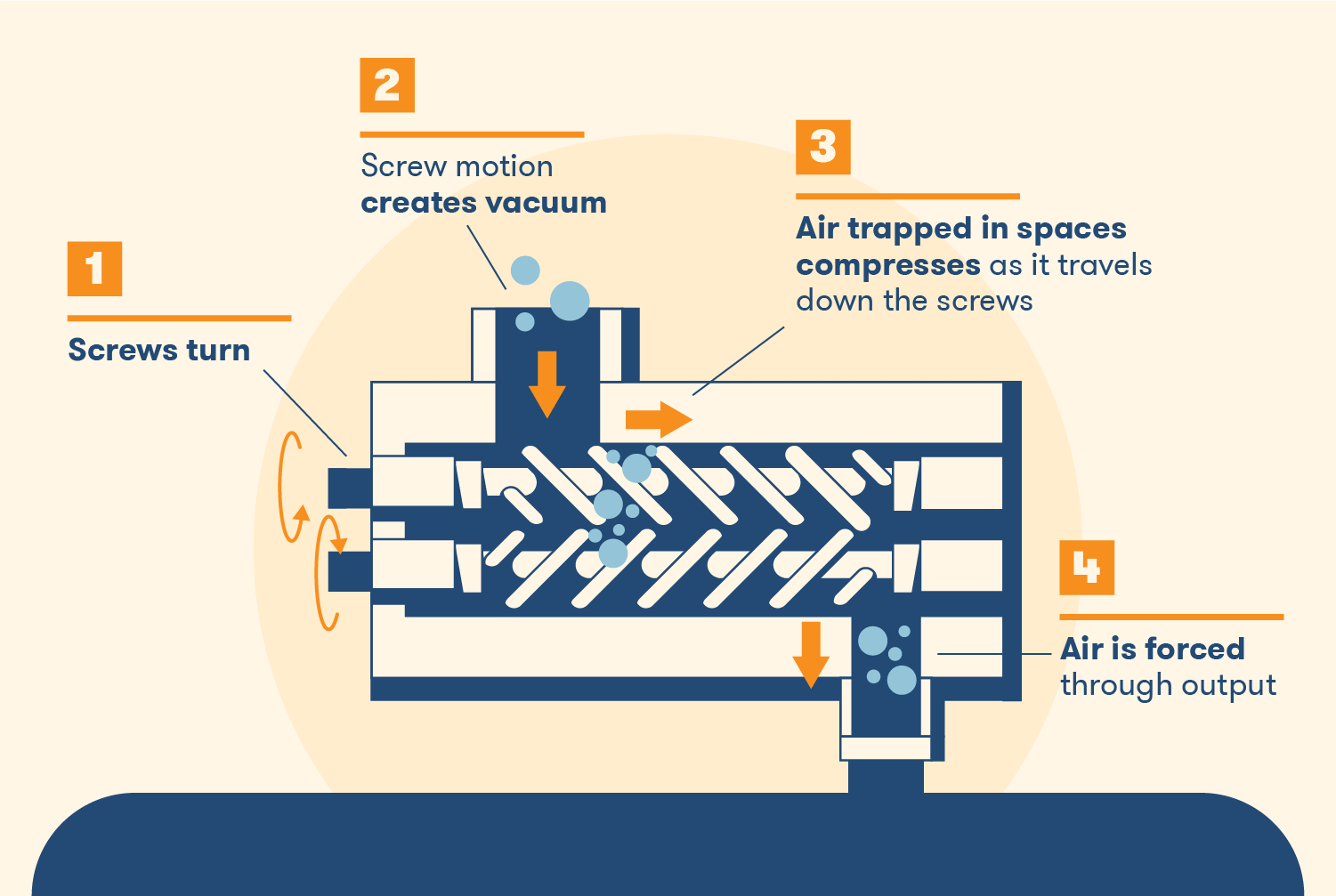 Rotary screw compressors have two internal “screws” that rotate in opposite directions, trapping and compressing air between them. The two screws also generate constant movement as they rotate around.

This is a common type of air compressor and is one of the easiest to take care of. The engines are typically industrial-sized and are great for continuous use. 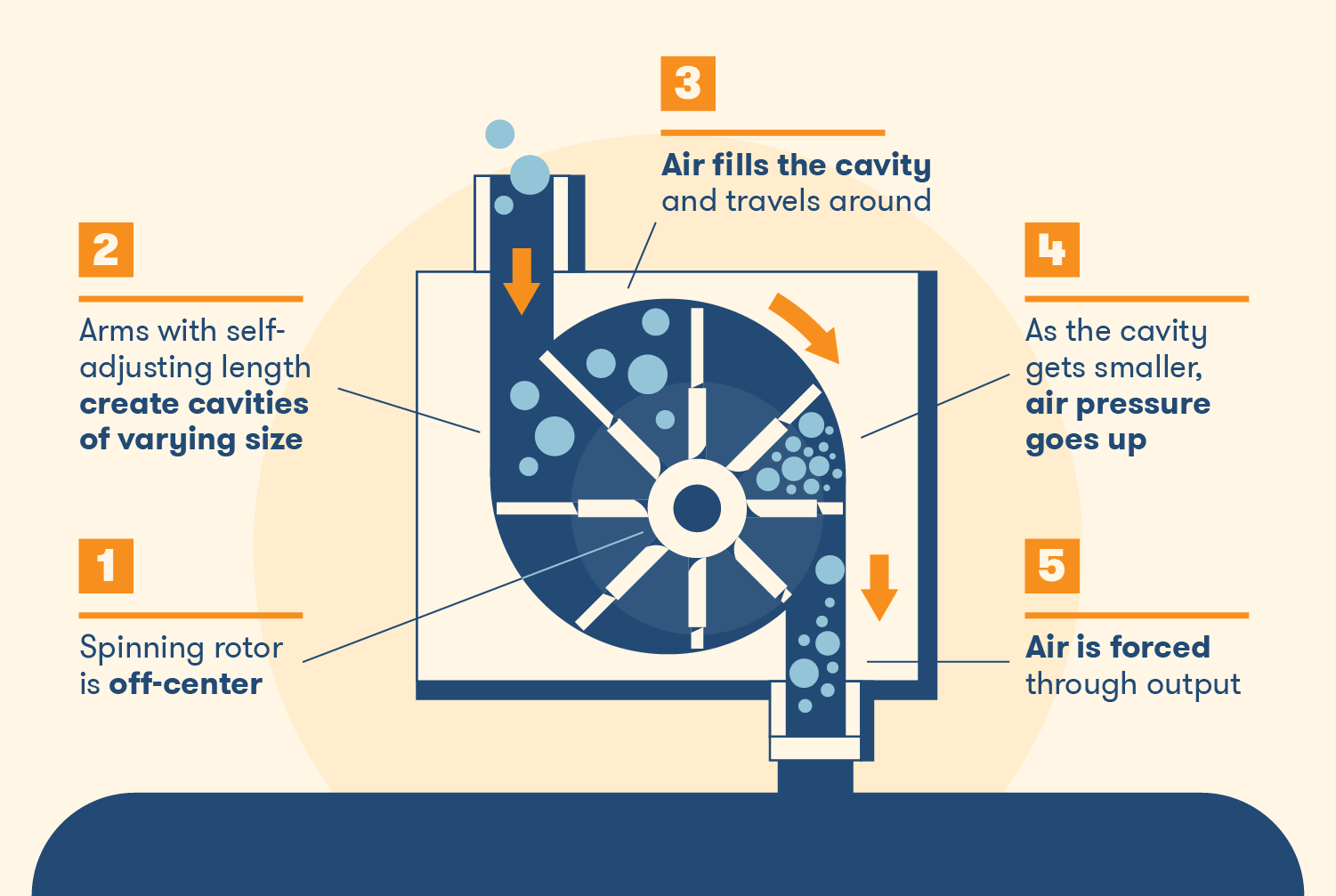 Rotary vane compressors are like rotary screw compressors, but instead of screws, vanes are mounted on a rotor and rotated inside the cavity. The air compresses between the vane and its casing and is then pushed out at a different exhaust port.

Rotary vane compressors are very easy to use, making them very popular for private projects.

A piston (reciprocating) compressor uses pistons controlled by a crankshaft to deliver the gas at high pressure. These are typically found at smaller worksites and aren’t designed for continuous use.

There are two types of piston compressors: single stage and two stage. 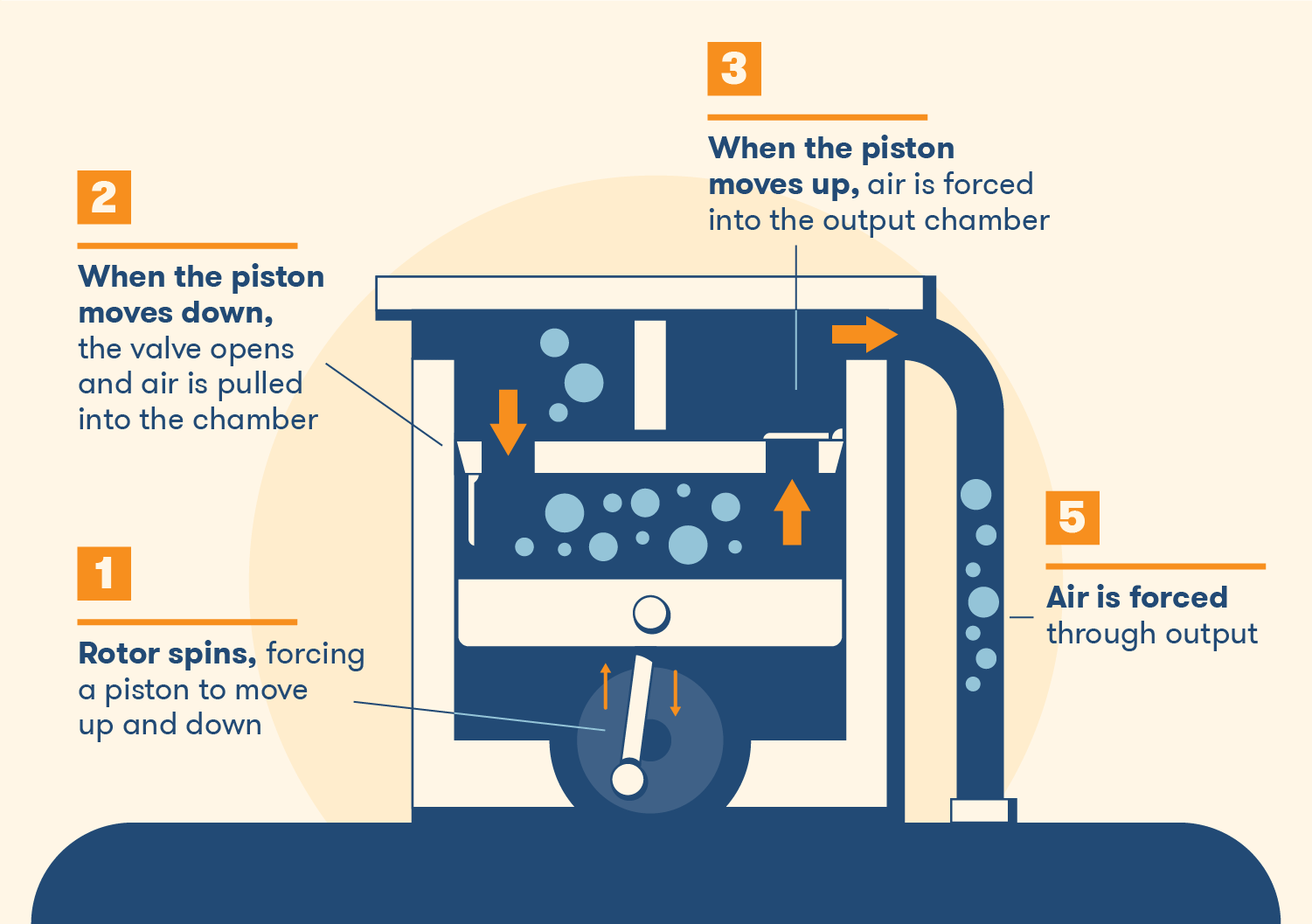 Single stage compressors are relatively affordable compared to the other compressors and are typically easy to acquire; they can be found in almost any mechanic shop. 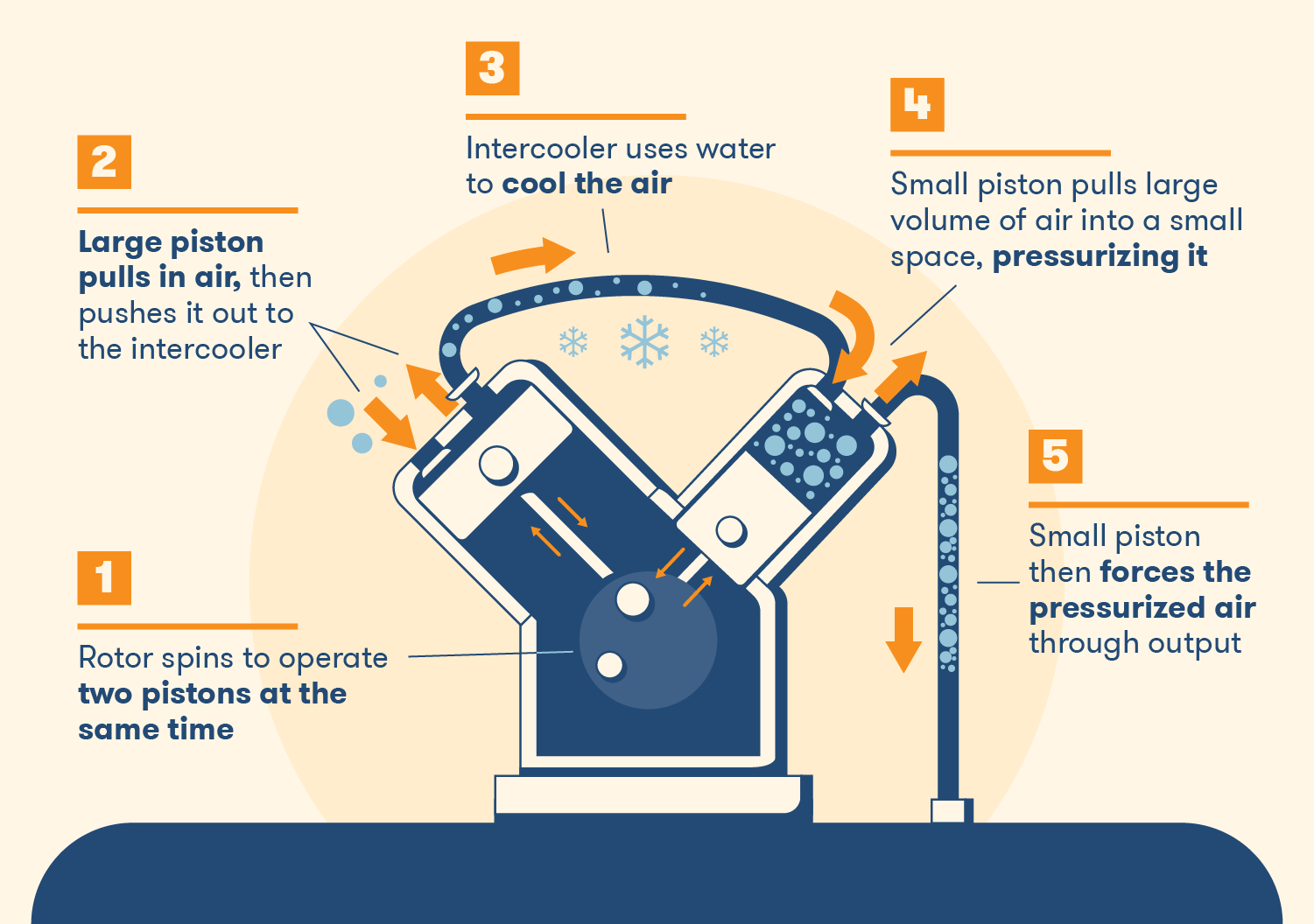 Two stage compressors have two compression chambers on either side of a piston. Double-acting compressors are typically water-cooled by a continuous stream of water through the engine. This provides a better cooling system than other compressors.

Due to their high cost, two stage compressors are better for factories and workshops versus private projects.

Dynamic displacement compressors utilize a rotating blade powered by an engine to generate airflow. The air is then restricted to create pressure, and the kinetic energy is stored within the compressor.

These are mainly designed for large projects, like at chemical plants or steel manufacturers, so it’s unlikely you’ll be able to find one at your local mechanic.

Just like with positive displacement compressors, there are two distinct types of dynamic displacement: axial and centrifugal. 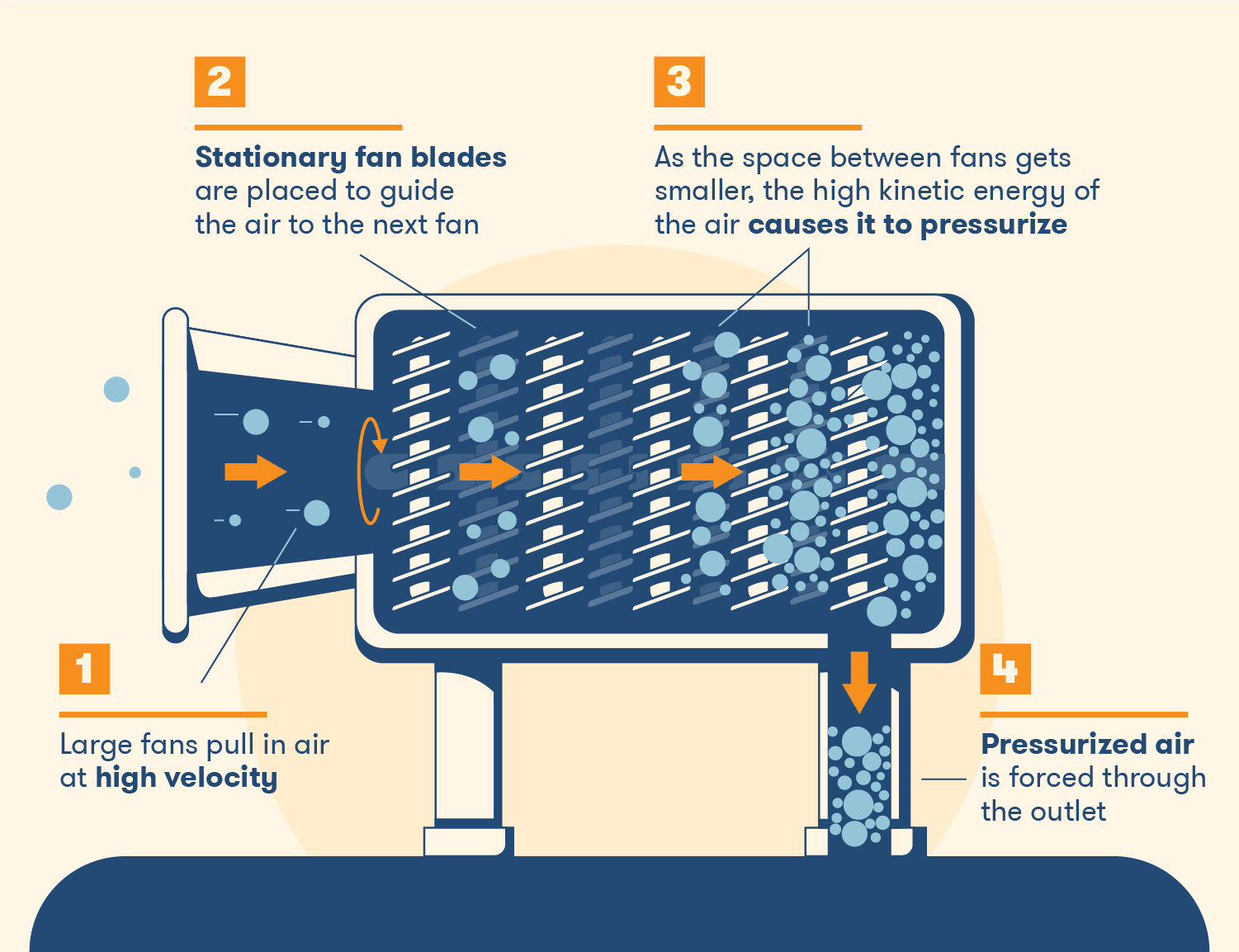 Axial compressors use a series of turbine blades to generate air, forcing it through a small area. Although similar to other bladed compressors, axial compressors operate with stationary blades which slow airflow, increasing pressure. 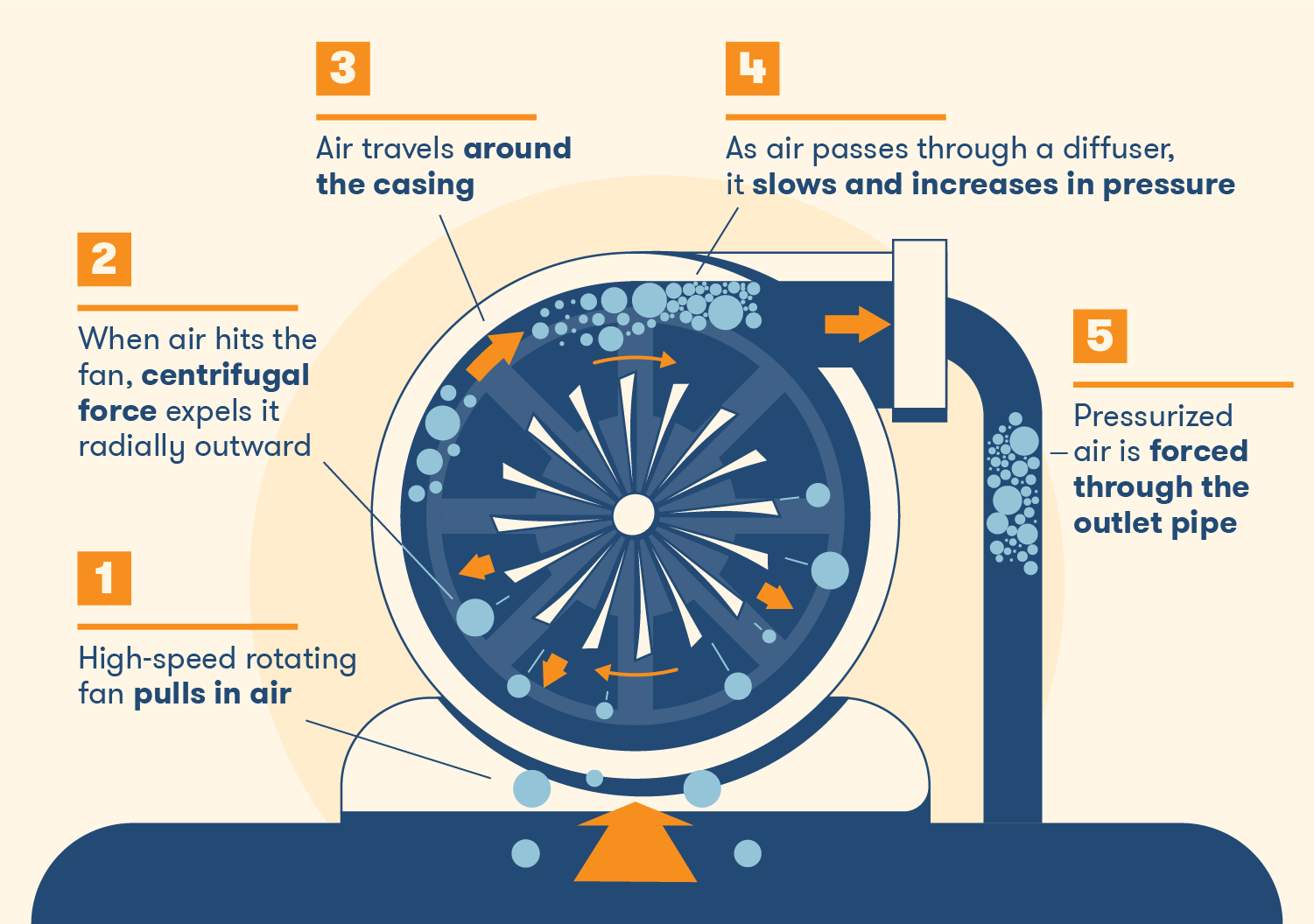 Centrifugal, or radial compressors, work by bringing air into the center through a rotating impeller, which is then pushed forward through centrifugal, or outward, force. By slowing the flow of air through a diffuser, more kinetic energy is generated.

Electric high-speed motors are typically used for these kinds of compressors. One of the more common uses of centrifugal compressors is through HVAC systems.

What Is the Difference Between a Pump and a Compressor?

Sometimes the words “pump” and “compressor” are used interchangeably. They may seem similar but there is a difference between them.

Pumps move fluids between places while air compressors squeeze the volume of the gas and often transport it elsewhere. Any project involving a liquid, like pumping a pool, utilizes a pump. On the other hand, compressed air is utilized for energy to perform different tasks, such as sandblasting.

Understanding that difference between the two terms and methods of distribution can help you figure out what you need for your project.

Air compressors are useful tools in any construction project. From spray painting to fixing a flat tire, they can make a job that much easier. No two air compressors are the same, and finding out how they work allows you to make informed decisions for the project you’re working on.

Cultivator vs. Tiller: Which Tool Do You Need?
What Is a Wheel Loader? Uses, Attachments and More
Backhoe Sizes: Find the Right Fit for Your Project
How to Dispose of Concrete Properly
What is a Boom Lift?
The Science of Demolishing a Building
The History of Concrete
CAT Excavator Size Guide
What Telehandler Size is Right For Your Job?
16 Types of Scaffolding and Their Uses (Plus 2 Alternatives)