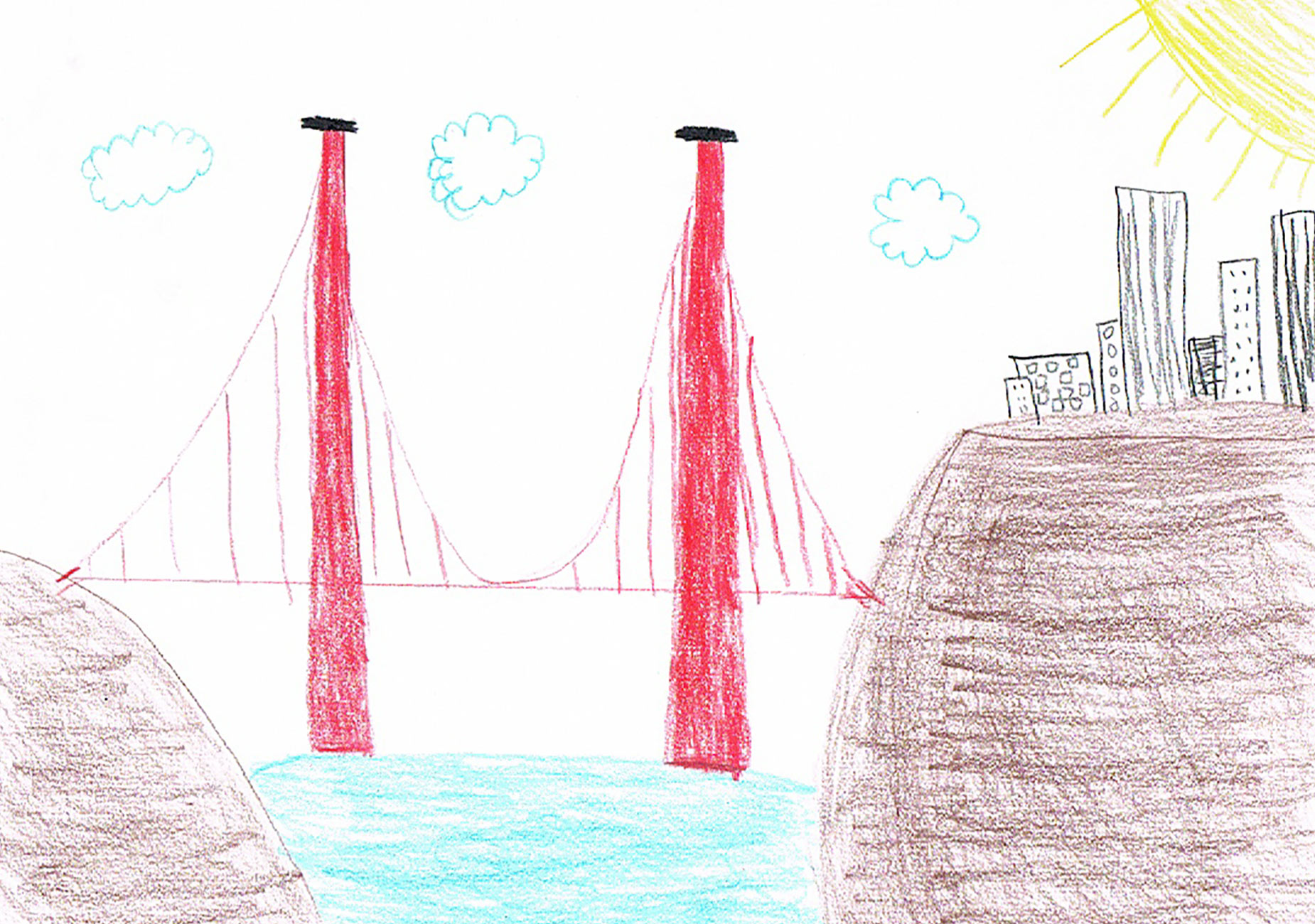 We’ve talked before about how a city’s skylines make a city instantly recognizable. We ran a survey asking Americans if they can recognize a city just by looking at the skyline. The results showed that buildings and geographic features helped make a city’s appearance genuinely unique.

We followed that up with another one asking if Americans can recognize a city after we removed their famous landmarks and structures, to see how recognizable their skylines are. The results showed us that skyscrapers, monuments and natural skylines affect the recognizability of a city.

But what about from a child’s perspective? Do landmarks and city skylines mean that much to children?

To dig deeper, we asked a group of kids to draw their take on famous landmarks. We then had a professional designer reimagine these drawings as realistic structures, and the results are magical.

Check out how each of the most well-known construction projects would look reimagined with a kid’s touch.

Note: To protect their identity and privacy, we’ve removed the children’s names and received written and signed permission from their parents/legal guardians to use the following images.

Located in Midtown South, the 102-story (103 if you count the balcony on top) Art Deco marvel was first built in 1931. It’s a staple of New York architecture and a feature in countless films and television shows, among other works of art.

Here was our first child’s interpretation:

Here’s how it would look fully realized:

This design is an architectural masterpiece and a massive improvement (in our opinion) to the seemingly outdated Art Deco style of the original. To make this fantastic design into the reality we see here, the same methods that typical skyscrapers are built might not work.

Extra support would be needed to handle the new shape of the building. Typically skyscraper spires are constructed in parts, but a new method may be necessary to build this one, especially considering the spheres separating the spire.

Perhaps the biggest challenge would be the multiple domes on top of the building. The spire could be used as a sort of large pin that goes through all three domes to keep into place, but that itself would require a reinforced steel spire that may be too heavy to stay on top.

There is a solution, however: graphene. Graphene is a futuristic building material that is lighter and stronger than steel. Using this building material for the Empire State Building’s redesign makes sense as it can become a new testament to the future.

The Golden Gate Bridge is one of the most famous landmarks of San Francisco, and possibly California. It’s named after the fact that it spans the Golden Gate, a strait that connects the San Francisco Bay and the Pacific ocean. The bridge opened to the public in 1937 and has withstood multiple accidents and natural disasters, like the Loma Prieta earthquake.

Here was the drawing that the kid artist created:

This reimagining probably won’t withstand an earthquake, but it doesn’t make it any less marvelous. It represents a brighter and clearer future.

This new design of the Golden Gate Bridge also thins out the bottom portion. Although it would appear that it would collapse if there were too many cars, self-healing concrete may fix the problem.

Self-healing concrete is a new construction building material and is exactly what it sounds like: concrete that heals itself. It uses water to activate bacteria that heals concrete. Best of all, it has a 200-year lifespan, meaning the artist was looking into the future on how we can improve construction projects.

Considered one of the world’s largest sculptures, Mount Rushmore depicts four faces of U.S. presidents — Washington, Jefferson, Lincoln and Theodore Roosevelt. They were chosen by the sculptor, Gutzon Borglum, due to their contributions to the country. The sculpture was completed in 1941 and has become an icon of America since then.

Now, for the Mount Rushmore as imagined by a child:

To make this new design a reality, massive changes to the structure need to be made. For one, Jefferson’s face would need to be drastically extended, and Roosevelt’s mustache would have to be moved.

What may be complicated would be Lincoln’s bust. His beard would clearly need to extend to twice its current length, especially since the rock surrounding the faces isn’t suitable for carving. Likewise, a new masonry method may have to be invented to achieve the curl atop his head.

A daring challenge, to be sure.

Due to the alterations needed to make this a reality, it would take a lot of time and money. The original sculpture took 14 years and cost $989,992.32 to make, so it may take just as long to edit the features.

It’ll be worth it, though.

The Space Needle opened in 1962 during Seattle’s World Fair and has been a staple of the city, state and Pacific Northwest since then. Its futuristic design was inspired by the idea of humanity’s aspirations in the Space Age. At 605 feet tall, the Needle is one of the most photographed objects in history.

This Space Needle from the child took a fresh look:

Here’s how it would look fully-realized:

To make this new design become a reality, and still respect Seattle’s skyline, it may be better to recreate the Space Needle on an asteroid in space. The original Space Needle cost $4.5 million; moving it onto an asteroid would undoubtedly cost more, and Seattle may never look the same again.

Although it may seem impossible, space construction is already a reality. And with the abundance of minerals in space, remaking the Space Needle could happen. It’s an ambitious project, but it’s one that can become a reality.

The Statue of Liberty is an icon and national treasure that was gifted to America from the French in 1886. The iconic blue/green figure depicts the Roman god of liberty, Libertas, and holds a torch above her head. The statue has become a symbol of freedom and liberty throughout the entire world.

Here is the child’s version of Lady Liberty:

Here’s how it would look fully-realized:

The artistic representation, taking a surrealist approach to Lady Liberty’s design, should now be dubbed The New Statue of Liberty for the modern world. The star in her hand represents how liberty, shining bright, can be in the hands of all who seek her.

The removal and readjustments to the Statue of Liberty are doable, although it may be easier to replace Lady Liberty with this new design. It costs $6 million annually to maintain the statue. By removing and replacing the iconic figure, you can bet it would cost more.

Out of all the redesigns in this post, the New Statue of Liberty may be the most feasible. The brick foundation and a sculptor dedicated to their craft can make this become a reality.

We received many more submissions, so much more that we couldn’t reimagine all of them as we did with the others. Each submission is fantastic and should be celebrated as a statement to the creativity of the children.

In that spirit, we wanted to share the other submissions we received. Check them out below!

The Statue of Liberty

If you’d like to see how your kids view the world, have them draw their dream home in one of our construction themed activities for kids. Also, for more imaginative renderings, check out our abandoned spaces reimagined. And when you go to change your own home to better fit your child’s crayon-filled blueprint, make sure you have the right construction equipment. Just make sure you support the structure properly, in case they make it a little too top-heavy.

The State of America's Infrastructure
Lean Construction: Principles Shaping the Future of Construction
Easy-to-Use Construction Bid Template (Free Downloadable)
The Construction Risk Management Guide
How to Build an Epic Ninja-Style Obstacle Course in Your Backyard
Sensory-Friendly Home Modifications for Autism and Sensory Processing Disorder
The Psychology Behind Building and City Design
How to Read Construction Blueprints
The World’s Most Innovative Mega Construction Projects
What Is a Building Envelope and Why Is It Beneficial?
Construction Share this article:

We are currently rebuilding our checkout system and apologize for any inconvenience.

To order all equipment at once, please call (888) 325-5172.
Processing...
×
Enter jobsite location to see local rates:
Use Current Location