Retainage 101: What Contractors Must Know 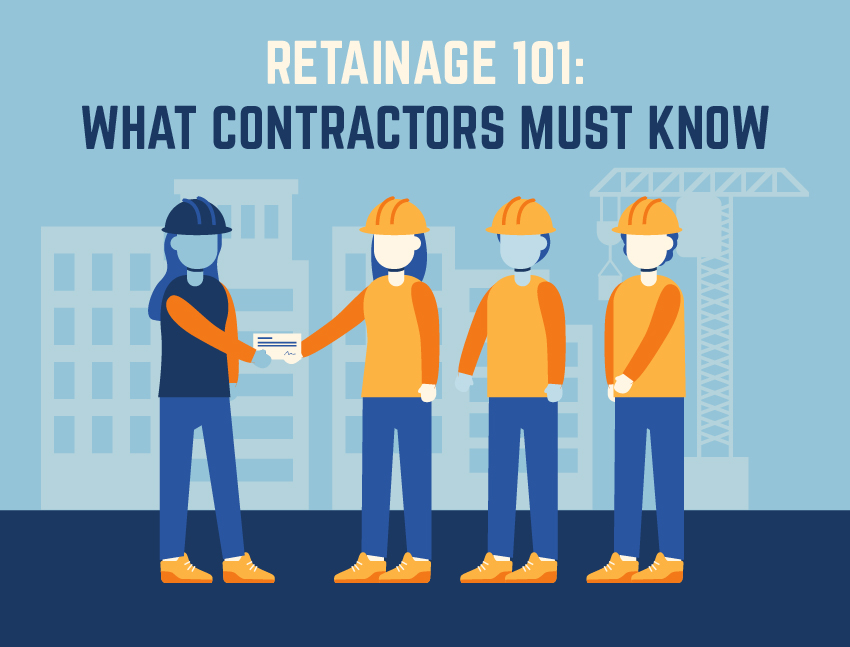 The construction industry is full of specialized guidelines and procedures. Everything from determining milestones to transferring funds must be defined in a construction contract. Contracts provide the fundamental legal and financial framework of a project. In most projects, this framework governs the speed of completion. Retainage is one of the terms that can determine how and when a project is completed.

For general contractors, retainage details are often some of the most significant. These details govern milestones and allow for continued work on the project.

Therefore, workers in the construction business need to understand the ins and outs of retainage to ensure prompt payment for their hard work on the job.

Retainage, sometimes known as “retention,” is the payment amount withheld from contractors and subcontractors until the construction project’s end. This retention can vary in amount, and it can also depend on contractual milestones such as substantial completion. 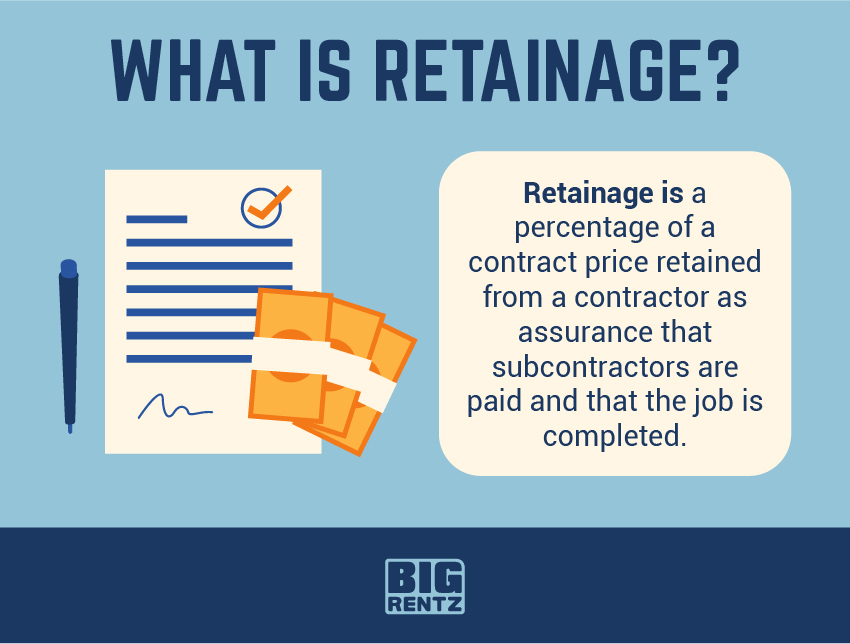 How Does Retainage Work?

Retainage is a standard aspect of the construction industry. In practice, retainage should:

However, retainage isn’t always seen as a positive feature of construction. Client decisions can hamper payment, and retainage can limit the funds contractors have to make needed purchases. This can cause severe project bottlenecks.

For example, if the funds aren’t available for materials or equipment rental, it can slow down the entire project timeline. Subcontractors also have to deal with retainage, and funds are often released much more slowly from contractor to subcontractor than from the client.

Retainage is often clouded by contractual terms and construction lingo. Sometimes this is done to hinder the payment of retainage. This is why insisting on clear contracts is so important. Retention agreements are binding. They must be clear in every contract for the project, and they must include all contractors and subcontractors involved.

Different federal and state laws govern retainage. These laws vary by type of project, location, and even by municipality. They were once designed to keep contracts fair. Today, retainage adds extra complexity to the process.

Retainage can be applied for specific projects and specific conditions. Private projects are more likely to include retainage. Larger or longer projects with more at stake will often include milestone-based retainage.

Finally, contractor reputation can often hold the greatest weight. Contractors who are more well known might not be subject to strict retainage terms. The same is true for those that have done work for a client before. Likewise, new contractors or those with a poor work history often find their projects have higher rates and retainage lengths.

How Is Retainage Calculated?

State laws often cap the amount of retainage between 5% and 10% of the contract amount. These laws are often for public projects, but some states have private retainage laws. These averages were determined by a study at Clemson University:

Private projects aren’t limited by these caps, but contractors will often pass on projects with problematic retainage language. This often forces private projects to more or less follow the industry rates. 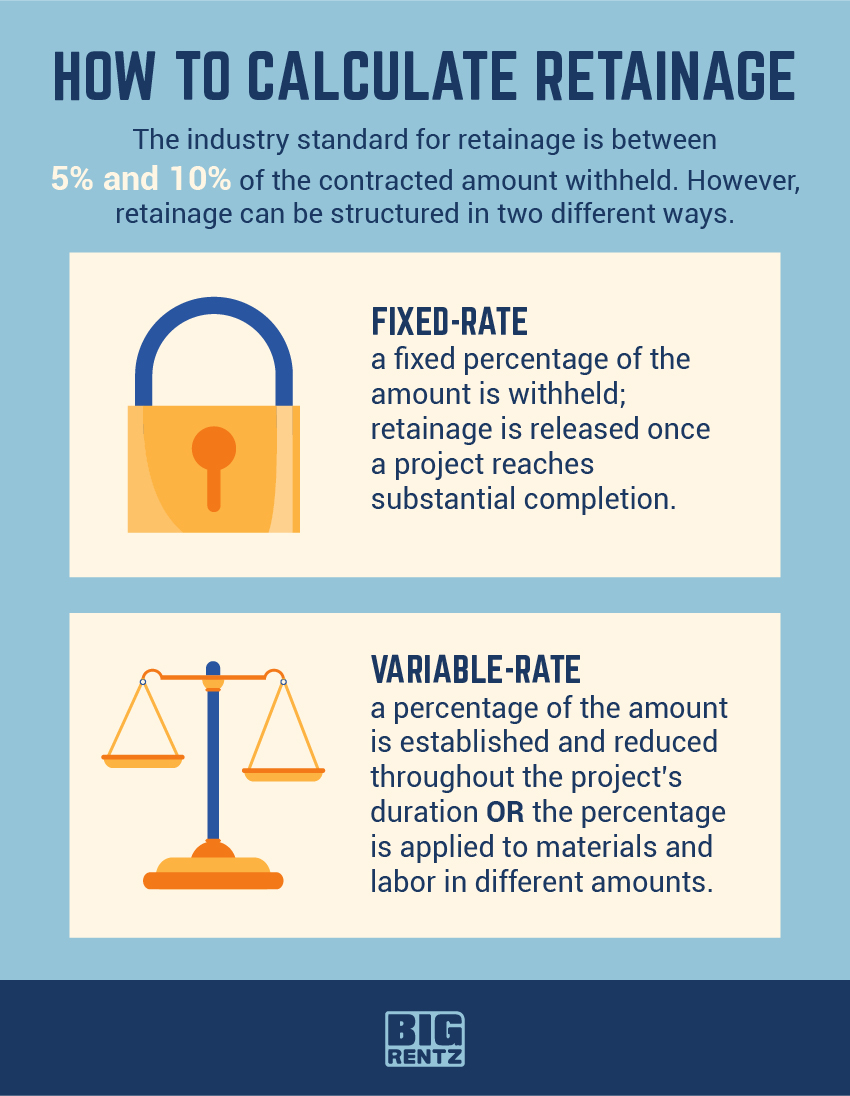 The amount of withheld retainage is another detail specified in the contract. These values can be static dollar amounts regardless of project specifics, but they are often determined as a percentage of the projected contract value.

For public projects, the retainage percentage usually ranges between 5% and 10%. Private projects can be any percentage. So, all contractors must be sure to understand a contract before agreeing to a project.

If stated in the contract, withheld percentages can also change throughout the project. This is often used to encourage work on the client’s terms. In such cases, retainage terms will be kept low at the beginning. This incentivizes sound and speedy completion. But, if milestones aren’t being met on time, the retainage terms can increase.

The opposite is also true. Rates can decrease as a reward for on-time or ahead-of-schedule completion.

How Long Is Retainage Held?

Various factors can determine retainage holding length, but most retainage stipulations are based on milestone completion. This often includes how many milestones there are and client satisfaction for each milestone.

However, some projects may hold retainage until the project reaches substantial completion. Others might even demand funds are released at the end of the project. In some instances, clients can stipulate that retainage can be withheld indefinitely, even beyond the date of completion. Clients often do this to have a built-in satisfaction assurance.

Subcontractors tend to have more negative issues with retainage than contractors. They are almost always on hand for only specific portions of a project. As such, they are often left waiting for milestones or total completion before they are paid. For this reason, subcontractors often include early release clauses in their contracts. Some have even turned to digital employee time clocks to track work time and milestone completion.

When retainage is released is determined by the client. As it can be withheld, it can also be released early. All terms must be stated in the contract to be valid. As such, it is often prudent to negotiate to ensure the fairest retainage terms.

Retainage laws vary from state to state, and these variances span a range of requirements. There are federal guidelines for federal public construction projects, but there aren’t any federal laws governing private retainage.

This is left for states to govern. And there aren’t many commonalities between the states’ retainage laws. This holds true for both public and private construction. Contractors and subcontractors must ensure they understand the wording of every project contract.

Federal retainage laws govern federal projects through the Federal Acquisition Regulation. It states that a prime contractor can withhold retainage from subcontractors, but they can’t bill the government for that retainage. So, until the retainage is cleared, contractors won’t be paid for federal jobs.

The federal government also tends to stand by retainage only being used when there is cause. In addition, that cause has to be determined for every contract and contractor. With each case, the government can make that determination based on contractor performance history.

The Federal Acquisition Regulation caps retainage at 10%, but this is only to be enacted if the contractor hasn’t made “satisfactory progress.”

It is important to remember that these regulations only impact federal contracts. There aren’t any federal laws that govern public state works or private contracts.

Most differences in retainage come from different state laws. Each state sets its own retainage terms and rate limits. States can also make other stipulations. For example:

There are similarities in retainage laws across the states, but there is nothing federally mandated. In short, state retainage laws are unique to each state and thereby influenced by the unique state statutes and laws.

Each state can govern retainage as much or as little as they see fit. Often, there are distinctions between public and private projects.

Public projects almost always include term and rate limits, and repayment requirements are also often included. Private projects are not always governed by any laws. Some states have laws in place for private retainage; others govern retainage by existing laws and legal references.

As an example, South Carolina ensures contractors release funds to subcontractors within seven days of primary payment. This is done via the state’s Prompt Pay Act. Though it isn’t a retainage-specific law, it does govern retainage.

Most contracts have clauses that limit various contractual obligations. These are often based on project completion and satisfaction. Specifically, the substantial completion milestone is usually held as the time that retainage is released. As the majority of the work has been done, the majority of the funds should be released.

However, clients can state dissatisfaction with a project to avoid paying a determined price. Clients have disputed contract obligations to extend time frames. And contractors have been known to withhold retainage due to subcontractors. Many times, the money due is never paid at all.

In other words, this legislation has limited clients’ ability to abuse substantial completion milestones. This helps contractors and subcontractors ensure they are paid for their work.

Mechanic’s liens, also known as construction or property liens, are legal documents that ensure someone’s right to payment. Contractors and subcontractors file them after not receiving the payment due. Suppliers can also file them for the same reason.

All contractors and subcontractors should understand their lien rights. A lien’s main purpose is to grant a security interest in the property to those who have done the work. Filing a lien on a non-paying property will hinder the property owner’s ability to use the ownership of the property. Lenders see lien claims as risky investments. Often, they will refuse to refinance or work with properties with liens against them.

Liens are important tools of construction risk management. They can be filed by contractors and subcontractors. Both circumstances will lead to the client’s property being affected. When a subcontractor files a lien, it will affect the prime client, even if the subcontractor only worked for the prime contractor. This is done to force settlements, as it gives power to those who have done the work.

Lien laws are specific to individual counties across the country. Specific policies will be different based on different county clerks. In addition, there will still be state laws governing liens. These can include:

Liens are often used when retainage hasn’t been paid as stipulated in the contract, and they are used in addition to suing for breach of contract. Liens can stay with a property even after a change in ownership. In this way, liens force entities to respond at the risk of being refused financing, buyouts, or growth.

Liens can be a powerful tool to cut nefarious retainage and substantial completion abuse.

Pros and Cons of Retainage 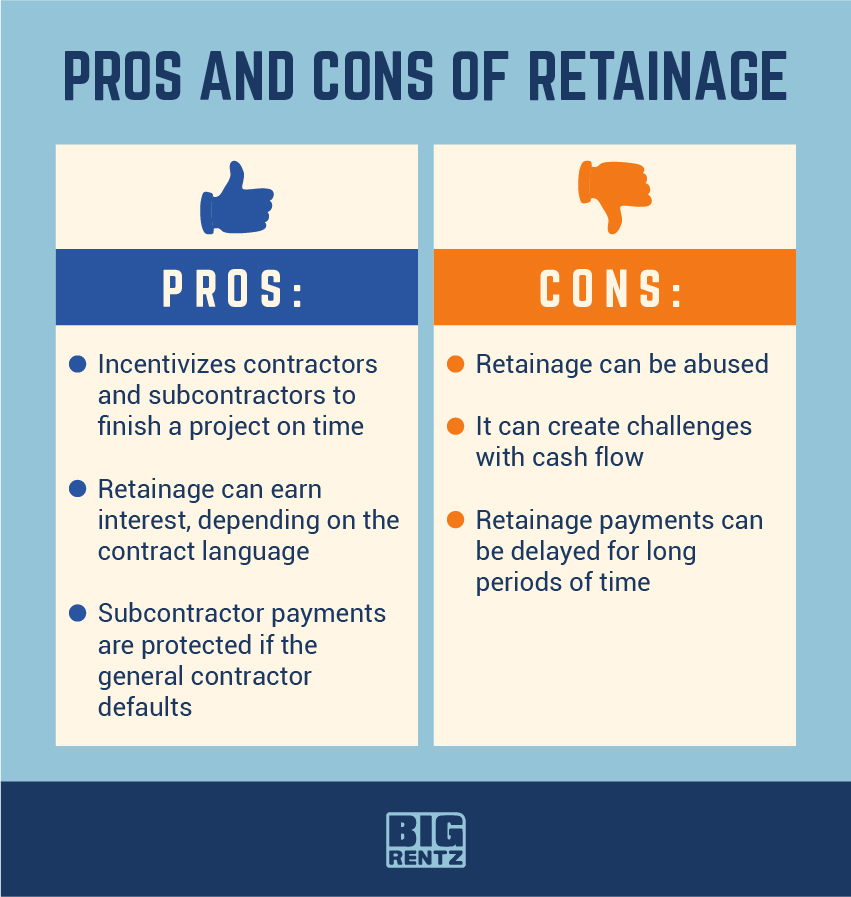 Retainage has been around for almost two centuries. Paying for construction projects upfront isn’t always possible, nor is it a sound decision. By guarding against shoddy and incomplete work, retainage can protect clients and their money.

Retainage benefits from sound contracts and clearly stated milestone terms. This protects contractors through the mandated release of retainage and prompts them to finish projects per established roadmaps.

But, over the years, both sides of the contract have abused retainage. Many subcontractors are against the practice. Retainage funds are usually slow to arrive beyond the prime contractor. Retainage-oriented state legislation is occurring across the nation to address these negative aspects.

When used correctly, retainage protects clients and provides a financial incentive for contractors.

In short, retainage protects client investments and ensures contractors are paid for jobs done well. But, all too often, these same terms can be abused by both parties.

For all that it can help, retainage often brings plenty of hardships. These include:

Clients can and have used retainage tactics to avoid making payments. Every contract should include ironclad retainage sections. They must state a release of retainage at specific milestones and they must list the penalties for not doing so. Both parties’ requirements must be equally evident. Otherwise, there will be a threat of abuse.

Retainage is a heated term within the construction industry. It is defined as the act of withholding funds to ensure project completion. But its description is already indicative of mistrust, and it can often lead to slow and missing payments, especially for those farther down the hierarchy, such as subcontractors and suppliers.

To ensure fairness, retainage terms must be clearly defined in every contract and subcontract. When handled properly, retainage promotes financial safety, fairness, and sound project completion for clients and contractors.

American Wasteland: Which States Produce the Most Trash?
Commercial Construction Cost Per Square Foot in the U.S.
How to Understand Floor Plan Symbols
Lean Construction: Principles Shaping the Future of Construction
What Are Floor Joists and How Do They Work?
How Earthquake-Proof Buildings Are Designed
7 Science-Backed Ways to Stay Safe While Working in the Cold
How to Design a Net Zero Energy Building
The Science of Hurricane-Proof Buildings
Construction Estimate Template (Free Downloadable PDF, DOC, EXCEL)
Construction Share this article: