What Is a Shear Wall? We tend to think of walls as components that hold things up (like roofs) or provide barriers for privacy or safety. But a shear wall, also known as a structural wall, has a different function.

Unlike a load-bearing wall, which holds things up by transferring the compression of a load downward into the foundation, a shear wall keeps a building from collapsing sideways.

It does this by resisting uneven settlement loads or lateral forces caused by wind, earthquakes, or other severe weather. These things create twisting, or torsional, forces that can lead to the failure of a building’s structural system.

A shear wall system uses cantilever action that prevents a building from moving sideways, a kind of movement called “lateral deflection” that can cause swaying. And because strong winds produce shear and uplift at the same time, improperly designed structures may be vulnerable to blowing over, especially taller ones.

This structural member is reinforced with a concrete frame so that it resists wind and other lateral forces such as seismic activity. Walls built primarily to withstand heavy winds are likely to have different specifications from those designed to resist seismic forces.

Shear walls can be built into structures during construction or added as part of retrofit projects to improve stability against lateral loads. Either way, the wall construction should be strong and stiff enough to resist seismic loads and/or lateral winds. Shear strength should be adequate to resist deformation.

Whether retrofit or new construction, a shear wall project may require the use of multiple types of construction equipment such as an excavator for digging or a crane for moving heavy materials. Such a project also requires an engineer and supervisors on-site.

How Do Shear Walls Work? 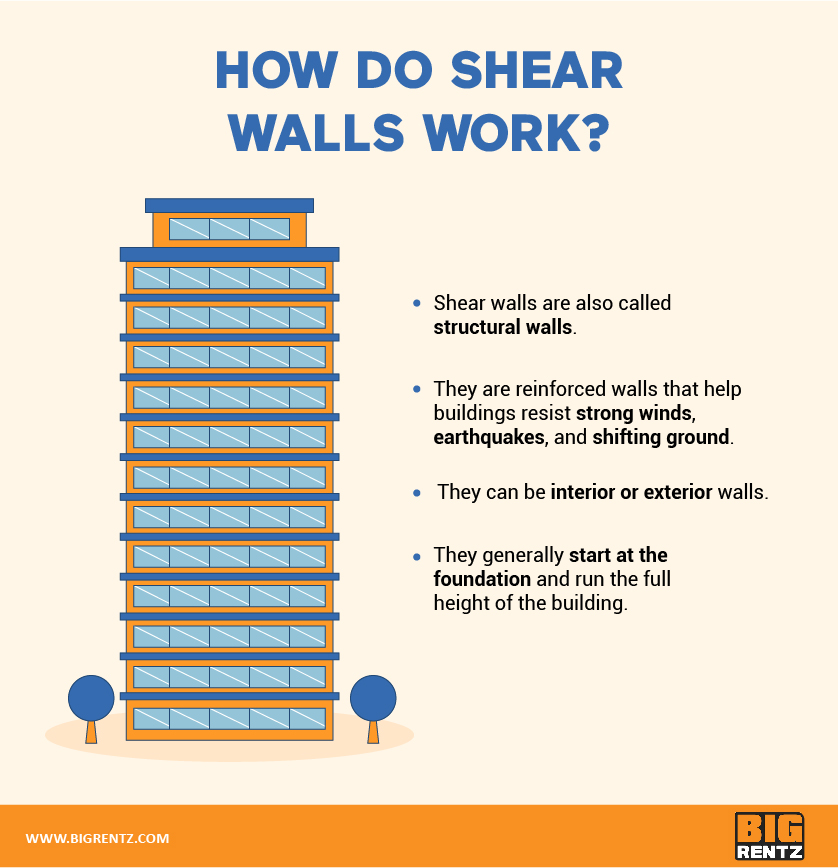 To withstand lateral forces, shear walls must be secured by braces. They’re usually pierced by openings and connected to beams or slabs, typically at the foundation.

These pierced openings are called “coupled shear walls” since they act together as one continuous wall. They provide support against lateral forces, acting as a brace and providing support for the structure in which they were built.

Axial compression and flexural stress must be considered in the design phase. Wall thickness can vary depending on the wall length, spacing, and height of the structure or the number of stories and other factors. 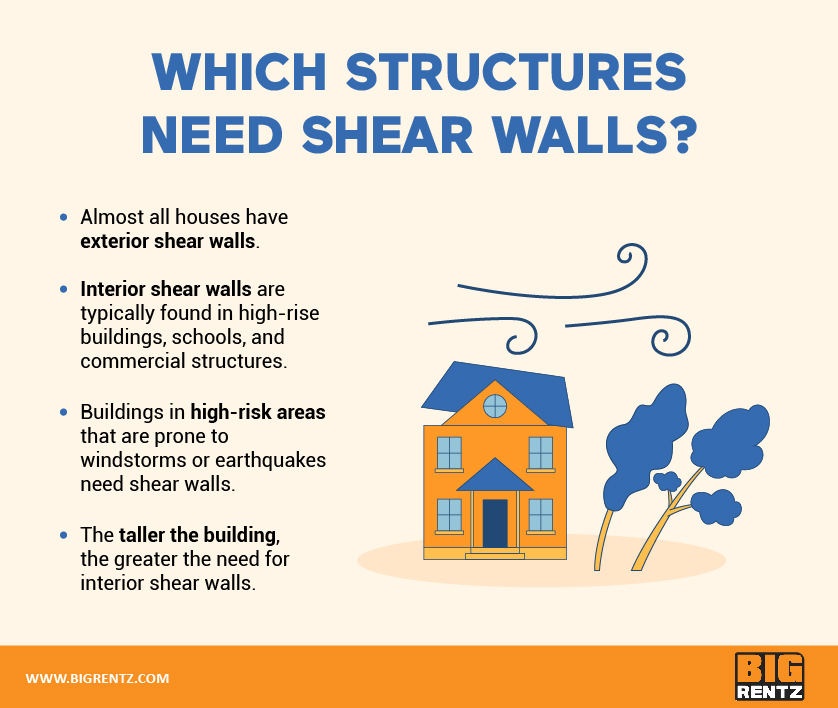 Structures that need shear walls include high-rise buildings or structures in areas with high wind, such as Chicago, or seismic activity, as in Los Angeles or San Francisco. They’re also used in commercial buildings, schools, and houses.

In regions where high winds or earthquakes are common, building codes are likely to require a shear wall in the design of a structure so it can resist a certain level of lateral pressure and motion.

Location of Shear Walls in Buildings

Structural engineering dictates that the best place to locate a shear wall is in the center of each half of a building. They work best when placed symmetrically within, or around, a building’s central axis point.

If this is the case, then the next best option is placing a shear wall on one end of the building and another directly opposite on the far side of the building. 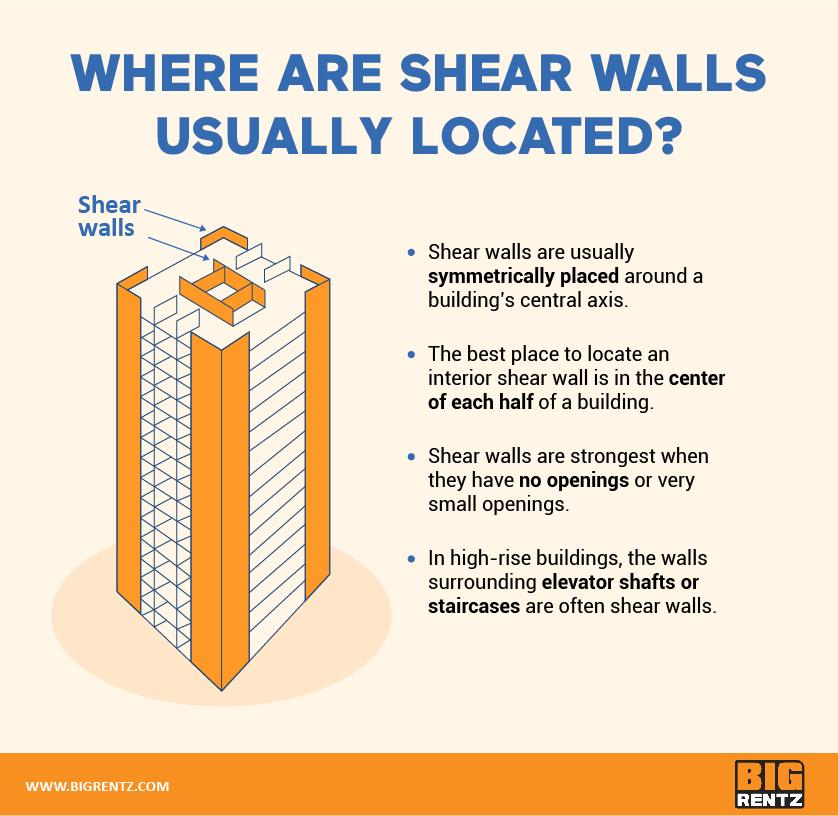 The taller the structure, the greater the need for internal shear walls. Structural engineers determine what’s appropriate and necessary for each specific building’s location and maximum exposure to lateral forces.

Internal walls may be necessary for bigger houses, high-rise buildings, or tall structures to withstand seismic forces, as these forces tend to impact buildings more aggressively. For these structures, core walls, like box-shaped columns, often are placed around a building’s stairwell, elevator, or both.

Inner shear walls also create limitations, however, since they divide space. So when it’s practical, they are often located along the exterior walls at both ends of the building. Most homes have external shear walls.

Following the principle of symmetry around a central axis, L-shaped shear walls can be placed at four corners of the building. Again, this symmetry is important for balance and maximum protection against shear force.

Shear wall materials fall into one of several categories:

Other structural elements may include diagonal braces within a structure, which provide additional support, and moment frames, which are similar to shear walls but can accommodate a door or window.

Hold-down anchors at the base of a shear wall can help brace it. Hold-downs are placed at intersecting corners at each end of the wall. Nailing structural panels to the framing helps resist shear in the wall sections, and anchor bolts work to prevent base shear.

Sheathing boards are wall panels that act like a sheath covering a blade, strengthening the assembly and providing external protection against penetration by wind or water. Exterior wall sheathing is usually plywood or oriented strand board used to fortify a wood frame wall. It’s shown on blueprints as a narrow line running alongside a thicker line (the shear wall).

Shear walls are integral to stabilizing homes and commercial buildings. Location, construction, and type of building determines the necessity for a shear wall. Structural walls like these are best built for houses, schools, commercial structures, taller buildings, and buildings in areas that are prone to earthquakes and windstorms.