States Where the Most Home Development is Happening Rumors of a housing boom are abounding, but are they accurate? We’ve analyzed U.S. Census data to determine where the most building permits are being approved and what types of homes are being constructed.

In May 2021, the National Association of Home Builders’ NAHB-Wells Fargo Housing Market Index, which measures builder confidence in constructing single-family residences, showed a score of 83 points. This is up from just 37 in May of 2020. The 2021 score is one of the highest ever.

The increase in scores accompanies more construction of single-family units. A lack of resale inventory, low mortgage interest rates, and a growing pool of home buyers are among the driving factors for the increased confidence and growth in construction, according to NAHB Chairman Chuck Fowke.

After looking at the overall picture of housing development in the United States, we went on to see which states are seeing the biggest portions of the growth in the industry.

Where States Are Seeing the Most Home Development

In this state, the cost of living is 7.8% lower than the national average, the crime rate is 25% lower, unemployment is the 6th-lowest in the U.S., and the typical home value is $389,218. Idaho has six national parks. With these stats, it’s no wonder that this is the state seeing the most move-ins.

Colorado’s 42 state parks and four national parks make it a favorite for lovers of the outdoors. It’s also easy on the budget, with utilities 17.3% cheaper than the national average, and incomes 17.4% higher.

South Carolina saw a 593.47% increase in permits issued during the study period. With its low unemployment rate, slightly lower than average unemployment rate, and housing costs 12.4% lower than the national average, South Carolina is a magnet for those who want to reduce their costs of living. Home values, however, are also lower – 29.9% less than the national average.

Where States Are Seeing the Least Home Development

We found these states the same way we found the ones with the most development: we looked at the total permits per capita by state, with a date range of 2015 to 2020. Even these states saw increases.

A 0.57% increase in permits per capita puts Rhode Island in the list of those with the least new development. There were 1329 new units in 2020, and 7285 during the studied period.

The cost of living, unemployment, and home value are all higher than average, and it takes longer to build a home here – 13 months from starting. Yet, home values are rising; they’re up 16.3% year-over-year.

Housing costs here are 48% higher than the national average, and the cost of living is 25.7% higher than average. Also, unemployment is 48% higher. Yet, Connecticut has managed to eke out a 0.74% per capita increase in permits issued between 2015 and 2020.

A 0.49% increase in permits per capita earns West Virginia a spot on this list. Housing and utility costs are lower than the national average, but this is offset by higher unemployment and lower average income. Only 224 total new units were built in 2020.

An increase in permits per capita of just 0.85% puts Illinois among the states with the least new development. Compared to the rest of the U.S., it has a higher violent crime rate and a high unemployment rate.

It also has high taxes, with local and state sales taxes adding up to 11% in some areas. Some parts of the state also see 40″ of snow per year.

Next, we looked at US Census data from 2019-2020 to see which states had the most growth in total units during the pandemic.

Vermont saw a 56.58% increase in permits issued during the study period. It has one of the lowest unemployment rates in the nation. People also feel safer there – 78% feel safe, compared to a national average of 42%.

South Dakota showed a 55.07% increase in permits issued. It has the fifth-lowest unemployment rate in the country and the 26th-lowest cost of living.

There was a 32.38% increase in permit requests from 2019 to 2020. Low housing costs and a low unemployment rate may have contributed to Montana’s popularity.

A 31.09% increase in permits shows that North Dakota’s low unemployment rate, low housing costs, and slightly lower-than-average cost of living are attractive to many.

Permit issuance increased by 29.87% in Delaware. The median household income is 6.8% higher than the national median, and housing costs slightly less than average.

COVID-19 caused many people to move between states last year. As with new housing builds, there were winners and losers. Here is a quick rundown of the states that saw the most activity.

Idaho, Arizona, and South Carolina were the top three gainers during the highest time of the pandemic. Lower costs of living in these states, Arizona’s sun, and Idaho’s low crime rates are among the possible reasons.

California, New York, and Illinois had the most people moving out of them. New York’s extremely high housing costs and poorly-rated hospitals; Illinois’ high snowfall levels, high taxes, and high crime rates; and California’s high taxes and high housing costs are among the suspected reasons. California and New York were also reported to have some of the most draconian lockdown measures for COVID-19.

The number of permits requested has risen steadily since 2015, and even COVID-19 did not stop this trend. An increase of 33% year-on-year is expected for 2021.

So far this year, the states requesting the most permits overall are Texas, Florida, California, North Carolina, and Arizona.

Building materials have risen steadily in cost, as well. Even so, this doesn’t seem to be affecting the increase in construction. 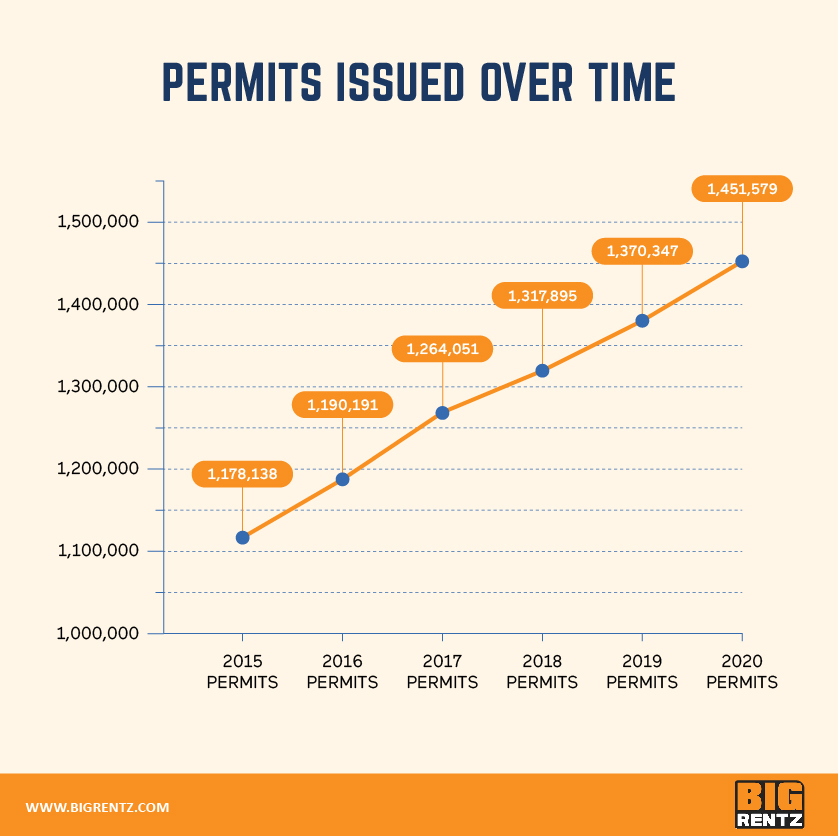 These statistics show that when deciding where to live, cost, safety, and weather all come into play. Winning states have lower costs, higher safety, and more sun. Meanwhile, losing areas are expensive, perceived as dangerous, and have a lot of snow.

Since these factors are hard or impossible to change quickly, it’s a good idea to make sure that investment or construction plans take them into account.

We used data from the US Census Bureau’s Building Permits Survey to determine the number of permits being approved between 2015 and 2021 and New Residential Construction to calculate the average time of authorization to start and length of time from start to completion. We also relied on the US Census Bureau’s 2020 Census Apportionment Results to calculate units per capita. We received data on Producer Price Index by Commodity: Lumber and Wood Products: Lumber from FRED Economic Data.

Easy-to-Use Construction Bid Template (Free Downloadable)
CAT Excavator Size Guide
12 Best Cities for Construction Jobs in 2022
What Is a Genset and How Is It Used?
Home Building Checklist: What You’ll Need At Each Step
The State of Mental Health in the Construction Industry
Mass Timber: Is Wood the Future of Sustainable Construction?
Comparing the Best Mini Excavators on the Market
What Is Trenching?
15 Interesting Construction Facts