What Is a Skid Steer? 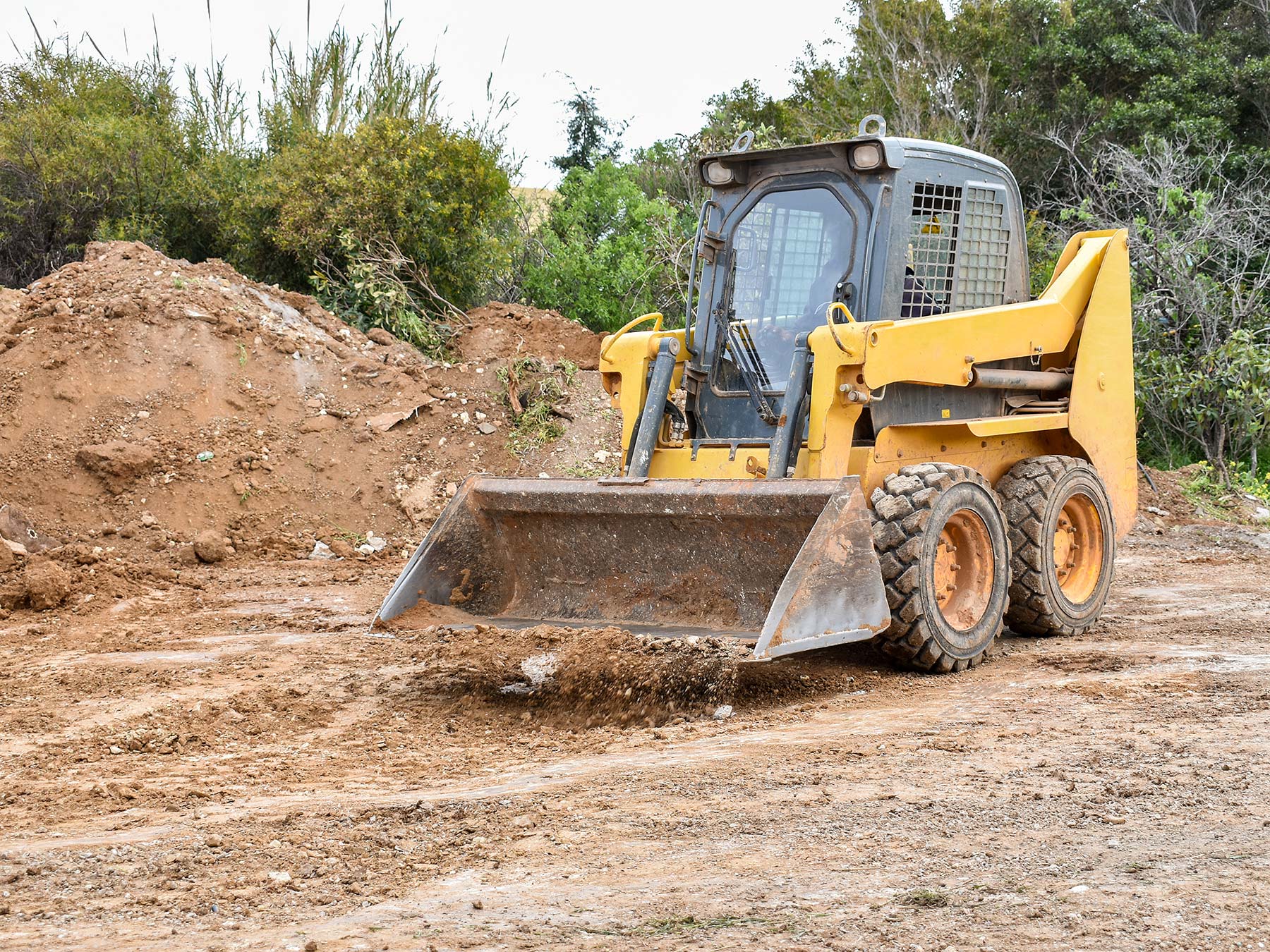 A skid steer is a small, versatile piece of construction equipment used primarily for digging. It’s light and maneuverable, and its arms can attach to a range of tools for various construction and landscaping jobs.

The skid steer will either have four wheels or two tracks. The front and back axles of each side are locked in synchronization with each other but can be operated separately from the wheels on the opposite side of the machine.

The wheels hold a fixed straight alignment and do not turn. To turn the machine, the skid steer operator must increase the speed of the wheels on one side, causing the wheels to skid or drag across the ground as the machine rotates in the opposite direction. This steering function is what gives the machine its name.

What Is a Skid Steer Used For?

The bucket can also be used for clearing snow, or in more serious winter conditions an operator may opt for a snow blower or snow blade attachment

A skid steer is also capable of excavation work, thanks to attachments like a ripper, tiller, trencher, or wheel saw.

For building and construction work, the machine can be outfitted with a cement mixer or pavement miller.

Finally, and perhaps most popularly, the skid steer has a variety of digging attachment options like the backhoe, trench-digger, and auger (which operates like a corkscrew to burrow a precise hole).

In almost any worksite scenario, there is an attachment that makes the skid steer a useful choice for any task. It’s important to ensure that you or your hired skid steer operator are up-to-date on the specific safety and maintenance guidelines for both the skid steer itself and the attachments you use for each project.

How Much Does a Skid Steer Weigh?

There are a few different sizes of skid steer, each of which works better for different types of jobs.

The small-frame model is lighter and more maneuverable in tight spaces, making it the best choice for interior work, landscaping, and site development.

A medium-size skid steer is often used with its various attachments to function as a backhoe or digger in places where those machines would not fit. Since the medium-frame skid steer is lighter than traditional demolition equipment, it can be equipped with tires or tracks and driven over asphalt or concrete without damaging the surface.

Large skid steers can be used for extensive demolition and excavation work. Whereas many large-scale demolition machines need to be transported by a semi-truck, the wheel loader is capable of performing many of the same excavation tasks while still able to maneuver independently about the work site.

There are many guides available to help you figure out which skid steer is right for your project, or you can talk directly with a professional supplier.

What’s the Difference Between a Bobcat and a Skid Steer?

Should You Buy or Rent a Skid Steer?

Whether or not you should buy a skid steer depends largely on the size and frequency of your projects. Keep in mind that you’ll need to make the same decision about the attachments, which can be bought or rented separately.

If you find that you use a skid steer on almost all of your projects, it may be worth investing in a machine of your own. However, keep in mind that equipment ownership incurs costs of its own — your skid steer will need maintenance and upkeep, which can total over a thousand dollars yearly. You’ll also likely need different attachments for various jobs, each of which will cost several thousands of dollars and require maintenance of their own.

If your skid steer usage is less frequent, it likely makes more financial sense to rent one. You can prorate the cost in order to make sure you’re only paying for the time you need, and you can avoid the hassle of buying an attachment you may only use once.

The best way to figure out exactly what size, type, and rental period you need for your project is to speak with a professional that can assess your specific needs and get you the equipment that works best for you.

Generator Amperage Chart: kVA and kW to Amps Conversion
How to Recruit Skilled Workers: 13 Proven Tactics
Why You Should Dig a Trench Using a Rototiller
The Anatomy of a Smart City
Skid Steer Size Charts: Choosing the Best Fit For Your Site
How to Stay Healthy When You're Standing All Day
What Are Floor Joists and How Do They Work?
Types of Pallet Jacks
16 Types of Scaffolding and Their Uses (Plus 2 Alternatives)
Backhoe Sizes: Find the Right Fit for Your Project

What is a Trencher? 6 Common Uses

How to Use a Pallet Jack: A Step-by-Step Guide