Electric construction equipment isn’t a new concept. Hybrid electric machines have been available for years, and all-electric models of excavators, loaders, forklifts and other heavy machinery are currently available to rent or buy all over the world. Read on to learn more about the benefits of electric construction equipment and the types of machines making waves in the industry. 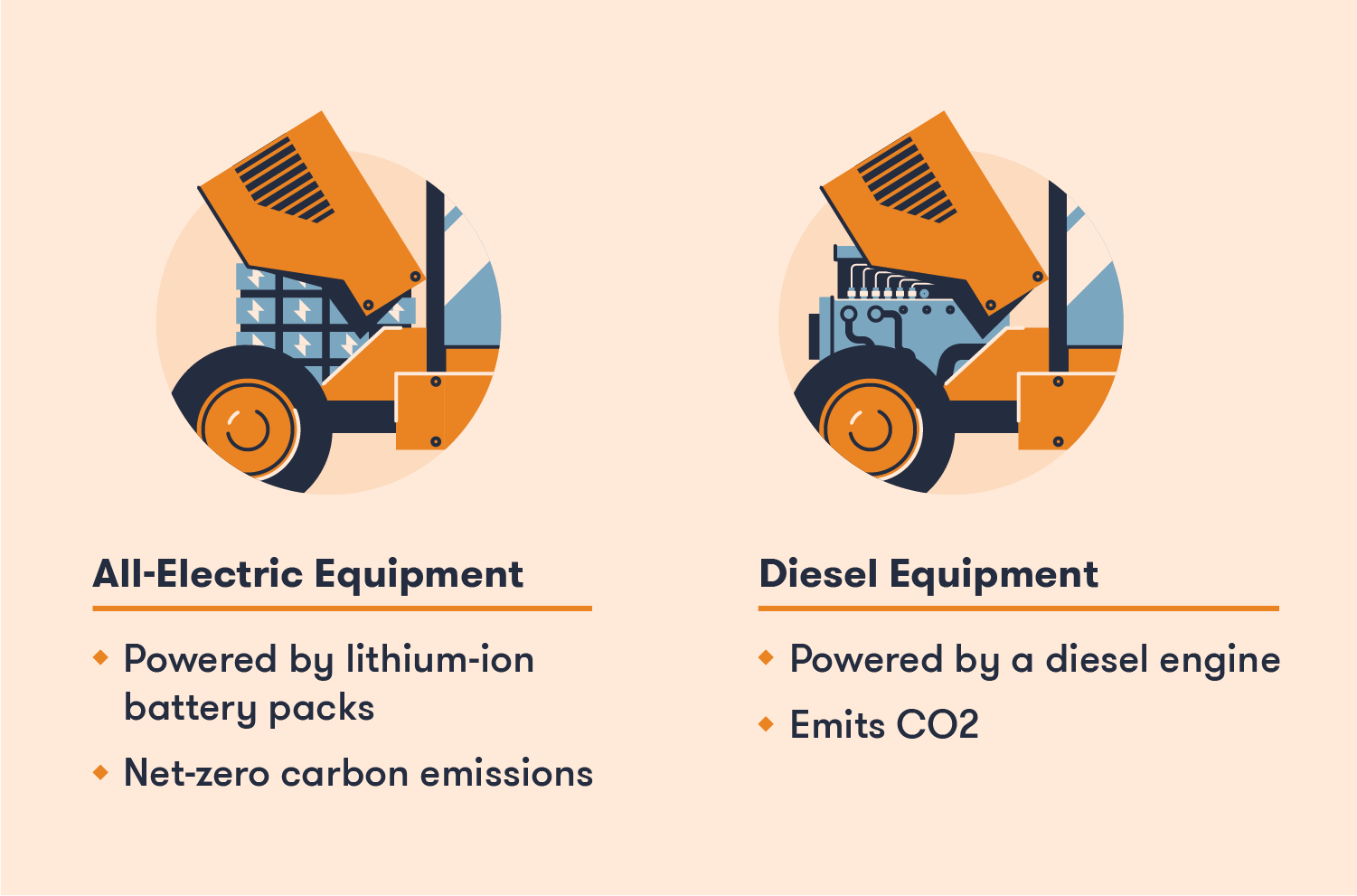 If you’ve ever passed an active construction site, most of the heavy machinery you saw was likely powered by diesel fuel. While diesel-powered construction equipment is still overwhelmingly dominant in the U.S., all-electric models are becoming more prominent than you might think — and they tend to blend right in.

When it comes to overall performance capabilities, all-electric equipment is almost identical to its diesel counterpart. Volvo CE, for example, reported that its electric excavator and wheel loader specifications are the same as their diesel versions. The only differences include a marginally higher operating weight and a small increase in continuous motor power for their electric equipment.

The biggest differences between electric and diesel equipment can be found under the hood. Instead of containing a diesel engine and cooling fan, electric equipment contains rechargeable lithium-ion battery packs. Some electric equipment also lacks the traditional hydraulics systems found in their diesel counterparts. Volvo CE’s ECR25 Electric excavator, for example, uses electromechanical linear actuators to power the boom rather than hydraulics.

Hybrid Electric Equipment: How Does It Work?

Hybrid electric equipment combines the power density of a diesel engine with the emissions-cutting capabilities of a battery. It contains a smaller diesel engine alongside a rechargeable battery and electric motor, making it ideal for both high-intensity jobs and locations that require low emissions.

Hybrid drives still burn diesel fuel, but they can recover and reuse energy that would otherwise be wasted as heat. This allows for a smaller cooling system and creates a more efficient machine. In fact, Volvo CE’s LX1 hybrid 20-ton loader is 50% more efficient than a 25-ton conventional diesel loader.

Transitioning to all-electric equipment benefits construction companies and the environment in more ways than one. The top three advantages of electric heavy machinery include: 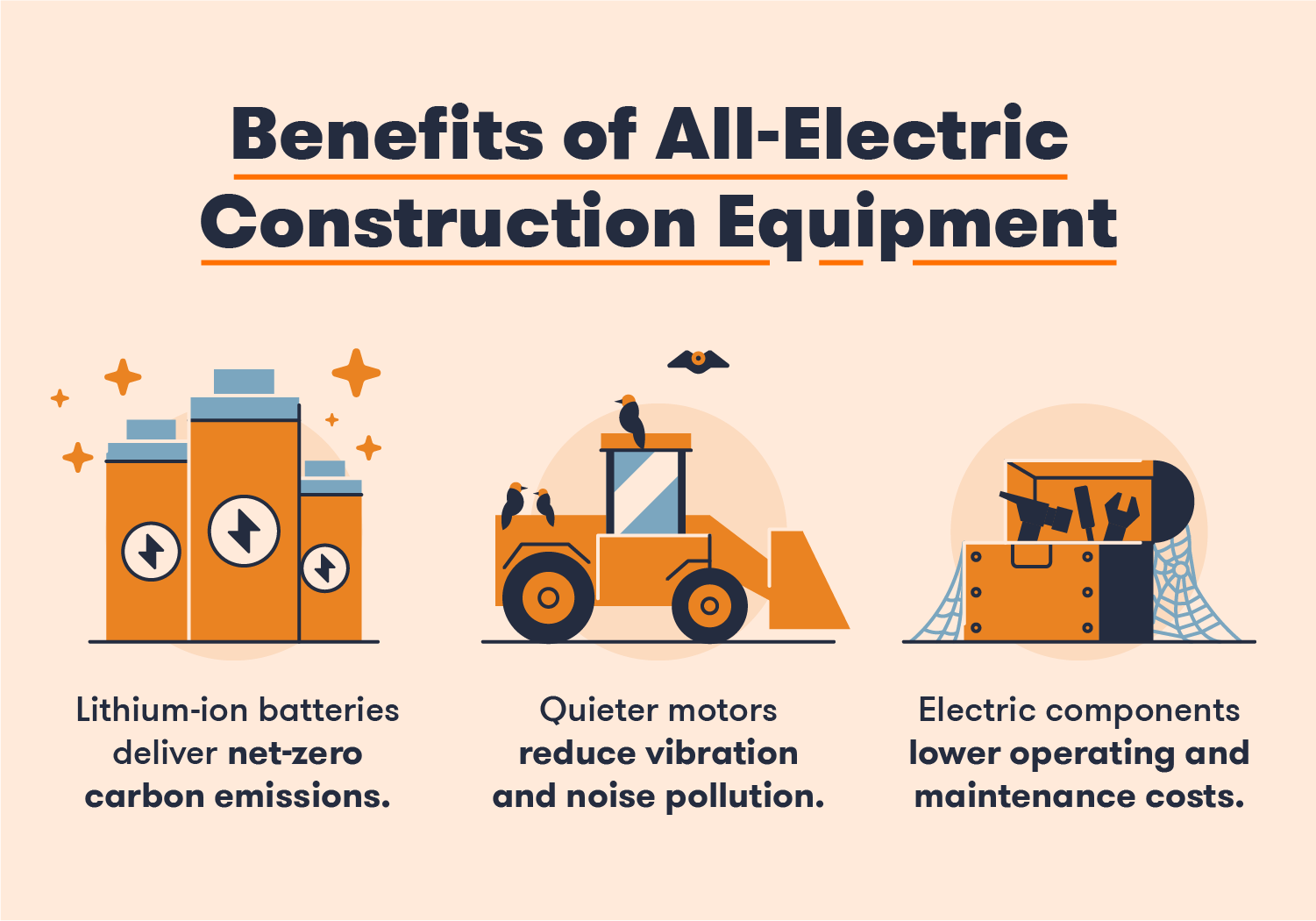 Because electric construction equipment doesn’t rely on gasoline or diesel fuel, it delivers net-zero carbon emissions and promotes sustainable construction practices. This is a much-needed benefit — the construction industry currently accounts for about 39% of the world’s CO2 emissions related to energy, and it is notoriously slow to adopt greener technologies.

All-electric machinery relies on lithium-ion batteries, effectively eliminating the need for fossil fuels. These battery-powered machines are a must for companies working in emission-restricted areas that prohibit the use of diesel-powered machines.

Noise pollution is a widespread issue in the construction industry. Loud machinery not only creates unwanted noise for those living and working near construction sites, but also jeopardizes the health of construction workers who are regularly exposed to it. Exposure to constant noise over 85 dB for more than eight hours can be hazardous, and construction workers are most at risk.

Fortunately, electric construction equipment is much quieter than traditional diesel-fueled machines. Because electric equipment lacks a diesel engine and cooling fan, it comes with less noise and fewer vibrations. This makes machines safer to operate and leaves construction workers feeling less fatigued at the end of the day.

Electric construction equipment comes with the added benefit of reducing long-term costs for construction companies. All-electric equipment not only eliminates fuel costs but also reduces overall operating costs thanks to its lower engine run time. With diesel-powered equipment, a lot of engine run time accumulates while the machine is idle. Electric equipment, on the other hand, turns off as soon as the operator stops the machine, and no additional operating time accumulates.

The construction industry is often slow to adopt new technology, so not all machines currently have an electric model on the market. However, equipment manufacturers are gradually rolling out new models as the technology advances. The types of electric equipment currently available to rent, buy or pre-order include: 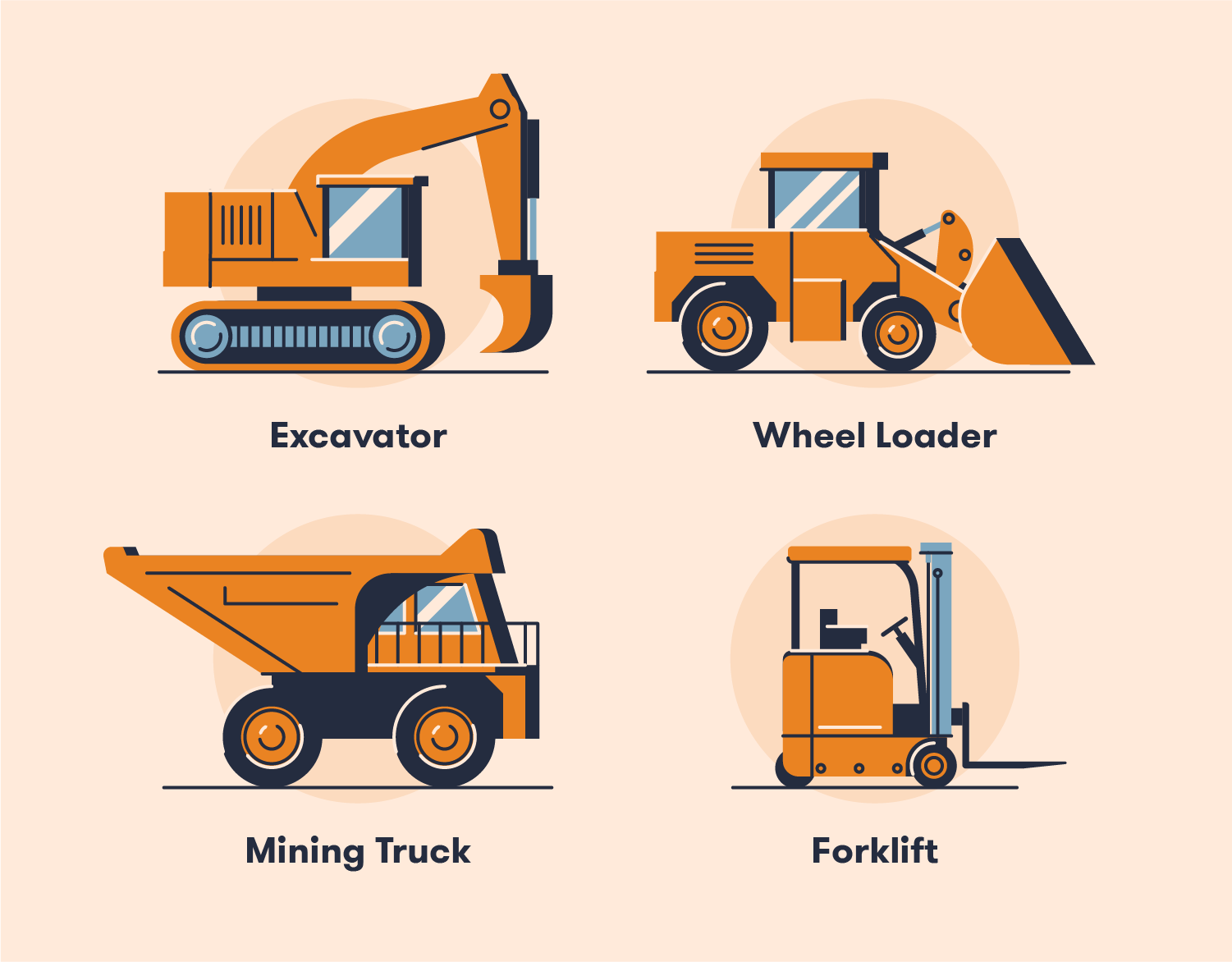 Electric excavators were one of the first all-electric machines to make a public debut. In 2017, Volvo CE revealed its EX02 compact electric excavator prototype at the Volvo Group Innovation Summit. The EX02 produced zero emissions and contained two lithium-ion batteries in place of a traditional combustion engine. The batteries totaled 38 kWh, providing the machine with enough energy to dig for eight hours between charges.

While the EX02 model was just a prototype that never became available for commercial use, Volvo CE has since revealed the ECR25 Electric excavator. This model is currently available for pre-booking in the U.S. and Canada, and the company plans to roll out the first deliveries in June 2022.

Companies like Caterpillar, Bobcat, Doosan, Hyundai CE and JCB have also introduced electric excavators in recent years, and the trend is likely to continue as demand for all-electric heavy machinery increases.

Because wheel loaders come in multiple sizes and styles and are found on most construction sites, equipment manufacturers were quick to develop all-electric models. Volvo CE added the L25 Electric compact wheel loader to its all-electric lineup, and companies like Wacker Neuson and Schäffer unveiled their own models within the last five years.

The Schäffer 24E, advertised as the world’s first electric wheel loader using lithium-ion technology, is powered by two lithium-ion batteries and contains two hydraulic motors. The machine is small and quiet, making it perfect for maintenance jobs in noise-sensitive residential areas. Its lightweight design allows it to be easily loaded onto a car trailer, and it can be easily transported between construction sites.

The world’s largest electric vehicle is a 45-ton mining truck designed by the German manufacturer Kuhn Schweiz. This all-electric truck, officially named the Elektro Dumper, is used to transport marlstone, and it never needs to be recharged thanks to its regenerative braking system. When the truck descends a hill, the braking system recaptures energy created by the downhill movement and stores it in the truck’s 600 kW per hour battery pack.

While the Elektro Dumper is currently a one-of-a-kind machine, other equipment manufacturers have released their own versions of the electric mining truck. Epiroc, for example, offers a battery-powered mine truck designed for underground applications.

The market is slowly becoming more competitive for electric forklift manufacturers as more products enter the market. In an attempt to stay ahead of the competition, Cat equipped its line of electric lift trucks with built-in service reminders, on-the-go system monitoring and self-diagnostics technology. Greenland Technologies also recently launched a new line of electric lithium forklifts, and deliveries will start in September 2021 for North American buyers.

The Future Is All-Electric

Electric construction equipment is still in its infancy in the U.S., but that is likely to change over the next few decades. In 2004, the Environmental Protection Agency (EPA) released the Tier 4 final stage of its approach to reduce carbon emissions, limiting new diesel engines to near-zero emissions levels for nitrogen oxides and particulate matter. This resulted in a surge of new hybrid equipment that reduced emissions while still delivering the same performance as previous models. 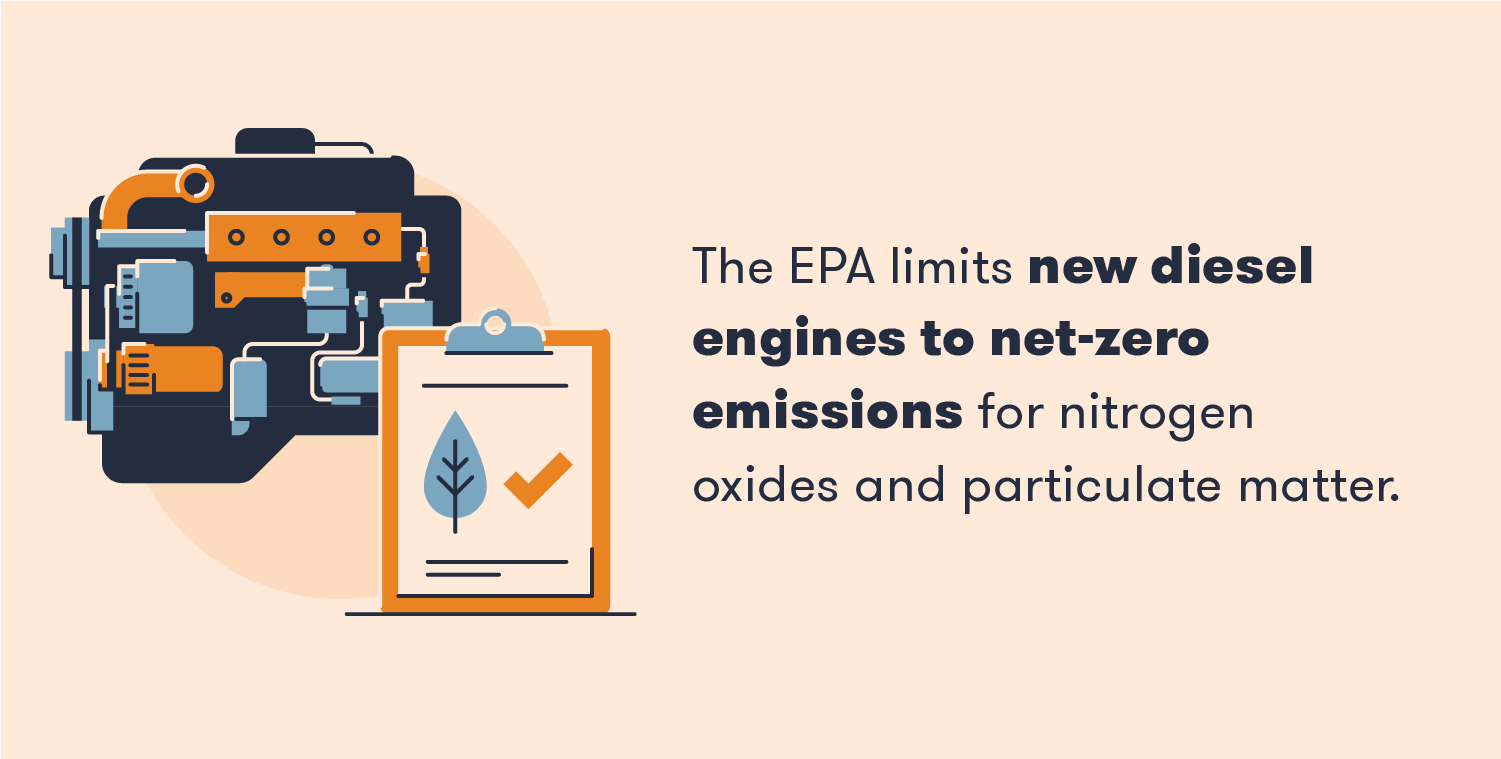 While the EPA isn’t currently planning to release more stages, the European Union moved forward with Stage V non-road emissions standards in 2016 to further restrict emissions of particulate matter. These changes could spur future restrictions, and many equipment manufacturers are working to stay ahead.

An all-electric future for the construction industry may seem unrealistic, but it isn’t completely out of reach. The auto industry, for example, is already pushing for the transition to electric vehicles. Norway, Denmark, Iceland and other countries in the EU have announced plans to ban the sale of gas- and diesel-powered cars by as early as 2025, and more countries are quickly following suit.

All-electric construction equipment has already proven that it can keep up with diesel-powered machines while reducing costs and emissions. Next time you need to rent out a forklift, wheel loader or other type of construction equipment, consider opting for a hybrid or electric model. It will reduce your project costs and help lead the construction industry to a quieter, greener future.

How To Operate a Scissor Lift
How Much Does It Cost to Rent a Skid Steer?
Bulldozer Types, Parts and Their Uses
11 Types of Cranes Commonly Used in Construction
How Air Compressors Work: An Animated Guide
How to Use a Pallet Jack: A Step-by-Step Guide
Illegal Dumping Facts and the Consequences of Carelessness
Generator Maintenance Checklist
Top Mini Excavator Brands To Know for 2022
How Do Generators Work?