Tracks or Wheels: Which Are Better on a Skid Steer Loader? 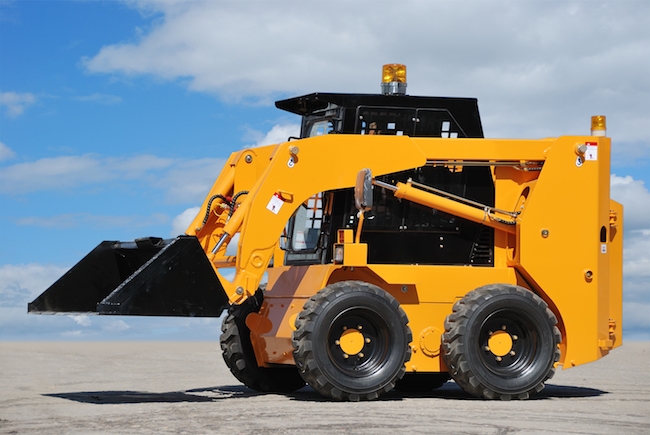 A skid steer loader, also called a skid steer or nicknamed a bobcat, is a small engine-powered construction machine used on a variety of job sites. Skid steers can move soil on a building site, dig holes, help with landscaping gardens, clean stalls on a farm, and more tasks. Some skid steers have tracks and are often called compact track loaders. Other skid-steer loaders have wheels.

The two different types of skid steers suit different jobs and job sites. With two different options available, you may be wondering which is better on a skid steer: tracks or wheels. We compare skid steers with tracks and wheels to help you make a choice.

Wheels Work Best on Even Ground

When you’re working on even, hard ground, skid steers with wheels are the superior choice. Wheels don’t like to be challenged too much. They thrive on paved ground, concrete areas, and landscaped sites. That’s why you’ll usually see skid steers with wheels on renovations and extensions instead of new building sites. On these developed surfaces, the extra traction of a skid steer with tracks gets wasted.

Skid steers with tracks are also slower to move on a developed ground than varieties with wheels, and faster-wheeled machines are more efficient on flat ground job sites. Wheels also wear less on hard surfaces than tracks will. Skid steers with tracks call for regular replacement of tracks, bogey wheels, sprockets, and other components. These parts will naturally wear out more quickly over hard surfaces, such as pavers or concrete, than softer surfaces.

“While uneven terrain, slopes, and muddy or snowy ground conditions can be very challenging and tough on skid-steer loaders, compact track loaders are designed and built to handle these types of conditions,” confirmed Rick Harris, senior product manager of Terex Construction, in an interview with Forester Daily News.

Bob Beesley, a product manager for Komatsu, recalled driving one of the company’s skid steers with tracks into an area with soft ground. He got out of the machine and sank to his knees in the soil. However, the skid steer stayed afloat.

Skid steers with tracks do well where wheels can’t because they disperse their weight over a larger surface area. This weight distribution improves their stability.

Skid steers with tracks won’t simply move over a challenging terrain. They’re also easy to maneuver in less than perfect conditions. When you need to steer through narrow clearings between trees, for example, a skid steer with tracks has you covered.

Tracks Can Work Under Any Conditions

Skid steers with tracks are a relatively new addition to the marketplace. However, their versatile nature has helped them claim 30 percent of the skid steer market, as Chris Giorgianni, vice president of product support government and defense for JCB, told Forester Daily News.

People who rent skid steers don’t have to worry about choosing a versatile machine. They can simply rent the right skid steer for any given project.

You can also buy tracks to put over the tires of skid steers with wheels. This add-on will help your skid steer with wheels tackle the type of tough terrain it’s not usually suited for. Slip-on tracks usually cost between $2,000 and $5,000, and you can install and remove them in 30 minutes. The price depends on variables including the following:

Think carefully about the type of over-the-tire tracks you choose.

“Over-the-tire steel tracks can add productivity to existing equipment, but they can also damage sidewalks and curbs,” Mike Fitzgerald, a loader product specialist for Bobcat, explained to Total Landscape Care magazine. “You want to use rubber tracks in areas under development, which have improved surfaces, and use steel tracks in areas that are primarily dirt or new construction.”

Tires cost less to replace than tracks. However, they don’t last quite as long. A new set of skid steer wheels usually costs between $600 and $1,000, stated Total Landscaping Care magazine. Depending on their quality, skid steer tires usually last between 600 and 1,000 hours. Rubber tracks last longer, between 1,200 and 1,600 hours. But they are pricier, usually costing $3,000 to $4,500 per set.

Since tracks can work in a wider range of conditions, they can be more productive. This greater productivity can offset their higher purchase and running costs. However, for businesses operating on a shoestring budget, the upfront costs may be the most important. In fact, we’ve seen a swing back to cheaper skid steers with wheels after the global financial crisis, according to Jamie Wright, product manager for Terex Construction Americas.

You can repair the ruts that skid steers with wheels leave behind. However, fixing the impact of wheeled skid steers takes more time and effort. Repair and cleanup can keep your crew on the job site for longer, which means they won’t be working as efficiently.

Skid steers with tracks need more maintenance than wheeled skid steers do. When you own a skid steer with tracks, you’ll spend much time cleaning the undercarriage and checking track tension.

Thorough maintenance is essential for lengthening a skid steer’s life. However, some equipment operators can find the level of maintenance needed for skid steers with tracks inconvenient. If you rent your skid steer, the rental company will take care of much of that maintenance for you.

Whether you want a skid steer with tracks or wheels, BigRentz has you covered. For more about skid steers, visit the BigRentz website to read more about our skid steers and rent the one that best suits your needs.

How Do Generators Work?
What Size Telehandler Do I Need?
Keeping Seniors and Special Needs Individuals Safe Around Construction
How to Dig a Trench Really Fast
Articulating vs. Telescoping Boom Lifts: What's the Difference?
How to Build an Epic Ninja-Style Obstacle Course in Your Backyard
How To Get Forklift Certified + Common FAQs
How to Choose a Forklift and Available Attachments
Forklift Mast Types: How to Choose the Right One
The Best Equipment To Clear Land and Brush
Equipment Skid Steer Share this article: